A City Upon a Hill by John Winthrop

In John Winthrop’s essay “City Upon a Hill”, Winthrop expresses his distinct views on the aims of the Puritans coming to New England.

During the early 17th century in Europe, some groups separated from the Church of England. These groups were known as the Pilgrims, who founded Plymouth Colony in 1620. This religion had a direct impact on religious ideas and culture in America. John Winthrop acquired a royal charter from King Charles I and created the Massachusetts Bay Colony. “City Upon a Hill” was written on the ship during the first mass Puritan migration to New England. This document provided the followers with a plan regarding their goals upon arriving in America. Winthrop firmly believes that the people who are willing to be fully devoted to God must start a new life in America and be unified and come together as one.

Winthrop has very comprehensive ambitions for the immigrating Puritans. He wants their religion to be a “City Upon a Hill”, or a model for other Christian churches.

Winthrop is planning a rather perfect society in which everyone is 100 percent devoted to their religion and God. He tells the Puritans that they are a part of a special pact with God to create a holy community that serves as an example to the Christian world. He states that all of his followers will be “knit together in this work, as one man” and “rejoice together, mourn together, labor and suffer together…”. Also saying that unity and peace will bring them closer to god, he is obviously confident that the people will do whatever it takes in order to become this perfect unified religion.

This new society would be more than just a safe haven for Puritans; it would be a new religious land altogether and a basis for the formation and development of the New World.

Winthrop assumes in this sermon that a handful of the followers will not stay true to god. If they fail to be devout puritans by for example not praying every day or not going to church weekly, the lord will “break out in wrath against them”. In the document, he also says that anyone who does not exhibit a strong love for God will be “revenged”. He stresses throughout the essay that the settlers who are willing to be involved in this “mission” must put their whole life into it and come together as one if they want their religion to succeed as a model for other Christian churches throughout the world. Winthrop says that God will help them in their times of need, and bless them in return for their faith in him.

The author uses biblical references such as Nadab and Abihu. He uses this to show the consequences of innovation in worship. They were blessed by God until there were transgressions including their unauthorized entry into the “Holy of Holies”, lack of reverence, and intoxication. The Lord had given them clear instructions on how to do something, but Nadab and Abihu decided to disobey him do it in their own choosing. He references them to give an example of sinning against the Lord. Another biblical reference Winthrop makes is Saul and Amaleck, in which Saul makes a great mistake that denies him his kingdom and results in his downfall. Winthrop mentions this because he is trying to convey that the settlers are required to obey the Lord’s wishes at all times.

Throughout the sermon, John Winthrop makes himself very clear about what he wants the Massachusetts Bay Colony to accomplish when he establishes it. He desires it to be a strictly religious society that will act as an example for the rest of the colonies. Winthrop lays out a plan of exactly how he wants the colonists to act as. He assumes that some will not be able to fulfill these tasks, and states that whoever does not devote their life to the religion will anger God. Winthrop’s views and goals for the new colony are undoubtedly presented very clearly in “A City Upon a Hill.”

A City Upon a Hill by John Winthrop. (2017, Mar 01). Retrieved from http://studymoose.com/a-city-upon-a-hill-by-john-winthrop-essay 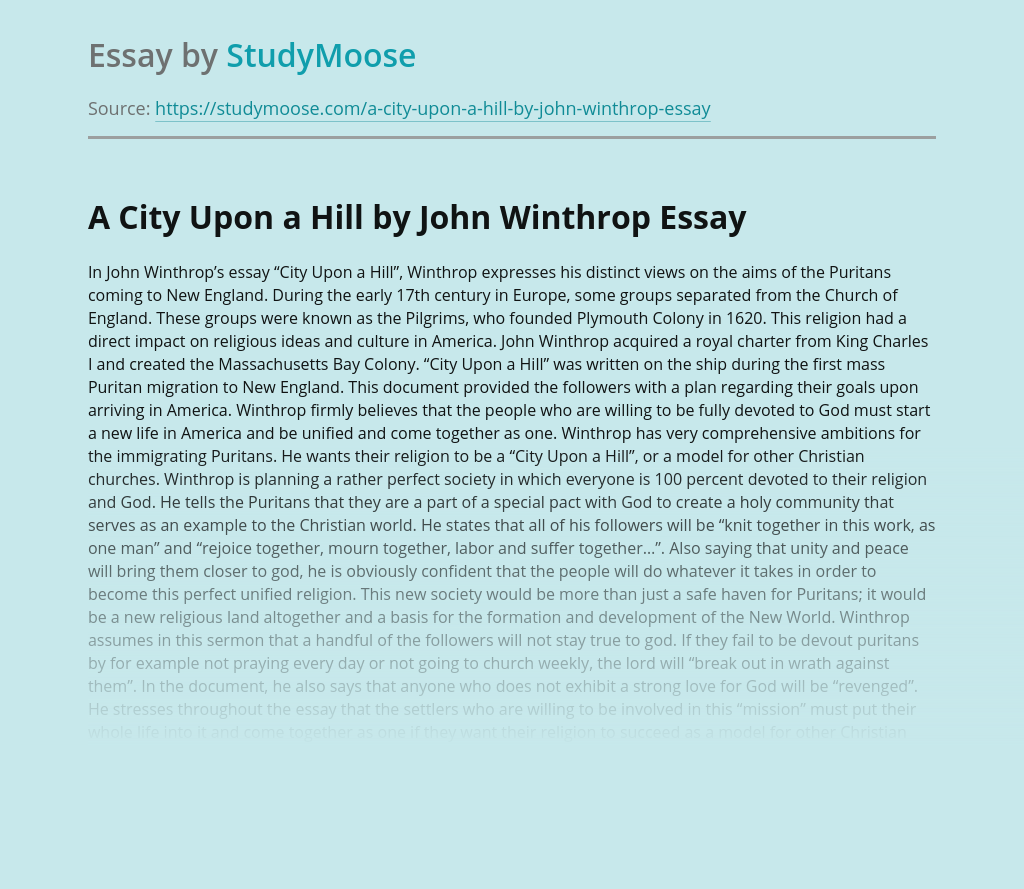 Don’t waste time
Get a verified writer to help you with A City Upon a Hill by John Winthrop
Hire verified writer
$35.80 for a 2-page paper
Stay Safe, Stay Original