Colonization of America by Bradford and Winthrop

William Bradford was one of the leaders of colonial America. Bradford arrived at Cape Cod on November 11, 1620, on the flagship Mayflower. He was one of the authors of The Mayflower Compact. His greatest contribution to early writing is his History of Plymouth Plantation, 1620-1647. Bradford and Winthrop both demonstrate an exegetical habit of mind. In their different ways, both Bradford and Winthrop and Bradford demonstrate that the Puritans see themselves creating a new center in the New World, from which their values would radiate outward.

Don’t waste time
Get a verified writer to help you with Colonization of America by Bradford and Winthrop
Hire verified writer
$35.80 for a 2-page paper

William Bradford ‘s history of the Pilgrims, in Of Plymouth Plantation, sheds a uniquely different light on life in colonial New England. Bradford ‘s account depicts many hardships that had to be overcome by the Pilgrims, before their ideal land began to take shape. Bradford describes arriving in New England in the late fall as fatal for many of the Pilgrims. The first winter took its toll on the colonists. Forced to live on the boat, many people died of scurvy or starved.

When they finally were able to stay on land, they found the Indians less than sociable, and the land too rugged to develop large farms.

The Pilgrims kept their faith though, and with time, the Lord blessed them. They made a pact with the Indians, learned how to grow native crops, and developed industries. William Bradford believed that God helped them through His bountiful grace, and turned the New England wilderness into a Heavenly Paradise. Some factors that will be considered include: how Puritan beliefs affect William Bradford ‘s interpretation of events, the representation of Puritan theology in the above mentioned text, and how Puritanism forms the basis for Bradford ‘s motivation in writing.

In Bradford ‘s text, there are numerous instances in which his beliefs affect his interpretation of what happens. In Chapter IX (nine) of “Of Plymouth Plantation”, entitled “Of Their Voyage…”, Bradford tells of another ship passenger named John Howland. At one point in the trip, the Mayflower came upon a violent storm. The winds of the storm were so fierce, and the seas were so high, that all the sailors and passengers had to “hull for divers days together”. During this storm, a young man named John Howland was thrown into the sea, and as Bradford tells us, “it pleased God that he caught hold of the topsail halyards which hung overboard and ran out at length”.

Howland caught hold of a rope, and “though he was sundry fathoms under water”, he held on until he was hauled up. Bradford reasons that the man was saved because he was blessed by God. He goes on to say that he “became a profitable member in both church and state, implying that John Howland was one of the so called “Puritan Saints”. To the Puritans, Saints were people whom God was to save, so these people received God’s blessings, and therefore were profitable in Puritan society Representation of Puritan theology is also heavily prevalent in Bradford ‘s “Of Plymouth Plantation”.

Included in Bradford ‘s writing are numerous Bible quotes, and praises to God for anything going right during the Puritans voyage. In the chapter called “On Their Voyage…”, Bradford tells of the condition of their ship. Due to the number of storms encountered during the voyage, “the ship was shroudly shaken, and her upper works made very leaky; and one of the main beams in the midships was bowed and cracked, which put them in some fear that the ship could not be able to perform the voyage.”

After much consideration by the mariners, they decided to continue on with the voyage, rather than turning back to England. As Bradford put it, “So they committed themselves to the will of God and resolved to proceed.” Also in the same section, after they landed “they fell upon their knees, and blessed the God of Heaven who had brought them over the vast and furious ocean, and delivered them from….”

Throughout the whole piece, there is much praise for God, and numerous bible quotes from Bradford. Many of the reasons for Bradford writing “Of Plymouth Plantation” stems from his Puritan beliefs. For one, he wanted to establish a link between his Mayflower group (the group that traveled over the sea), and all future groups of Puritans. Right at the end of Chapter IX (“On TheirVoyage…”), right at the end of the section, Bradford gives us a speech. He begins, “May not ought the children of these fathers rightly say “. Our fathers were Englishmen which came over this great ocean, and were ready to perish in this wilderness; but they cried unto the Lord, and He heard their voices and looked on their adversity” etc. Let them therefore praise the Lord.” He wanted to show that what his group did was “great”. They endured the persecution of the Anglicans in England, and then sailed over an ocean to an untamed land, and established a colony.

Bradford ‘s story is one of hardship; the kind of hardship that the Puritans believe shows God is testing them. Bradford wants the future Puritans to never forget the hardships that his group had to endure. Bradford has a sense that what his first group of Puritans did was grand, and thus he wants to justify the acts of his group. Bradford also wants to quell any questions or fears that any investors might have had.

Bradford ‘s Puritan background influences a great deal of “Of Plymouth Plantation”. His beliefs sometimes affect his interpretation of events, as in his telling us of Thomas Morton. His Puritan beliefs also form the basis of the purpose of his writing. Still, Bradford manages to accomplish a great deal in this writing. He does immortalize the struggles of his Puritan camp at Plymouth, and he does a good job of accurately depicting the events during those same struggles.

One of the founders of the Massachusetts Bay Colony, Winthrop arrived in 1630 aboard the flagship Arbella. As governor of the Colony, he established the center of government at Boston. Winthrop began writing his Journal in 1630 and continued it till his death. On board the Arbella, he prepared his famous sermon “A Model of Christian Charity.”

While en route to the New World on board the Arabella, John Winthrop wrote a sermon entitled “A Model of Christian Charity,”(The Norton anthology, 107) in which he outlined the purposes of God for New England. Winthrop had a deep understanding of God’s divine purposes for the colony. “We shall be a city set on a hill,” he said of Boston – where the church was the center of life during those early years of the city’s history. He described a harmonious Christian community whose laws and government would logically proceed from a godly and purposeful arrangement.

John Winthrop also believed that this new form of government would help bring about a “Golden Age” and that one day all the nations of the world would copy this form of government: “We shall find that the God of Israel shall be among us, when ten of us shall be able to resist a thousand of our enemies; when He shall make us a praise and glory that men shall say of succeeding plantations, ‘the Lord make it like that of New England.'”

But Winthrop also gave a warning: “The eyes of all people are upon us, so that if we deal falsely with our God in this work we have undertaken, and so cause us to withdraw His present help from us, we shall be made a story and a byword through the world.” Winthrop set out clearly the revealed purposes of God and warned that the success or failure of their endeavors would depend on their dedication to the ideal of selfless community. History shows us that this ideal was never realized, however, Winthrop laid the foundation for generations yet to come.

Colonization of America by Bradford and Winthrop. (2016, Jun 19). Retrieved from http://studymoose.com/colonization-of-america-by-bradford-and-winthrop-essay 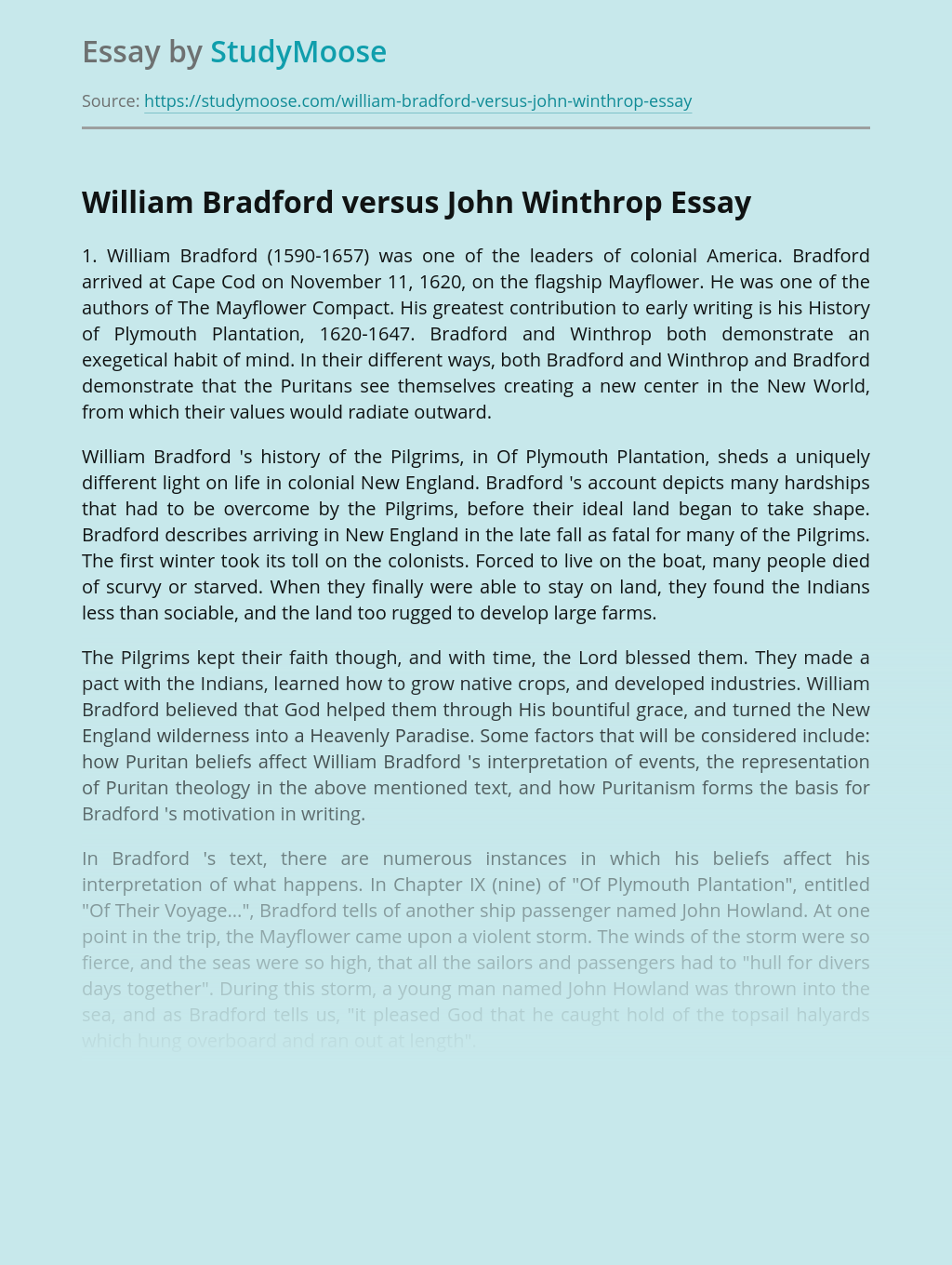 Don’t waste time
Get a verified writer to help you with Colonization of America by Bradford and Winthrop
Hire verified writer
$35.80 for a 2-page paper
Stay Safe, Stay Original