John Smith was born into a farmer’s family in 1580. At the age of fifteen he was an apprentice for a shop keeper. After his fathers’ death, he joined the military and then became enslaved. After killing his master, he followed his dreams of exploration. Meanwhile, William Bradford, also, was born into a farmer’s family in 1590. As a teenager Bradford joined a religious group. Both men came from farming families in England and were inspired as teenagers. John Smith was inspired by tales of adventure and exploration, while William Bradford was inspired by the sermons of a minister.

Don't use plagiarized sources. Get your custom essay on
“ John Smith vs. William Bradford ”
Get custom paper
NEW! smart matching with writer

John Smith and William Bradford had some similarities in their backgrounds, goals in colonizing successfully, and following their passions; but they had very different motivations. Smith and Bradford were both leaders and shared a similar goal of successfully colonizing in America, and they both viewed the new world as a land of opportunity and dreams, although their motives were very different. Smith wanted adventure and fame, while Bradford sought for religious freedom and spreading the word of God.

Smith and Bradford have many differences but both of their writings give us insight to what America was like over four hundred years ago. John Smith was a major player in the colonization of America for England. His writings were intended for an England audience and his stories of captivity and rescue give America its’ first adventure story.

In his writings he gives detailed maps of Virginia and adventurous tales, which gave him the fame he was seeking.

He talks about how “such extreme weakness and sickness oppressed”(83) the colony. Then Smith goes on about how he lost his men to the Indians and was taken captive. He gives detailed descriptions of the places he was taken and the people he met while in captivity. He credits his rescue to Pocahontas, the daughter of the Chief of the Chesapeake Bay. “Pocahontas, the King’s dearest daughter, when no entreaty could prevail, got his head in her arms and laid her own upon his to save him from death”(90). Many of these accounts seem to make Smith out to be quite valiant and heroic. Bradford was also a major player in colonization of America for England. His writings were to give an account of his experiences. He seeks no fame but to only religious freedom from the Church of England and spreading Gods word. He does this in his writings by giving examples of Gods’ will from the healthy man being thrown overboard for his discrimination against the poor and sick to the success of the colony. He is motivated by his faith and his writings reflect this, but most importantly his writings paint a picture of what life was like in Plymouth. In conclusion, Smith’s perception of the new world and opportunities there seem to be quite romanticized in contrast to Bradford’s more humble and spiritual motivations, such as submission to God. Although some similarities exist between the backgrounds of Smith and Bradford, the differences in the perceptions and motivations of both give us wonderful examples of how a picture of this time can be presented today in two very different perspectives. 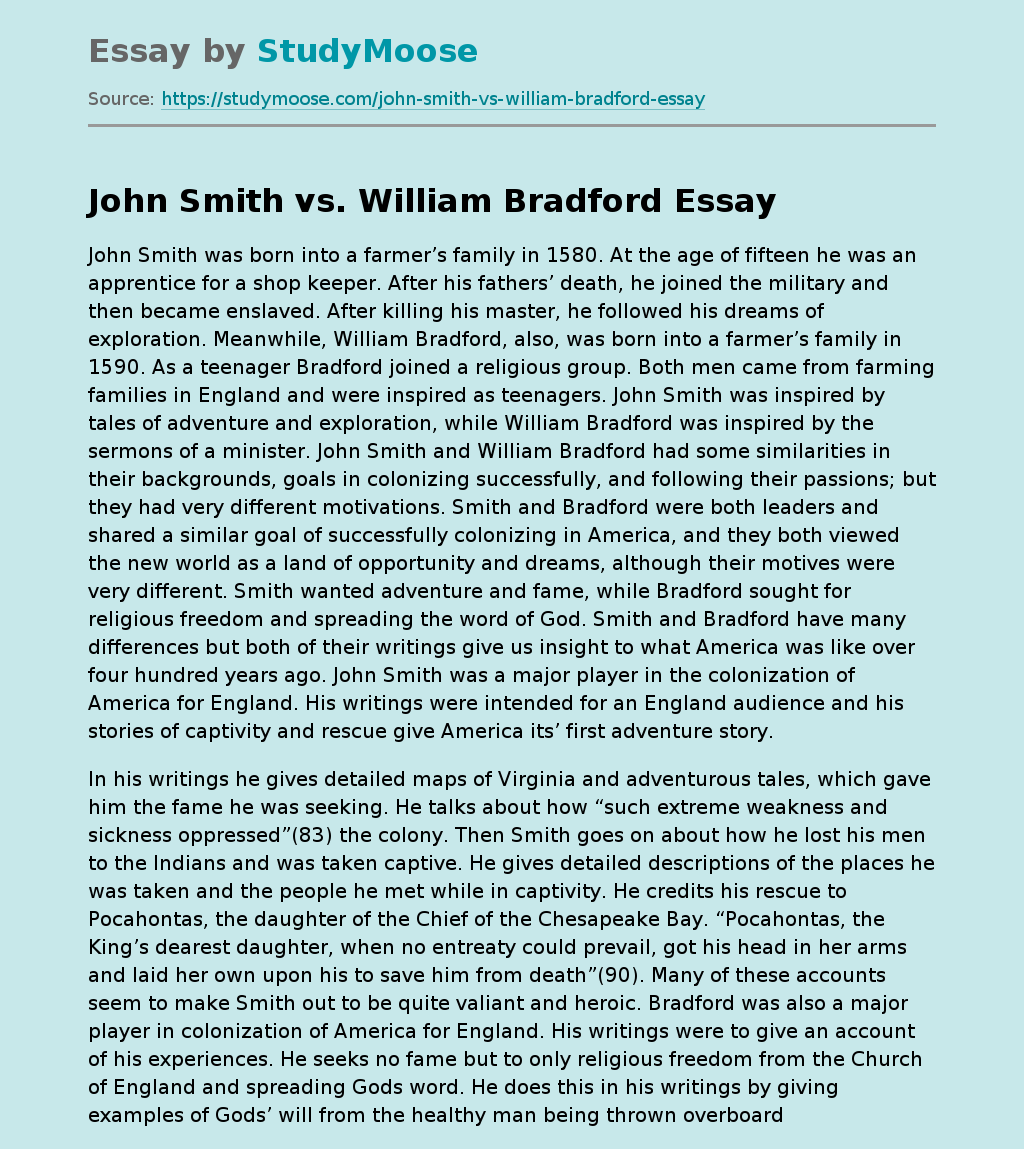