Powhatan, “Speech to Captain John Smith,” The World Turned Upside Down. Boston: Bedford, 1994. The message that Powhatan delivered to John Smith in his speech was one of peace. Powhatan told John Smith that he has seen three generations of his people die. The Chief told John Smith that he has seen many years of war and peace. Powhatan explained that he was getting old and tired. He was concerned that his successors did not have the experience or wisdom to deal with the relationships between the Indians and the European settlers.

Don't use plagiarized sources. Get your custom essay on
“ Powhatan, “Speech to Captain John Smith,” The World Turned Upside Down. Boston: Bedford, 1994 ”
Get custom paper
NEW! smart matching with writer

His hope was that the relationship would be built on love and respect. However, he felt that this reality was not possible, due to the current circumstances at the time. Powhatan pleaded with John Smith, explaining to him that his people were afraid due to what they heard from the Nandsamund tribe. Powhatan could not understand why the Settlers wanted to disarm them and leave them defenseless when they were feeding them.

He told John Smith that he was wise enough to understand that a mutually beneficial relationship would be best for everyone. Powhatan went on to say that the alternative to peace would be starvation, sleepless nights, and the anxiety of not knowing when they would be attacked.

The European Settlers would fall to the same fate because of their selfishness and lack of cooperation with Powhatan’s people. Finally, Powhatan told John Smith that it is his responsibility to influence the settlers to engage in peaceful trade with the Indians.

The consequence of tyranny from the settlers would result in both sides losing. Powhatan’s speech to John Smith was about change through peace. Powhatan was really concerned that the settlers did not intend to engage in peaceful trade with the Indian peoples.

He feared that his successors would not be as understanding or wise enough to cultivate reliance between the two cultures. This speech is historic because it is one of the first noted interactions between the Indians and the Jamestown settlement. This speech is important, as it addresses the future problems for the Indians, due to an influx of European settlement. Powhatan message to John Smith was delivered to him with a hope of change for generations to come. 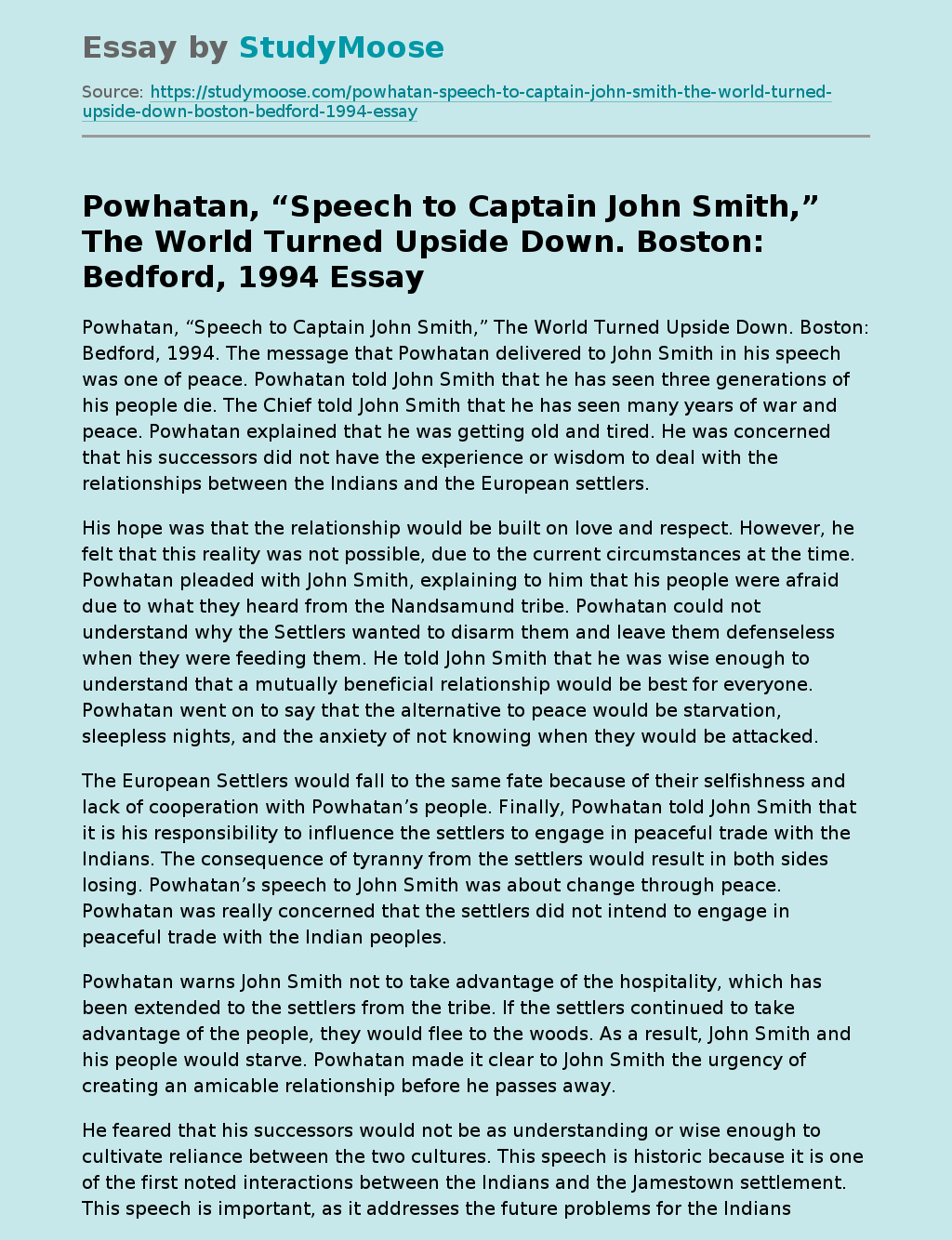