Should Cigarettes Be Banned

Cigarettes have caused around 5 million deaths, which is 8 people dying each minute. Therefore cigarettes should be banned as they don’t just do physical damage but also moral damage. However banning cigarettes might lead to more criminal offense. Cigarettes have become a serial killer and have brought to people several different illnesses. The ingredients in a cigarette are so bad for you that they can kill a large rat in a matter of minutes.

Did you know we inhale over 4,000 different types of chemicals when we smoke and 51 of them cause cancer? .

Don't use plagiarized sources. Get your custom essay on
“ Should Cigarettes Be Banned ”
Get custom paper
NEW! smart matching with writer

90% of lung cancer deaths are caused by smoking and the increased health risks can be as much as 23 times higher than a normal person. There are many ads to try and persuade you not to smoke and inform people about the dangers of smoking. For example: “It’s not their choice to smoke it’s their choice to live, and have freedom to go out. ” and “Cigarettes takes your life and then kills you”.

But the addiction still can’t be wiped away. This is why cigarettes have become so destructive and harmful to not only us but also to our society.

However, bans for other products have not been effective but led to more criminal offense. If smoking was banned the consumers who were unable to quit smoking would be forced into buying black market cigarettes therefore being sent to prison. People would go crazy as they can’t consume the things they are addicted to and their body would allow them to cause many more criminal activity.

For example on last week’s paper a cargo was found filled with tomato cans but instead it was filled with speed.

The person was charged for 18 years of jail but it is not enough for all the actions that he has done. Most of the drugs sold illegally in Australia are sold by the bikie gangs such as the “Hells Angels”. These people have made the ban of cigarettes very difficult to make an effect on the society as they can still get the product even if it is illegal. Even though banning cigarettes can be extremely hard but it is done for the good of the people. Banning cigarettes can be tough as many people in the society are addicted to it and will go crazy without it.

But they would also find anyway to obtain cigarettes no matter where it is from and if it breaking the law or not. Nevertheless, the banning of cigarettes is not only helping them physically but also morally. Cigarettes can cause massive damage to our health, from ugly rotten teeth to life taking cancer; cigarettes have become a murderer of our lives. This is why no matter how hard it is to ban cigarettes we still have to do it for the health and safety of the people. Finally cigarettes should be banned but it might be difficult as there are many obstacles in the way.

Should Cigarettes Be Banned. (2016, Sep 12). Retrieved from https://studymoose.com/should-cigarettes-be-banned-essay 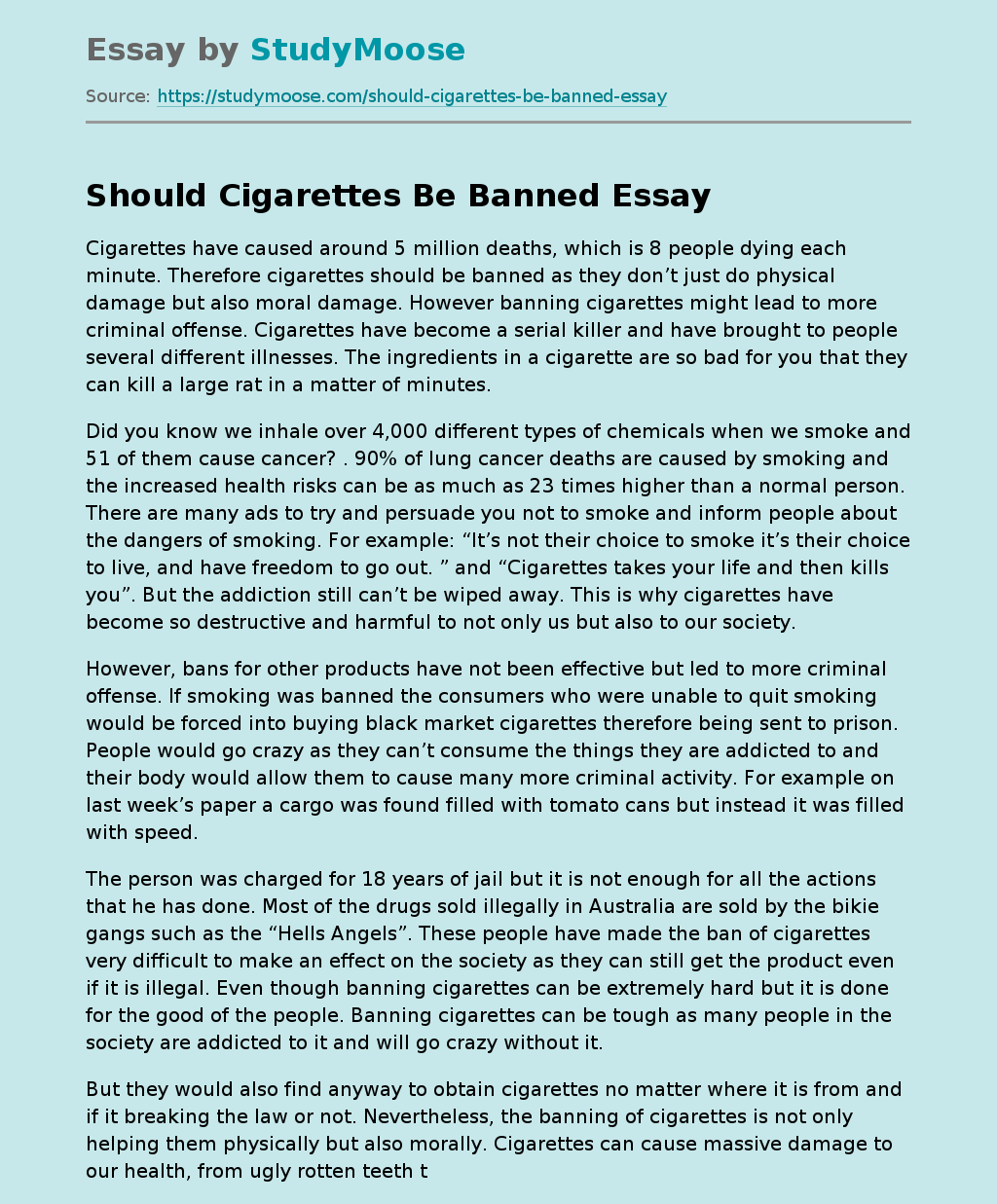