What It’s Like to Be a Black Girl by Patricia Smith?

Don't use plagiarized sources. Get your custom essay on
“ What It’s Like to Be a Black Girl by Patricia Smith? ”
Get custom paper
NEW! smart matching with writer

Both the poem and the short story discus love or the feeling of love the short story states, “One summer afternoon when there was water flowing there and it was very hot she waded in as they used to do when they were children, her dress bunched modestly and tucked into the legs of her pants. The schoolgirls he went swimming with at dams or pools on neighbouring farms wore bikinis but the sight of their dazzling bellies and thighs in the sunlight had never made him feel what he felt now when the girl came up the bank and sat beside him, the drops of water beading off her dark legs the only points of light in the earth–smelling deep shade.

They were not afraid of one another, they had known one another always; he did with her what he had done that time in the storeroom at the wedding, and this time it was so lovely, so lovely, he was surprised .

. . and she was surprised by it, too—he could see in her dark face that was part of the shade, with her big dark eyes, shiny as soft water, watching him attentively: as she had when they used to huddle over their teams of mud oxen, as she had when he told her about detention weekends at school.

They went to the river–bed often through those summer holidays. They met just before the light went, as it does quite quickly, and each returned home with the dark—she to her mother’s hut, he to the farmhouse—in time for the evening meal. He did not tell her about school or town any more. She did not ask questions any longer. He told her, each time, when they would meet again. Once or twice it was very early in the morning; the lowing of the cows being driven to graze came to them where they lay, dividing them with unspoken recognition of the sound read in their two pairs of eyes, opening so close to each other.” (pg 45 Clugston)

The poem What It’s Like to Be a Black Girl by Patricia Smith states, “it’s finally having a man reach out for you then caving in around his fingers.” (pg 267 Clugston) These statements show that both of these literary works talk about love and the feeling of what love is like or what kind of love is wanted. Even though both these pieces are talking about ethnicity any person wants to have these feeling no matter what the race or ethnicity a person is. Both statements are saying that the feelings of being wanted and cared about are strong and important during a woman’s life not just a black woman’s life.

The short story Country Lovers by Nadine Gordimer says, “It was in one of these that she and the farmer’s son stayed together whole nights almost: she had to get away before the house servants, who knew her, came in at dawn. There was a risk someone would discover her or traces of her presence if he took her to his own bedroom, (pg 46 Clugston) this passage of the short story is talking about making love and or having sex. What It’s Like to Be a Black Girl by Patricia Smith says, “it’s learning to say fuck with grace but learning to fuck without it” (pg 267 Clugston). Once again this statement is talking about having sex and possibly making love.

The poem is a much broader example by using the work fuck has many different meanings, “to have sexual intercourse with. To treat unfairly or harshly, to act stupidly or carelessly; cause trouble; mess up. The word fuck and some of its derivatives have increasingly crept into casual use, not only as expletives of shock, horror, or anger—or even pleasant surprise—but as verbal tics, indices of mere annoyance or impatience: Where are my fucking keys? What the fuck do you want now? Yet for many people, the word remains vulgar, improper, and utterly taboo.” Dictionary.com

Country Lovers by Nadine Gordimer speaks of the differences of the black children, “The farm children play together when they are small, but once the white children go away to school they soon don’t play together any more, even in the holidays. Although most of the black children get some sort of schooling, they drop every year farther behind the grades passed by the white children; the childish vocabulary, the child’s exploration of the adventurous possibilities of dam, koppies, mealie lands, and veld—there comes a time when the white children have surpassed these with the vocabulary of boarding–school and the possibilities of inter–school sports matches and the kind of adventures seen at the cinema.

This usefully coincides with the age of twelve or thirteen; so that by the time early adolescence is reached, the black children are making along with the bodily changes common to all, an easy transition to adult forms of address, beginning to call their old playmates missus and baasie little master.” (pg 44 Clugston) What It’s Like to Be a Black Girl by Patricia Smith also speaks of the differences of being a person of color and wanting to be more like a Caucasian person, “like there’s something, everything, wrong, it’s dropping food coloring in your eyes to make them blue and suffering their burn in silence. It’s popping a bleached white mophead over the kinks of your hair” (pg 267 Clugston). The feeling of not belonging, the feeling of being different, and unique is best stated by Patricia Smith What It’s Like to Be a Black Girl, “first of all, it’s being 9 years old and feeling like you’re not finished, like your edges are wild, like there’s something, everything, wrong” (pg 267 Clugston).

When comparing and contrasting the poem Patricia Smith What It’s Like to Be a Black Girl to the short story Country Lovers by Nadine Gordimer you see that the these two young black women want to be accepted in the world around them. The girl in the poem is trying to change her image by once again quoting “like there’s something, everything, wrong, it’s dropping food coloring in your eyes to make them blue and suffering their burn in silence. It’s popping a bleached white mophead over the kinks of your hair” (pg 267 Clugston). Where as the short story states that nobelprize.org states that Nadine Gordimer “Born in Springs, South Africa, 20/11/1923. Daughter of Isidore and Nan Gordimer. Has lived all her life, and continues to live, in South Africa. Principal works: 10 novels, including A Guest of Honour, The Conservationist, Burger’s Daughter, July’s People, A Sport of Nature, My Son’s Story and her most recent, None to Accompany Me. 10 short story collections, the most recent Jump, published 1991, and Why Haven’t You Written: Selected Stories 1950-1972, published 1992.

Honorary Member American Academy of Arts & Sciences, Honorary Member, American Academy and Institute of Arts and Letters, Fellow of the Royal Society of Literature, Goodwill Ambassador UNDP. Order of The Southers Cross, South Africa, Order of Friendship, Republic of Cuba, Presidential Medal of Honour of the Republic of Chile.”poets.org states that, “Patricia Smith, a poet, teacher, performance artist and author, was born in 1955. She is the author of four books of poetry: Teahouse of the Almighty, (Coffee House Press, 2006), a 2005 National Poetry Series selection; Close to Death (1993); Big Towns, Big Talk (1992), which won the Carl Sandburg Literary Award; and Life According to Motown (1991).

Her poems have been published in many anthologies, including American Voices (2005), The Spoken Word Revolution (2003), and Bum Rush the Page (2003.) She is also the author of a history book, Africans in America (1998), along with a children’s book, Janna and the Kings (2003). She is currently working on Fixed on a Furious Star, a biography of Harriet Tubman. A four-time individual champion on the National Poetry Slam, Smith has also been a featured poet on HBO’s Def Poetry Jam and has performed her work around the world.

She has written and performed two one-woman plays, one of which was produced by Derek Walcott’s Trinidad Theater Workshop. She is a Cave Canem faculty member and has served as the Bruce McEver Chair in Writing at Georgia Tech University.” Both are amazing authors with many writing techniques and styles. The short story and the poem are closely related due to the fact that two young black women trying to survive in a predominantly white world dealing with race and trying to fit in a world that is not where they are comfortable with their own livelihoods.

What It’s Like to Be a Black Girl by Patricia Smith?. (2016, Oct 19). Retrieved from https://studymoose.com/what-its-like-to-be-a-black-girl-by-patricia-smith-essay 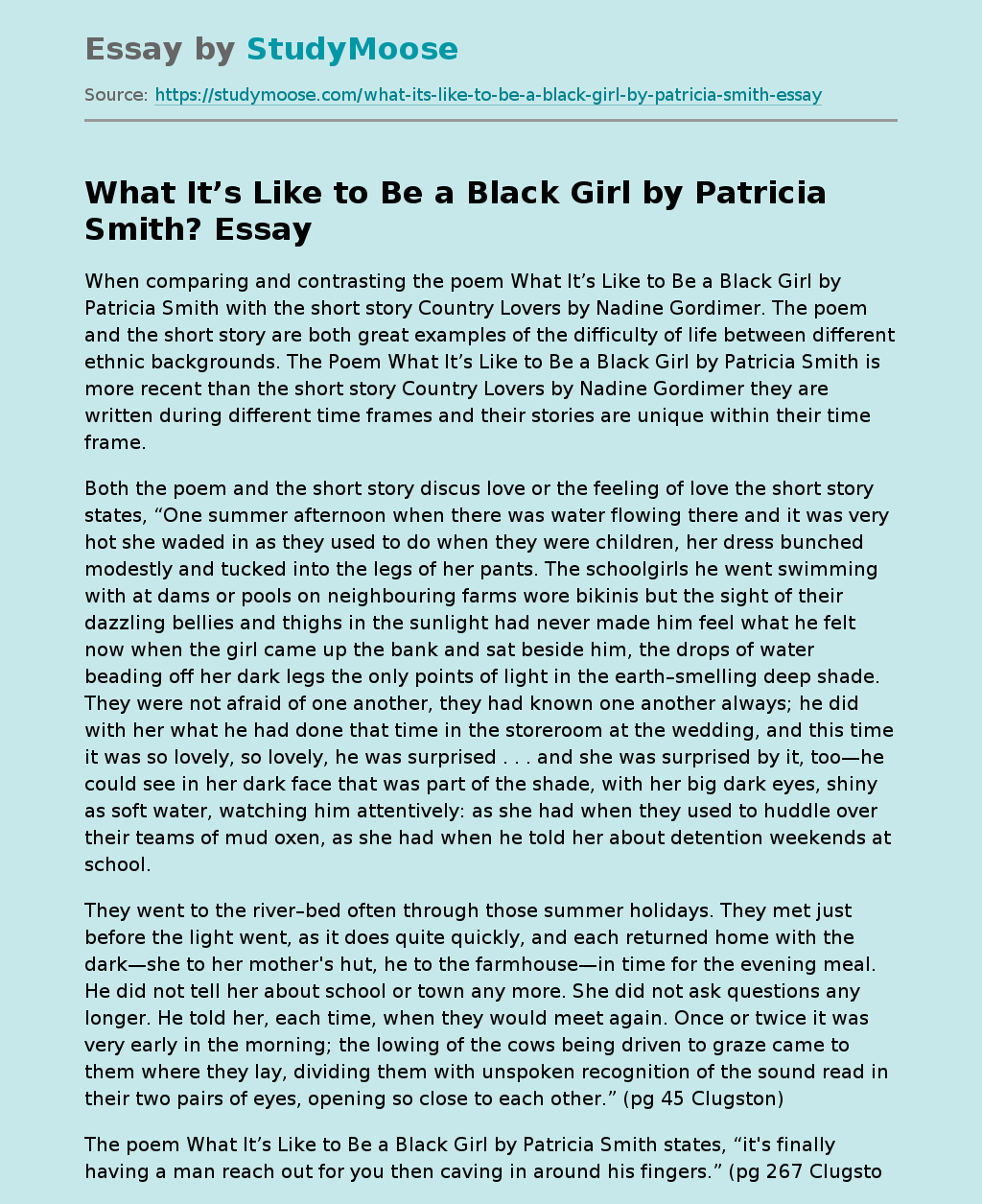