“Of Plymouth Plantation” is a manuscript of Bradford’s history starting in 1620. The first book was copied into the church records and preserved, but unfortunately the second part was presumably lost. The manuscripts were found in the residence of the Bishop of London and were published together for the first time in 1856. There seems to be immeasurable history in these books.

William Bradford, the author of “Of Plymouth Plantation” gives a narrative of the voyage to Cape Cod. In the beginning of chapter 9, Bradford starts with a story of a young sailor whom had cursed and slighted the pilgrims for their weakness and constant sickness.

Turn in your highest-quality paper
Get a qualified writer to help you with
“ Of Plymouth Plantation ”
Get high-quality paper
NEW! AI matching with writer

However, that same sailor died from an unstated disease, giving the pilgrims peace as they no longer had persecution from any sailor. Bradford also mentions that young John Howland had fallen into the sea. Howland was under the water for a long time and as he held on to a topsail halyard, a rope that hangs overboard, he was pulled down to a deep level while the ship moved at a steady pace.

After he was rescued Howland was sick for a long time, but survived in spite of his experience.

As the Pilgrims finally reach Cape Code, Bradford explains the problems of the voyage which were part of the reason they had not made it all the way to Jamestown. The Pilgrims were elated to see land however they were also troubled because they had arrived during winter. Not only were land conditions poor for farming at this time, but the ground was also hard.

The few provisions they brought had been mostly for the journey, and not necessarily for the winter. Yet, due to the condition of the ship, the general consensus was to stay at Cape Cod.

The Pilgrims arrived at Cape Cod aboard the Mayflower on November 11th, 1620. When they arrived, sixteen men, lead by Miles Standish, went on an exploration hoping to find a nearby river. In the process, they stumbled upon a small group of natives. However, the natives ran away when they caught sight of the Pilgrims. The Pilgrims followed the natives and consequently came across a former village where they took some of the provisions that were left there. They also came upon two more dwellings where they found some seeds, which they were thankful for.

At day break, the Pilgrims found themselves under attack by the natives, which caused them to retreat from the area. However, the winter weather had gotten bad, and they had to spend some time on an island before heading back to the ship. On Monday, they were able to return to the ship. The party subsequently anchored in Plymouth where they began to build the colony’s first house.

When reading these two chapters of Bradford’s manuscript, one would begin to appreciate the value of history. America’s possession of the first accounts, from Bradford’s perspective, of the Mayflower’s voyage to Plymouth is invaluable.

In _American Historical Review_ David Read said, “William Bradford’s Of Plymouth Plantation could easily be categorized as yet another largely unread, dry-as-toast document from the days before things got really interesting in this country (p512).” Any reader would realize the piece of history which makes this logic absurd, nevertheless understanding that it is dry and very difficult to read. Bradford seems to ramble on about significant details; however this is a manuscript and not a professionally written book.

One of the best-known sections of Bradford’s manuscript is chapter nine, which details the arrival to Cape Cod. The Pilgrims are struck by what they perceive as a desolate wilderness, utterly hostile and without comforts. Bradford emphasizes the tribulation they endured in sailing to this new land, and in his writings, Bradford wants the reader to understand that things did not get any better. Continuing in chapter ten, readers can see Indians being more problematic and viewed as a hostile force of nature to be reckoned with, ready to destroy the Pilgrims.

In conclusion, the point of these chapters in “Of Plymouth Plantation” is to emphasize the struggles, hardships, and privations suffered by the Pilgrims in an attempt to show that they had been chosen for success by divine Providence. As David Partenheimer said in _Explicator_, “In any case, it is a remarkable moment in American literature when the New World is typologically conceptualized as the Promised Land for a chosen people despite a landscape of hell (p121).” 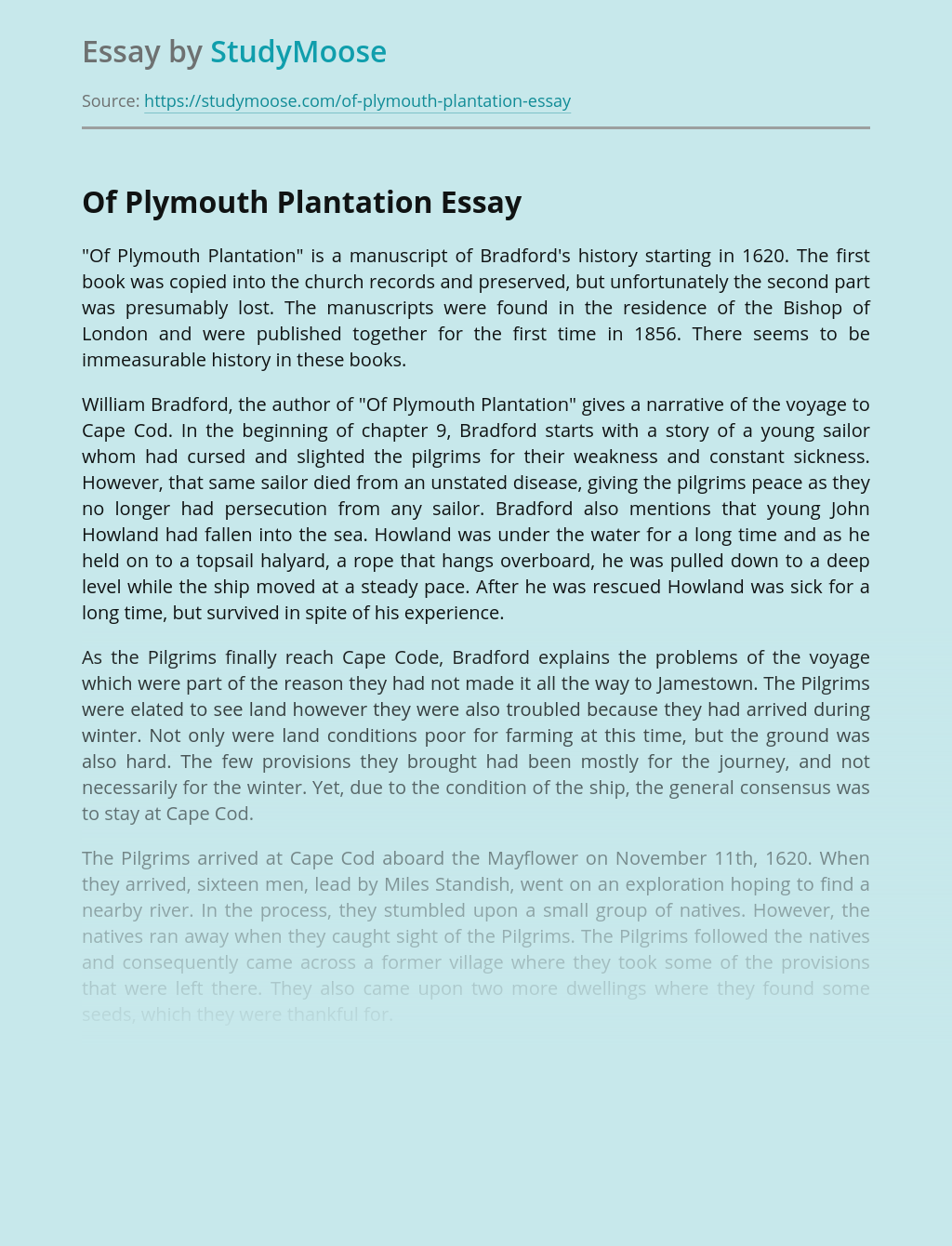 Turn in your highest-quality paper
Get a qualified writer to help you with
“ Of Plymouth Plantation ”
Get high-quality paper
Helping students since 2015
Stay Safe, Stay Original