The World War I Battle of Verdun (Feb. 21-Nov. 26, 1916), an unsuccessful German effort to take the offensive in the west, was one of the longest and bloodiest encounters of the war. Total casualties have been estimated at about 542,000 French and about 434,000 Germans.

At the background, on June 28, 1914, Franz Ferdinand, Archduke of Austria and heir to the Austro-Hungarian throne, was assassinated in Sarajevo by Gavrilo Princip, a Bosnian Serb nationalist. The assassination soon triggered World War One. As soon as the war began, Germans began to implement their war plan, the Schlieffen Plan .

Don't use plagiarized sources.
Get Your Custom Essay on Battle of Verdun Analysis Just from $13,9/Page

However, due to the inflexibility of the plan as well as the incompetence of the German commander von Moltke, the Central Powers failed to capture Paris and knock France out of the war.

As a result of the failure of the Schlieffen Plan, the rapid war of movement expected by the great powers before 1914 soon bogged down into a stalemate in the Western front. Trench warfare was developed and neither sides could achieve a breakthrough.

Following the failure of the Schlieffen Plan, both sides attempted to break the trench lines and ended in vain. In September 1914, Falkenhayn succeeded Moltke as Chief of Staff after the Battle of the Marne. Falkenhayn intended to impose a ruinous battle of attrition on the French armies in Verdun as the city held great strategic and symbolic importance to the French.

The BattleThe battle of Verdun was the longest battle of war and cost both sides many thousands of casualties. It was fought between the Germans and French from 21 February to 19 December 1916. The German assault, directed by Gen. Erich von Falkenhayn, began with a furious bombardment followed by an attack on the region surrounding Verdun, which lay in the middle of an Allied salient jutting into the German zone in northeastern France. Initially successful, the Germans captured Fort Douamont (February 25).

Gen. Joseph Joffre, the French commander in chief, was determined to halt further retreat for reasons of morale as well as strategy. On February 25 he assigned Gen. Henri Philippe Petain to head the Verdun defense. Petain, fighting under the famous motto Ils ne passeront pas! (“They shall not pass!”), reorganized his command and brought up reinforcements while the weary German troops paused.

On March 6 the Germans attacked the western face of the salient; they were halted after initial advances, but the loss of life on both sides was enormous. A third offensive, from both east and west, began on April 9, but again the Germans were stopped. German assaults continued into early July, and Petain, who had been promoted and replaced as local commander by Gen. Robert Nivelle, recommended withdrawal. During the summer, however, the Anglo-French Somme offensive and the Russian Brusilov offensive drew off German manpower, and in the late summer the Germans adopted a defensive posture on the western front.

The French soon took the offensive. Under Gen. Charles Mangin they recaptured Fort Douamont (October 24) and Fort Vaux (November 2). By the time the fighting at Verdun had ended in mid-December, the French had advanced almost to their February lines.

The obvious successes of the fixed fortification system (with the exception of Fort Douaumont) led to the adoption of the Maginot Line as the preferred method of defense along the Franco-German border during the inter-war years. France’s army was subsequently plagued not with desertions, but rather with a general refusal to march face-first into the teeth of Germany’s impregnable positions. France’s troops remained in their trenches, willing to fight only in a defensive capacity.

At the significance of the Battle of Verdun became a symbol of French determination, inspired by Petain’s declaration “they shall not pass”. The Germans achieved their initial aim, to inflict heavy losses on the French, but their own casualties were comparable. 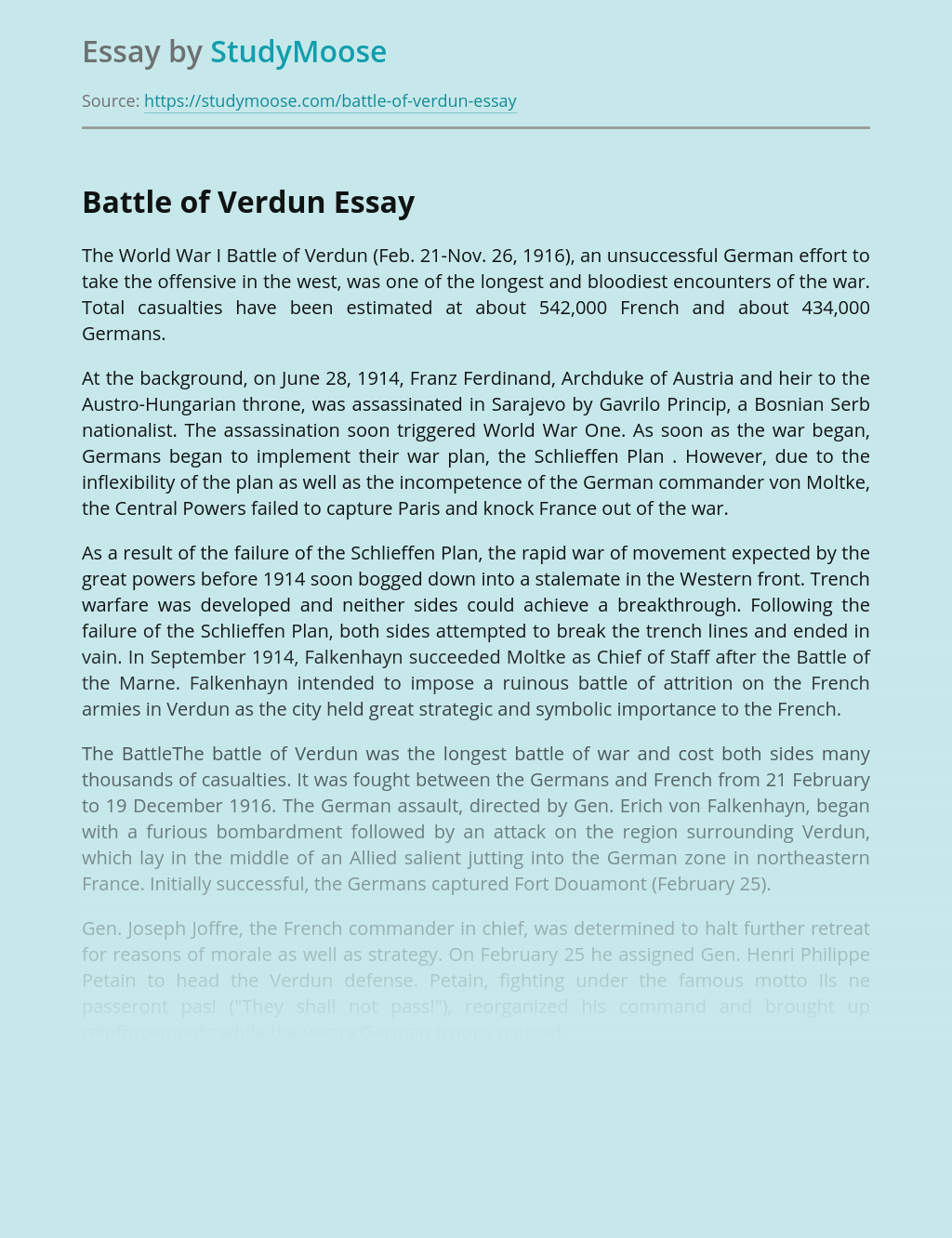 Introduction Though popular consensus is that management and leadership are interchangeable terms with the same purpose and meaning nothing could be further from the truth. Management can be defined as influencing one or more person’s actions and activities through planning, organizing, leading, controlling and guiding toward accomplishing set goals or objectives. Leadership can be defined...

Army A Way Of Life I Choose

Leadership Growing up from a military background (dad, brother, aunt, and uncle), my parents taught me the importance of being a responsible person since I was a child. They instilled guidance, responsibilities, keeping commitment, and being a leader not a follower at an early age. With these values it carried me through elementary school, middle...

Military metaphors are commonly used in everyday conversation. During these uncertain times, politicians exploit this at the drop of a dime. Strategy, tactics, ammunition and arsenal, words with pure military meaning, are used frequently in the current political atmosphere. Some other examples of military metaphors that come to my mind are: Spearheading the discussion, Getting...

Army Worths Essay Honor, stability, selfness-service, responsibility, regard, personal nerve, and loyalty, these are the 7 army values in which each and every member need to stay real to. My definition of honor may be skewed from the publics view of honor. In my eyes, when you are appreciative that you are provided the opportunity...

United States Army guidon the practice of carrying colours, requirements or Guidons, to act As described in Army Guideline 840-10, Chapter 6, US Army guidons are swallow-tailed marker flags in branch-of-service colors, measuring 20 in. at the hoist by 27 in. at the fly, with the swallow-tail end forked 10 in. Formerly guidons were made...