"Landscape with the Fall of Icarus" by William Carlos Williams

The poem “Landscape with the Fall of Icarus”, by William Carlos Williams, portrays in writing the painting by Brueghel. The piece depicts the Greek myth of the tragedy of Icarus, a boy who flew too close to the sun with wax wings and fell into the sea to his death. The poem has no set rhyme scheme or meter, an example of one of Williams’ many free verse poems. After reading the poem many times, I started sensing a feeling of insignificance; that the tragic event of Icarus’ death was “quite unnoticed”.

Don't use plagiarized sources. Get your custom essay on
“ “Landscape with the Fall of Icarus” by William Carlos Williams ”
Get custom paper
NEW! smart matching with writer

One factor contributing to this feeling was the stanza organization. Each stanza was very short, usually containing a sentence or less, and included many enjambments, “a farmer was ploughing/ his field/ the whole pageantry”, “of the year was/ awake tingling/ near”. The considerably short length of each stanza creates a feeling of unimportance; with no attempt at describing the scene in-depth, Williams just gives the reader a superficial view of the scene.

There are also some stanzas that explicitly state the insignificance of Icarus’ fall, “the edge of the sea/ concerned/ with itself” and “insignificantly/ off the coast/ there was/ a splash quite unnoticed/ this was/ Icarus drowning”.

Williams accentuates this unimportance by writing, “insignificantly/ off the coast/ there was/ a splash quite unnoticed/ this was/ Icarus drowning”. When viewing the painting, Williams must have sensed the slightness of the accident and correctly portrays this in a variety of short and simple stanzas.

While I was reading the poem for a third time I looked at the title and noticed the word “Fall”. After that I looked down at the poem itself and noticed that the stanzas were written in a short simple way to be narrow enough so that the reader can kind of sense the feeling of falling. After noticing that I also observed that the word “Icarus” appeared both at the top and bottom of the poem, and tying that with the sense of falling, I found a connection to Icarus’ accident. The first stanza contains the words “Icarus fell” symbolizing Icarus being up high in the sky and having his wings melted off. As the poem continues down it symbolizes Icarus falling down to the ocean until finally the poem reaches the end with “Icarus drowning”, which is the end of both the poem and Icarus.

"Landscape with the Fall of Icarus" by William Carlos Williams. (2016, Jul 11). Retrieved from https://studymoose.com/landscape-with-the-fall-of-icarus-by-william-carlos-williams-essay 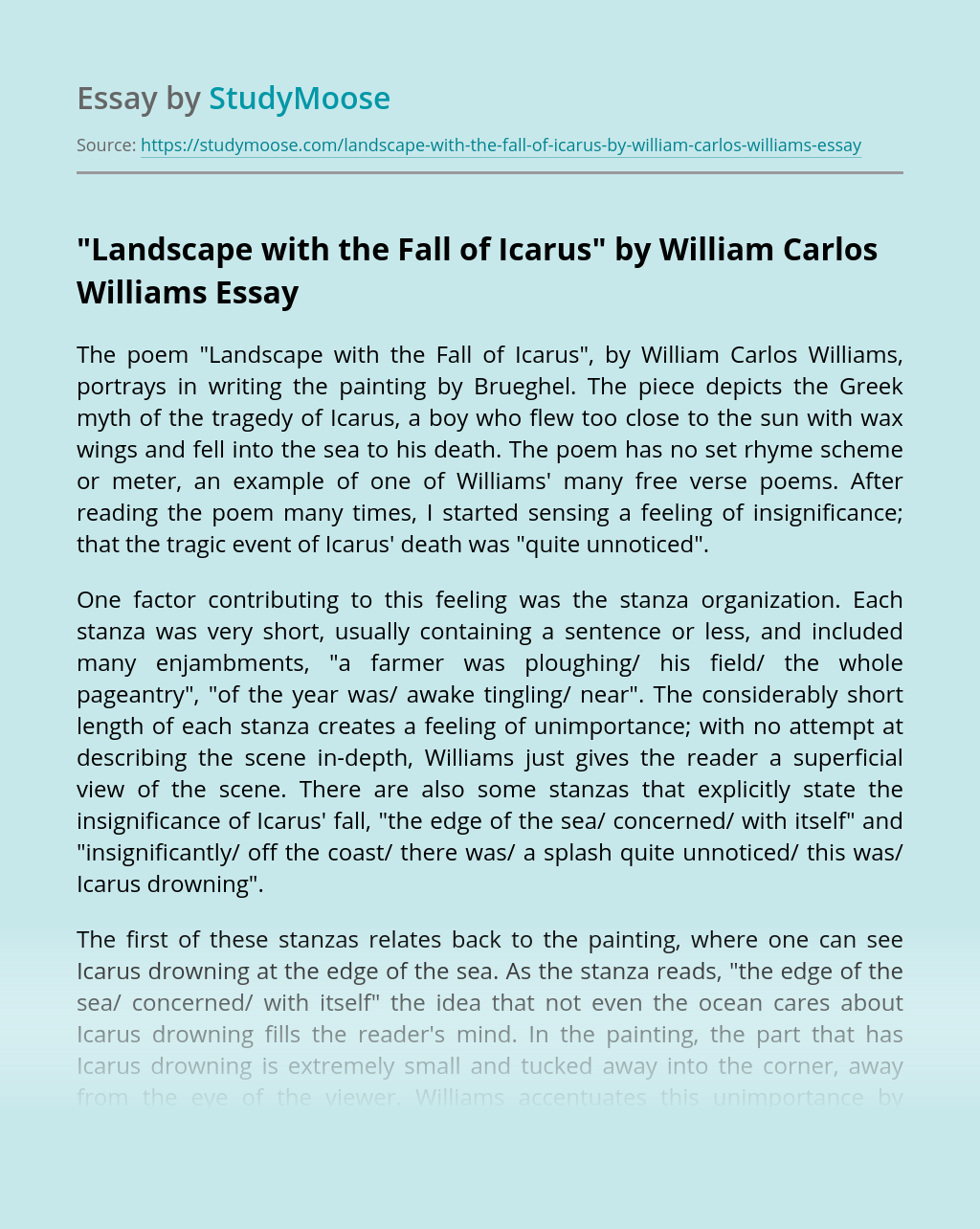