Robbie Jones
Ms. Cheney
English 1 Honors Period 1
22 May 2012
Tragic Character and Plot in Things Fall Apart
Despite being written in 1959 and set in Nigeria, Things Fall Apart by Chinua Achebe reads much like a Greek tragedy. AmidstPrinciples from Aristotle’s theory of tragedy in the Poetics are evident throughout the novel, and contribute to the development of the protagonist and the incidents of the plot. Amid the images of slaves, missionaries, and western colonialism, Achebe uses these principles to create a tragic character and plot that carrypropel his story.

Don't use plagiarized sources. Get your custom essay on
“ Tragic Character and Plot in Things Fall Apart ”
Get custom paper
NEW! smart matching with writer

Components of a the tragic character incorporated into the novel are present in the protagonist, Okonkwo. FirstIn him, the concept of hamartia, a tragic flaw in the protagonist, is evident in Okonkwo. His life is driven by ahis overpowering fear of failure. It is this fear that restrictsprevents him from showing sensitivity or any other sign of weakness when interacting with other charactershis family or friends:

Okonkwo ruled his household with a heavy hand.

His wives, especially the youngest, lived in perpetual fear of his fiery temper, and so did his little children […]. […] his whole life was dominated by fear, the fear of failure and of weakness. (13) Time and time again, Okonkwo’s tragic flaw influences his actions in a negative way. Second, Okonkwo displays consistency in his personality, even to the point of obduracy. Although there are many opportunities for him to change his habits, he cannot rid himself of the fear of turning out like his father. When Okonkwo and his family are exiled to his motherland for seven years, Okonkwo’s uncle, Uchendu, observes the manner in which Okonkwo treats his family.

However, Okonkwo is still bound by thoughts of his father’s failures, and he continues to stay emotionally detached from his family. Third, Okonkwo exhibits a strong moral purpose and quality., or in Aristotle’s words, “good or fine.” While his vices sometimes overshadow his virtues, and though his attitudes often skew his perception of life, ultimately Okonkwo simply wants what is best for his family and village. For example, Okonkwo attempts to inspire his son Nwoye with masculine tales of war and bloodshed. He desires for his son to grow into a man that is commanding and prosperous. The qualities of a tragic character displayed in the novel color Okonkwo in all that he does.

In addition to the tragic elements of character, components of the concept of plot are also used in the novel. To begin, anagnorisis, a change from ignorance to knowledge, occurs as Okonkwo realizes his clan will not fight as he desires. ThisHis realization occurstakes place near the end of the novel:

Okonkwo stood looking at the dead man. He knew that Umuofia would not go to war. He knew because they had let the other messengers escape. They had broken into tumult instead of action. He discerned fright in that tumult. He heard voices asking: “Why did he do it?” He wiped his machete on the sand and went away. (205) Okonkwo had persistently tried to encourage his clansmen to go to war and drive the white men out by force, but he finally comes to the conclusion that they will not listen. Next, peripeteia, an effect opposite to that which a character intended to produce, is also displayed when Okonkwo murders the messenger. He had desired to invoke within his people courage and inspiration to revolt against the white man, but he instead brought about fear and questioning among the clansmen. Finally, the anagnorisis and peripeteia complement one another in such a way to create the catastrophe, or change of fortune. This is seen when Okonkwo, who had been a venerated man with a strong purpose in life, takes his own life as he feels there is no longer any reason to continue living. Traits of a tragic plot drive the novel as they create sudden changes in the action, giving flavor to the story.

Things Fall Apart is surprisingly Greek as it includes features of a tragic character and a tragic plot. The tragic flaws in Okonkwo often control his life while they lead to his catastrophic death. Numerous character qualities from Aristotle’s Poetics are within Okonkwo, influencing his attitude and relationship with others. Meanwhile, components of tragic plot are at work, generating surprise and revelation, especially near the story’s end. These components discussed by Aristotle intertwine to form Achebe’s intricate novel Things Fall Apart, which has a well-established protagonist and a compelling plot. 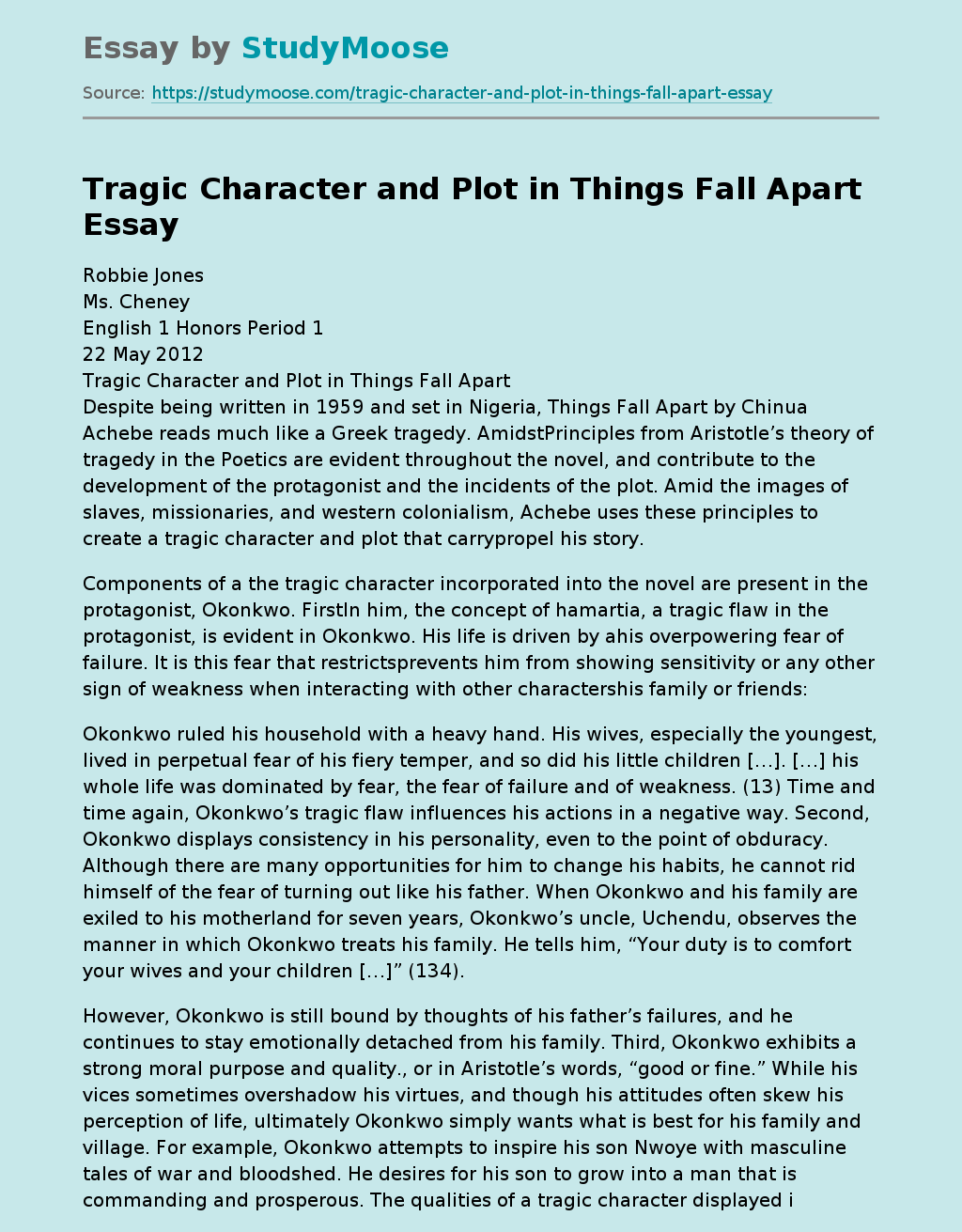