Contrasting "Conflict in Things Fall Apart" and "Heart of Darkness"

Heart of Darkness by Josef Conrad and Things Fall Apart by Chinua Achebe are two novels that are written to make a statement. Both are meant to stir the emotions of the reader, whether those emotions be anger, hope, frustration, joy, despair, or enlightenment. Both novels take place in the same location and same time period and involve the same groups of people. Both novels depict European imperialism in the African Congo in the 1800s. The obvious distinction between the two is that Heart of Darkness tells a tale from the European point of view while Things Fall Apart tells one from the Native African Tribe point of view.

Don't use plagiarized sources. Get your custom essay on
“ Contrasting “Conflict in Things Fall Apart” and “Heart of Darkness” ”
Get custom paper
NEW! smart matching with writer

Both authors use extremely well developed characters to manifest and exhibit controversies and bring to light critical aspects of human nature and propensity. Both authors use conflict of various types to ascertain an overall theme. Although the novels use similar settings in the expression of their ideas, the underlying themes Conrad and Achebe choose to focus on are very different.

To begin, both Conrad and Achebe wish to make statements on the negative consequences of Imperialism with their novels, but choose to emphasize completely unrelated and extremely different issues. In Heart of Darkness, the conflict has to do with the destructive consequences of the self-discovery and internal turmoil that goes with segregation from society in an untamed, ruthless, savage place such as the African Congo.

Years of life in the jungle drove the brilliant Kurtz to near insanity:

“the wilderness had found him out early, and had taken on him a terrible vengeance for the fantastic invasion. I think it had whispered things to him about himself which he did not know, things of which he had no conception till he took council with this great solitude” (98). For Marlow, the dark and hollow core inside himself and all mankind is also exposed during his conquest into the unfamiliar land, and he too comes very close to being pushed into insanity by his realizations: “The most you can hope from it is some knowledge of yourself — that comes too late — a crop of inextinguishable regrets… Since I had peeped over the edge myself, I understand better the meaning of his stare… he had made that last stride, he had stepped over the edge, while I had been permitted to draw back my hesitating foot” (119).

Obviously, Conrad chose to focus his novel not on the conflicts that arise between people in societies that try to impose on each other, but rather how a new environment and point of view can lead to self-discovery and internal conflict within oneself. On the other hand, Achebe’s obvious focus was on the falling apart of a culture that can occur with a more powerful culture’s abrupt influence. He emphisizes throughout his novel many directly contrasting aspects of European society and the Ibo people, and the conflict this causes both between the two group and among the Ibo people themselves. As the wise Obierka observes, “he [the white man] has put a knife on the things that hold us [the Ibo people] together and we have fallen apart”. The use of the words he and we implies that the conflict exists between individuals; between whites and blacks, Europeans and natives, believers and non-believers, loyalists and traitors.

More specifically, one can observe the trials of the two novels’ main characters. Both main characters are tragic heroes and develop such dreadful internal conflict that in the end both are led to destruction, this conflict is rooted very differently for each of them. In Heart of Darkness, inner station manager Kurtz is found by Marlow in a state of essential insanity; an intellectual and economic genius turned delusional, raving, fanatical, and savage. As Marlow explains, Kurtz’s “intelligence was perfectly clear and concentrated, it is true, upon himself with horrible intensity, yet clear; … his soul was mad. Being alone in the wilderness, it had looked within itself, and, by heavens! I tell you, it had gone mad” (113). Kurtz’s downfall was one that had developed from within himself. In Things Fall Apart, former tribal leader and respected warrior Okonkwo ends up losing the admiration of his people and eventually hanging himself. The self-loathing hopelessness that led to his suicide came primarily from the discord that had developed between himself and the people of his tribe and the hostility of the whites. 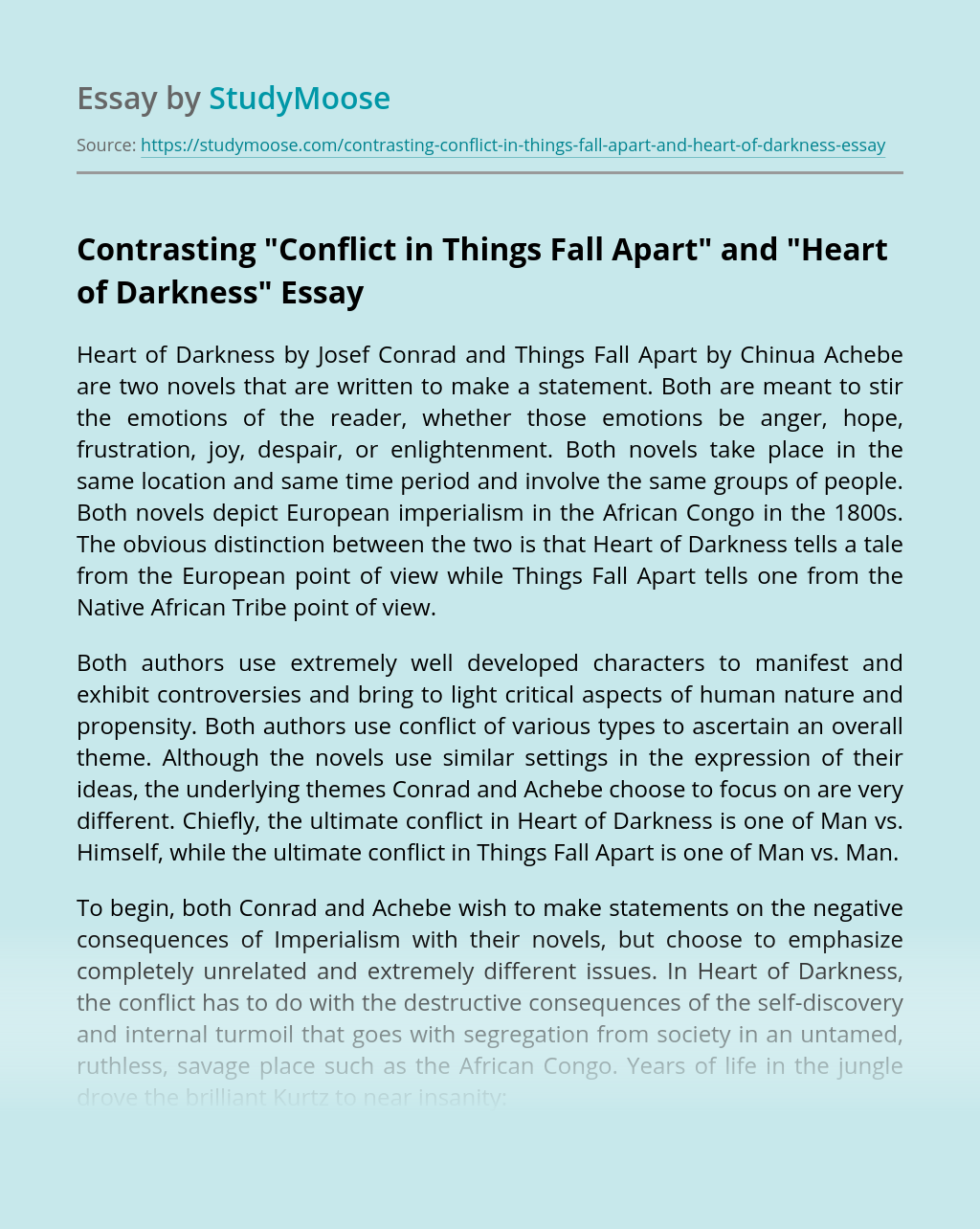