Darkness in Heart of Darkness

Every man and woman has a dark side to them. The characters in Joseph Conrad’s Heart of Darkness are no different. In this novella, a man named Marlow travels into Africa because he wants to fill the “blank spaces’” on the map, but what he encounters there is not at all what he expected or hoped for (Conrad 373). He finds that the colonists who came before him have turned into violent and covetous people. They have lost sight of who they really are and have forgotten the reason they went to Africa in the first place, to build a civilization.

Don't use plagiarized sources. Get your custom essay on
“ Darkness in Heart of Darkness ”
Get custom paper
NEW! smart matching with writer

A certain darkness in the jungle has overtaken them, and they are overwhelmed and unable to realize it. In Heart of Darkness, Joseph Conrad uses imagery and setting to display the effects of the darkness within the jungle and within imperialism, while in “When I Consider How My Light Is Spent,” John Milton provides a more literal way that darkness can consume a human’s life.

The title represents the spiritual and unexplored darkness within the characters. In the novella, the jungle brings out the greedy and selfish side of men, their own heart of darkness. It is a “night journey into the unconscious” when men go to Africa (Meisel 21).

Even the doctor that Marlow meets warns him that when men go to Africa, they change, and “the changes take place inside” (Conrad 376). Kurtz goes to Africa as what society sees as a leader and a good man. He has ambition and the potential to be great.

His intended, not knowing what Kurtz has become in Africa, says that there is “’goodness shone in every act’” that he does (Conrad 428). Kurtz is a man that, with good intentions, wants to bring civilization to Africa. “Kurtz came to Africa seeking adventure and advancement,” however once he is there, something dark takes over him, and he is consumed by greed and power (Meir-Katkin 588).

He finds out that in this new place, he can control others and become rich through ivory. The good-natured Kurtz who wanted to be a hero for others is now only concerned with himself and what is good for him. He no longer carries with him anything that he did before. Kurtz has turned to the dark side, and he never comes back. He turns into a monster and can no longer control himself. Even when he has a chance to at least attempt to go back to whom he once was, he desperately tries to crawl away from it. The darkness inside him has taken over.

The jungle is what kills Kurtz, and only when he is taken away by Marlow does he realize who he has become and everything he has done. All he can do is shout “’The horror! The horror! ’” (Conrad 423). Conrad uses Kurtz to illustrate what a place without the light of civilization or rules does to a man. Like Kurtz, but in a literal fashion, the narrator in “When I Consider How My Light Was Spent” has high hopes for his life. He believes that he could have been a great servant of God, but he goes blind, and darkness takes over his life. It bars him from doing what he dreams of, as Kurtz is barred from living the altruistic life had planned.

Both men’s lives take a complete turn in direction when darkness takes over. No longer can they strive for their goals of greatness that they once held for themselves. Similar transformations occur in characters that have also been in the jungle as long as Kurtz has. The manager is also taken over by greed. He wants ivory and the wealth it brings just as much as Kurtz does, and he is envious of his success. He, too, turns into a shell of his former self, as Marlow describes that “there was nothing within him” (Conrad 384). Conrad uses this man to show that what happened to Kurtz is not a unique occurrence.

Darkness “is a manifestation of evil,” and this evil is present in the jungle, and takes new residence in the form of characters like Kurtz and the pilgrims (Meir-Katkin 589). Darkness also represents the colonists’ blindness to their mistreatment of the natives. Aside from being a psychological issue, the darkness inside these men leads them to be extremely violent. The colonists use brute force and violence to assert their dominance over the natives. Kurtz displays this aggression by proudly displaying the heads of the men he has killed on sticks.

This is the symbol that makes it clear that Kurtz has gone mad. Only a man completely consumed by power would do something like this. It shows that not only does he use violence, he is proud of it. He wants everyone to see that he is in control and that their fate will be the same if they cross him. Kurtz even organizes an attack on Marlow and his crew because he is so consumed by the darkness that eats away at him in the jungle.

He doesn’t want to leave now that he has power and wealth, even though it has transformed him into the type of savage that he went to Africa to help change in the first place. It is clear that he has turned especially toward violence when it is shown in his note that he wrote “Exterminate all the brutes! ” (Conrad 407). He wants to be the king of the jungle, and have superiority over everyone and everything, no matter how many human beings, or in his mind, brutes, he has to kill to get there. It is not just Kurtz that has turned to brutality, though. It is all of the colonists. They have all the healthy black men chained up, and the others are sick and dying. Marlow tries to give one of them a snack, but he dies right there on the spot.

The colonists are forcing terrible conditions onto the natives, using them as slaves, all while using the excuse that they are forming civilization. They may have gone to Africa with good intentions, but the jungle turns them into violent beings with no real concern for helping the natives. Darkness also casts a shroud of ambiguity throughout the novella. Marlow is constantly searching for answers, but can seldom find any. When he arrives in Africa, Marlow discovers that the steamboat he is supposed to sail up the river is damaged.

This confuses Marlow, and he can’t see why or how this occurred, although he believes that it was done on purpose. He is also not sure what to think of Kurtz. He has no idea who this man is or what happened to him, but everyone seems to be talking about him. Marlow has only heard of Kurtz, “Yet somehow it didn’t bring any image with it [his face]” (Conrad 388). Kurtz is nothing but a mystery to Marlow. Then later, when Marlow’s ship is sailing down the river, it goes through a patch of dark, dense fog, when he and his crew are attacked by a group of savages, and they have no idea why.

Both the fog and the attack add to the idea that darkness is a symbol for the unknown. The fog adds to the darkness and blinds Marlow and his crew, literally and symbolically. Literally, it blinds them from the attack and what was ahead. Symbolically, it was yet another indicator that Marlow doesn’t quite understand what is happening around him. Similarly, in “When I Consider How My Light Is Spent,” the narrator, after going blind, is left to navigate “this dark world and wide” without light and without, he feels, God (Milton 496).

In the same way, Marlow is left to navigate the river in darkness without sight, not knowing what will happen to him and his crew along the way. With darkness, “Marlow loses the ambition and promise” that he brings with him to Africa because the lack of light depletes his intellect and ability to see clearly (Meisel 25). Conrad uses darkness to describe how Africa can change a man, and also uses it as a symbol to show how it can be a source of confusion and frustration. What is unclear is how it changes men and why. For John Milton, his darkness is real and it restricts him from seeing things literally.

For Kurtz and Marlow, darkness limits both their ability to see what is real, and their ability to become the men they are supposed to be. Regardless of what it is, there is a heart of darkness in everyone and everything. Nobody is free from the shackles of darkness and what it can do to a person, which is what Conrad describes in Heart of Darkness. Everyone gets a glimpse of this sometimes in their lives when they start to get overwhelmed with greed, envy, or any of the sins; however it is vital not to get taken over by it, or the confusion that comes with it.

Darkness in Heart of Darkness. (2018, Sep 28). Retrieved from https://studymoose.com/darkness-in-heart-of-darkness-essay 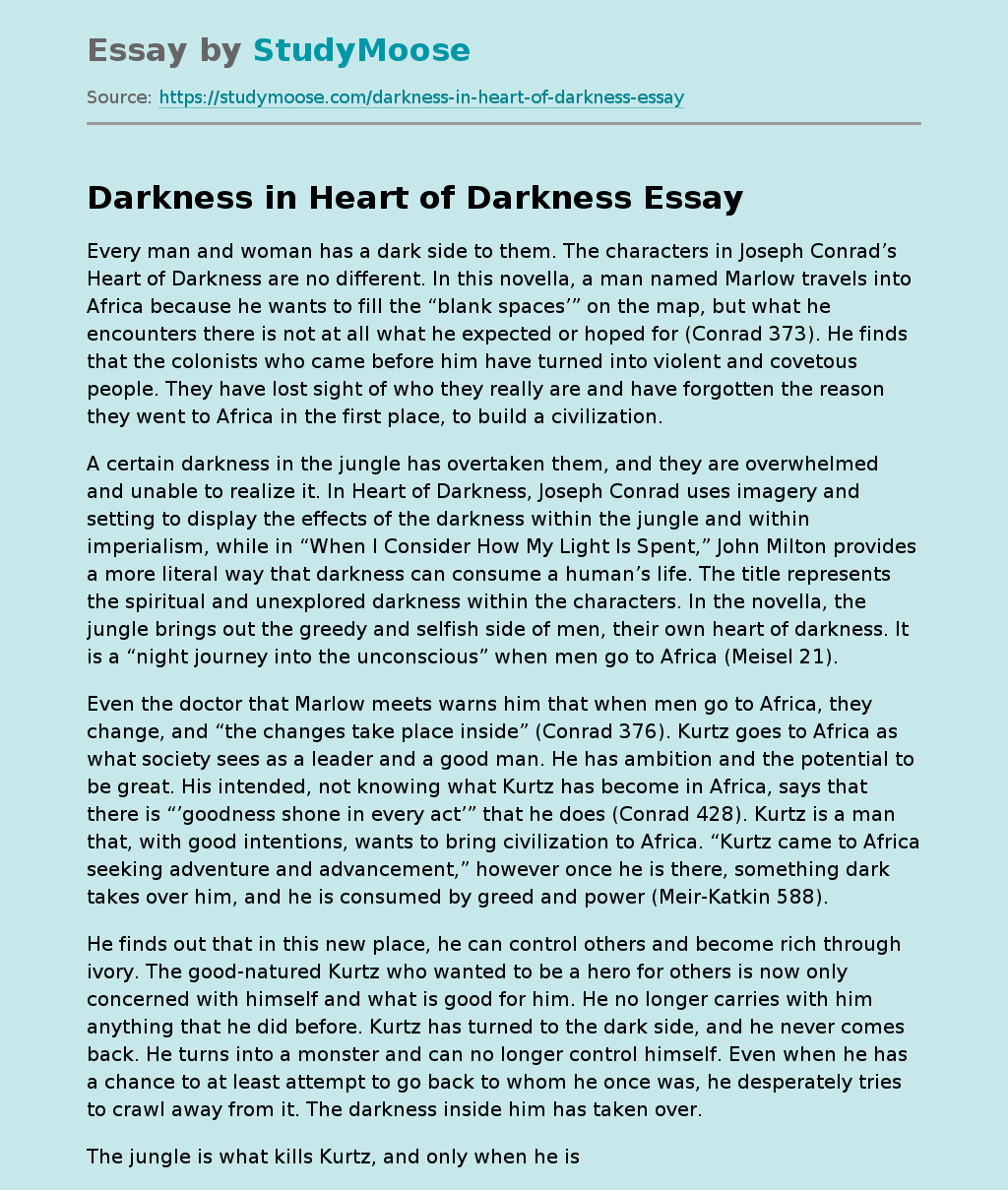