It is common to divide the world in the West and the East. This division has been used to differentiate two parts of the world that are inherently not alike either in cultural, social, political or economical aspects. However, historically, both regions of the world have been tied in one way or the other. Even though technically speaking Africa is not west of Europe, during the 19th century, African colonies were highly appreciated for their wealth and for slave trade by the European powers, a relation similar to that of the Asian colonies had with Europe, and so in that perspective we can say Africa is part of the Orient.

Don't use plagiarized sources. Get your custom essay on
“ Orientalism in Heart Of darkness ”
Get custom paper
NEW! smart matching with writer

The clash between the imperial powers and Africa eventually led to the submission of the latter and therefore created a particular point of view from where Europeans understood Africa and the relation they had with it. This mode of relating to their colonies and the cultural depictions made by Europeans were later given the term Orientalism by Edward Said.

This clash of civilizations and the interplay between colonialist and natives from the colonial viewpoint, or in other words, their Orientalist prism, is one of the themes that Joseph Conrad’s The Heart of Darkness develops. Conrad displays the consequences of a society attempting to impose itself on another, illustrating the personal tragedy of an individual who lives through this clash.

Orientalism is based on the attempt to incorporate the Orient as a new resource, either cultural or economical, being something different and exotic to the Western standards.

Historically, the western men have been determined by their desire to embark on voyages to new worlds; worlds that are to bring prosperity to the society these men belong to so that society can progress and grow. That is how often times, when western men do this; the potential consequences of carrying these enterprises are not questioned.

These consequences are far-reaching and inescapable too all fields of knowledge, both practical and theoretical, not because they are born from great colonizing projects, but because the imperialist adopts the same mindset to manage the colonies and to know about the colonies. In Said’s words: “…For Orientalism brings one up directly against that question—that is, to realizing that political imperialism governs an entire field of study, imagination, and scholarly institutions—in such a way as to make its avoidance an intellectual and historical impossibility” (Said, 1977)

The western man accepts the influence of this relation when he relates to the orient in this imperialist manner, considering that even though the 19th century colonies were established for economic and trading purposes, such as the ivory trade, the relation extensively transcends the economical. By such relation, new doors are opened in many aspects, since a clash cultures that are completely different leaves both parties at odds and in a position where neither one knows exactly how to act. Said studies “… Orientalism as a dynamic exchange between individual authors and the large political concerns shaped by the three great empires—British, French, American—in whose intellectual and imaginative territory the writing was produced.” (1977).

Clearly, Said intends to focus his study of Orientalism on how the authors of the literature produced in colonial times were affected by the political and economical ideas of their time. Therefore, there is room to apply Said’s ideas to Conrad’s work mentioned earlier, which deals exactly with the same themes. Conrad as an author is influenced by the Orientalism and thus tries to portray this concept in his literature. Within the frame of Orientalism, stands out the idea that western society will never be able to feel equal to the oriental one, simply because they are different altogether. However, it is accepted that they can influence each other. Thus, the work of Conrad, even though it is not more that his own feeling and portrayal of imperialism, does entail within itself a particular message.

The Heart of Darkness shows the character of Marlow as an explorer hired by the Belgian Crown who goes travelling around the African colonies, questions his reality and what happens in that continent. He sees the misery of the colonized people and at the same time the misery of the Europeans colonizers, who get transformed in selfish, violent and wretched beings. In certain way, Marlow happens to witness the worst of human beings. He says: “…You know I hate, detest, and can’t bear a lie, not because I am straighter than the rest of us, but simply because it appals me. There is a taint of death, a flavour of mortality in lies— which is exactly what I hate and detest in the world— what I want to forget. It makes me miserable and sick, like biting something rotten would do.”

The experience of this expedition makes Marlow reflect on many things and makes him realize his own annoyance for the world he is experiencing. However, this annoyance, and the impossibility of making any change in the world he is into, causes him suffering. Moreover, he sees the colonized who are invaded and who feel alienated in their own land. The world that is shown through Marlow’s eyes goes to show that the human being who witnesses and who is part of this clash of cultures is the victim of a tragedy. This tragedy is at the basis of the concept of Orientalism since it presupposes the superiority of the imperial power as a race or nationality. This is precisely what Marlow sees. He sees the imperialist who controls everything just because he was born in Europe and he sees the subdued native who is not really sure of what it is happening since he does not naturally work under the codes he is ordered to follow. Thus, it is illustrated the impossibility of a true and genuine understanding between both worlds. The Orientalist prism is constructed around this impossibility, which will always be present, either in a very concrete affair such as commerce, or in a more abstract one, such as intellectual debate.

Both the Orientalist and the Imperialist see the Orient with western eyes alone, and try to understand and to use the Orient for their own selfish, utilitarian motives, as if it were some new scientific invention from which the Western can get benefitted from. This tragedy, which Marlow lives in the flesh and that begins with the death of Kurtz and the feelings of loneliness of his mistress, is the one that Said seeks to change. “…I should like also to have contributed here is a better understanding of the way cultural domination has operated. If this stimulates a new kind of dealing with the Orient, indeed if it eliminates the “Orient” and “Occident” altogether, then we shall have advanced a little in the process of what Raymond Williams has called the “unlearning” of “the inherent dominative mode?’” (Said, 1977). Evidently, Said comments this with a touch of irony, since he knows that trying to eliminate something inherent is impossible by simple logic. The “dominative mode”, being something inherent to the human being, is impossible to eradicate from their nature.

Both Said and Conrad speak about the tragedy of Orientalism in their own ways. Said argues that Orientalism entails inevitably Imperialism and the necessity of subjugation of a culture. So Orientalism it is based on interpreting the Orient in a simplistic and functional way for the West. On the other hand, this same tragedy of subjugation is what Marlow encounters in Africa. He understands that the parameters of European supremacy remain always unmet by the natives.

Orientalism in Heart Of darkness. (2016, Apr 01). Retrieved from http://studymoose.com/orientalism-in-heart-of-darkness-essay 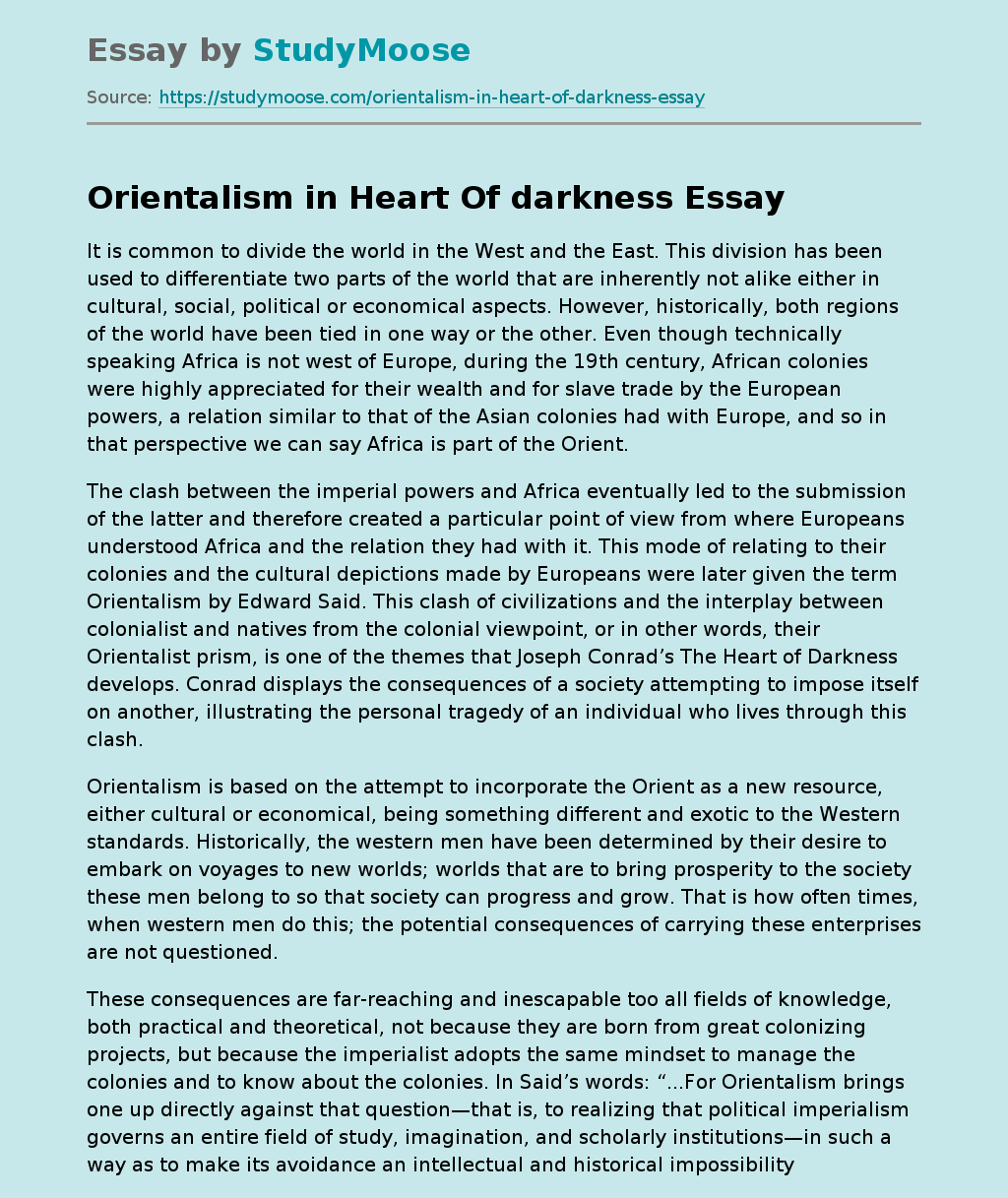