Edward Said’s analysis of Jane Austen’s narrative in her 3rd novel ‘Mansfield Park’ (1814) is based on his own studies of ‘orientalism’. This term is defined by Said as a variety of false assumptions /depictions of Eastern people within Western attitudes. This is achieved, he argues, through the literary discourse provided by post-enlightenment, post-colonial American/European (Western) authors. Said draws our attention to an underlying theme of ‘Mansfield Park’, which is empire. Said recycles his interpretation of stereotyped Muslims, Arabs & Egyptians and applies it again to a different social group.

He does so by examining the novels representation of the Atlantic slave trade (in the West Indies), and in turn concludes that Austen must support British values of imperialism and empire. He points out the ease with which Austen’s characters refer to Antigua, and convinces us that Austen’s infrequent use of this word is evidence of her personal support of the degradation of slaves.

In his analysis of the text, Said starts at the beginning, and relies heavily on the ignorant way in which Sir Thomas’s colony is isolated from his family and domicile, which remains proudly on English land, miles across the globe.

He implies that the slight references to Antigua do no justice to its own beauty, history, and the fact that it is, in comparison, a paradise island. However Austen does actually support this claim herself, as Lady Bertram does no justice to India, wanting only the commodities it can offer: “I may have a shawl.

I think I will have two shawls” His ultimate point is that the ‘Antigua’ seen in Mansfield Park is no more than a place for work, necessary for obtaining personal luxuries and fortune for the locals of Britain. Austen doesn’t deny this in her novel, but she doesn’t shout about it either. Said’s writing just reminds us of how unfair the situation was, by pointing out the geographical space in between Mansfield Park (where the money is spent and enjoyed) and the Antiguan sugar plantation (where the money is produced).

His critique of “the ease with which the family’s needs are met by a sojourn in the Caribbean” is unnecessary and useless in explaining his point, it merely serves to highlight the fact that the slave trade was, at its peak, very successfully organised and achieved, due to the political military force. “Sir Thomas’s means will be rather straitened, if the Antigua estate is to make such poor returns”, Mrs Norris’s comment proves that Austen is aware of the dependence of the family on their slave trade income, as is Lady Bertram, because her reply is: “Oh! that will soon be settled!”. Although his wife is unwilling to spend time talking on the subject, this type of ignorant attitude seems to be a convention of realism which Austen applies to her characters systemically, in hopes that their final outcomes will explain her own disposition on the subject. Said constantly alludes to Austen’s lack of concern for the slave trade, because her narrative lacks the description which is needed to properly illustrate the subject, and the setting.

Said argues that without the slave trade, the Bertram’s could not have been possible, but again, I believe Austen is fully aware of the fact that slavery enables the Bertram’s to flourish in Mansfield Park. Otherwise, she simply would not have written so much about wealth and class in relation to the success of women, for example in the end of Pride & Prejudice (1813) Lizzie chose love over money, and Mr Darcy chose love over class. Furthermore Austen includes the downfall of the slave industry within her narrative, and in turn she shows the downfall of Sir Thomas because of the latter. Sir Thomas is depicted (in the end) as having remorse for his actions, and having learned his lesson through redemption. Jane Austen is stereotyped by Said as a typical euro-centric academic, naïve towards the REAL threats, inequalities and unfairness’s of the world. Just like the slaves Sir Thomas had the advantage of owning, Fanny becomes the only slave who is able to dwell in Mansfield Park. I believe Austen’s hopes were that she would be seen as the epitome of the slave: “She could hardly believe it.

To be placed above so many elegant young women! It was treating her like her cousins!” Austen explains, from the very first chapter how the class/background ideas of the era are a hindrance to her success, at home and in society. Overall she is treated as below standard, but by the end of the novel she is happy, reasonably comfortable and is married to the one whom she was meant to be worth less than. She was constantly referred to as from a different class, background, and place. Those notions of ‘breeding’ compare her to a mere puppy: “breed her up with them from this time, and suppose her even to have the beauty of an angel, and she will never be more to either than a sister”. Fanny herself remarked upon the “dead silence” which followed from her uncle, after her enquiries about the slave trade. She concluded that because she showed “a curiosity and pleasure in his information which he must wish his own daughters feel” she regretted asking about the slave colony, as if she just re-realised that she isn’t fit to do certain things.

Her character reflects ideas of rank and persecution and oppression; she is the ultimate realist of the novel. With regard to the character of Sir Thomas and his silence on the subject of his work, Said would most likely argue that he is selfish and ignorant and therefore doesn’t permit any time being wasted on the subject. However, Austen is more likely treating the subject with the shame and embarrassment it deserves. It is my view that Austen would have been sympathetic towards these slaves and could not surely condone such hegemony, oppression and empire? After all she herself was a victim of oppression, being a female author unable to take credit and receive praise for her own work within society. Austen ended her life as a spinster, having never married a man, showing that she didn’t conform, for whatever reason(s), to social expectations of women. Moreover, her life was dependant on the males within her family, as per the UK’s laws regarding rights, inheritance and property, because she had nothing of her own.

Therefore she would be hypocritical to support the forced labour of slaves for the benefit of the nation she somewhat rejects. Supposing Austen was supportive of Britain’s imperialist venture for empire, surely someone with such priorities would have settled and married, just for wealth and security? This is summarised in Susan Fraiman’s writing: “Lacking the franchise, enjoying few property rights (and these because she was single), living as a dependent at the edge of her brother’s estate, and publishing her work anonymously, Austen was arguably a kind of exile in her own country” In conclusion I completely refute Edward Said’s claims toward Austen – his statements are judgemental and a little confused. Moreover, his attention to detail is lacking in research, as Fraiman cleverly states here: “So ready is Said to offer Austen as ‘Exhibit A’ in the case for culture’s endorsement of empire”.

Indeed the degradation of slaves was clearly fact, however, if Austen herself is an outsider to Mansfield Park and its narrative, then her opinions would be channelled through her characters’ fate. In my opinion, Said fails to take into account the fate of such characters, and the possibility that humans can exercise remorse and rehabilitation. Said draws the conclusion that Austen is lazily making trivial references to other important changes from this period, one being the Napoleonic revolution. However, I think that in the period and place she lived, it would have been nonsensical to openly critique the powers of the government, being that it really WAS un-just; it would have been too dangerous to do so. 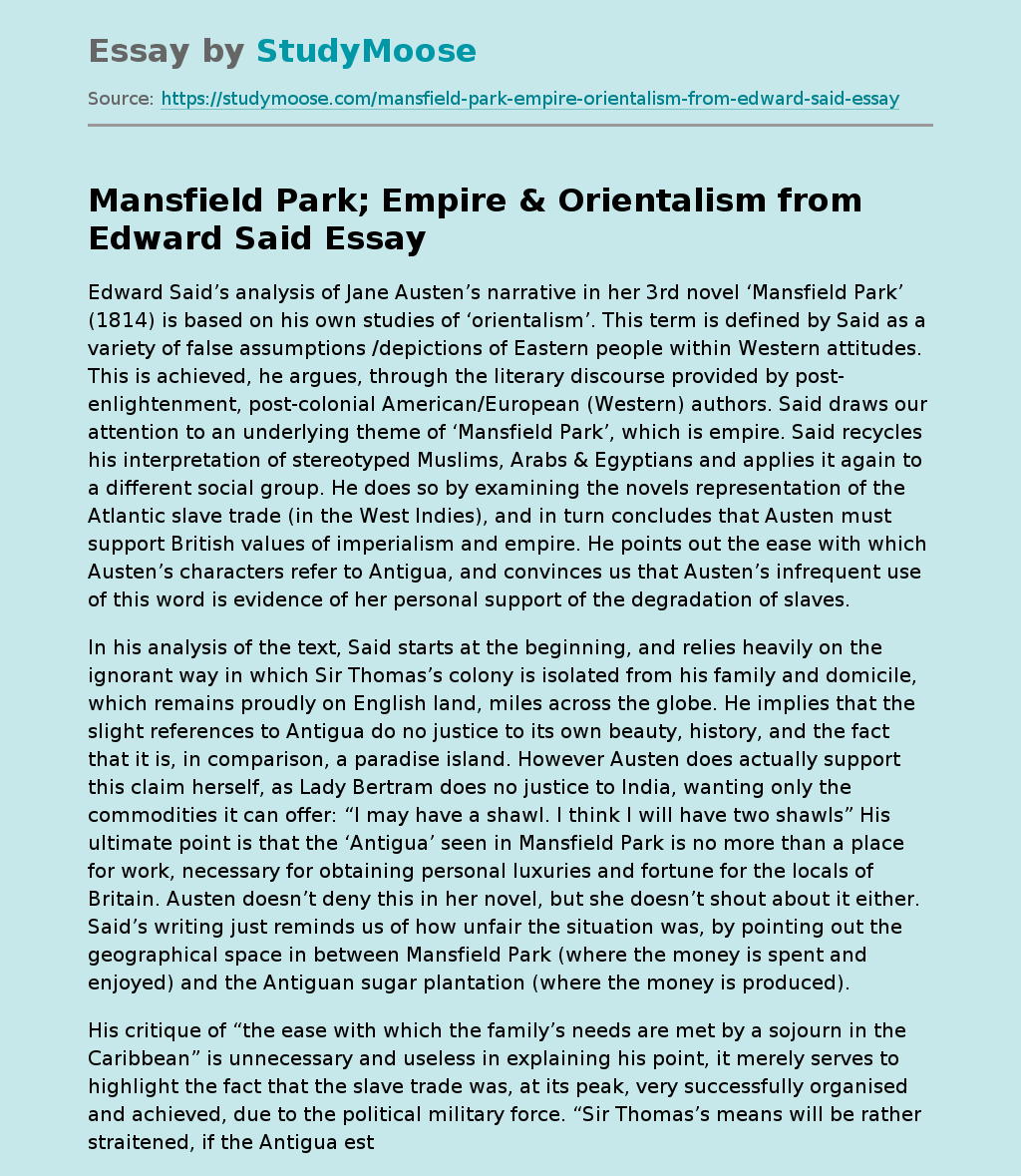