Presentation of Jackie from "My Mother Said I Never Should"

Throughout the play we see Jackie portrayed in different ways, her characteristics change and we see her grow as a person. Jackie as a child was very rebellious and through her life faces many challenges. Firstly as a young mother then later with the loss of her mother.

As a young woman in her teens Jackie is very rebellious we first see this when Jackie tells Margaret that she has slept with her boyfriend.

Don't use plagiarized sources. Get your custom essay on
“ Presentation of Jackie from “My Mother Said I Never Should” ”
Get custom paper
NEW! smart matching with writer

Jackie tries to make Margaret feel guilty and that it was all her fault that she had slept with her boyfriend. Her boyfriend parents allowed them to sleep together where as Margaret was against it, this is possibly going to make Jackie more likely to sleep with her boyfriend because it is against her mothers wishes. Jackie and her mother do not communicate well.

When Jackie wanted to tell Margaret she was on the pill Margaret had no idea because she had refused to talk about it and Jackie had seen the doctor on her own.

This also shows Jackie’s independent and determined spirit and the need to succeed on her own, especially when it comes to rising Rosie without her mothers help.

Although Jackie has to give Rosie up to her mother she is still very determined to finish art college because it is the one thing she can have and do well at without the help of her mother. As an older woman we see Jackie feeling a failure, even though she is a very successful business woman.

Her feeling of failure come from her past; giving up Rosie as a baby. “It doesn’t matter how much you succeed afterwards, if you’ve failed once.” Jackie has missed all of Rosies growing up and Margaret explains that she cannot make up those lost years, they have gone and passed now. “treats she’s had with you.” Jackie feels extremely guilty because her daughter has grown up and she has missed everything. Margaret tells Jackie “those are my years” meaning she has looked after Rosie all these years and Jackie does not realise what she has missed until she goes to Venice with Rosie.

Jackies relationships with her mother, grandmother and daughter develop throughout the play. The relationship that changes most, I think, is that between Jackie and Margaret. As discussed before we saw a lack of communication between the two. Margaret does not know that Jackie has slept with her boyfriend. “You said ‘tell me while we go round the garden centre’….remember?!” Margaret feels she has let her daughter and herself down because she did not listen to Jackie properly.

When Jackie is older she is concerned for her mother because Margaret was in pain. Jackie may feel responsible for her mothers illness and death firstly because of leaving Rosie with her, putting more stress on her. Also just before her mothers death she had visited and had had to leave to get to a meeting, therefore if she hadn’t had to go so quickly she would have been with her mother and I think that Jackie regrets very much the fact that rushed off, not realising how ill her mother was.

In a way Jackie makes her mother jealous. Margaret had to wait until she was married to have sex, but Jackie did not. Also Margaret may be jealous of Jackie’s independence because now Jackie is free from parental responsibilities. “S’okay Jackie, you have to travel lots, and your work’s the most important thing isn’t it.” This makes Margaret feel as if her job is not as good and worthwhile as Jackie’s and Rosie respects the job that Jackie does more.

Jackie and Doris have quite a close relationship. But they are very different. The first time we see Jackie and Doris together the first comment Jackie makes Doris ignores as she feels its not appropriate. This shows Doris takes the same tone with Jackie as she does with Margaret; avoiding difficult subjects and questions. There is a large generation gap between Jackie and Doris: Doris likes traditional things and her ‘utility’ Jackie likes more modern things. Jackie is much more open with Doris. At the end of Act One, Scene three Jackie hugs Doris but Doris hesitates. This shows Jackie does not mind been open with people.

Jackie and Rosie are very much the same in their opinions and they are very close. Because Rosie thinks Jackie is her sister they are much closer, more like friends. In out of time scenes Jackie and Rosie are best friends, even when they fall out, when they make up they renew their best friend bond, “truth is honestly, honesty is true, you keep your promise and I’ll keep you.” Jackie rarely sees Rosie because of her hectic lifestyle, but when she does see her it has to be special. When the house is left to Jackie she sees it as a punishment but Rosie knows it wasn’t. Because Jackie is Rosies mother she sees her as perfect, Jackie can find no faults. Like when Jackie finds one of Rosies paintings she thinks it is great but Rosie thinks it is rubbish because it is not the same standard as her “sisters”

Throughout the play we see Jackie changing. Not only her attitude but her lifestyle.

As a young person Jackie is rebellious. She does what she wants without asking her mother because of lack of communication. An example is when Jackie goes on the pill without telling her mother. “you can’t scare me, because I’m on the pill, OK?” As a young person Jackie does not care about other peoples opinions. She is free and does as she likes.

As Jackie grows up she starts to feel guilty about giving Rosie up. When Rosie and Jackie go away to Venice, this is when Jackie realises how much she has lost and what she has had to sacrifice in order to be successful. She also feels guilty because Margaret had to look after Rosie during the hard years; Margaret “sat up all night with the sick child”. Jackie is also responsible, she accepts that she has lost the best years. Jackie is also unable to form a close relationship with Rosie because she never gets to see her because of work.

In out of time scenes Jackie is the leader. She is the bravest of the four “let’s kill our mummies”. Rosie agrees but Doris and Margaret go home. Jackie is the leader of the group. I think this reflects her role in reality because she is set apart from the others by her determination and independence as a person. Jackie being the youngest too understand voodoo and spells which the others do not. Margaret and Doris get scared because their lives have now involved things like voodoo.

Jackie is probably the biggest contributor to themes, the main one being secrets. The largest secret kept throughout the book is that Jackie is Rosie’s mum, not Margaret. Everyone else apart from Rosie knows so they have to keep the secret and lie. Margaret has always thought that her looking after Rosie was for the better but it makes the relationship between Jackie and Margaret very tense and strained. Jackie tries to ask for Rosie back but she can’t bring herself to. Another theme is guilt each woman makes another feel guilty in someway. The biggest amount of guilt put on Jackie is the fact she had missed the best years of Rosie’s life and she can’t get them back, Margaret says “those are my years”.

Jackie always felt tension between her and Margaret and until Rosie found out she could not move on. Jackie knew that Rosie was really her daughter and I think that she felt embarrassed because she will always a sense of failure as long as her mother is looking after Rosie.

I think the piece of setting/clothing that shows Jackie best is when she and Rosie arise back from Venice. Jackie’s dress shows the fun, independent side of Jackie and her business suit shows her hard working, successful side.

Presentation of Jackie from "My Mother Said I Never Should". (2017, Sep 29). Retrieved from https://studymoose.com/presentation-of-jackie-from-my-mother-said-i-never-should-essay 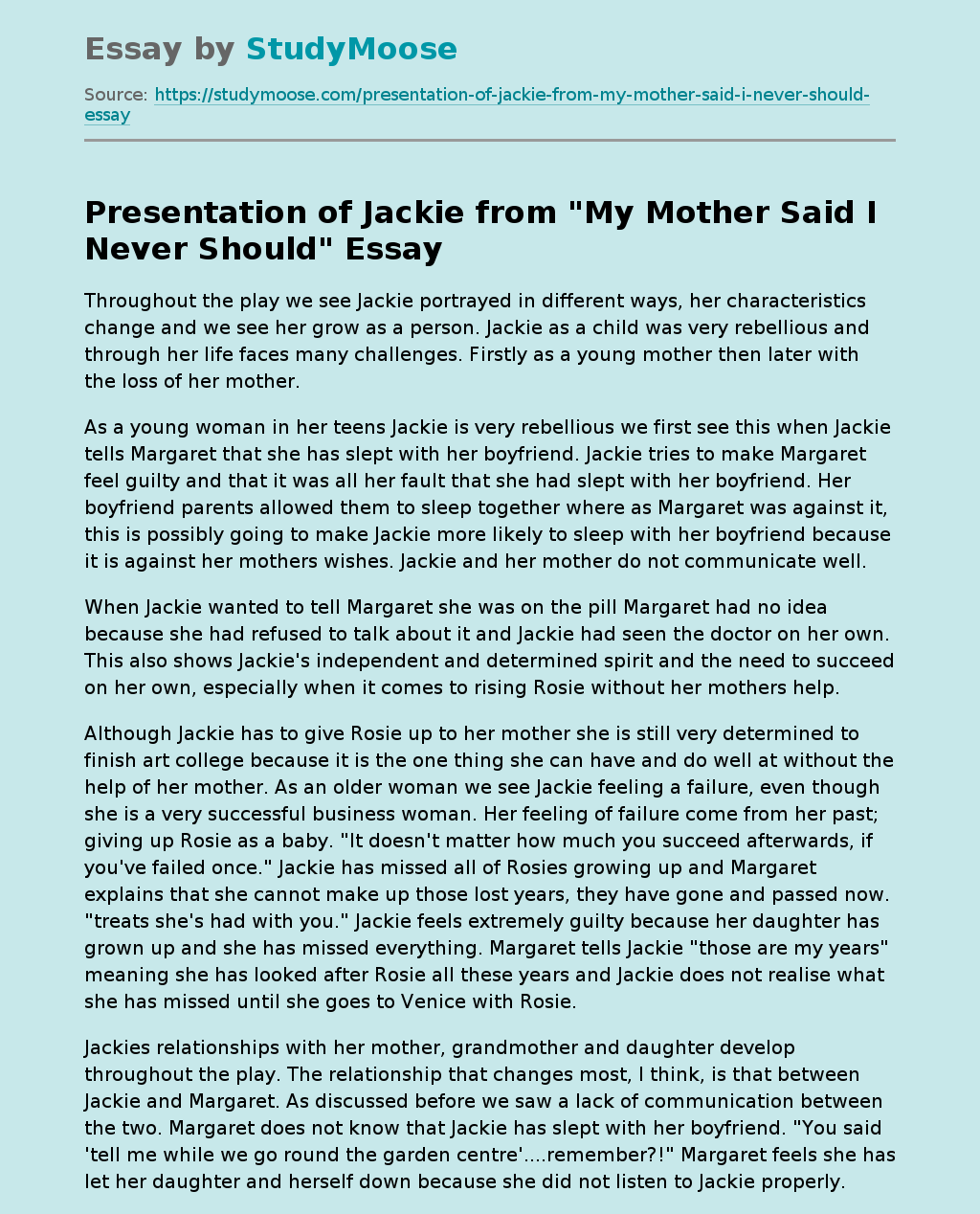