"The Adoption Papers" by Jackie Kay

The story of Jackie Kay’s life is as fascinating and complex as her literary works. The comparison is significant because several of Kay’s pieces spring from her biography and they are all concerned with the intricate nature of identity. Kay’s father was a black Nigerian visiting Edinburgh when he met Kay’s white Scottish mother. After he returned to Nigeria, the mother discovered she was pregnant and decided to give up the child. Kay was then adopted by a white Glaswegian couple with a strong commitment to radical politics.

Don't use plagiarized sources. Get your custom essay on
“ “The Adoption Papers” by Jackie Kay ”
Get custom paper
NEW! smart matching with writer

As Kay grew up she also began to identify herself as lesbian.

Kay’s writings reject easy platitudes and challenge readers to reject normative ideas of racial, sexual, and national identity. Although a poem like “The Adoption Papers” clearly stems from her autobiography, Kay uses biography as a starting ground from which to explore the broader conditions of multicultural Britain and identity in general. Rather than a narrow exploration of one unique life, Kay’s work has the power to challenge her readers’ expectations about the relation of self to other.

Yet even as Kay’s work discomforts, it allows many voices to speak in a way that builds empathy and understanding for characters however different they may seem.

By using three voices, the poem foregrounds the importance of perspective, so that the reader sees how adoption affects the three figures in significantly different ways. Kay expresses the birth mother’s pain of giving up a child through the contained quatrains, which make the birth mother seem indifferent but the paranoia of;

Shows that she is hiding her pain.

Her regret is expressed through the way she cannot drive the thought of her baby out of her mind: despite trying to distance herself from or disown her baby the thought obviously still lies at the back of her mind, brought across in the way she relates the ordinary feeling of “the constant chug” of the train to “a rocking cradle”. The birth mother tries to keeps these thoughts out of her mind by thinking about other things and the boring, uninteresting, trivial things she thinks of like “I forgot to put sugar in the flask” and the repetition of “Land moves like driven cattle” shows that they are just surfacing thoughts and that deep down she is thinking about her baby.

The birth mother’s need to forget about her baby is shown through the image of the birth mother burying the clothes she bought her baby because it is like she is burying the memory the memory of her child. The religious element of the baby “Lazarus” and the reading from the “book of Job” make it more realistic of a real burial ceremony, emphasising her need to forget completely. The naming of the child “Lazarus”, the name of the man Jesus raised from the dead, despite the child being a girl may represent the birth mother’s deep desire that the buried memory of the child may also be raised from the dead and the child will one day come back to her.

The daughter is angry at being judged while the adoptive mother is not. The short sentences, which the daughter speaks in, could be to represent Her age and her anger at being judged or thought of as different. The daughter has experienced racism first hand and her short, angry sentences with the boy’s taunting words not in speech marks shows how closely she is effected by the words. The birth mother has also experienced racism and talks of it with experience and ease shown through the flowing poetic imagery used to describe it. At the same time, the daughter conveys the questioning of self undergone by the adopted.

The poem emphasizes the idea that the birth tie is not a condition of authenticity and that “all this umbilical knot business is nonsense”.

The use of multiple voices in “The Adoption Papers” produces a powerful effect, generating empathy for all the characters even as, or because their identities are shown to be uncertain, constantly changing, and often dependent upon the perspectives of others. For example, the adoptive mother is anxious to hide signs of her radicalism, her Marxism, and work for the Campaign for Nuclear Disarmament, lest the adopting agency regard them as the marks of unfit parents. Meanwhile the birth mother wrestles with her thoughts about giving away the child. Most prominent are the ruminations of the daughter and adoptive mother as they ponder what counts as a “real mammy”.

As the daughter experiences doubts about who she is, the mother must wonder if the process of adoption can identify her as a true mother. As the title of the poem, “The Adoption Papers” indicates, identity can largely be a matter of paperwork, of what is found on paper not in the flesh. The birth mother signs away her role as mother – “my name signed on a dotted line” – and the daughter only gets to know her through a trail of paperwork. The adoptive mother also realizes” I’m not a mother/ until I’ve signed that piece of paper”.

The voices of the social worker, telling the adoptive mother that she is not a mother until she has “signed that piece of paper” and the boy’s taunting words of “Sambo sambo” not separated from the daughter’s words by speech marks shows how closely she is effected by the words emphasize that identity is not what we are born with but what we decide to make it – a manifestation of our desires.

Through “The Adoption Papers” Kay establishes adoption not only as an overt theme – the special subject of the adopted – but also as a metaphor for identity in general. In Kay’s work identity is never a given; adoption opens up the idea that identity is uncertain and in flux, but also something that does not have to remain the way it may naturally seem. Identity is regarded as a process of choices characters make about themselves, usually in reaction to the ideas and perceptions of others. The discussion of race is of particular interest here.

Even as race and racism are shown to have real effects, the poem shows race to be a matter of social perception not skin and biology. Because of the differences in race, the adoptive parents feel there is no reason to hide the truth of the daughter’s origins, thereby making family a choice and cultivated creation, rather than a given. In one of the more fascinating moments of the poem, the daughter discusses a poster on her bedroom wall of African-American activist Angela Davis, given to her by her parents. While they are passing on their passion for radical politics, she is confronted with her first mirror of

“the only female person

I’ve seen (except for a nurse on TV)

“The Adoption Papers” defends the idea that identity is constructed, but it also presents the daughter’s strong desire “to know my blood”.

The multiple voices of “The Adoption Papers” shows how much a character’s sense of identity is shaped by the lenses of how others see him or her and how characters may be forged by the perspectives and ideas of other people, but in the end other people can never really get to know them.

She attempts to show repeatedly in her work that identity is always at a crossroads of nation, race and gender and that no person bears the privilege of being more pure than another is. Moreover, Kay’s characters do not suffer from identity crises for being Black and Scottish or adopted, rather it is the characters troubled by the identities of others they do not understand that suffer the identity crises. The teacher has trouble understanding that the daughter is Scottish and when the daughter has trouble doing the Charleston, she says “I thought you people had it in your blood”. In this sense, Kay normalizes the different while questioning the sureties of the norm.

Jackie Kay’s work offers a remarkable set of literary tools for contemplating the complexity of identity. Race, gender, and nationality are markers that help people situate us, but they mostly block our ability to communicate and get to know each other, especially because of the reductive and simple notions people have of these markers. As much as we may resist, we are still made in the eyes of others. Kay’s work expresses a deep desire to allow for more complex pictures of identity and a hope that such an understanding may lead to greater acceptance of difference and to greater acts of communication and connection.

"The Adoption Papers" by Jackie Kay. (2016, Jun 22). Retrieved from https://studymoose.com/the-adoption-papers-by-jackie-kay-essay 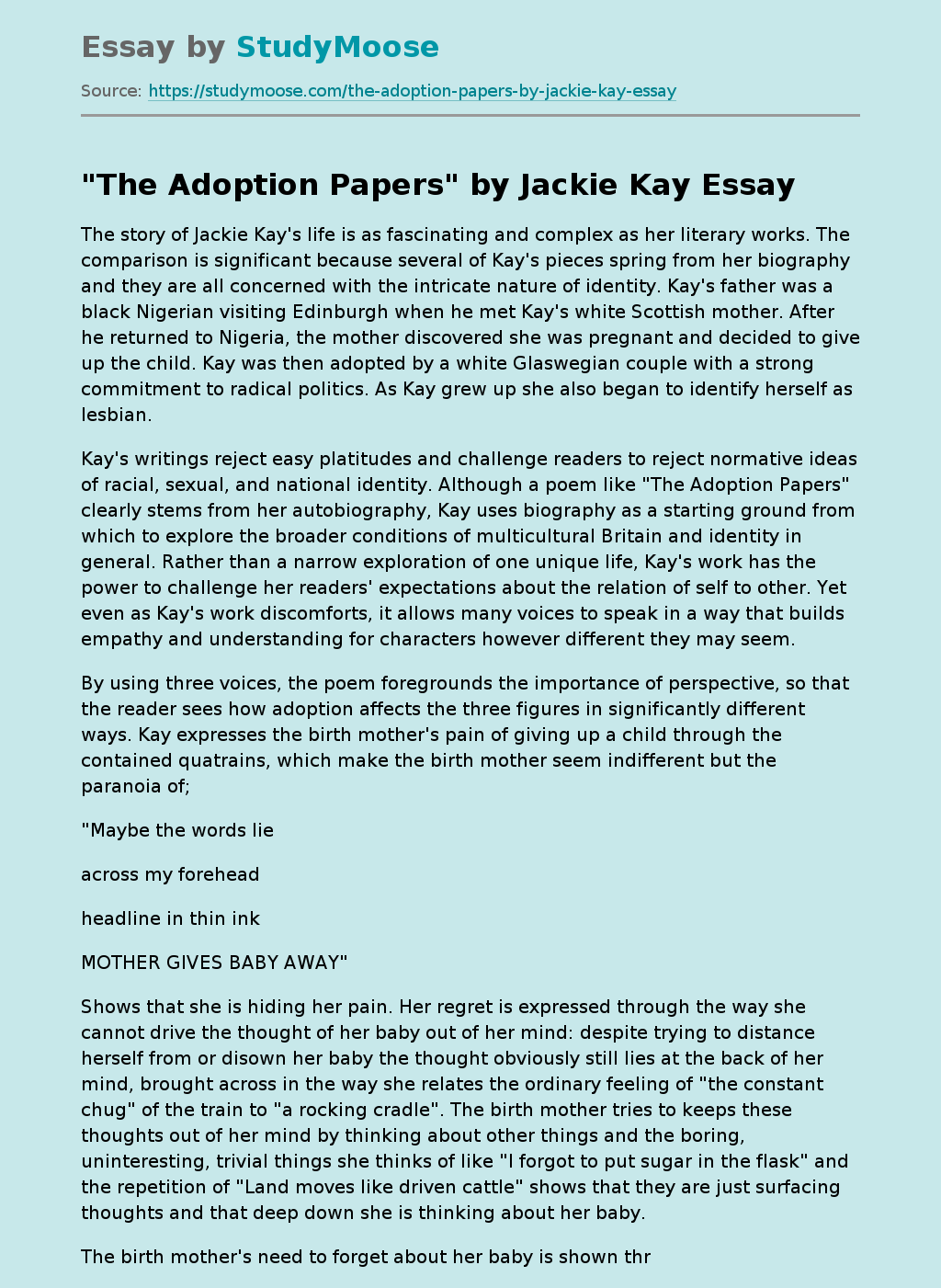