Story By phoebe Mary Kay Ash was a famous American businesswoman and the founder of Mary Kay Cosmetics. She started her business with a small investment of $5000 in 1963, and soon became one of the most successful business women of her time. Mary Kay Ash was born on 12th May, 1918 in Hot Wells, Harris County, Texas. Her childhood experiences shaped the future of this visionary woman, and with a significant impact to the American history. Due to the illness of her father, her mother worked for 14 hours a day at a local food restaurant to take care of the family, while Mary Kay looked after her father along since she was young.

Her mother always put the “you can do it” spirit in the young Mary’s mind. One time, Mary Kay’s mother went to work and she needed to take care of the illness father at home alone, she had to decoct medicine herbs for her father but she didn’t how to do it.

So she called her mother to teach her step by step on the phone, but little Mary Kay was afraid, but her mother said to her gently ”you can do it ” . Finally, she did it. Since then, this sentence has inspired her when she encountered difficulties.

When she was only seventeen years old, she married Ben Rogers then soon had three children, while her husband went to serve in World War II; she took the job of direct selling of books. Due to her amazing marketing skills, she earned an amazing $25,000 in just six months.

While Mary Kay was enjoying her professional success, things at the personal front weren’t that smooth. Her husband was killed on the battlefield, and left her with three children. After her divorce, Mary Kay took up a job with Stanley Home Products, a direct sales firm. She became very successful in selling home care products but didn’t get enough recognition for her work.

Her supervisors not only didn’t appreciate her work but also never raise her salaries. However, if a man did what she has done, somehow he can get an award. The inequality between men and women are very obvious in her workplace. So finally she resigned after worked very hard for 25 years in the firm, at the same time she learned a very important lesson of her life that men could not believe that a woman can be successful in business. Mary Kay turned her attention to writing a book, which eventually changed the course of her life and became a plan for her dream company that had innovative marketing plan for women.

But her accountant said that she will close down if you start to open it. It’s impossible, She has seen many of these cases that many people went bankrupt within six month. But Mary Kay never heard of it, she believed that she can do it well. In 1963, with an investment of $5000, only a 500 sq. feet store in Dallas, Texas, Mary Kay and her nine zealous beauty consultant started the Mary Kay Cosmetics Company; it was a direct cosmetic products selling company. In the first year of operation, they made a staggering profit of $200,000. In the two years time, Mary Kay Company was selling products worth one million dollars.

By this time, the company she created had become a worldwide enterprise with representatives in more than 30 markets. She applied the strategy of giving incentives over good work and started by giving pink Cadillac to the top salespersons of the year. The other incentives included diamond jewelry, bumblebee pins, and 5-star vacations. This strategy really worked and became one of the reasons for company’s success over the years. If you want, do it, you can, this is her famous wisdom and realized the dream for women and a better life of abundance with heart.

She also published three best-selling books during her lifetime. Her book, “Mary Kay on People Management”, another best seller was included in the business courses at Harvard Business School. Mary Kay received many honors and awards during and after her lifetime. In 1976, she received the Hall of fame Award from Direct Selling Association. Two years after that, in 1978, she got the Cosmetic Career Woman of the Year Award from the Cosmetics Career Women, Inc. The same year she received the Horatio Alger Distinguished American Citizen Award from Horatio Alger Association and so on.

Mary Kay Ash passed away on 22nd Nov, 2001. She was buried in the Sparkman-Hillcrest Memorial Park Cemetery in Dallas, Texas. She is the greatest women I paid my full respect to her. She gives women the courage to fulfill our dream not only in Mary Kay Company but also another business sectors and proved that not only men can be successful in business but also women can be. Yes, she did it. It’s a very good piece of work, the detail information are very clear. But it will be a good idea to give one or two more examples on how she relate idea of “you can do it” in her later successful business life. 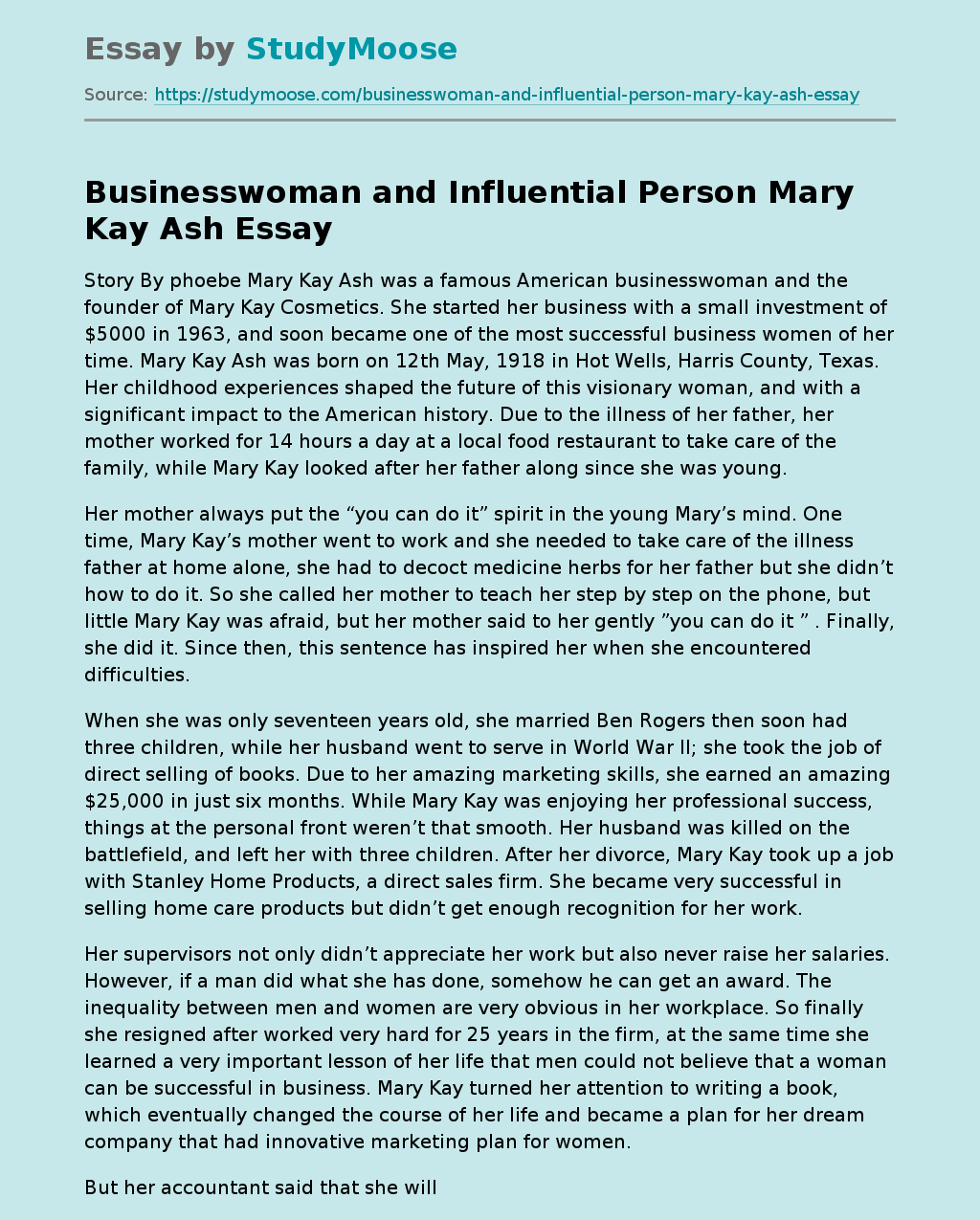