I could not find the necessary evaluation sheet for the ash girl, so I have used the sheet for Macbeth, but I believe that the questions are similar in context, and will try to include extra to compensate for parts that may not be specified otherwise.

For our interpretation of the ash girl, we chose to focus on human characteristics, and what effects the 7 deadly sins would afflict them with. We chose this style of representation as the strong feature of the play is the illustration of the sins in the key characters, and why they cause certain events.

Don't use plagiarized sources. Get your custom essay on
“ Drama Evaluation – The Ash Girl ”
Get custom paper
NEW! smart matching with writer

To incorporate this into our piece, we acted as humans with strong features as their corresponding sins, we also included the qualities of the equivalent animals, in our intonation and presence. We felt that if we used the animalistic approach it may detract from the motif used in this piece, (the illustration of the sins in the key characters, and why they cause certain events).

We used the original setting of the forest, but at the same time we tried to interpret a contemporary and simplistic approach from a very structurally complex piece, with many characters and ongoing ideas, themes and motifs. Our aims in particular, were to convey to the audience how the sins react with the characters to form a basis of understanding in context to the rest of the play. We wanted to express how important the sins were in the development of the whole play as a structure, and how the sins cans be suggested through key characters.

We initially wished to use all methods of technical effects, lighting, audio, props and even our positioning on the stage and how this can be expressed through out characters. For lighting our characters all have an assigned colour, which in the right environment would create an atmosphere of that quality. We chose them according to folklore and general belief. The following are our selections;

We chose the colour blue for Pridefly as it has connotations of respect and hierarchy. The colour of RAF uniform is also blue; we felt this was key as the character is a fly. Slothworm is a very dull, slow, lethargic and utmost boring creature to be around, we chose a dull boring colour for him, something neutral with no bright colours. Angerbird was primarily always going to be the colour red. Obviously through connotations of the colour, we automatically respond to the colour red with anger, fear, bloodshed, war, but sometimes passion for things. In this case, Angerbird who feels so passionately about killing and destruction should have two different juxtaposed connotations side by side as they do in the right context actually compliment each other. Greedmonkey, has the colour yellow is for the most part it has connotations of happiness, brightness, quick pace, the sun, fun, however like Angerbird and the colour red there are also dualities that compliment each other such as cheekiness, sneakiness and slyness.

We interpretated Greedmonkey as someone who regularly steals and this can be shown through the combination of being a rather quick minded person, always jumping from certain ideas to another, but at the same time calculating, slow and rather sneaky physically. Envysnake was another easy combination with the colour green. We subconsciously associate green with envy, and jealousy. Possibly because of many phrases heard, such as: “sick with envy” or “green with envy”. We used these colours as lighting, so that when each character was introduced or had a significant part in the piece, we could create an aura to incorporate the theme, which in turn would strengthen our piece by helping the audience visually relate to the character. We also had decided to produce a forest setting with the lights, using a selection of plates and gel films, to create the illusion of a forest.

We originally wished to use audio in our piece, out main aim was to create sounds of the forest, and also a selection of songs, which had a surreal and abstract feel to them, i.e.) some that were short listed were angel by massive attack, and a song by Iron Maiden. The use of a repeating bass line and no vocals in Angel would have not distracted the audience from the drama, and it was also a rather spooky, and very surreal song. We never got round to discussing which Iron Maiden song we might use, however in general, it would have added to the atmosphere of supernatural, as the sins are supernatural, abnormal creatures.

We decided to not use a song, as we then went for a contemporary setting which focuses more on the dramatisation of the piece and not the auditory effects. Props were generally if needed, and we didn’t really go as far as to say that they were compulsory, as we felt that props were not needed to all characters. Props that we did use were to develop the story or to reinforce characterisation. For example, David Edgar who played Pridefly used a walking stick. Aynslie Carnan who played Greedmonkey stole, my characters, (Envysnake’s), jewellery, which I used as a prop. David Roberts who played Slothworm used a sleeping bag to create the sleep theme, and to produce the look of a worm.

In our piece, I played Envysnake. Overall, Envysnake has snide, envious, superior personal traits. I wanted the audience to feel this through instead of being jealous with was very hard to play, being vain, superior and conceited, which would give the same kind of effect but in a more psychologically demanding way, as it involves causing the audience to become envious and to empathise with her. The secondary feature of this is that it also brings out envious features in the characters on stage. This technique is far more effective than just acting envy, as the creature inflicts envy on others, and by using the other technique that is exactly what it does.

Vocally I added a very soft, innocent accent, as I believe contradiction of the intonation increases the effect of the dramatisation. I incorporated the snake idea into my accent; to do this I exaggerated the sibilance in the script, to create a hissing sound. I did not focus on movement much as an aspect of dramatisation. We felt that clear positions on stage were necessary to stop distraction from the main points, this is incorporated in out contemporary theme, this way we had less movement on stage and less confusion. However if I had used movement primarily, I would use a walk, which appeared to flow, and slink across the stage, as she is a snake.

I personally dread performing, and am more of a theoretic student rather than practical. I feel that my fear of performing since my last Macbeth practical, had made me nervous and caused a great lack of my confidence in acting this affected my flow of dialogue and also my mental attitude towards performing. To improve on this, I would encourage my group to attend regular rehearsals, and make sure that we have practiced thoroughly at least 3 times before doing our final assessed performance..

I was most pleased with the contemporary attitude we took to the piece. When many students are given opportunities to include various pieces of media, whether it be auditory or just lighting, I feel it can be abused, and when overused it detracts from the actual piece. I also believe that people may use it to cover blemishes. We chose this style to make the audience focus more on the dramatisation and the feel of the piece and its meanings. The factors, which affected the sucsess of the piece, were probably lack of proper rehearsals. We couldn’t get enough practice from the time when we decided what styles we would choose. However I don’t feel it affected the piece significantly. However there were prompts needed for a few members of the group, which did break the flow in some places but only slightly. 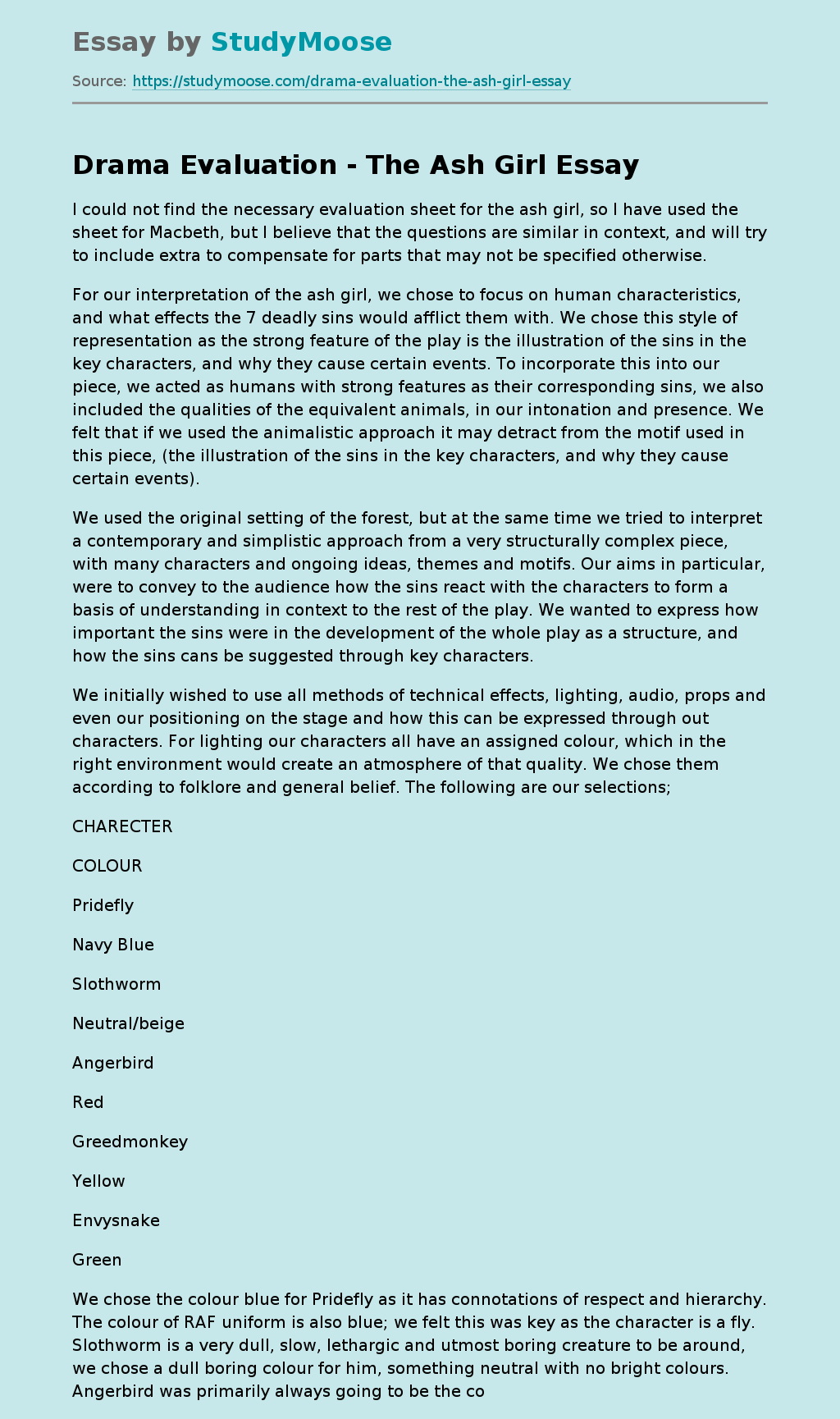