Conflict is the essence of drama

Don't use plagiarized sources. Get your custom essay on
“ Conflict is the essence of drama ”
Get custom paper
NEW! smart matching with writer

Audiences find an unchanging play that follows routine to be boring and hopes to find differences. Thus, changes are necessary in drama for it to demand a reaction from the audiences that’s maintained, so that they can keep focused to the play. In Oedipus, changes occur from the beginning of the play to the end.

Oedipus doesn’t go through a normal life as being a king or live a happy life with his wife, but experiences through a catastrophe that influences his life.

Critical changes are brought out by conflict at certain moments and introduce newness to drama, for example when Jocasta discovers that Oedipus is the child she sent years ago. The conflict is within Jocasta herself, of sinfully being both a wife and mother of Oedipus. Also the conflict is between her and people of Thebes, including Oedipus, where the normal relationship has been destroyed.

These two conflicts mean a dramatic change in Jocasta herself, and for the play, as it moves on acknowledging the effects of these changes.

Similarly, in “Macbeth”, changes are brought out throughout the play, enriched by conflicts within characters, such as Macbeth, and conflicts between characters, such as between Lady Macbeth and Macbeth. The two monologs of Macbeth shows his inner conflict between his consciences and his ambition, which slowly drives him towards murdering the king. The vast change in his inner mind based on the conflict sets the basis for the play and leads to the potential consequences that happen later. Conflict between Lady Macbeth and Macbeth occurs when Lady Macbeth accuses her husband of not being a man to have the courage murder. Changes are brought out as Macbeth becomes more firm and aggressive towards the murder, which then affects direction of the whole play by moving closer towards the murder and gives the audiences anticipation towards the killing. This brings a sense of delight in the audiences to keep them focused to the play.

By having conflicts which leads to changes, drama is forwarded along with the reactions from the audiences.

At the same time conflict forwards a play, conflict also shows character of the characters. In “Oedipus”, conflict is presented between characters such as between the Terisias the priest and Oedipus. The technique of stichomythic dialogue is used when the two have a conflict in their conversation, to show the characters’ emotions, especially Oedipus’s pride. Short, fast sentences are used when Oedipus hears Teiresias’s accusation on him, he says “Shall I bear more of this…” and Teiresias answers “I will. The stichomythic dialogue shows Oedipus’s jealousy and his tyranny behavior. By being not able to see the warning language of Terisias, he’s also shown to be arrogant. His conversation with Creon further shows his arrogance and hubris. Again, stichomythic dialogue is used when Oedipus says “By no means. I would have you dead, not banished” and Creon answers “if you can show in what way I have wronged you”.

In “Macbeth”, conflict within Macbeth himself shows his character. In Shakespeare’s portrayal of Macbeth, there’s resolution and irresolution, there’s decision and indecision, all which describes his character. During the two long monologs, his relentless ambition fights with his conscience, showing the opposing two sides of his inner character. When Macbeth sees the dagger hanging in front of him, he mentions he thinks not of them and that “there’s no such thing”, but it is indeed ironic because he’s mind is actually focused on them. The irony shows his character, the fighting between trying to remain conscience by not thinking of them and murdering the king. He mentions the dagger as a “false creation”, but in his deep heart desires to use it.

Along with showing character, conflict shows their realizations, and more, makes also the audiences to realize. With “Oedipus”, audiences realize the effect of hubris of people, after seeing how Oedipus experiences his downfall. Audiences realize how the dominating emotions of arrogance, jealousy, pride affect Oedipus in refusal to recognize his wrongness. The paradox of Terisias of being physically blind but sees things correctly in terms of morality further contrasts with Oedipus’s emotion, and further encourages the audiences to realize hubris. Although in “Oedipus”, realizations happen while the audiences have a certain outline, some knowledge on the play, audiences still experience the play differently, since it is live. However, this is not true with “Macbeth”, as history of the play is made up as going along. Audiences realize the consequences of Macbeth after murdering the king by seeing that, in the end, he dies in the battle.

Characters themselves also have realizations in drama, usually at critical moments where conflict makes the play changes its plot dramatically. Oedipus’s realization of him being the son of Laius comes slowly, but also catastrophically. Again, the tension of the realization is built up using stichomythic dialogues. Oedipus realizes that he can never go back to where he was. His conflict lies in that he wishes to return to being the king as before, but the truth does not allow him to do so. Similarly, In “Macbeth”, realization of Macbeth comes with his action of murdering the king. There is clearly a feeling of being scared of others discovering their actions inside Macbeth and Lady Macbeth after murdering the king, as they rhetorically question the noise of the surroundings. Also, Macbeth mentions” I’ll go no more. I am afraid to think what I have done”, suggesting he realizes the dangers that would occur to him if his actions were discovered.

Conflict in drama projects meaning, though it might not project a resolution to the problem at the end of the play. The end of one conflict in the play doesn’t necessary mean that there will be no future conflicts. In “Oedipus”, the fall of Oedipus doesn’t indicate the problem of the nation has been solved, but on the contrary, there might be other arrogant tyrants like Oedipus in the future. However, the story of “Oedipus” somehow teaches the audiences to be morally good, therefore it has a meaning.

Similarly, in “Macbeth”, the tragedy of Macbeth and Lady Macbeth teaches audiences to realize that following a path similar to them will lead to destruction. Duncan’s speeches of gracefulness, loyalty, honor, honesty and integrity are meant to project moral rightness, therefore to teach morally. Still, there’s no final resolution at the end of the play and it may mean that there will be other tyrants like Macbeth in the future. However, the play itself has projected meanings which, attracts audiences to watch it because simply no one would be interested in a play with no meanings.

In conclusion, conflict does not only perform the basic functions for drama, such as forwarding the play, but conflict’s main effect is that it makes drama more interesting, which is essential to attract audiences. Changes are brought out by conflict that introduces something different, and something new. Also, characters in drama are shown vividly through conflict. Conflict projects meaning, create realizations of the audiences and characters, with all of this, it makes drama fascinating and irregular.

Conflict is the essence of drama. (2017, Oct 21). Retrieved from http://studymoose.com/conflict-is-the-essence-of-drama-essay 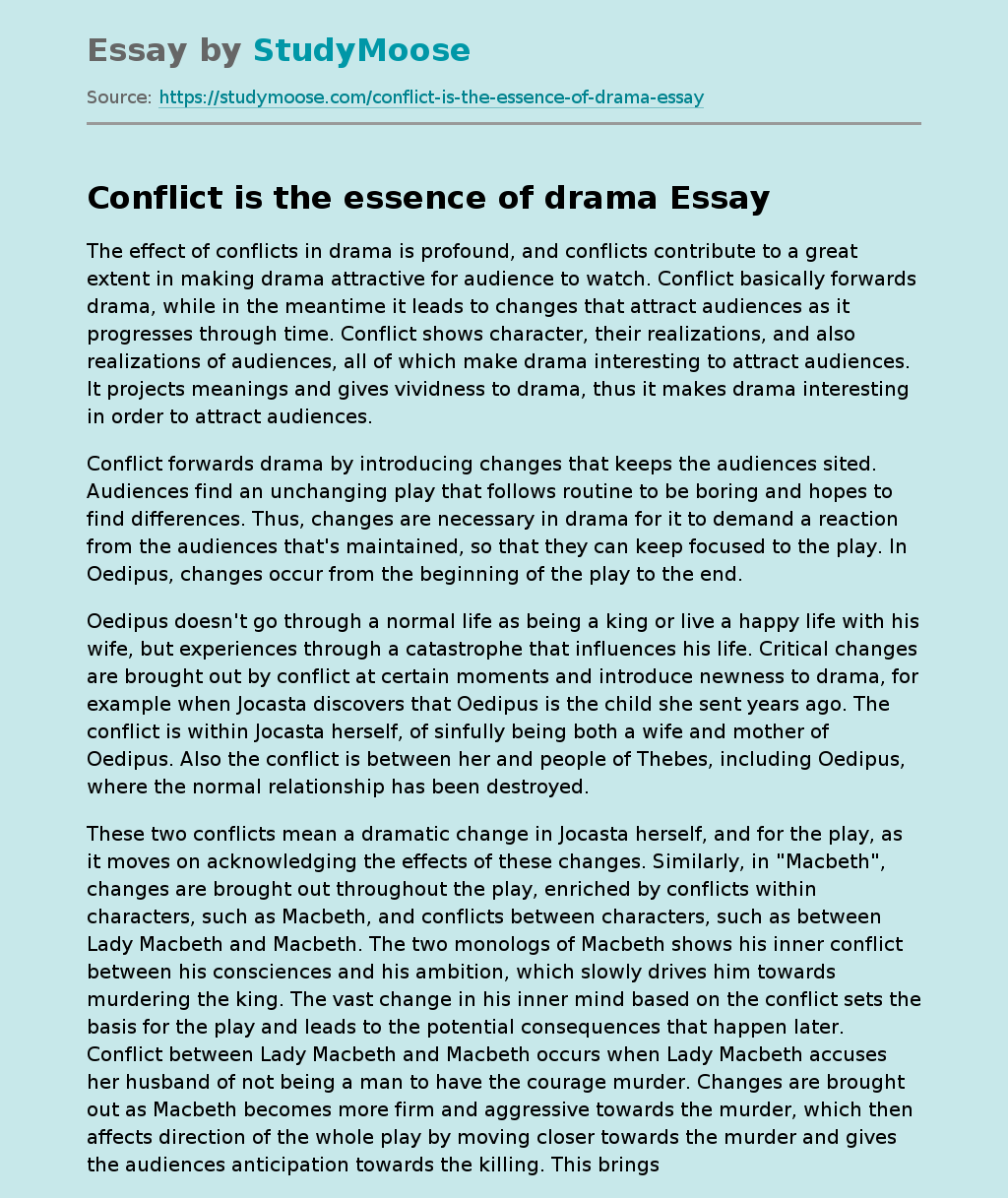