Drama is the specific mode of fiction represented in performance. [1] The term comes from a Greek word “dran” meaning “action” which is derived from “to do” or “to act”. Drama is an art form that explores human conflict and tension. It generally takes the form of a story presented to an audience through dialogue and action. The story is conveyed using the elements of the theatre: acting, costumes, props, scenery, lighting, music, and sound. Drama has an emotional and intellectual impact on both the participants and audience members.

It holds up a mirror for us to examine ourselves, deepening our understanding of human motivation and behavior.

It broadens our perspective through stories that portray life from different points of view, cultures, and time periods. Types of Drama There are many forms of Drama. Here is a non-exhaustive list with a simple explanation of each: Improvisation / Let’s Pretend A scene is set, either by the teacher or the children, and then with little or no time to prepare a script the students perform before the class.

Role Plays Students are given a particular role in a scripted play. After rehearsal the play is performed for the class, school or parents. Mime

Children use only facial expressions and body language to pass on a message tcript to the rest of the class. Masked Drama The main props are masks. Children then feel less inhibited to perform and overact while participating in this form of drama. Children are given specific parts to play with a formal script.

Using only their voices they must create the full picture for the rest of the class. Interpreting content and expressing it using only the voice. Puppet Plays Children use puppets to say and do things that they may feel too inhibited to say or do themselves. Performance Poetry

* Characters: Characters are the people (sometimes animals or ideas) portrayed by the actors in the play. It is the characters who move the action, or plot, of the play forward. * Dialogue: This refers to the words written by the playwright and spoken by the characters in the play. The dialogue helps move the action of the play along. * Music/Rhythm: While music is often featured in drama, in this case Aristotle was referring to the rhythm of the actors’ voices as they speak. * Spectacle: This refers to the visual elements of a play: sets, costumes, special effects, etc.

Spectacle is everything that the audience sees as they watch the play. In modern theater, this list has changed slightly, although you will notice that many of the elements remain the same. The list of essential elements in modern theater are: * Character * Plot * Theme * Dialogue * Convention * Genre * Audience The first four, character, plot, theme and dialogue remain the same, but the following additions are now also considered essential elements of drama. * Convention: These are the techniques and methods used by the playwright and director to create the desired stylistic effect.

* Genre: Genre refers to the type of play. Some examples of different genres include, comedy, tragedy, mystery and historical play. * Audience: This is the group of people who watch the play. Many playwrights and actors consider the audience to be the most important element of drama, as all of the effort put in to writing and producing a play is for the enjoyment of the audience http://newtestamentyouths. org/index. php? option=com_content&view=article&id=84:drama-classification-and-descriptions&catid=39:congress-talent-showcase&Itemid=58 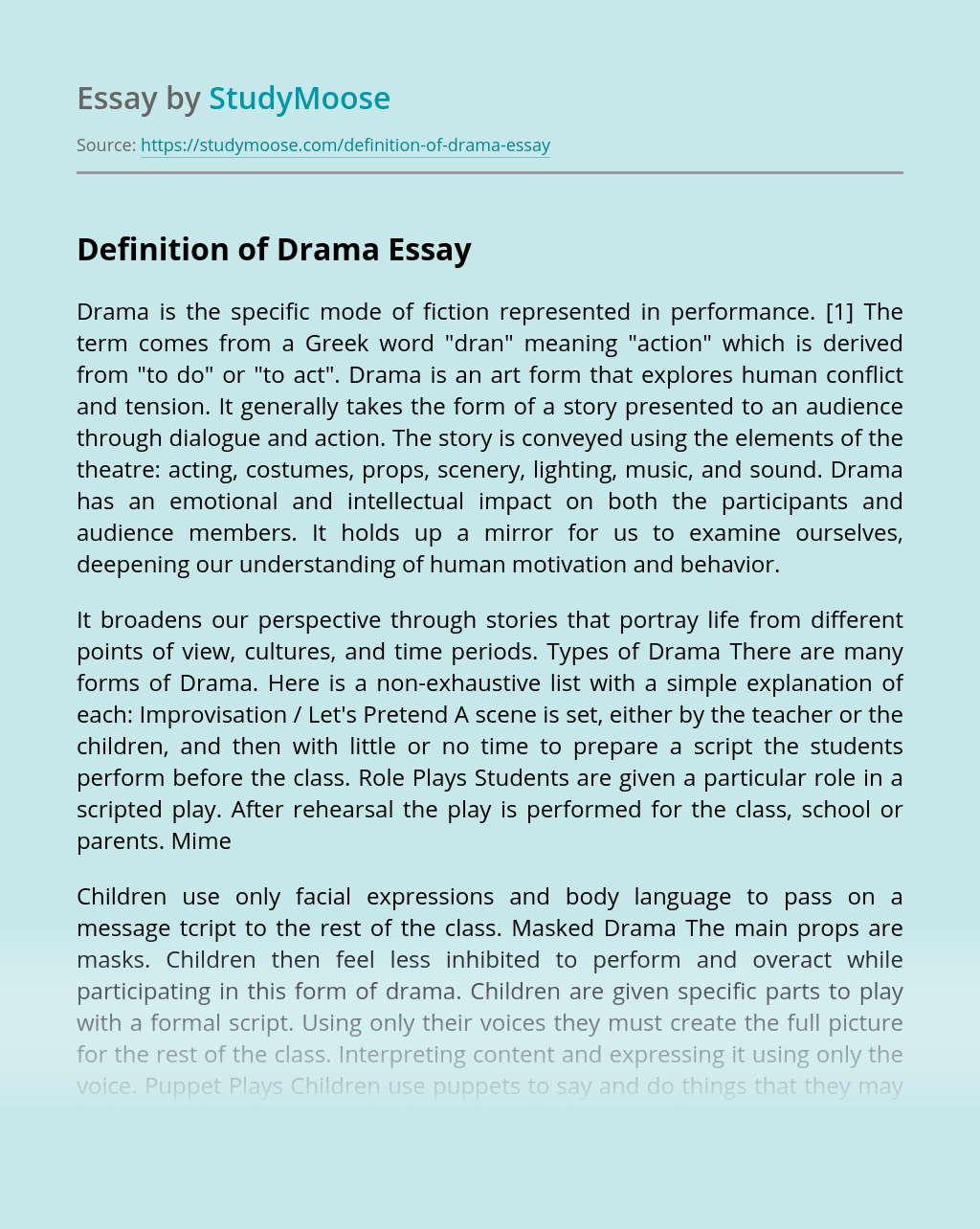