The Essential elements of drama are present in any play that you see, but the ideas have changed slightly over the years. Aristotle was the first to write about these essential elements, more than two thousand years ago, yet we still discuss his list when talking about what makes the best drama. Aristotle considered six things to be essential to good drama. Plot, Character, Theme, dialogue, music/rhythm and spectacle. In modern theater, this list has changed slightly, although many of the elements remain the same.

Don't use plagiarized sources.
Get Your Custom Essay on Elements of Drama Just from $13,9/Page

The list of essential elements in modern theater are:

Plot: It is the sequence of events or incidents of which the story is composed. It refers to the action; the basic storyline of the play. Characters: They are the figures that acts in a play. a Flat character is known by one or two traits; a Round character is complex and many-sided; a Stock character is a stereotyped character; a Static character remains the same from the beginning of the plot to the end; and a Dynamic (developing) character undergoes permanent change.

This change must be:

Theme: While plot refers to the action of the play, theme refers to the meaning of the play. Theme is the main idea or lesson to be learned from the play. In some cases, the theme of a play is obvious; other times it is quite subtle. Conflict:

It is a clash of actions, ideas, desires or wills. A conflict is a person against person, a person against environment or a person against herself/himself. Spectacle: It refers to the visual elements of a play: sets, costumes and special effects. Spectacle is everything that the audience sees as they watch the play. Genre: Genre refers to the type of play. Some examples of different genres include, comedy, tragedy, mystery and historical play.

Dialogue: This refers to the words written by the playwright and spoken by the characters in the play. The dialogue helps move the action of the play along. Music/Rhythm: While music is often featured in drama, in this case Aristotle was referring to the rhythm of the actors’ voices as they speak.

Convention: These are the techniques and methods used by the playwright and director to create the desired stylistic effect.

Audience: This is the group of people who watch the play. Many playwrights and actors consider the audience to be the most important element of drama, as all of the effort put in to writing and producing a play is for the enjoyment of the audience. 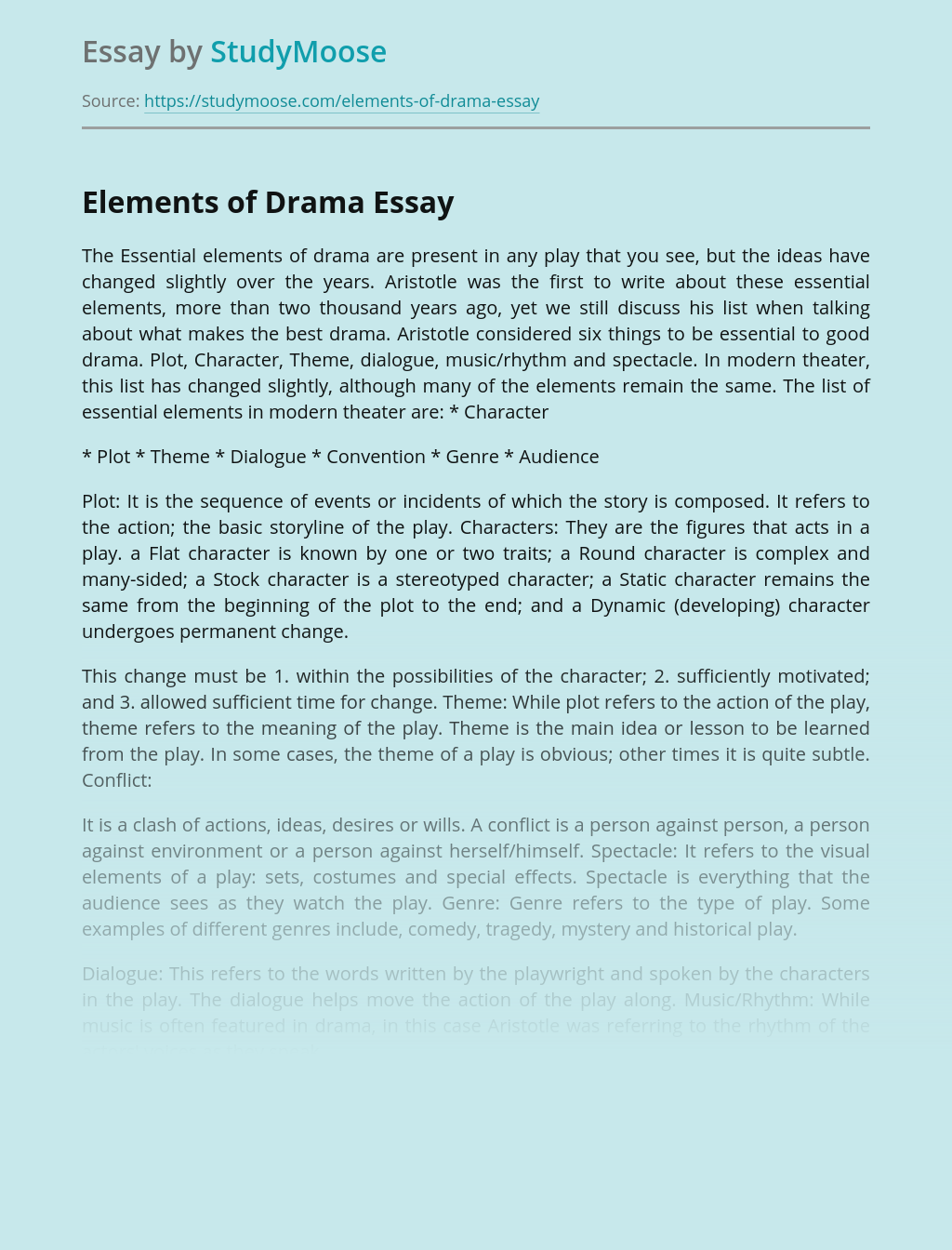 Rate this post Henrik Johan Ibsen was a modern realistic dramatist. He is though of, by many authors and playwrights as the “father of modern drama”. Ibsen was considered a great national treasure by the Norwegians. Henrik Ibsen wrote many controversial plays which dealt with gender discrimination. The plays highlighted the struggles Victorian women went...

Rate this post T.S.ELIOT is one of the great drametists in English literary worlde. From his literature, we can feel the great aesthetic pleasure. I have studied various plays included in my course. But “murder in cathedral” really different in them. It has its own greatness and the literary heights. Poetic form Eliot felt, is...

Get Essay
Justive vs. Injustice in Mad Shadows

Rate this post “Her mother Louise, who was rich and owned many farms, gave her daughter all the most menial chores in order to devote her life and her remaining youth to Patrice” (Blais 16) Shuns daughter because of her ugly appearance “Exasperated, she swallowed her fury, her heart crying out for justice. But rebellion...

Rate this post Genre is a term that is used to classify or describe a type or form of literature. While this sounds like a simple concept, it in actuality is a very complicated classing system. The reason for the complication is that literature does not always follow the typical characteristics set up by that...

Rate this post a. Comedy? When we talk about comedy, we usually refer to plays that are light in tone, and that typically have happy endings. The intent of a comedic play is to make the audience laugh. In modern theater, there are many different styles of comedy, ranging from realistic stories, where the humor...