"The Duchess of Malfi" by John Webster Drama Analysis

The Tragedy of the Dutchesse of Malfy, originally published under this name in 1623, is a Jacobean drama written by John Webster in 1612-13. The play starts off as a love story with the Duchess secretly marrying the steward of the household Antonio; a man beneath her class who she has fallen in love with. This marriage immediately shows the Duchess’ “princely powers” by defying the wishes of her brothers, Ferdinand and the Cardinal, to not marry again after being widowed. “The Duchess of Malfi is ostensibly a story of resistance of a wilful widow who actively defies her brothers’ wishes and refuses to be constrained by (male) authority” (Bartels 420).

Don't use plagiarized sources. Get your custom essay on
“ “The Duchess of Malfi” by John Webster Drama Analysis ”
Get custom paper
NEW! smart matching with writer

Webster portrays her brother Ferdinand’s power as a corrupted duplicate of an ideal. An ideal that the Duchess reaches through the drag of patriarchy. However the play ends as a tragedy with the deaths of almost all the major characters in the play.

The Duchess of Malfi contains a lot of stage violence and horror especially in the later scenes which attracted many visitors.

However this is not the reason Webster’s play is a great English renaissance drama. The poetic language usage by Webster and the complex characters should ultimately receive the credits. The focus in this paper will be on the complexity of the Duchess’ character and especially on her comment in Act III, scene 2: “For know, whether I am doomed to live or die, I can do both like a prince.” (Webster 1603). Furthermore the exploration of the theme of entrapment, or imprisonment, which plays a predominant role throughout the play, with the Duchess being caged up like a bird and a prisoner in her own body.

“Why should only I, of all the other princes of the world, be cased up, like a holy relic?” (Webster 1605). In Act III, scene 2 a contrast is clearly noticeable, the opening of the scene is very playful and shows the love between the Duchess and Antonio.

This is quite a contrast with the first time they were alone, when the Duchess awkwardly woos her own steward. By now they have grown accustomed to each other and they even freely joke about sexual matters in front of Cariola, the Duchess’ woman, at which Antonio says “Indeed, my rule is only in the night” (Webster 1601). This passage is utterly telling, because the Duchess then takes charge after this comment showing the strength of her mind and action. But then the Duchess’ brother comes in disrupting their secret world and giving way to his incestuous behaviour towards his sister. His entrance eradicates the setting and this would have been the last time that the Duchess and her Antonio enjoy their married life in peace.

Ferdinand most definitely wants to control his sister and have power over her; although he claims to only have a concern about the family’s reputation. Nonetheless his incestuous feelings lay just under the surface in this scene and it becomes clear he wants to control her body and her soul. In the face of death the strength of the Duchess’ character shines through even more being defiant and unrepentant. She is a tough Lady and she takes the initiative in planning an escape with her husband Antonio, again she takes charge and not the man in the picture. His bold words are never matched with action leaving his wife to take charge; another clear sign of gender contrast in this play. A final contrast in this scene is the Duchess too easily confiding in Bosola, gentleman of the horse to the Duchess and spy to her brother (a further sign of depredation and evil on Ferdinand’s part), with her attempt to think of a cover story for the escape which is easily being seen through by Bosola.

This is in itself a snare that she so rashly accepts the advice of the traitorous Bosola. Another significant part of the play is the theme of confinement and entrapment. The Duchess of Malfi is trapped and the only way to liberate her soul is through death. Bosola is hired to keep track on the Duchess’ actions, Ferdinand and the Cardinal set a trap for the Duchess which will lead to her death. Ferdinand warns her what will happen “Your darkest actions, nay, your privatest thoughts, will come to light.” when she gets caught she will be killed (Webster 1580). The spying activities by Bosola take years to come up with the results that the brothers of the Duchess want, but they have a prompt effect on the life of the Duchess. Her emotions and movements are restricted and her secret marriage is indeed “the entrance into some prison” (Webster 1580). She is not only restricted in this, but also trapped in her class role “we are forced to woo, because none dare woo us” (Webster 1583).

Furthermore the theme of betrayal is present in the play, through brutal entrapment, when Antonio’s recognizes that Bosola is trying to sabotage him. This happens after the birth of his first child, a baby so fragile it is opposite to a soul being imprisoned in the body. Which is reflected in Ferdinand’s outburst “Foolish men, That e’er will trust their honor in a bark made of so slight weak bulrush as is woman, apt every minute to sink it!” (Webster 1597). The theme of the Duchess being caged as a bird is further emphasized by the fact that her brother Ferdinand plays around with her before having her killed. Yet in Act IV the images of imprisonment are shown most often. It is suggested that the Duchess is being held captive, in her own hall, as a punishment and kept there as if she were insane. Cariola tries to comfort her “to shake this durance off” (Webster 1621), but the Duchess can only think of Bosola’s words and her reply is as follows “The robin redbreast and the nightingale never live long in cages” (Webster 1621). She feels like a corral bird and is certain she won’t live long anymore.

And indeed later in Act IV the Duchess is killed by strangulation by the hands of an executioner. Bosola showing her the “last presence chamber” (Webster 1624) could be marked as a final symbol of her imprisonment, which the Duchess thinks of as confinement that will lead to freedom. She is not afraid of dying and stays brave in the face of her upcoming death. In the end retribution takes over, Ferdinand imagining himself a wolf and going mad over this. Furthermore the Cardinal dies by the hand of the now remorseful Bosola, who in turn is killed by Ferdinand ( he is also killed by Bosola ). And Bosola had already killed Antonio confusing him for the Cardinal. In this play the Duchess is transformed from a tragic figure into a triumphal one, through imagery and signs that play a compelling role. With her character easy to recognise in a culture built on simulation and impressions, and the significance of gender playing a role.

Although in part The Duchess of Malfi exaggerates what men can do to women, more importantly, at its core, it shows what women can do to men. The duchess’ advances really are exceptional especially for a female character on the stage in that time. The play deepens this significance by highlighting the pressures that are all around her. It is the Duchess that conclusively gets the last word, because even after her death her voice echoes from the grave. She is “Duchess of Malfi still” (Webster 1624).

"The Duchess of Malfi" by John Webster Drama Analysis. (2016, Mar 12). Retrieved from https://studymoose.com/the-duchess-of-malfi-drama-analysis-essay 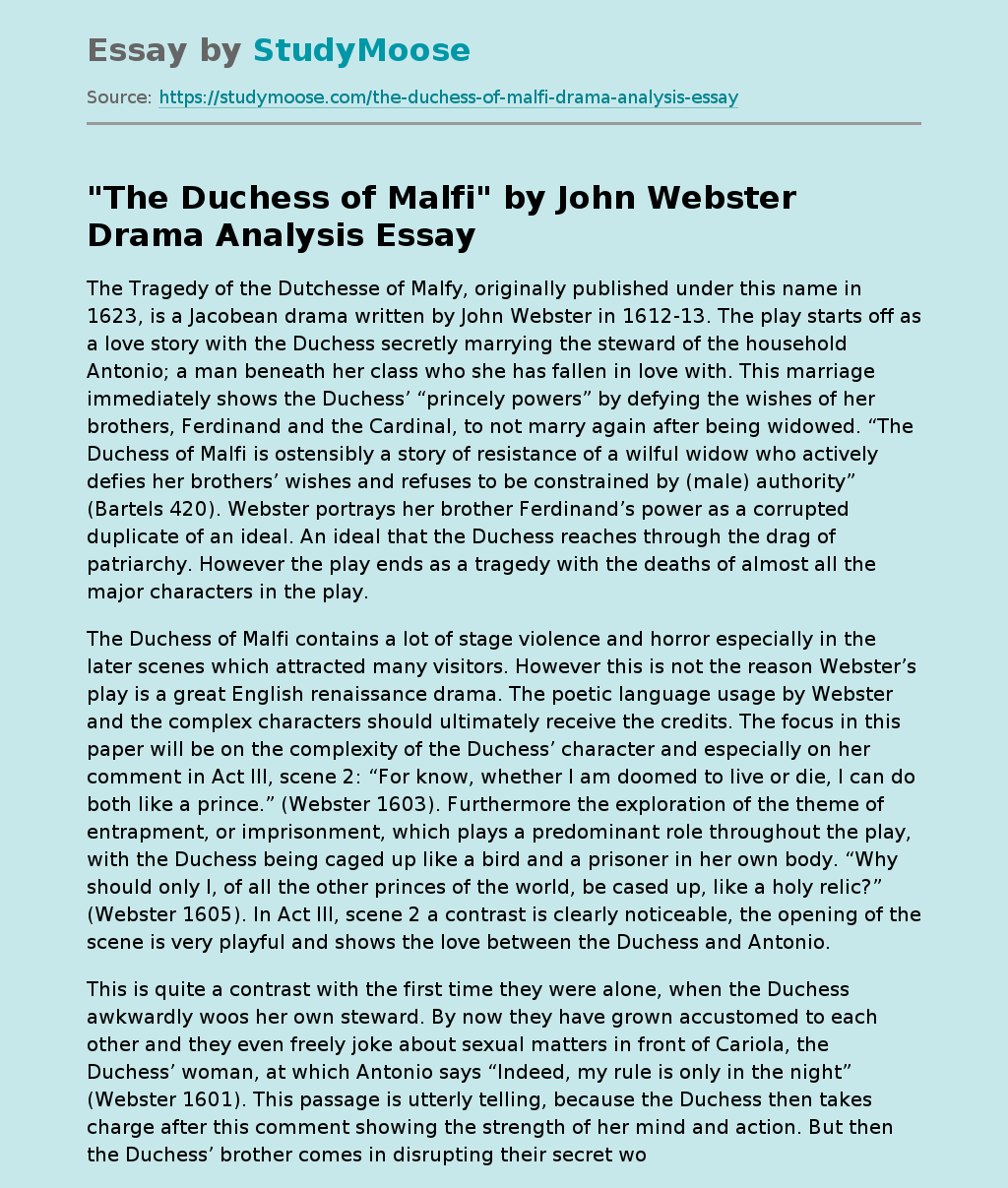