Nora Helmer frolics about in the first act, behaves desperately in the second, and gains a stark sense of reality during the finale of Henrik Ibsen’s A Doll’s House. Ibsen was one of a few pioneers of the new theatrical movement of realism, and accordingly he is often called the father of modern drama. The character of Nora lives in a dream world, a childlike fantasy, where everything is perfect, and everything makes sense, but as the play develops, Nora transforms and finds the strength to leave her home and her children in order to find out who she is and what she wants out of life.

Turn in your highest-quality paper
Get a qualified writer to help you with
“ A Dolls House, Drama Analysis, Realism and Naturalism ”
Get high-quality paper
NEW! AI matching with writers

Nora leaves the role of the doll child and doll wife and becomes an independent self-thinking adult. She realizes that the world is different than she always thought it was, and that she herself is also different. The play opens a door onto the social problems that many face but never speak of.

Since Ibsen’s time, women have made great strides in gaining the choice to determine their role in relation to the family and society.

A Doll’s House uses the character of Nora Helmer to show the transformation that takes place from dependent house wife to independent adult. The theme of A Doll’s House, a woman’s right to individual self-fulfillment, was considered highly subversive in an age when women were not allowed to conduct business without the authority of a father or husband. Wives and daughters were considered to be property, thus lending to women acting childish and naive.

The character of Nora exhibits many of these juvenile and immature qualities. The audience first sees her when she returns from a seemingly extravagant Christmas shopping excursion. She eats a few desserts which she has secretly purchased. When her condescending husband, Torvald Helmer, asks if she has been sneaking macaroons, she denies it whole-heartedly. The Narrator tells us, “She takes a bag of macaroons out of her pocket and eats one or two; then she walks stealthily across and listens at her husband’s door” (Ibsen 1681).

With this minor act of deception, the audience learns that Nora is quite capable of lying. She is most child-like when she interacts with her husband. She behaves playfully yet obediently in his presence, always coaxing favors from him instead of communicating as equals. Torvald gently reprimands Nora throughout the play, and Nora good-naturedly responds to his criticism showing how immature and dependent she is. However, Nora has been leading a double life. She has not been thoughtlessly spending their money. Rather she has been scrimping and saving to pay off a secret debt. Years ago, when her husband became ill, Nora forged her father’s signature to receive a loan to save Torvald’s life. The fact that she never told Torvald about this arrangement reveals several aspects of her character. For one, the audience no longer sees Nora as the sheltered, care-free wife of a banker. She knows what it means to struggle and take risks. In addition, the act of concealing the ill-gotten loan signifies Nora’s independent streak as stated in the line, “Daddy never gave us a penny. I was the one who raised the money” (Ibsen 1688).

She is proud of the sacrifice she has made. Although she says nothing to Torvald, she brags about her actions with her old friend Mrs. Linde. Basically, she believes that her husband would undergo just as many hardships, if not more, for her sake. However, her perception of her husband’s devotion is quite misplaced. Nora is evolving and is showing an independent side to her personality. When the disgruntled Krogstad threatens to reveal the truth about her forgery, Nora realizes that she has potentially brought scandal upon her husband’s good name. She begins to question her own morality, something she has never done before. Did she do something wrong? Was it not the right thing to do, under the circumstances? Will the courts convict her? Is she an improper wife? Is she a terrible mother? Nora contemplates suicide as a means to eliminate the dishonor she has wrought upon her family. She seems to lose all grasp of reality as she declares, “Never, never. Oh, that black icy water. Oh, that bottomless…! If only it were all over! He’s got it now. Now he’s reading it” (Ibsen 1727).

Yet, it remains debatable as to whether or not she would truly follow through and jump in the icy river. During the climactic scene in Act III, Nora seems to stall before running out into the night to end her life. Nora is frantic and changing into an adult by confronting the inevitable future that faces her. She realizes that it is always darkest before the dawn. Nora’s epiphany occurs when the truth is finally revealed. As Torvald unleashes his disgust towards Nora and her crime of forgery, the protagonist realizes that her husband is a very different person than she once believed. Torvald declairs, “I’m done for, a miserable failure, and it’s all the fault of a feather-brained woman” (Ibsen 1727). Torvald has no intention of taking the blame for Nora’s crime. She thought for certain that he would selflessly give up everything for her. When he fails to do this, she accepts the fact that their marriage has been an illusion. Their false devotion has been merely play acting.

She has been his “child-wife” and his “doll.” The monologue in which she calmly confronts Torvald serves as one of Ibsen’s finest moments. Some argue that Nora leaves her home purely because she is selfish. She does not want to forgive Torvald. She would rather start another life than try to fix her existing one. Or perhaps she feels that Torvald was right, that she is a child who knows nothing of the world. Since she knows so little about herself or society, she feels that she is an inadequate mother and wife. She leaves the children because she feels it is for their benefit, painful as it may be to her. Nora Helmer’s last words are hopeful, yet her final action is less optimistic. She leaves Torvald explaining that there is a slight chance they could become man and wife once again, but only if a “miracle of miracles” occurred.

This gives Torvald a brief ray of hope. However, Nora exits through the hall door, symbolizing the finality of their relationship. Nora has reached her final breaking point and has evolved from childlike to mature and decisive. A Doll’s House, with its multi-level characters, opens a door onto real problems facing the most common of marriages. Although, Ibsen’s views differed from those held by many modern feminists, he firmly believed that women were inherently suited to being mothers and wives. However, he also felt that a husband and wife should live as equal partners, free to become their own human beings. The play shines a spotlight on problems that few women were willing to talk about. The so called perfect life of Nora Helmer in A Doll’s House highlights the changes from child to adult in a very short time and proves the point that it is never too late to change. 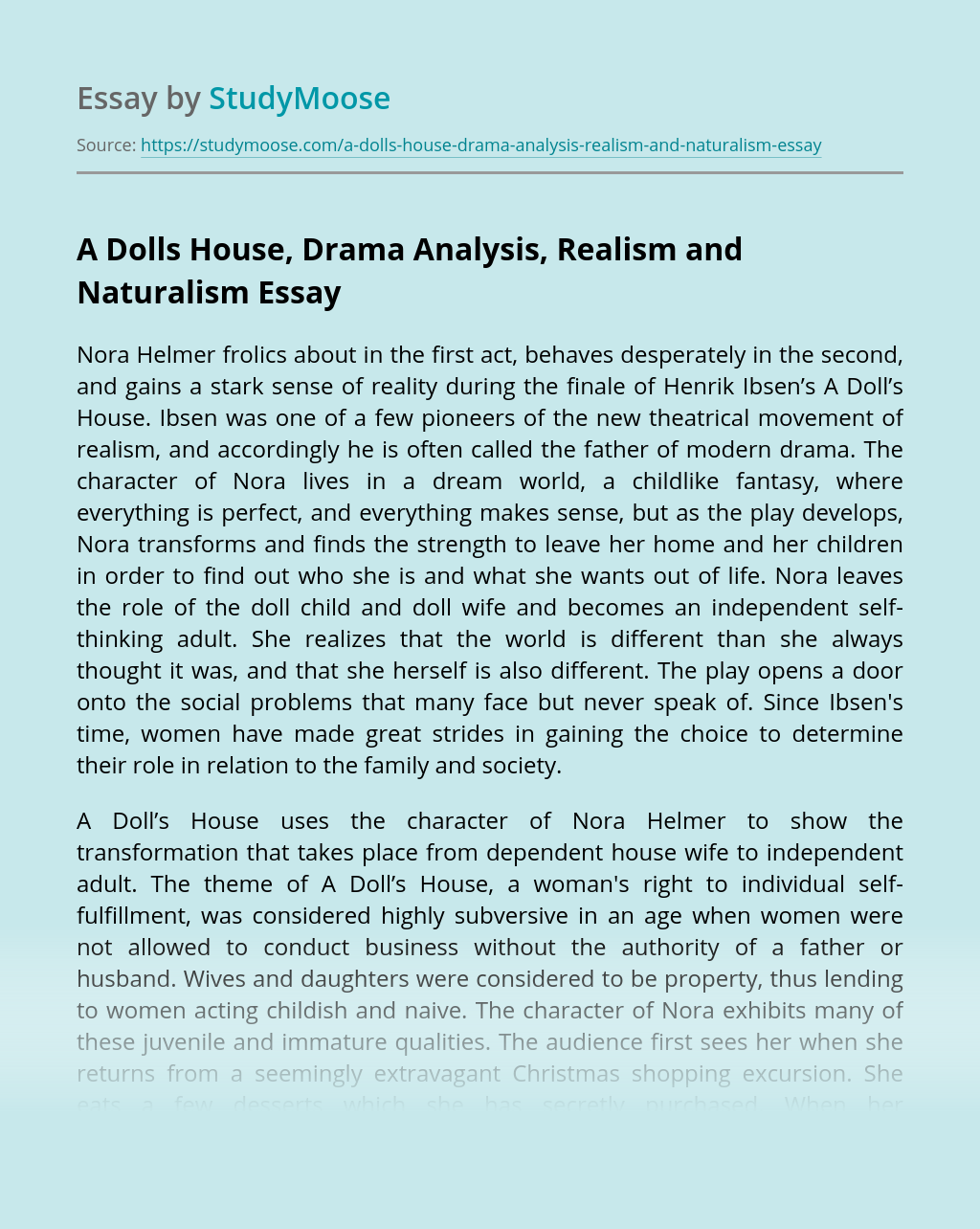 Turn in your highest-quality paper
Get a qualified writer to help you with
“ A Dolls House, Drama Analysis, Realism and Naturalism ”
Get high-quality paper
Helping students since 2015
Stay Safe, Stay Original