Throughout the history of theatre there have been many schools and styles. Theatre is ever changing as a reflection of society and what society wants. But out of all these styles, there are two which, when blended, produce a type of theatre that can always live and flow with society and not drastically alter to fit in with the world’s ever changing ways. These are Realism and Naturalism. When combined, they form a powerful, truthful and powerfully real theatre. The two men who have best managed to best combine these two elements are Konstantin Stanislavski with his “system,” and Anton Chekov with his dramatic writings and specifically, with his work in The Cherry Orchard

The main beliefs of Realism and Naturalism are that the theatre needs to shun melodrama and spectacle and, instead, present something that is real and true to life.

Don't use plagiarized sources.
Get Your Custom Essay on Realism and Naturalism Just from $13,9/Page

They believe that the most influential factors in a person’s life are heredity and environment, and they feel that the characters shown need to be more that two dimensional stock characters.

They need to have real motives and emotions and possess all the complexities that go into making a true personality and a true person. Naturalists feel that plays should not be written in any sort of dramatic sequence or structure because that is not true to life. Realists embrace the desire for reality on stage, but also feel that dramatic structure follows the actual structure of life and structure and poetry should be integral parts of drama.

Konstantin Stanislavski felt that same need for reality on the stage. He spent the majority of his life searching for how an actor can create truth on stage and, in doing so, he tapped into many of the same veins of humanity that Naturalists and Realists did. He expressed the same desire of Naturalists for a realistic theatre that shows life with its dramatic structure and intrigue. “. . . I was beginning to look for genuine life in [the theatre], not ordinary life, of course, but artistic life” (Bentley, 220). And he went looking for it the same way that realists and naturalists did. He began to look for a natural order for things and to devise a systematic plan from that natural base. He went looking for truth. And, again, he found it in the same place as the Naturalists and realists did. He found that, for an actor to bring full life to a character and full reality to the stage, he must both create a character with a real soul, and he must not rely on stage tricks to do so. “An actor, [Stanislavski] thought, must have some sort of spiritual preparation before the beginning of a performance. Not only his body, but also his spirit must put on new clothes” (222).

This type of acting blends perfectly with realistic drama, which contains characters whose souls are inherent to the script. He did not, however, feel that he was subscribing to either school of thought. He stated that he felt that realism and naturalism were not things that needed to be pushed onto the stage, but when a good actor takes on the role and fully builds his character from the inside out and truly lives the reality of the stage, reality will flow from it with out outside help. “As soon as [the realism] is justified, it becomes either unnecessary or it is not noticed at all . . .” (229). Stanislavski embraced the same ideas of the Realist and Naturalist thinkers, but he didn’t place the emphasis on them. Instead, he felt they would emerge as soon as the actor fully filled the role.

And no one wrote better roles for this approach to theatre that Anton Chekov. Chekov was able to write plays that embodied the idea of true, artistic life, and The Cherry Orchard is a shining example of that. He takes a moment that has dramatic appeal and is emotionally charged, and recreates it in a way that is true to life and yet exaggerated at the same time. He creates a reality that is so real, it almost appears fake. However, it is this style of drama that is a perfect vehicle for Stanislavski’s system of acting. As Barrault says in his essay “Why The Cherry Orchard?.” “The Cherry Orchard is one of the few plays in which a whole cast could really get so profoundly lost as to cease to believe that they are in a theatre, and believe on the contrary that this family truly exists and that they are in real life . . .”

That was Stanislavski’s goal for his actors. That was the ultimate peak to reach. So why is this not Naturalism if the actors create a full reality? Also, he creates this complete reality, yet it is a reality steeped in poetry and lyric. So why is it not Realism if he creates truth through poetry? As Barrault says, “This play belongs neither to the naturalism of the beginning of the century nor to realism, it belongs to truth, and truth always has two faces, a real one, and a poetic one.”

And that is the true form that theatre should take. It doesn’t have to be one way or the other, as the Realists and the Naturalists seem to think. True reality is a blend of both. And Chekov was the master of that form. He so cleanly blended the two ideas that it is impossible to separate them into separate places. And through this masterpiece of dramatic writing, Stanislavski’s systematic method of creating truth can have a fighting chance at reaching the heights that it is capable of. So it is that through a mixture of the two schools of thought and the work of the two men who have mastered it that theatre can reach a point of beauty and truth and can display reality and drama in a way that doesn’t need to adapt with the changes of life because it is based in life. The theatre that emerges from this blend has its roots deep in the heart of humanity and what people truly want, and, consequently, will never die. 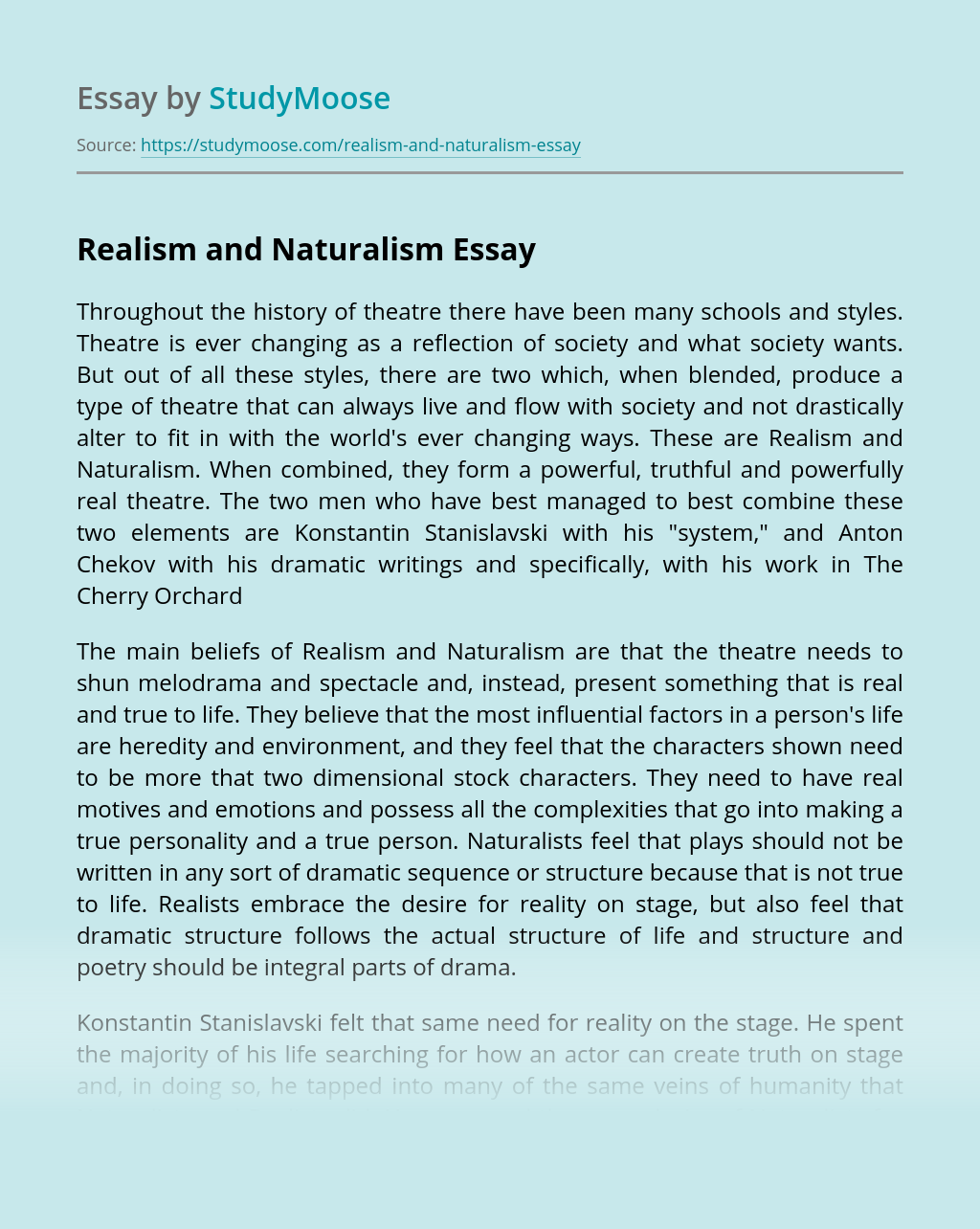 Representation of ethics in the stage dramas of Pakistan

It is a sad reality that : vulgarity and obscenity has corrupted our theaters as commercialization has become their main motive , this paper discusses these issues. Stage dramas are related to our society and culture, they were the part of our society and will remain, however modern changes have taken place . Dances and...

The predominating influence in determining Shaw to turn to the drama was the example of Ibsen and equally prominent was his love of debating, in which he had shown how irresistible it was for him to counter his arguments himself if no one else would. These influential strains compelled him to choose the kind of...

Get Essay
The Shoe-Horn Sonata

“This is a fear that is inexpressible, incomprehensible to those who have never experienced it, a dread that strikes at the root of one’s survival – an existential fear. ” Experiences suffered by women and children in WWII Japanese POW camps are reflected in John Misto’s play, The Shoe-Horn Sonata. This is shown through a...

The Comic Scenes in Doctor Faustus

In any tragic or serious play, the dramatist tries to give relief to the audience by introducing comic scenes or episodes. The literary term for such comic interludes is known as tragic relief. A tragedy is bound to create tension in the mind of the audience and if this tension is not relaxed from time...

The Seven Ages of Man” is a dramatic monologue in William Shakespeare’s play “As you Like it.” The monologue is addressed by Jacques who has a gloomy look on life. This poem reveals to the reader the seven stages that a man plays throughout his life. It starts from a baby puking and whining, and...