It's More Fun in the Philippines

Don't use plagiarized sources. Get your custom essay on
“ It’s More Fun in the Philippines ”
Get custom paper
NEW! smart matching with writer

There are already several tourists who proclaims that it is more fun here in the Philippines. Have you been wondering why? Well maybe you’re wondering why because you haven’t been here. Well, to answer all your questions, I will state some facts here in my paper about why is it More Fun in the Philippines. I sincerely hope that you’ll enjoy reading this and hopefully, i will be able to satisfy your curiosity.

First, There are so many beautiful places here in the Philippines like Luneta Park, Burnham Park, Puerto Prinsesa, Boracay, and etc. You will really enjoy viewing the scenery. I assure you that you will really appreciate everything that you will see here.

Second, Filipinos are known as cheerful people. We Filipinos love to smile and laugh.

Even though we are burdened by problems, you wouldn’t notice it for we always laugh like we don’t have a care in the world. We are also known as hospitable and friendly. Whether you’re a tourist or a fellow Filipino, we’ll surely welcome you warmly here in the Philippines.

Third, we Filipinos are also known for our delicacies. Personally, not being able to taste food here in the Philippines, would be like missing a big part in my life. You must be thinking that i’m exaggerating, but i assure you, once you taste our food here, you’ll regret everything you thought.

With that, I can conclude that It is More Fun in the Philippines.

This study aimed to document the production of the Department of Tourism’s (DOT) new international tourism campaign tagline “It’s more fun in the Philippines” and to explore the factors behind the Agency’s decision to tap the Social Media as its primary vehicle in promoting Philippine tourism through the new campaign slogan. The study likewise assessed the effectiveness of the new media strategy in reaching its target market – foreign tourists. Open-ended interview guides were used in securing information from DOT and the Ad Firm responsible for the development of the new tourism campaign. A one-page structured-survey questionnaire was used particularly in generating feedback from foreign tourists on their awareness and perception of the new tourism promotion tagline “It’s more fun in the Philippines.”

A narration of the circumstances and process in the production of the new tourism campaign was made, together with an enumeration of the primary reasons behind the choice of the social media as the platform and channel in waging the new tourism campaign. The survey results showed that the Internet ranks Number 1 as a source of information on general matters and is a close second to friends, relatives and co-workers as the source of information that influenced the decision of foreign tourists to come to the Philippines. Quizzed and presented the current and the four other past tourism campaign taglines to determine their awareness of the present campaign, 47% of the foreign respondents accurately identified “It’s more fun in the Philippines” as the current tagline. The respondents likewise rated the current tourism tagline as “highly acceptable” on its appeal, capacity to attract interest, reasonableness, realism, recall facility, and its capacity to be understood.

Finally, the use of the Internet social media as the launching pad and channel for the campaign may be considered effective on the grounds that about 50% of the foreign respondents were aware of the new campaign slogan, and that 33% got their information from the Internet. The reach of the campaign in a very short period was already very encouraging. It is recommended that the DOT extend or make its own survey if only to determine the number of foreign tourists who are attracted to come to the Philippines on account of the new tourism tagline “It’s more fun in the Philippines.” There is also a need to customize a language translation service in the DOT website to make the campaign more virally far reaching.

Scope and Limitations of the Study

DOT launched again a new slogan. A line that would be easily understood. “It’s More Fun in the Philippines” is the same as “It’s More Fun in Switzerland”. According to Rome (2012) in her article in The Inquirer, the new tourism slogan of the Philippines is gaining more positive reactions from Filipinos since January when the slogan was released. The Department of Tourism said it spent P63 Million to buy good exposure for the campaign’s television advertisement on CNN, that has been aired in Asia, Europe and the United States. “It’s More Fun in the Philippines” has also launched at the International Travel Bourse in Berlin, which was attended by thousands of travel buyers.

The campaign had already made a long way from its social media success where different versions of the slogan were posted in the internet. There are some airplanes that promote the “It’s More Fun in the Philippines” campaign by painting the said slogan on the exterior of the plane. Half-Filipino American Idol Season II runner-up Jessica Sanchez is now the newest model of the poster of the Department of Tourism’s vast campaign. According to Department of Tourism (2012), since the campaign of “It’s More Fun in the Philippines” was launched in January, the Department of Tourism stayed positive because of the effects that the slogan gave.

According to Secretary Jimenez, There are currently policy reforms to facilitate the entry of the foreign tourists, infrastructure developments to improve the travel areas within the country, investments for expanding and improving the transportation, recreation facilities and accommodations that will help the Department of Tourism meet the year-end target. According to IPSOS Philippines, the slogan is “communicating its intended messaging that is making each Filipino proud and tell how beautiful the Philippines is, making people want to travel more and visit different tourist spots around the country, and making people believe and see that it is truly more fun in the Philippines.

Visitor arrivals to the Philippines stroked the target of an all-time high of 1,148,072 during the first three months of the year, posting an increase of 16.03 percent compared to last year’s arrivals of 989,501 for the same period. Deputy presidential spokesperson Abigail Valte said the Department of Tourism (DOT) undersecretary Ramon Jimenez Jr. has announced the good news that 2.14 million foreign travellers visited the country from January to June this year. The figure was 11.68 percent higher compared to the same period in 2011. The local tourism industry targets 4.6 million tourists by the end of the year.

It's More Fun in the Philippines. (2016, Sep 11). Retrieved from https://studymoose.com/its-more-fun-in-the-philippines-essay 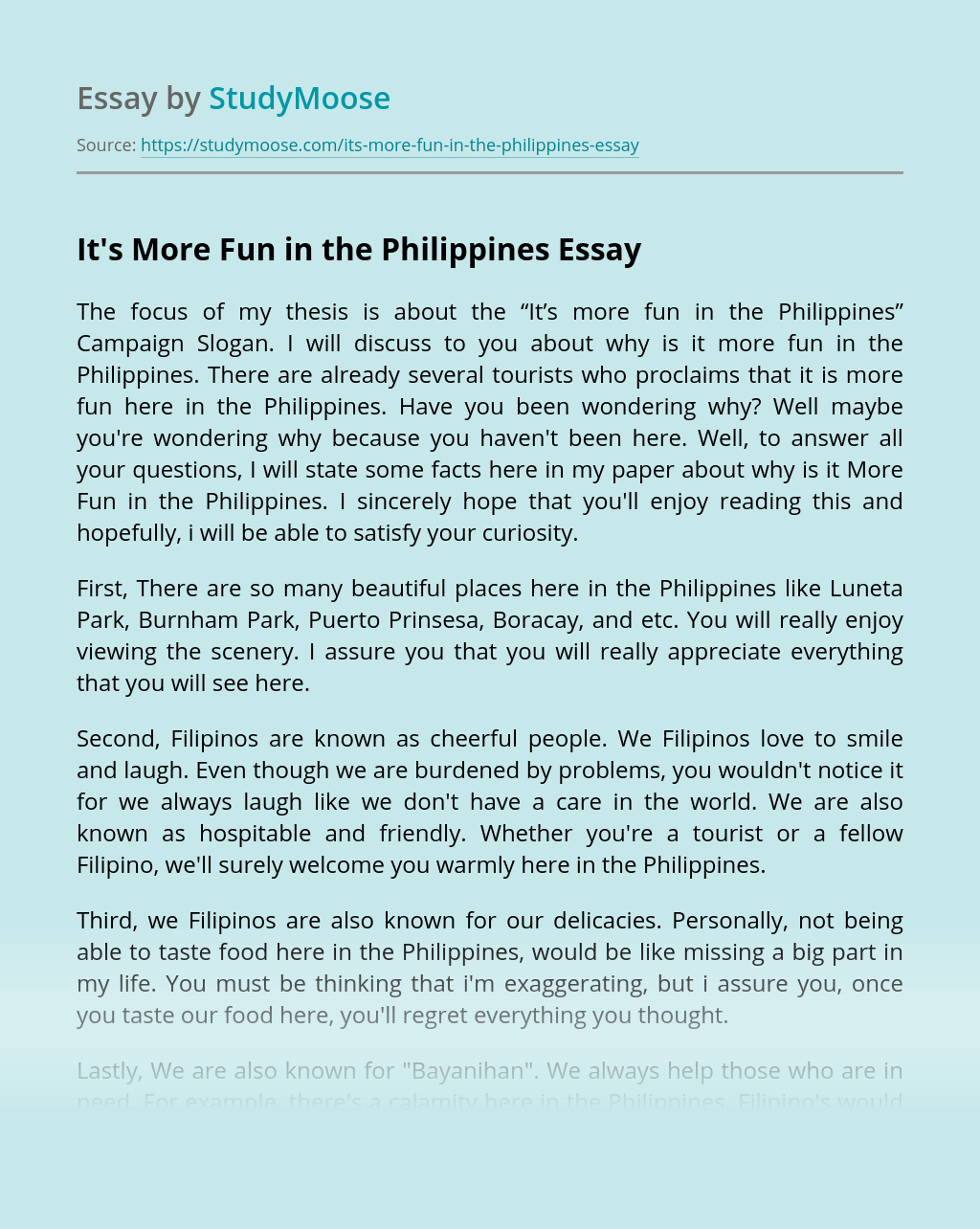