brinded
brindled, or having grey or black streaks against a tan or light-colored background.
hedge-pig
hedgehog
Harpier
an attendant spirit like Graymalkin and Paddock in Act I, Scene I
Swelt’red . . . got
venom sweated out while sleeping
Fillet
slice
fenny
from a swamp
blind-worm’s
legless lizard’s
howlet’s
owl’s
Witch mummy
mummified flesh of a witch
ravined
ravenous
Which phrase best describes the impression we get of Macduff’s son before he is murdered? Explain your choice, citing details from The Tragedy of Macbeth, Act IV, to support your answer.

Don't use plagiarized sources.
Get Your Custom Essay on Drama: Act IV- Macbeth Just from $13,9/Page

Get custom paper
a, Explanation: Only this answer reflects the whimsical remarks of the boy (“as birds do, mother”) and obvious affection he has for his mother. Choices b, c, and d are not supported by the text, their negative qualities quite contrary to the impression the son gives.
What do you predict about the apparitions’ last two predictions in The Tragedy of Macbeth, Act IV? Do you think the seeming impossibility of their happening means that Macbeth is safe, as he believes? Or do you think there will be a way for what seems impossible to happen? Explain your answers in a paragraph or two that speculates about what might occur later.

Base your speculations on what has happened so far. 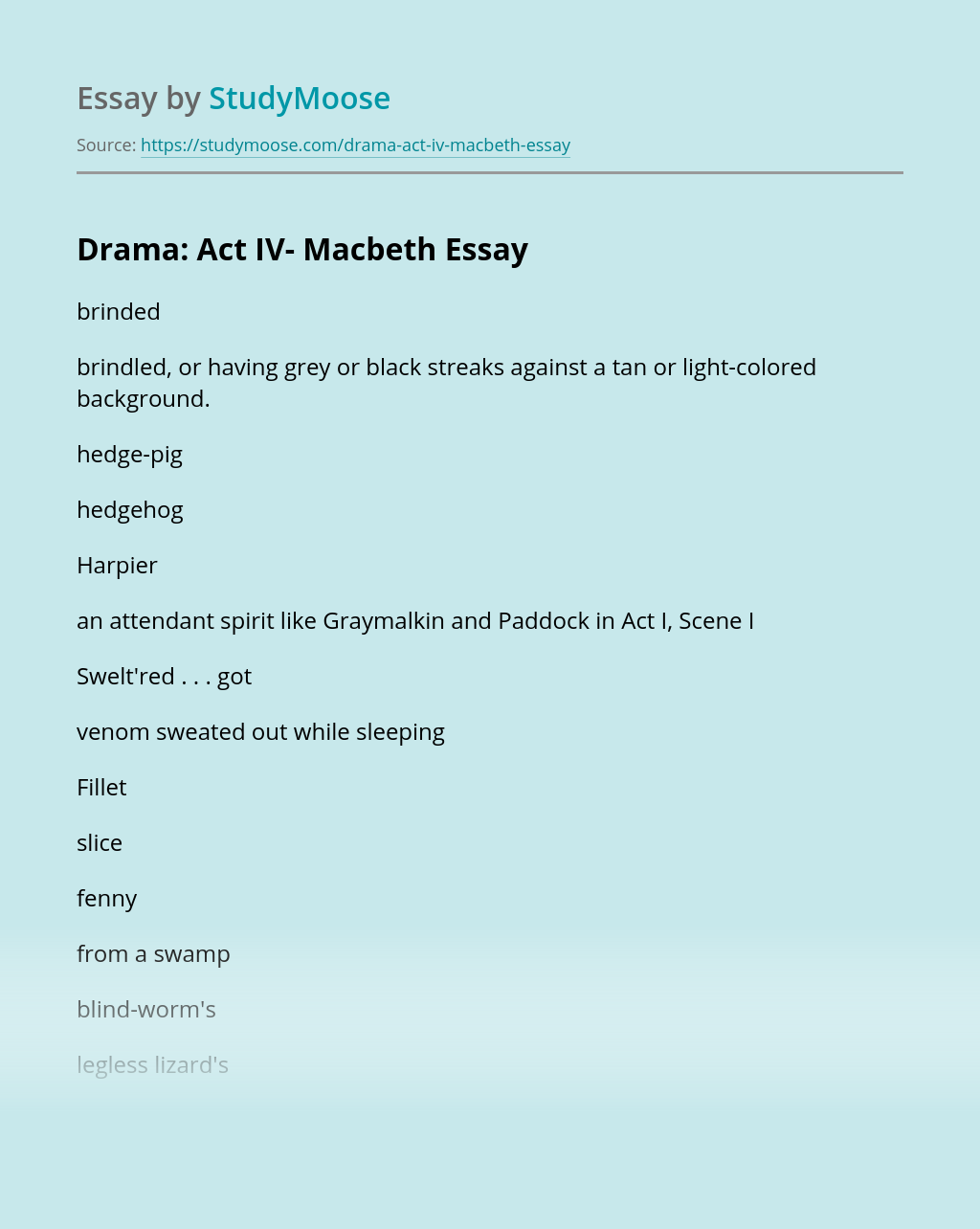 In Dead man’s path, there is a new headmaster who is educated and over ambitious and wants to turn his under-achieving school into a modern, top quality institution. He says “everything shall be just modern and delightful”. There is an old path that the villagers use to communicate to spirits and for babies to enter...

There are many themes in “Macbeth”, not surprising given the play’s richness of character, language and events. These themes include goodness and evil, deceptive appearances and reality and the supernatural. They are all linked to the idea of “fair is foul”, as are the characters. I will now try to examine in more detail the...

Get Essay
Why is Banquo such an important character in Shakespeares play Macbeth?

Banquo serves as a dramatic foil to highlight the character of the title role of Macbeth. There are superficial similarities between the two characters, but, beneath the surface, there is significant contrast between them. The use of contrast as a dramatic device is an effective way to focus the audience’s attention on the aspects of...

a. Comedy? When we talk about comedy, we usually refer to plays that are light in tone, and that typically have happy endings. The intent of a comedic play is to make the audience laugh. In modern theater, there are many different styles of comedy, ranging from realistic stories, where the humor is derived from...

The play ‘Hamlet’ was composed in tempestuous times for England. There was death caused by ‘The Plague’ and hardship was widespread. Much value surrounded the outward support of the monarch, Elizabeth. Throughout her reign, religion caused divisions and factions of the Protestant church thought about the theatre as sinful, amoral perhaps. In his plays, Shakespeare...