“How does Shakespeare present Macbeth as a disturbed character in Act 1 of Macbeth?”

“How does Shakespeare present Macbeth as a disturbed character in Act 1 of Macbeth?” William Shakespeare wrote the play “Macbeth” in 1606. It, as the title suggests, follows the story of a Scotsman named Macbeth and how, after the prophecy of three witches, sees his status evolve from a general in the Kings army to becoming the King himself.

However the main theme that Shakespeare introduces in this play is the lengths man will go to fulfil ambition and the treacherous consequences that come with it.

Don't use plagiarized sources. Get your custom essay on
“ “How does Shakespeare present Macbeth as a disturbed character in Act 1 of Macbeth?” ”
Get custom paper
NEW! smart matching with writer

Not only do we see Macbeth’s status evolve but also his personality within. With each scene we see Macbeth succumb to the pressures of achieving power and how this affects his character as well. Act 1 of “Macbeth” truly, from the beginning, shows us a clear development of Macbeth’s disturbed personality not only through language but the context behind this tragedy. In Act 1 Scene 2 we are not introduced to Macbeth, but not directly. Shakespeare describes him as a ruthless, violent but brave soldier through the mouths of admirers.

When the Thane Ross and a Captain describe Macbeth’s “brave” performance during a victory over Norway, we are immediately acquainted to the respect that he is held in. The Captain describes him in a very positive manner, “For brave Macbeth – well he deserves that name” is a quote that clearly emphasises the admiration that fellow soldiers have for Macbeth. The use of the word “deserves” shows us that he has earned the right to be commended. However another interpretation of Macbeth’s heroics is possibly his ruthlessness.

During his distinguishing, Macbeth is also described as quite a violent person. His fierceness is made apparent when the Captain conveys a very vivid explanation of how Macbeth killed a Norwegian, “Till he unseam’d him from the nave to the chaps”.

This description is very daunting to think about and Shakespeare leaves this image implanted in the heads of the audience. The use of the word “unseam’d” shows us Macbeth’s ruthlessness when in battle, with possibly no respect for other’s lives. The violent aspect of Macbeth’s character can be interpreted a disturbed one. His ruthlessness is quite inhumane in the sense that he shows signs of a villainous character.

Another way in which Macbeth is seen a disturbed character, is his association and connection with the three witches. When Macbeth and Banquo are introduced in Scene 3, Macbeth’s first line is “So foul and fair a day I have not seen”. This quote echoes the witches’ in Scene 1, “Fair is foul and foul is fair”. The phrase is almost a paradox, it can interpreted to show how nothing is as it seems. However the fact that Macbeth repeated a phrase said by witches all but adds to a negative insight into his character. During Shakespeare’s time, witches were seen as very real creatures. In the early 17th century, suspected witches were burnt and there was even an Act of Parliament put forward in 1604 against them.

This was because witches were subjects of morbid and fevered fascination by society at this time; people feared them. They were seen as creatures of Satan and therefore evil characters. The use of the three witches in the play adds to the fear within it and with this, the use of Macbeth echoing their words adds to the sheer disturbance. During this time, Macbeth’s reference to “foul and fair” would have caused a negative impact on the way the audience looked at him. To be associated with repelled evil witches creates a dark atmosphere and tone throughout the play. After the witches’ prophecy, Macbeth’s mind is beginning to turn into a state of madness and paranoia due his constant change in thoughts.

The ideas that roam Macbeth’s head prove to be a substantial part of the Act. The prophecy, which promises the status of King in the future, has been fixed into Macbeth’s mind, provoking ill thoughts. After bearing witness to the supernatural occurrence, Macbeth begins to contemplate the idea of kill the present King Duncan in order to become King.

“This supernatural soliciting/Cannot be ill, cannot be good” is a quote that clearly shows us the mindset that Macbeth is in confusion. The use of the words “ill” and “good” makes it clear that he is between the two thoughts and his mind isn’t thinking straight however he comes to a conclusion that he shouldn’t intervene to make the prophecy become true. However Macbeth again contemplates the idea later on in Scene 4. After realising that Malcolm, Duncan’s Son, is the rightful heir to the throne, Macbeth is again mystified to whether he should intervene in fate. “The eye wink at the hand; yet let that be/Which the eye fears, when it is done, to see” illustrates his desire for power but reluctance to commit murder, “the eye fears”.

The theme of hesitation and constant contemplation of Macbeth is a sign of confusion within his mind. This is a sign of a disturbed character. Another way in which Macbeth can be seen in a negative way is through his motives and if they are with foundation especially through eyes of the audience who witnessed “Macbeth” in William Shakespeare’s time. This includes the idea of treason and how power was a God given right. In Scene 7 we find that Macbeth is considering whether killing Duncan is the right act to commit due to the high respect that the King holds him in. When talking in his soliloquy (something that Shakespeare uses to shows the audience the thoughts and true feelings of characters) Macbeth talks about his respect for Duncan, “I am his kinsman and his subject”, this supports the fact that he is also related to Duncan and a trusted figure. However his mindset is yet again changed as he finally decides that murder is the best option, “False face must hide what the false heart doth know” is a signal of his change of mind but, with that, his personality.

The idea of Macbeth committing murder on a King would have been frowned upon when the audience of the 17th century watched “Macbeth”. Political connotations such as the Gunpowder Plot 0f 1605 was possibly used by Shakespeare to relate to Macbeth and the idea of killing Kings. “Macbeth” was possibly used as a caution against potential regicides, especially with the patron of Shakespeare’s productions being the King James. Also religious connotations, such as the idea that the status of King was a God given right, played a significant part. Macbeth is aspiring to achieve a status that isn’t a God given thing, especially at this time the theme of treason was heavily frowned upon. The idea of Macbeth wanting to achieve Kingship without God given rights would have added to his disturbing character. There are other examples that show Macbeth’s disturbed character.

One other factor could be his irrational thinking and the way that Lady Macbeth must always intervene to make him think right. Near the end of Scene 7, Macbeth tell his wife that he will not commit the murder, “We will proceed no further in this business”, is a firm claim from Macbeth. His tone is one that is very decisive however after the persuasive techniques of Lady Macbeth he quickly changes his mind. “I am settled, and bend up/ each corporal agent to this terrible feat” is said at the end of the scene, showing Macbeth’s sudden change in mind and sheer willingness to kill King Duncan. Macbeth doesn’t think straight and can be seen as having a fragile mind, one that can be easily moulded.

Overall, Shakespeare successfully shows the audience how Macbeth develops his disturbed character. By using language features and also the views of certain themes of the audience of the time, he introduces a very irrational character. These themes include violence, religion, politics and the idea that man’s desire for power outweighs any respect for the consequences. Macbeth slowly develops from a violent person to someone who is very fragile in the mind and also, essentially, a disturbed character.

“How does Shakespeare present Macbeth as a disturbed character in Act 1 of Macbeth?”. (2016, Apr 20). Retrieved from http://studymoose.com/how-does-shakespeare-present-macbeth-as-a-disturbed-character-in-act-1-of-macbeth-essay 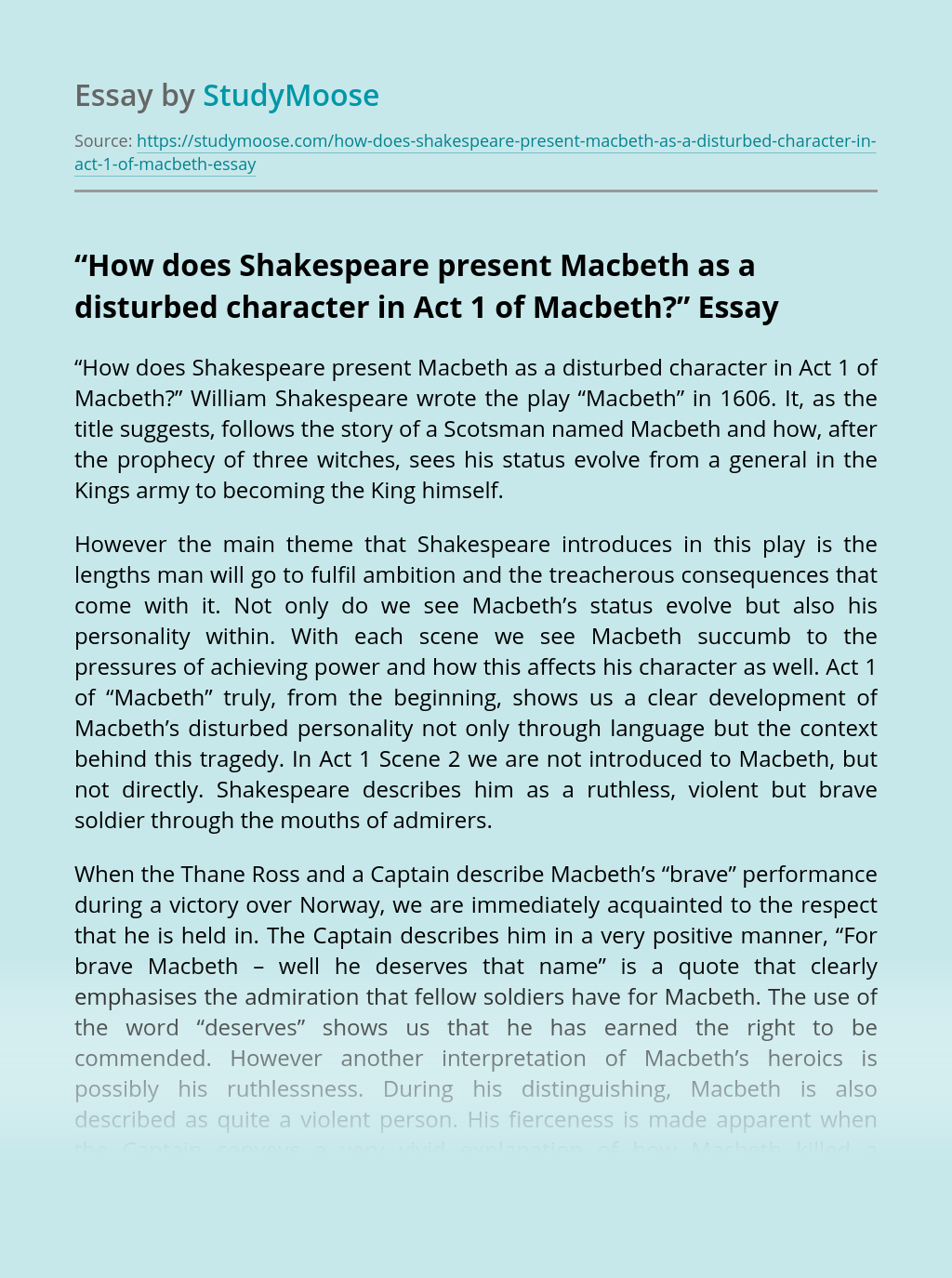