2. Explain the differences between terrorism, state terrorism, and state-sponsored terrorism.

From Merriam Webster:
Terror- a state of intense fear; a cause of anxiety. Violent or destructive acts committed by groups in order to intimidate a population or Government into granting their demands. Terrorism- the systematic use of terror especially as a means of coercion. From Terrorism Today (The Past, the Players, the Future)

The Homeland Security Act of 2002 defines terrorism as “ any activity that involves an act that is dangerous to human life or potentially destructive of critical infrastructure or key resources; and is a violation of the criminal laws of the United States or any State or other subdivision of the United States and appears to be intended to intimidate or coerce a civilian population; to influence the policy of a government by intimidation or to affect the conduct of a government by mass destruction, assassination, or kidnapping.

Don't use plagiarized sources. Get your custom essay on
“ Terrorism Essay ”
Get custom paper
NEW! smart matching with writer

State- a politically organized body of people usually occupying a definite territory; especially: one that is sovereign.

A government or politically organized society having a particular character. Sponsor- one who assumes responsibility for some other person or thing. A person or an organization that pays for or plans and carries out a project or activity. The difference between terrorism, state terrorism, and state-sponsored terrorism comes down to the persons involved in the act being committed. Much of the terrorism we see today on the news or in the papers are acts committed by terrorist groups linked by ideology and financed through the drug trade as well as ransom obtained from kidnappings.

Course#: BCJ303
Unit 1
Many of the recent acts committed by this type of terrorist have been based on ideology and were carried out against civilian personnel. One of the most recent examples is the Boston Marathon attack, the two who carried out the attack had grown up in the United States and led seemingly “American” lives but had latched onto an ideology that views the United States as an enemy of Islam and that the targeting of innocent civilians is a legitimate tactic. Terrorism in the examples given is carried out by small disconnected groups that are mostly aligned by ideology. Although these groups are not supported by a larger organization or national government many governments with a similar ideology or nation with a large population of person who share a similar mind set to the terror group will many times fail to denounce the acts. This is where terrorism differs from state terrorism and state-sponsored terrorism as both of those types of terrorism are directly supported by the state. State terrorism is used by a nation state as way to control its citizenry and suppress any dissenting views or beliefs that are contrary to those of the government.

Many of the governments that exercise this form of terror will sometimes start the process of suppression by creating new laws designed to protect the governing class and criminalize the opposition groups and others have completely thrown out their nations laws and implemented new laws based on strict adherence to a religious ideology or total government control in all aspects of the citizens lives. This was the case recently in Egypt, the elected government (Muslim Brotherhood) removed all secular and Christian officials from the government and in their place were seated members of the Muslim Brotherhood. Many of the top military leaders were also replaced with Brotherhood members. These changes and the removal of any opposition party led to many pro government groups to further oppress the ‘non-believers” through the shutting down of businesses to the burning down of churches and the killings of Christian and secular citizens. Another tactic that has been used in Africa and Latin America by state terror regimes is the use of the police and or military as death squads. These squads are dispatched to eliminate anyone seen as opposition or supportive of the opposition.

Course#: BCJ303
Unit 1
Many of the state-sponsored terror organizations have a set area of operation not far from their sponsor state but this has changed recently as Hezbollah has been taking up shop in Latin America working alongside cartel and narco-terror groups. While all three types of terrorism are used to instill fear and bring about a change that is desired by the organization or state, the main difference between the three is the support (financing, training, political backing) that the group receives. 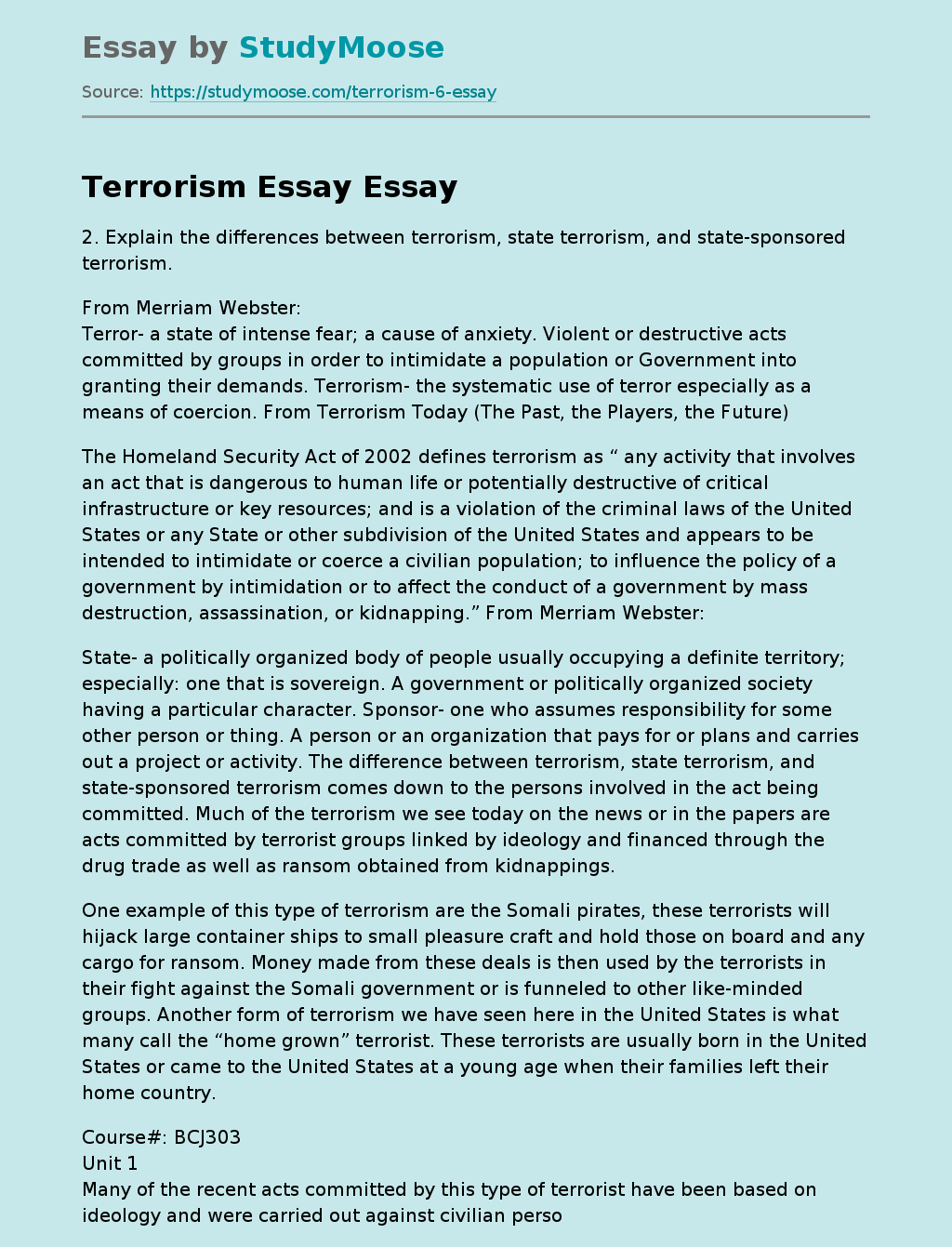