The reason topic being chosen is to better elucidate the different forms of resistance and how effective it was in the Caribbean.

Turn in your highest-quality paper
Get a qualified writer to help you with
“ History SBA ”
Get high-quality paper
NEW! AI matching with writer

As for a historian, this topic allowed me to open my mind by analyzing the types of resistance and interpreting it in the SBA. Resistance of slaves was a great part of Caribbean history which is currently still the most debated topic. With that being said, I felt a need to choose this topic.

Resistance of slaves was a great part of Caribbean history. There were two types of resistance practiced by slaves: passive (day by day) and active resistance.

In this research paper I will show different types of resistance and their level of effectiveness in battling slavery.

FORMS OF RESISTANCE & ITS EFFECTIVENESS

The most common form of resistance available to slaves was what is known as “day-to-day” resistance, or small acts of rebellion, most popularly known as passive resistance. This form of resistance included sabotage, such as breaking tools or setting fire to buildings. Striking out at a slave owner’s property was a way to strike at the man himself, albeit indirectly.

Other methods of day-to-day resistance were feigning illness, playing dumb, or slowing down work. Both men and women faked being ill to gain relief from their harsh working conditions. Women may have been able to feign illness more easily–they were expected to provide their owners with children, and at least some owners would have wanted to protect the childbearing capacity of their female slaves. Slaves could also play on their masters’ and mistresses’ prejudices by seeming to not understand instructions. When possible, slaves could also decrease their pace of work.

Women more often worked in the household and could sometimes use their position to undermine their masters. Poisoning the master was very popular .In general women may have used birth control or abortion to keep potential children out of slavery. Many slave owners were convinced that female slaves had ways of preventing pregnancy. Throughout the history of Caribbean slavery, Africans resisted whenever possible. The odds against slaves succeeding at a rebellion or in escaping permanently were so overwhelming that most slaves resisted the only way they could, which was through individual actions. Slaves also resisted the system of slavery through the formation of a distinctive culture and through their religious beliefs, which kept hope alive in the face of such severe persecution. The other form of resistance was active resistance, which consisted of running away and conducting rebellions. Slaves who ran away most often did so for a short period of time.

These runaway slaves might hide in a nearby forest or visit a relative or spouse on another plantation. They did so to escape a harsh punishment that had been threatened, to obtain relief from a heavy workload, or just to escape the drudgery of everyday life under slavery. Others were able to run away and escape slavery permanently. Running away was difficult; slaves had to leave behind family members and risk harsh punishment or even death if caught. Many of the successful runaways were only successful after multiple attempts. Runaway slaves would often choose holidays or days off to give them extra lead time (before being missed in the fields or at work). Many fled on foot, coming up with ways to throw off dogs in pursuit, such as taking to water or using pepper to disguise their scent.

Slave rebellions all over the Caribbean region were common. There is documented evidence of uprisings in at least 20 islands. In many of the territories multiple revolts occurred. Furthermore, there are many cases when conspiracies were put down before there was any violence. The slaughter of the native population by the early 18th Century left the colonist landowners without a work force for the great sugar, coffee, cocoa and cotton plantations that formed the backbone of the region’s economy. African slaves were brought in to work the land. By the 1720s the population of the Caribbean ranged from a low of about 30 % in Cuba to more than 90 % in other islands. Most whites, however, lived in cities; in the countryside the racial makeup favored Blacks 50 to 1. None-the-less, all economic, political and social power was in the hands of the Europeans.

There is no need to discuss the many evils of slavery suffice it to say that revolts began before long. Initial revolts took place in Hispaniola and Puerto Rico in the late 16th Century and, Barbados, Jamaica and Antigua early in the 17th. By the middle of the 18th Century, Antigua, Guadeloupe, Sainte Domingue (Haiti), and Dominica had experience various degrees of violence. Newly brought slaves – those that had been free in Africa – were more likely to revolt than the ones born in captivity. In some islands, rebellion was instigated by opposition colonial powers during European wars; an uprising in a Spanish colony could be prompted by French agents; or British agents could bring about a rebellion in a French colony and so forth.

The Berbice Slave Uprising was a slave revolt in Guyana that began on 23 February 176and lasted into 1764. It is seen as a major event in Guyana’s anti-colonial struggles, and when Guyana became a republic in 1970 the state declared 23 February as a day to commemorate the start of the Berbice slave revolt. In 1762, the population of the Dutch colony of Berbice included 3,833 enslaved Blacks, 244 enslaved Amerindians or indigenous people, and 346 whites. On 23 February 1763, slaves on Plantation Magdalenenberg on the Canje River in Berbice[ rebelled, protesting harsh and inhumane treatment. They torched the plantation house, and then went to other plantations to mobilize other enslaved Africans to join the rebellion. Cuffy, a house slave at Lilienburg, another plantation on Canje, is said to have organized them into a military unit.

As plantation after plantation fell to the slaves, the Dutch settlers fled northward and the rebels began to take over control of the region. For almost a year, the rebels held on to southern Berbice, while the whites were able to hold on to the north. Eventually only about half of the white population that had lived in the colony remained. The rebels came to number about 3,000 and threatened European control over the Guianas. Other key figures among the rebels include Atta, Accara and Accabre. The insurgents were eventually defeated in the spring of 1764 with the assistance of troops from neighbouring French and British colonies and from Europe.

Cuba with seven documented significant insurrections in the 19th Century is second to Jamaica, which had 14 verified slave rebellions from the mid 18th Century to the mid 19th. The greatest slave revolution in Jamaica was the Baptist War of 1831-1832. It began simply as a general strike during the Christmas season. The slaves, led by one Samuel Sharp, wanted liberation and decent paid. It is not clear why it turned into a fully fledged revolt, but the landowners considered so from the beginning. About 14 Europeans were killed and thousands of acres of crops burned. Within 10 days, it was put down. Anywhere from 20,000 to 60,000 slaves participated in the uprising. Between 200 and 400 die in the fighting and similar numbers were later hunted down. Sharp was executed by hanging. Promises of freedom for the slaves which put an end to the fighting were not kept. British forces landed in the island and hung close to 3,500 slaves. Many additional Africans received other kinds of punishment. The revolt known for its connection to a couple of Baptist parishes was over.

The most successful slave revolt to take place in the Caribbean Basin was the Haitian Revolution of 1791 to 1804. The uprising by the slave population in the western part of Hispaniola was influenced by the ideals of the Enlightenment and French Revolution – which had been launched just two years before. The leader of the revolt was Toussaint L’Ouverture. The whole process of liberation involves a complex combination of the slave’s revolts; European politics which resulted in the slaves allying themselves first with the Spanish and British and later, with the French; and total control of the island. Eventually, the government of Napoleon Bonaparte would send troops to re-conquer Saint Domingue and would send L’Ouverture in chains to France, where the Haitian leader would die in 1803. However, L’Ouverture’s second in command, Jean-Jacques Dessalines, would declare Haiti a sovereign nation the following year. Haiti thus joined the United States as the only former American territories to gain independence before the 19th Century and the first former European colony liberated by slaves. 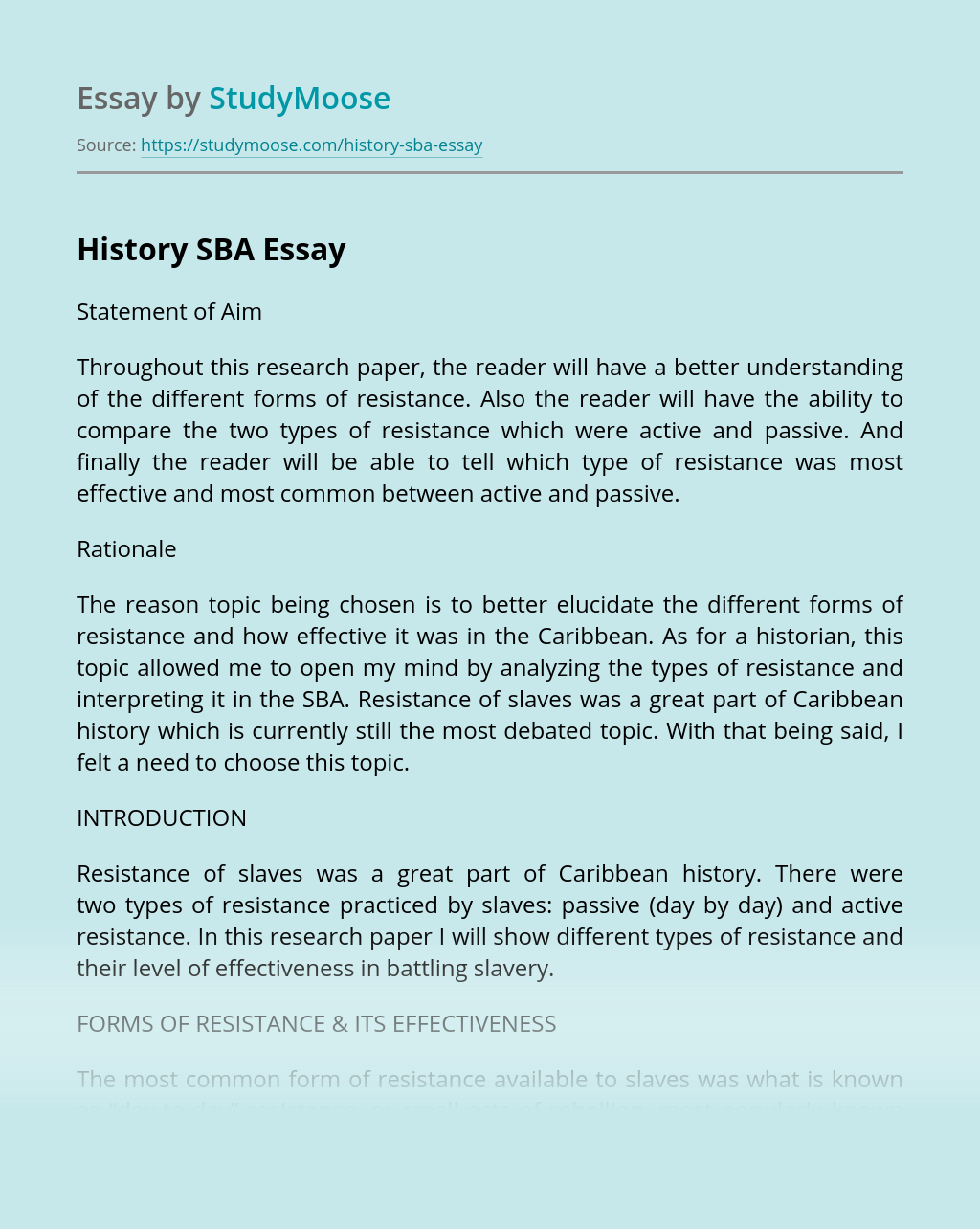 Turn in your highest-quality paper
Get a qualified writer to help you with
“ History SBA ”
Get high-quality paper
Helping students since 2015
Stay Safe, Stay Original