How Does Bill Bryson Use Humour to Entertain His Reader?

How does Bill Bryson use humour to entertain his reader? ‘Notes from a Small Island’, written by Bill Bryson is a reflective travel journal comparing Bryon’s past views and opinions of Britain, his expectations and thus the reality of what he discovers it to have become. Bryson uses satire, humour, irony and sarcasm to generate a pace and lucid flow within his writing, and for the reader this can be thoroughly captivating and entertaining. Immediately as the book opens, Bryson establishes an informal and incredibly comic register.

Don't use plagiarized sources. Get your custom essay on
“ How Does Bill Bryson Use Humour to Entertain His Reader? ”
Get custom paper
NEW! smart matching with writer

We are readily exposed to his frequent use of each cities’ semantic field, colloquialisms and his unique writing style, which hence make the classification of this book as a travel journal, questionable yet interesting. The use of the first person narrator throughout the book; and especially when making several humorous interjections; create a medium via which the reader is able to communicate with Bryson and feel a part of the text as a whole.

The chatty style and atmosphere the narrator creates sets the scene and again makes the reader feel as if they and Bryson are well acquainted.

His use of well-structured language variants forge a legitimate relationship between himself and his audience and fabricate an undoubtedly entertaining read. Bill Bryson unmistakeably redefines the genre of travel writing by defying the stereotypical travel journal. The accounts of his travels, challenge the primary purpose of travel writing, bringing to light the areas in Britain one wouldn’t like to visit as opposed to highlighting and accentuating the beauties The UK has to offer .

The use of wit and humour within Bryson’s text is very prominent. I took a train to Liverpool, they were having a festival of litter when I arrived’ The sarcasm and irony within this comment, is both sharp and interesting , referring to the accumulation of rubbish as a festival, of course meaning a festival in terms of grand lavish style with many in attendance, possibly indicating masses of rubbish as far as the eye could see, the use of the word ‘festival’ in itself also connotes a sense of happiness and celebration, possibly suggesting the people amidst the rubbish are making no efforts or attempts to clean it and were happy with their surroundings.

Bryson’s clear dis-approval of this is evident in his choice of words, his disdain resides within the words ‘they were having a festival of litter’ almost as If to say his warm welcome involved being enveloped into the overwhelming piles of refuse. Which would evoke both laughter and thought, engaging and entertaining the reader.

Such a long winded title also reflects the extravagance and high esteem in which such realistic characters are held, when they are in effect nothing but the name they bear. This use of humour would resonate amongst his readers whom share the same view. Having had high prior hopes for his visit to Britain, Bryson appeared less than impressed. The use of the word lather connotes the forming of lather using soap and water, lather is thick and cloudy and thus this metaphorically makes his indecisiveness worse.

This has achieved its purpose of entertaining as it’s one of those humorous moments when the reader has to think about the comment before ‘getting it’ and then appreciating the humorous element. This is highly entertaining also, as the reader will wish to read on to further develop their relationship with Bryson and uncover his humorous antics. Bryson’s last visit to the UK was in 1973, and he remembers almost everything his last trip comprised of. Therefore, his expectations of the Britain he came to see were severely shattered, when he realised that it had hardly changed at all. When we at last began to accumulate children, it turned out they didn’t like these books at all because the characters in them never did anything more lively than visit a pet shop or watch a fisherman paint his boat. I tried to explain how this was sound preparation for life in Britain’ This statement is highly ironic, as we see Bryson, as someone desiring nothing more than to return to the British Iles, his excitement at Dover and his constant reminiscing throughout the course of the book all prove so.

This shows that however, upon arrival, Bryson was exceptionally underwhelmed by his use of irony to create humour. The use of the word ‘accumulate’ suggests the gathering of children, as opposed to the creating and bringing them up. As if children were objects or just popped out of nowhere and were collected as items; this is quite a funny way of seeing it, and as a reader we sympathise with Bryson when trying to realistically explain the dull and boring extent of British life.

This is also reflected in his further choice of words, ‘they didn’t like these books at all because the characters in them never did anything more lively than visit a pet shop or watch a fisherman paint his boat,’ Children are renowned for finding for finding or making fun out of anything, and the way that children are rarely bored therefore shows that for the tedious content of these books to bore such children, when reflecting British life gives no hope for the land and thus indicates there were little or no things to provide amusement.

Aside from the heavy factual basis of this book, for the reader the humorous elements provide a chatty and upbeat balance to the otherwise non-fiction account of Bryson’s trip to Britain. They successfully achieve their aim of entertaining the audience, as humour can be found at every corner that without a shadow of a doubt evoke laughter, or even thoughts that appraise Bryson’s witty writing style. His effective use of irony and contradiction of thoughts also evoke humour as he quite literally mocks himself on a frequent basis within the following extract and this is reflected throughout the course of the book. I mention this here because of all the little seaside places…. It was altogether a delightful spot’ This quotation encompasses Bryson’s memories of Lulworth cove, and as seen by the use of adjectives, it is a positive one. However, when Bryson hits reality, it’s a whole different story. His use of words such as ‘nice’ ‘delightful’ ‘happy’ ‘colourful’ ‘intensely pretty’ connote the flawless and idealistic account he has of Lulworth as she last remembered it, however, when he comes to realise a regression in standard, there is a drastic change in the structure and use of words. Irony is also present at this moment and Bryson had xpressed his desire to return to Lulworth Cove for ‘years’ And to return to find it in the state everything but the state in which he left it both ridicules and mocks him. His realisation comes in the form of a new paragraph with an indented ‘So imagine my surprise’ The chatty nature of this quotation depicts a possible change in tone, also the words ‘imagine my surprise’ are sarcastic, as if one reads on he is less than surprised. This use of sarcasm is effective to communicate Bryson’s feelings of dismay and disappointment to the reader, and allow a picture to be created in the mind, of his memory and reality.

The use of adjectives significantly change from nicer, more subtle words to harsher descriptions; ‘forgotten’ ‘sticky’ ‘stale’ ‘slopped’ ‘fag’ . This use of adjectives is extremely effective in depicting a change in tone and opinion, he clearly does not see the Lulworth Cove as he used to, and he almost mocks himself for being so blind and expecting so much of the place. This is an example of satire and humour. This extract consists of lengthy sentences which express his opinions and allow him time to gauge and communicate his thoughts effectively.

The transition between the reminiscing and reality is also humorous, as, as Bryson quite literally mocks himself and his intelligence as do the readers. Bryson uses sarcastic intellect to communicate what he really feels, he states ‘ I was almost the only customer in the place’ Quite significantly disregarding any other person present in this ‘grubby’ place, obviously, there can never be ‘almost a person’ thus he is not referring to the possibility of other people there as people. Which can be considered humorous as he sees himself superior.

To conclude, I believe that Bryson successfully uses humour, and its further derivations to engage and entertain the readers. He frequently imparts his opinion and rarely writes continuous prose unlike many other travel journals. Bryson mocks the genre, almost turning his account into an ironic diary, whereby he has wanted to return to Britain for years however what he comes to find here is not as he remembers or expects. This general idea, highlights the effectiveness of satire and humour and successfully allows interaction between Bryson and his readers

How Does Bill Bryson Use Humour to Entertain His Reader?. (2020, Jun 02). Retrieved from https://studymoose.com/how-does-bill-bryson-use-humour-to-entertain-his-reader-new-essay 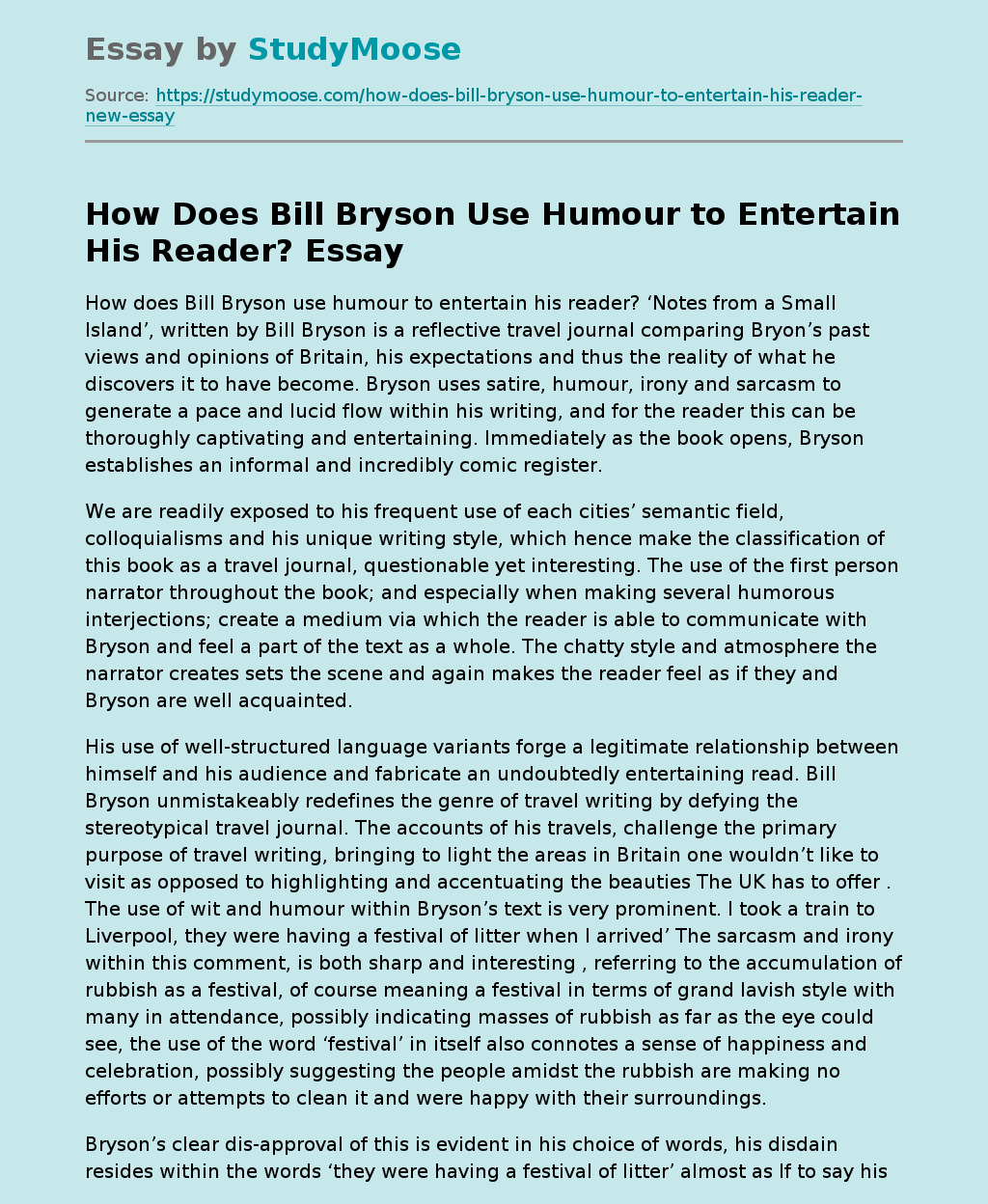