How Does the Poet Use Techniques to Engage the Reader?

Bruce Dawe is a famous poet born in 1930. He incorporated similar techniques in his poems ‘War Without End’ and ‘Description of an Idea’. In the ‘War Without End’ the war is metaphorical and represented as the never ending car crashes and accidents on our roads every year whereas in ‘Description of an Idea’ the war is represented as a historical past event that was associated with the 1989 massacre in Tiananmen Square. Each poem illustrates the similarities between a metaphorical and literal war via the use of repetition, historical references and ambiguity.

Don’t waste time
Get a verified writer to help you with How Does the Poet Use Techniques to Engage the Reader?
Hire verified writer
$35.80 for a 2-page paper

The use of repetitive phrases in the poem ‘War Without End’ is used to emphase the repetition of car accidents and crashes on our roads. For example ‘the war was not like any other war’, gives the reader the feeling as if excessive car accidents are metaphorically killing as many people as Genghis Khan did in his attempt to murder every enemy. Whereas in ‘Description of an Idea’ repetition is used to emphase the reader to feel as though the cause is important and should be recognised.

Dawe uses the repetition of words like ‘You can’ and ‘someone else will’ to intrigue the reader into feeling as though if they were to ‘nail it to a cross’ it would ‘rise again after 3 days’ this gives the reader the impression that what they decide to do will influence other people decisions. This technique helps to make the reader think of what they would do if they were in that situation or under those circumstances.

Whether it’s a massacre in Tiananmen Square or a mass murder throughout parts of China, Bruce Dawe uses historical references as a technique to highlight the importance of the events in each of his two poems.

The use of this technique in the poem ‘War Without End’ emphasises and applies the idea in to the reader’s minds that the accidental deaths on our roads is compared to an unruly mass murdering of potential threats, shown in the phrase, ‘he knew what he was doing, when we kill we can only say we do not understand…’. In the poem ‘Description of an Idea’ the use of historical events gives readers the impression that the students who were murdered in the massacre of Tiananmen Square did not die in vain; they did not die for a useless reason or cause.

For example the words ‘you can beat it to a bloody pulp… and it will still think of freedom’ and ‘someone somewhere will still die for it’ give the reader the impression that no matter what you do to someone they, whether they are close by or somewhere else in the world will not die in vain; as their idea will never die. Therefore in the poems the use of historical references gives the reader another aspect of ‘war’ to look at and clearly comprehend the extent of Dawe’s anti-war poems.

Having multiple meanings is used within the poems written by Bruce Dawe to create a sense of ambiguity and allow the reader to create their own understanding. In each of the two texts Dawe uses a variation of references and ambivalent phrases to help the diverse groups of readers to clearly comprehend his points about anti-war which are immersed within his poems. A sample of this is in the poem ‘Description of an Idea’ Dawe’s last line of the poem reads ‘and the billionth will reach for the dictionary…’ this could be interpreted as one person will look for an answer, or one person will disagree and question the answer.

The technique of ambiguity when used within a poem gives a variation of diverse people the opportunity to have an opinion or to simply interpret the line to mean something different. Additionally another example of ambiguity is found within the lines of the poem ‘War Without End’; within the text is the line ‘robbed of all sweetness under the sun’; this is ambiguous as it could be taken to mean that either the victims of our roads are robbed of either their youth or freedom, or that the families of the victims are stripped of their happiness; as they have the constant reminder that their loved one was killed on our roads.

Through the use of ambiguity the readers are captivated as they feel as though they are entitled to have an opinion and are able to interpret the poem to their own understandings. Through the use of repetition, historical references and ambiguity Bruce Dawe is able to express his negative feelings towards ‘war’. Within the two poems the use of repetition helps to show the reader how urgent and uncivil it is that people are dying not only in wars but on our roads yearly.

The use of historical references help to emphase the importance of each poem and give the reader a more clear understanding of the poem, as well as using ambiguity to intrigue a more diverse group of readers; as they have the opportunity to create their own definition of the poems. The use of these three techniques helps Dawe to engage the readers and allow them the opportunity to feel empathy for the situations expressed within the poems.

How Does the Poet Use Techniques to Engage the Reader?. (2016, Sep 15). Retrieved from http://studymoose.com/how-does-the-poet-use-techniques-to-engage-the-reader-essay 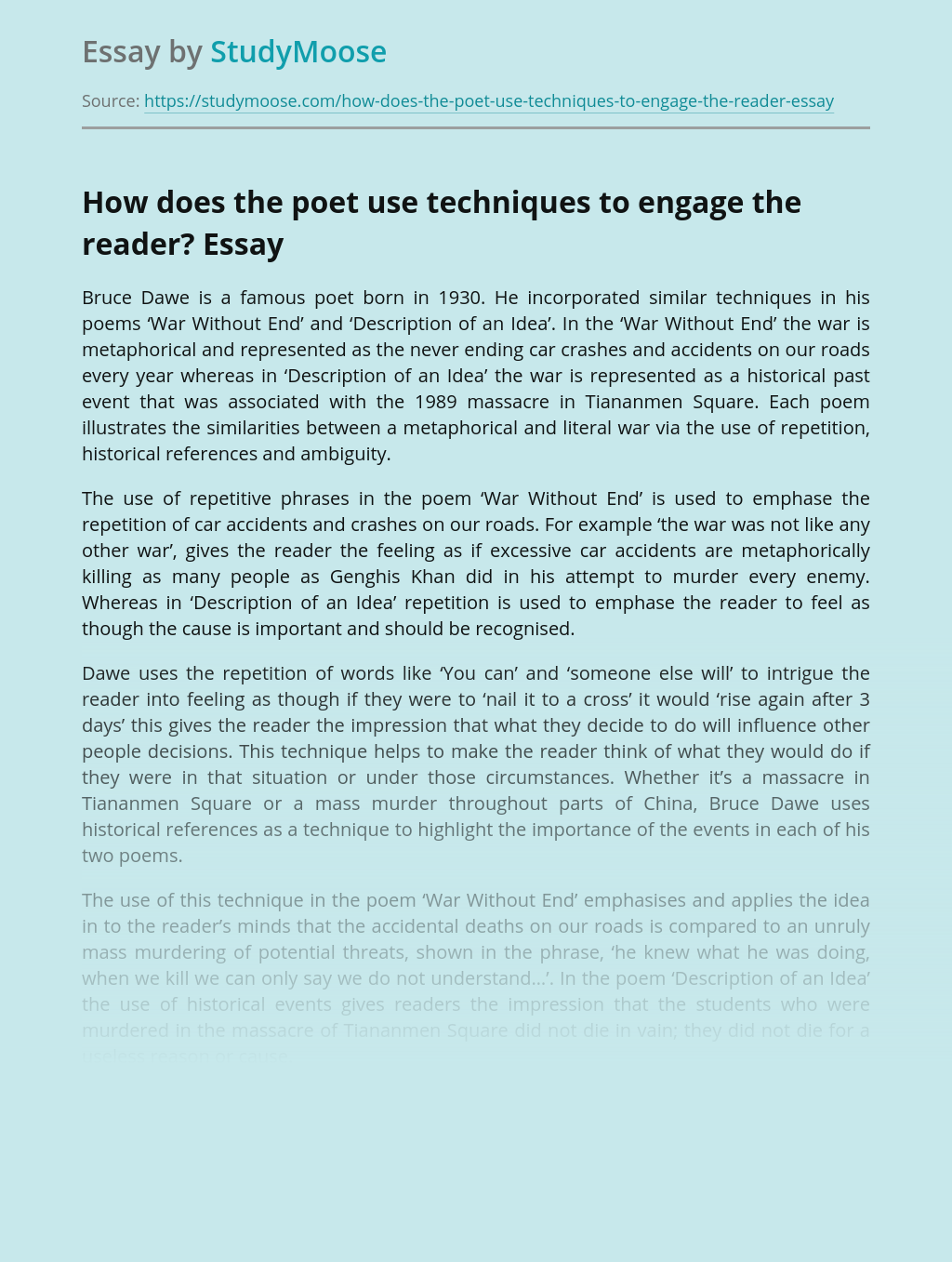 Don’t waste time
Get a verified writer to help you with How Does the Poet Use Techniques to Engage the Reader?
Hire verified writer
$35.80 for a 2-page paper
Stay Safe, Stay Original