How Does John Osborne use Humour at the Beginning of 'Look Back In Anger'?

John Osborne uses dark humour in ‘Look Back In Anger’ to suggest the changing moods in which the male protagonist, Jimmy, partakes during the play. The dark humour is almost disconcerting and off-putting. Osborne also reveals a satire feel through Jimmy and Cliff’s dialogue, as they seem to mock and make fun of their society, which they are apart of. “Who buys this damned thing? (throws is down) Haven’t you read the other posh paper yet?” In this quotation Jimmy mocks such the society in which he lives, when he says ‘who buys this damned thing?’ he must have bought it himself for it to be in his own possession, thus mocking himself.

Don't use plagiarized sources. Get your custom essay on
“ How Does John Osborne use Humour at the Beginning of ‘Look Back In Anger’? ”
Get custom paper
NEW! smart matching with writer

Jimmy comes across as a very stubborn personality in the play and doesn’t seem to like change, bit mocks his own life and does hint that he wants change, but is too cowardly to admit it. “God, how I hate Sundays! It’s always so depressing, always the same.

We never seem to get ant further, do we? Always the same ritual.” Jimmy almost mocks his own lifestyle and moans for change within it. But when the opportunity arises on behalf of change, he declines it, “And have my enjoyment ruined by the Sunday night yobs in the front row? No, thank you.” It is as if he is complaining about the routine of which his life undertakes, but is too comfortable in it to do anything about it. I find this amusing and humorous because Jimmy puts up a front that he is a tough, stubborn being, but he is too cowardly for change.

The dark humour used in the opening scene makes a form of humour that regards human suffering as absurd rather than pitiable, or that considers human existence as ironic and pointless but somehow comic. “She went forward to declare herself for love or whatever it is, and, in the rush of converts to get to the front, she broke four ribs and got kicked in the head.” This quotation by Jimmy, is said in a careless and gossipy kind of way, dark humour is used in this quotation in the way that Jimmy doesn’t care for the subject matter, the woman, but the conversation which could come out of it, he did not pity her for he didn’t know her.

There is a conflicted but humorous feel throughout the start of the play between Jimmy, as the male protagonist, Alison and Cliff. As we read on we find out that there is friction between Jimmy and Cliff which seems as if is created from boredom. In act1 scene 1 there is a humorous dialog spoken by Cliff about Jimmy, “You’re like a sexual maniac – only with you it’s food.” And “James Porter, aged twenty-five, was bound over last week after pleading guilty to interfering with a small cabbage and two tins of beans on his way home from the Builder’s Arms.” This shows Cliff taking the role of a news reporter to try and verbal joust towards Jimmy, by combining a molester and a food lover shows Cliff is quite intelligent. Also, Cliff takes the voice of a news reporter thus showing their boredom by trying to be humorous.

Jimmy seems to be the main instigator to the humorous side of the beginning of ‘Look Back In Anger’ as he is the only one who starts and resumes each subject of their conversation. Although Jimmy comes across as vicious and aggressive he does have a humorous side which it not hard to find, “Do that again, you Welsh ruffian, and I’ll pull your ears off.” From this quotation created by Jimmy, a hyperbole, we can tell that it does come across as aggressive but in a comical way, we know this because Jimmy wouldn’t actually pull Cliff’s ears off because they are friends. Cliff is Welsh and Jimmy does mock the fact of this, but it a kidding way. “Let me get on with it, you big, horrible man.” This quotation made by Cliff, shows more verbal jousting between himself and Jimmy, it takes the slumberous and depressing edge off of the play. This is also dramatic irony, as Jimmy does become horrible, towards the end of the play.

The never-ending consumption of tea also gives off a humorous vibe to the play, in between all of the conflict and verbal jousting, there would be a small section dedicated to drinking tea, “People like me don’t get fat. I’ve tried to tell you before. We just burn everything up. Now shut up and make me some more tea.” This random but humorous quotation made by Jimmy, also indicates that they have a boring lifestyle, as all they do is drink tea and read the newspapers. They have nothing more else to speak about; when they are bored they make tea.

In conclusion, the opening scene of John Osborne’s ‘Look Back In Anger’, in my opinion, is very humorous but at the same time there is a slumberous and aggressive feel to the play. The use of dark humour, satire and sarcasm gives the play an entertaining feel.

How Does John Osborne use Humour at the Beginning of 'Look Back In Anger'?. (2020, Jun 02). Retrieved from https://studymoose.com/how-does-john-osborne-use-humour-at-the-beginning-of-look-back-in-anger-essay 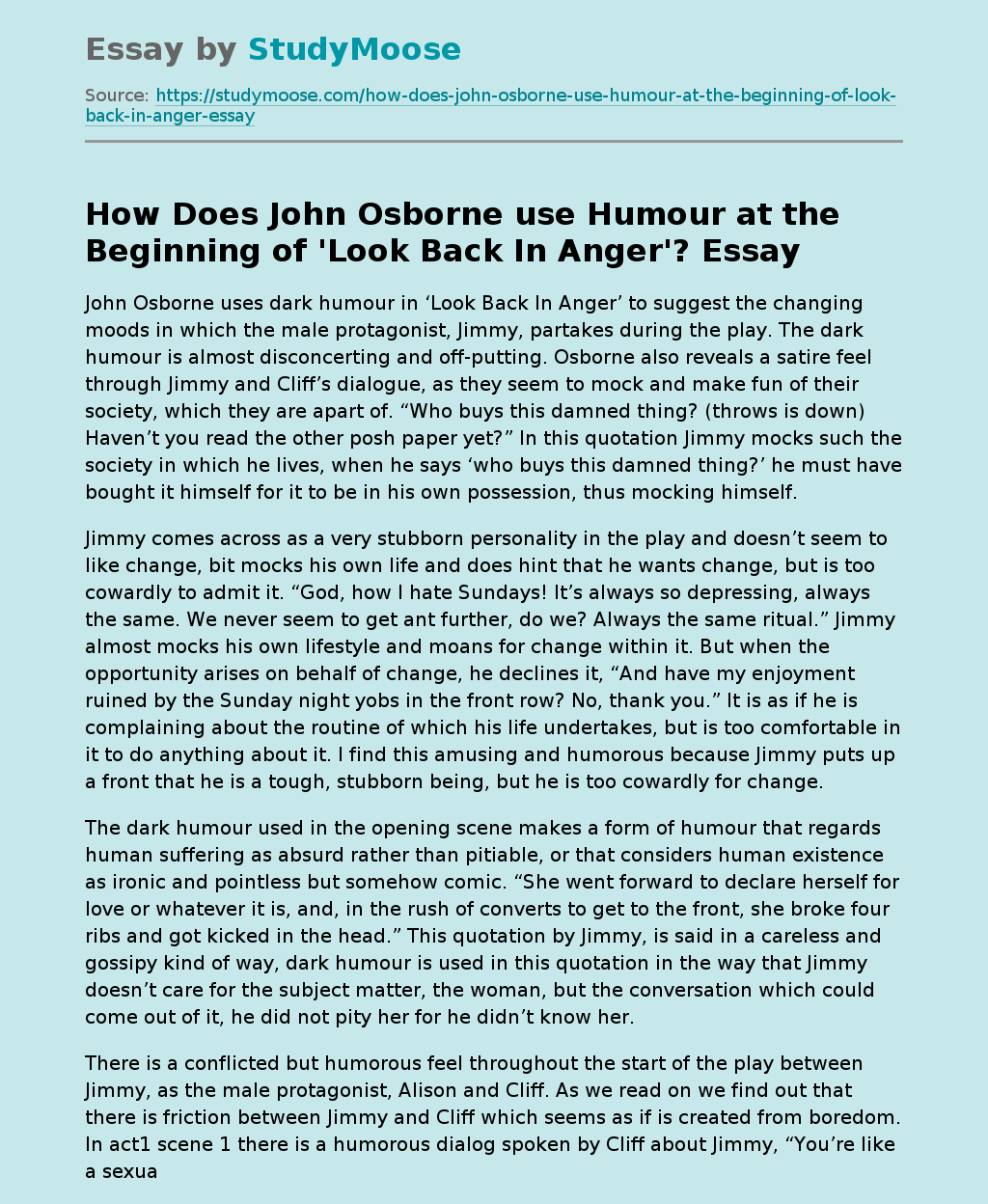