John Osborne admits to there being commercials in the play Look Back in Anger. What are the moral, social and political implications of the play?

There are many different implications of the play, all debatably addressing the problems of post-war youth in Britain in 1956 that had not earlier been displayed, and therefore changed the course of British theatre thereafter. Many of the implications involve aspects and the attitudes of the lower-classes toward the social and political happenings surrounding them in which they have no control over, presenting arguably differentiating moral values from those in wider society. Jimmy Porter is the main character who presents the overall commercials or messages within the play, with his fiery attitude, dry humour and his distaste at the split between classes.

Don't use plagiarized sources. Get your custom essay on
“ John Osborne admits to there being commercials in the play Look Back in Anger. What are the moral, social and political implications of the play? ”
Get custom paper
NEW! smart matching with writer

The key implications lie within the main themes of the play mostly. One of the overlapping implications is that of class conflict and frustration. The concept of class is very much regarded and split within the play, based on Jimmy Porter who displays much frustration because of the class he is situated within. He is said to have spoke for a large percentage of the British population when he ranted about his alienation from wider society, which was not yet shown in British theatre.

The main symbolism for this theme is the array of newspapers which Jimmy reads, even though they are directed at another class. This arguably shows that he does not feel he can fit in with society, as he is well-educated but situated within a lower class. Another is the iron; which has the capability of destruction and symbolises the frustration and potential danger of the educated, yet unemployed, a key example being Jimmy himself.

Jimmy tends to attack those from a higher class due to jealousy or hatred as he regards his own relatives as “pretty posh” and opposes them as much as he hates Alison’s upper-class family; “Alison’s mummy and I took one look at each other and from then on the age of chivalry was dead.” Her father, Colonel Redfern, is not shown heartlessly but Alison’s mother is portrayed as a class-conscious devil that used every tactic possible in the attempted prevention of the marriage between Alison and Jimmy. In opposition to this, Jimmy seems to adore Hugh’s mother purely for the fact that she has been poor all of her life and then perhaps feels injustice, which he then displays to Alison; “you never even sent flowers to the funeral.” He also seems to like Cliff and this is perhaps, as Cliff says himself, “I’m common.” Jimmy can then relate his rants and upsets to another so that he does not feel so alienated within society.

Jimmy also displays a hatred for the built-in preferential treatment within the education system for those at the top and it is this treatment which makes Jimmy’s existence seem so meaningless. He describes himself as not even having attended a “white-tile” university, which was a reference to the newest and least prestigious universities. The real power however, was reserved for those who were born to privilege, had family connections and entree to the “right” schools, which he feels he did not, and could not, attain.

Jimmy then discusses Nigel, the “straight-backed, chinless wonder” who went to Sandhurst and is a member of parliament, but is believed to be insensitive and stupid to the needs of others, however will “make it to the top” due to the social procedures.

It is this characteristic of Jimmy that made Michael Covenall call him a “loveable monster with the gift of the gab and a talent for resentment,” as he could see the passion in Jimmy’s disgust at wider society along with the British population.

Another theme in the play is the anger and hatred that Jimmy expresses against these implications. His passionate anger is directed at those he loves because they refuse to have strong feelings in a society where it seems one does not care for another in the social and power structure. The main reason for this is rooted in the story of watching his idealist father dying for a year because of wounds received fighting in the Spanish Civil War. He then sums up his anger by stating that he “learnt at an early age what it was like to be angry – angry and helpless.” And that he can “never forget it”.

The moral aspects within the play involve the concept of love, sex, marriage and friendship. One of the moral complications is Helena and Jimmy’s relationship whilst Alison is pregnant, and married by definition, to Jimmy, which borderlines on friendship and adultery. Helena accepts her faults because she feels it is not politically or morally correct toward Alison and is not comfortable within the social surroundings as she is accustomed to those of a higher class, which is displayed when she says “by everything I have ever believed in or wanted, what I am doing is wrong and evil.”

Jimmy’s morality ignorance is shown when he directly replaces Alison with Helena at the ironing board in Jimmy’s shirt but knows that what he is doing goes against her beliefs when he says that she is “living in sin”.

The Church also has a direct symbolism for the notion of morality. For Helena, the Church defines right and wrong for her, despite the fact she ignored the strictures of adultery when it suits her. For Jimmy, the Church in essence comes under attack also due to the fact that it has lost its relevance in contemporary life. It does, however, provide him with an easy escape from facing the pain of living in the here and now, thus not allowing him to acknowledge his breach of morality

In comparison to times beforehand and other classes, the notion of the purity of virginity seems to collapse, as is displayed when he calls Helena an “evil-minded, little virgin.” This shows the difference in morality as before this was regarded as compulsory to a marriage.

Another is the role of women and some critics have noticed the irony in the labelling of the ‘kitchen sink drama’, as the domestic world at this time was believed to be the feminine role and little was heard of house husbands. Alison regards herself as very little although she is from a higher class and wealth than Jimmy when she says “he made up his mind to marry me”, and both women take the verbal abuse from him. It does however, change the idea of domestic violence within the lower classes.

The symbolism within this is Alison’s pregnancy displaying a woman’s quietness; she hides the news from Jimmy to avoid trouble, but ends up as the victim, standing for all women. Jimmy’s brutality towards this displays his ability to be able to escape from the real world. From this point of view, Harold Ferrar said that he is a “man of decency and charity who is one of life’s beautiful losers’, in that Jimmy is within a lower-class but is able to detain from the social surroundings and cope. Kitchen sink dramas rarely centred on the emotions of women, but here displays Alison’s struggle with changing class, in that she had to “get used to things” and “wishes she could feel young again”.

The main political message of the play seems to be that actions speak louder than words. Jimmy displays his resentfulness often to the higher classes, however lacks goal and purpose to take constructive action for his beliefs, other than rebel by gate-crashing parties and came to regard Alison in her own words as a “hostage from those sections of society they had declared war upon,” showing Jimmy’s animalistic nature.

Another is that people seem to be born out of what should have been their age and time, or placed in a different society than what is suited to the one they have been accustomed to. Jimmy is born out of his time, and this is perceived when Helena states there is “no place for him anymore” bringing about problems of social identity he then faces, due to the struggle to fit in somewhere, as his occupation differs from his education standards; operating a sweet stall.

He sees suffering in life as the only way to “earn” one’s true identity, such as when Alison’s loss makes her come back to Jimmy. Helena learns that she can only be happy is she live according to her principles of right and wrong, so leaves Jimmy. Colonel Redfern is also caught out of his time. The country he left as a young officer no longer exists, and Jimmy calls him “one of those sturdy plants left over from the Edwardian Wilderness that can’t understand why the sun isn’t shining anymore” to which the Colonel agrees to.

In conclusion, it is evident that each of the moral, social and political implications emphasise the commercials within the play and the beliefs of the times through different interpretations of the character of Jimmy Porter. It changed British theatre greatly due to the arising of problems never before highlighted within the lower class, all surrounding each of those aspects.

John Osborne admits to there being commercials in the play Look Back in Anger. What are the moral, social and political implications of the play?. (2020, Jun 02). Retrieved from http://studymoose.com/john-osborne-admits-commercials-play-look-back-anger-moral-social-political-implications-play-new-essay 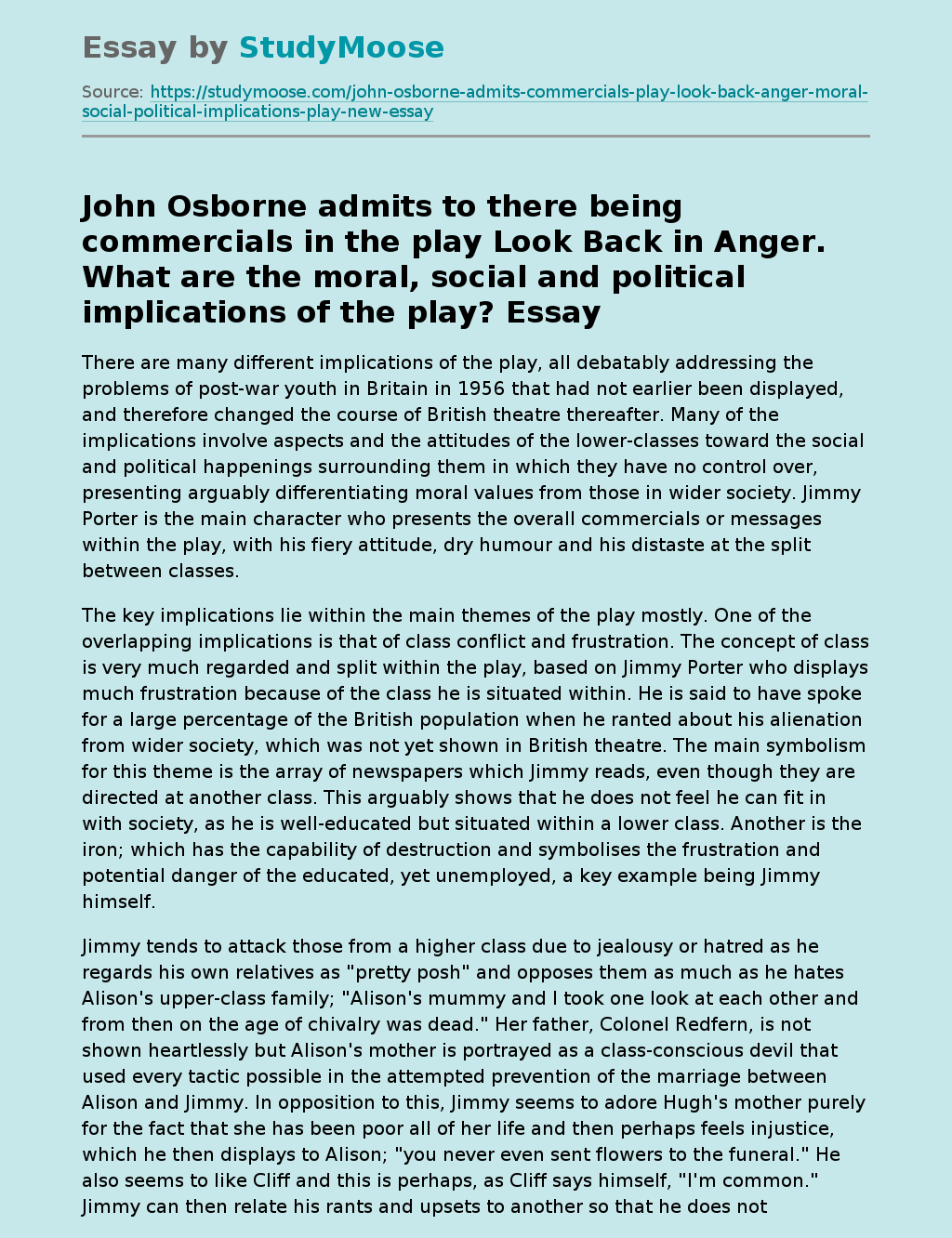