Back to the Future: Wordsworth’s “Ode to Duty” and “Elegiac Stanzas”

A past attitude is reverted to and revised in Wordsworth’s “Ode to Duty” and “Elegiac Stanzas.” Employing geographic metaphors, both celestial and earth-bound, the poems climb over rocky Wordsworthian terrain that details his reconciliation between past and present and implications of the future. Though vastly different stylistically “Ode to Duty” utilizes an antiquated verse form and language, while “Elegiac Stanzas” is written in Wordsworth’s beloved “language of men” and in the internal willfulness on the poet’s part to change versus reaction to external stimuli, the poems parallel in their desires for resolution of a disarrayed soul via the calming sublime power of either an abstract concept or a naturalistic piece of art.

Don't use plagiarized sources. Get your custom essay on
“ Back to the Future: Wordsworth’s “Ode to Duty” and “Elegiac Stanzas” ”
Get custom paper
NEW! smart matching with writer

Wordsworth deviates from his course of democratic poetry in “Ode to Duty” by exercising a classical form, the ode, and manipulating the elevated language it affords the poet. Even the opening quote is from a Greek source, Seneca, which foreshadows the poem’s anachronistic call to duty.

Proficient in: Back to The Future

The poem is divided into seven tetrameter octets, of which the final line is Alexandrine. The French origins of the Alexandrine line further confuse the poem’s miscegenational heritage, and conspire with the “missing” eighth stanza (were the poem to have an orderly arrangement of eight syllables per line, eight lines per stanza, eight stanzas total) to cast an ambiguous shadow over Wordsworth’s conception of duty. As suggested by the allusion to Seneca and the ode form, it is one of poetic duty without ever calling attention to the act of writing poetry.

Similarly, “Elegiac Stanzas” confronts the death of Wordsworth’s brother by only slightly focusing on the actual death but instead turning its attentions to the vacillating emotional responses to a painting. The bouncy “abab” rhyme scheme and standard iambic pentameter accentuates Wordsworth’s initial rose-colored reaction, then later heightens the tension of his haunting observations. The short quatrains aid the mercurial shifts of the emotional poet, more so than the lengthy stanzas of “Ode to Duty” which dwell on single concepts. The stanzaic breaks lend the impression of a longer poem, though “Elegiac Stanzas” has only six more lines than “Ode to Duty.” The montage effect also mirrors the composition of the subject matter; just as a painting is a composite of several pigments, brush-strokes, and impressions, so is “Elegiac Stanzas” a patchwork collection of complementary and opposing thoughts. And, as the painting’s impact on Wordsworth grew from simple acceptance to complex musings, so, too, can the quatrains be interpreted as neat organizations, or chaotic sequences.

The struggle between chaos and calmness is at the heart of “Ode to Duty.” With an allusion to Milton and through the ode’s archaic language and form, Wordsworth connotes duty’s rigidity: “Stern Daughter of the Voice of God!/ O Duty! if that name thou love” (1-2). The rigidity is a divine shepherd for the errant and infirm: “Who art a light to guide, a rod/ To check the erring?/ And calm’st the weary strife of frail humanity” (3-4, 8). Wordsworth deploys a travel conceit to describe his youthful, independent straying: “I, loving freedom, and untried;/ No sport of every random gust,/ Yet being to myself a guide,/ Too blindly have reposed my trust” (25-8). Without an able guide, the autonomous voyager is blind. This is echoed in “Elegiac Stanzas,” as the poet contends that simple “happiness, wherever it be known,/ Is to be pitied; for ?tis surely blind” (55-6). The developed person welcomes “frequent sights of what is to be borne!/ Such sights, or worse, as are before me here,” though the visions may distress him (58-9). The parallel to completeness of character in “Ode to Duty” is suggested by the antithetical, constricting grip duty applies to windy freedom: “And oft, when in my heart was heard/ Thy timely mandate, I deferred/ The task, in smoother walks to stray;/ But thee I now would serve more strictly, if I may” (29-32).

Wordsworth’s deferential inquiry sounds a note in the chorus of the poem’s obeisance motif. His desire to mend his ways was brought about “Through no disturbance of my soul,/ Or strong compunction in me wrought?/ But in the quietness of thought” (33-4, 36). The poem’s devotion to an abstract concept exemplifies the willful internality of the poet’s decision. This internality leads the poet to “supplicate for thy control,” an act that shifts the poem into the religious territory of reverence. Indeed, Wordsworth subtly raises his travel conceit from the earth to the heavens. “In the quietness of thought,” a time that is often reserved for prayer, he decides that “Me this unchartered freedom tires;/ I feel the weight of chance-desires” (37-8). The unmapped liberalism of random urges weighs him down and bounds him to the earth; the austere and personified guardian of duty, on the other hand, steps lightly between the earth and the sky: “Nor know we anything so fair/ As is the smile upon thy face;/ Flowers laugh before thee on their beds/ And fragrance in thy footing treads;/ Thou dost preserve the stars from wrong;/ And the most ancient heavens, through Thee, are fresh and strong” (43-8). The craving “for a repose that ever is the same,” a constancy that may, in the future, hold for him “a blissful course,” is made salient in the comparison to stars, long regarded as shapers of destiny (40, 21). The “repose” here means “sleep,” whereas in the fourth stanza “reposed my trust” means to store. The analogy here is not lost on Wordsworth to place one’s trust only in oneself and not a higher source is to slumber peacefully and ignorantly.

Blissful slumber is Wordsworth’s critique of his former self in “Elegiac Stanzas.” His memory of Peele Castle is an unwavering one that he saw “every day; and all the while/ Thy Form was sleeping on a glassy sea” (3-4). The reminiscence of the castle evokes images of constancy: “So pure the sky, so quiet the air!/ So like, so very like, was day to day!” (5-6) The anaphoric use of “so” lulls the reader into a repetitive dream-state, one in which “it seemed no sleep;/ No mood, which season takes away, or brings”; his former self was locked into an oppressive stagnancy of disposition, one quite different from the helpful guiding hand of duty in “Ode to Duty” (9-10). Whereas wind blew the young Wordsworth in his exploration, wind is an impotent force of nature in his construct of the castle: “No motion but the moving tide, a breeze,/ Or merely silent Nature’s breathing life” (27-8).

The speaker’s renewal charges his once-complacent view of nature with a brutal and morbid electricity that stresses its adjectives with caesurae and subverts the rote iambic meter: “And this huge Castle, standing here sublime,/ I love to see the look with which it braves,/ Cased in the unfeeling armour of old time,/ The lightning, the fierce wind, and trampling waves” (stresses in bold) (49-52). The analogy between the stoic castle and the stolid Wordsworth who must accept his brother’s death are apparent, but more subtle is the storm’s visibility and palpability that results in a possible pun: “O ?tis a passionate Work! yet wise and well,/ Well chosen is the spirit that is here;/ That hulk which labours in the deadly swell,/ This rueful sky, this pageantry of fear!” (45-8) The zeugma of “well,” as both a signifier of healthiness and of quality, connotes a third meaning, that of a physical well of water. Under this assumption, the “hulk which labours in the deadly swell” carries the image of chaos lurking within the supposedly safe confines of a well, another exhibition of chaos contained within comfort. What is more, the underground associations of the well polarize the elevated “rueful sky,” pointing again to the hectic battleground of the speaker’s emotions.

As for the cause of the two divergent roads in Wordsworth’s yellow wood of art criticism, the shipwrecked death of his brother is the culprit. The Freudian implications of the nightmarishly imagined death in a violent storm are clear enough, but what distinguishes this revised attitude from that in “Ode to Duty” is the lack of choice in the matter. Unlike his pleasant supplication to duty, the speaker has now “submitted to a new control:/ A power is gone, which nothing can restore;/ A deep distress hath humanised my Soul” (34-6). His dependence on external forces, especially those of fickle nature, stand in stark contrast with the utter blankness of the poem’s first half, and the rapid series of quatrains form the connective tissue in his emotional repairs. His own caprices shine through in the second to last stanza, after having praised the stolidity of the castle but condemning his own previous and passive response: “Farewell, farewell the heart that lives alone,/ Housed in a dream, at distance from the Kind!” (53-4) He has turned 180 degrees; from calmness layered over calmness to calmness within the storm, the poet has managed to mine catharsis and rebirth out of tragedy.

There was no apparent tragedy in “Ode to Duty,” but perhaps Wordsworth felt mankind was on the verge of one. His feelings toward the French Revolution had soured, and he may have found the new liberation and fraternity being portioned out in unequal measures in poetry. Change is a good thing, both “Ode to Duty” and “Elegiac Stanzas” suggest, but only when adopted “in the quietness of thought”; otherwise, rash decisions only mirror the frenzied environments out of which they grew. Whether or not “Ode to Duty” or “Elegiac Stanzas” have veiled political agendas is unclear; what is ingenious is Wordsworth’s ability to deliver so many comparable messages in such contrary envelopes.

Back to the Future: Wordsworth’s “Ode to Duty” and “Elegiac Stanzas”. (2019, Aug 19). Retrieved from http://studymoose.com/back-to-the-future-wordsworths-ode-to-duty-and-elegiac-stanzas-essay 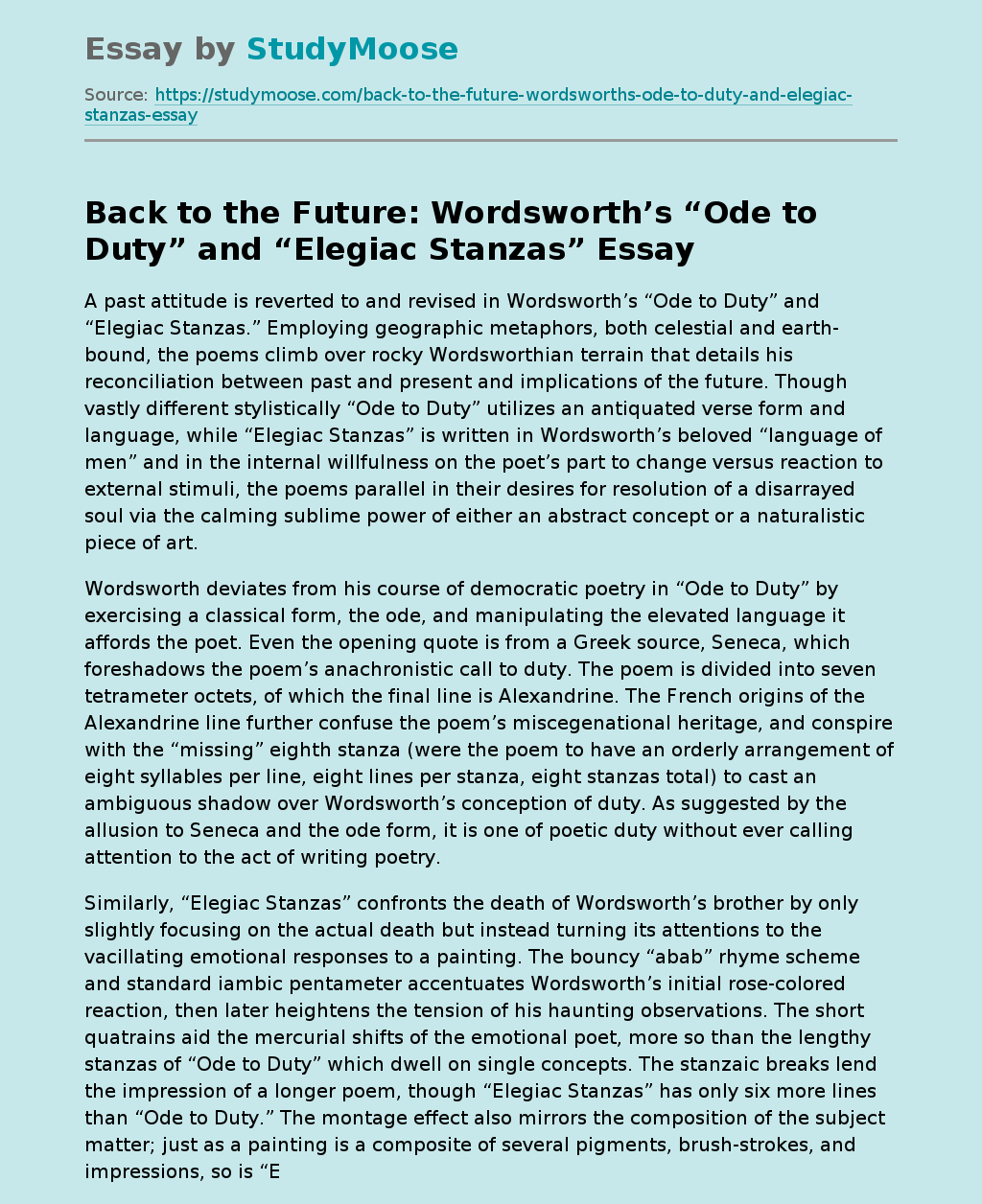