Ode on Intimations of Immortality by William Wordsworth

The Romantic Poet William Wordsworth wrote “Ode on Intimations of Immortality” in the midst of the Romantic Period during the early 19th century. This was a time of new scientific thought, observing nature, and social reform.

This great poem gives expression to the human instinct for a belief in immortality. The poem is built around what may be called the doctrine of reminiscence. The child remembers the life he led in heaven before his birth in this world. The child is, therefore, surrounded by a heavenly glory.

Don't use plagiarized sources. Get your custom essay on
“ Ode on Intimations of Immortality by William Wordsworth ”
Get custom paper
NEW! smart matching with writer

His memories of a pre-natal existence invest all Nature with a divine light. In other words, when the child looks at Nature, he finds all objects of Nature wrapped up in a dream-like splendour. But, as the child grows, he falls more and more under the influence of this world and, therefore, his memories of heaven become dimmer and dimmer till they fade out of his mind. The child remembers that he lived in heaven before his birth, while the grown-up man has no such recollection.

Therefore the child is greater than the man.

In maturity one misses the heavenly light which one saw as a child in the objects of Nature. But maturity has its own compen¬sations. With maturity comes the faith in a life after death. Maturity, too, brings reflection (or “the philosophic mind”); while the sight of human suffering gives rise to “soothing thoughts”. In this temper, even the meanest flower can arouse in a man thoughts which are so deep that they cannot be expressed even through tears.

As an ode, Intimations of Immortality has an irregular form. However, it is by general consent one of the greatest of Wordsworth’s poems. It is built on a simple but majestic plan. The first four stanzas tell of his spiritual crisis; of a glory passing from the earth, and end by asking why this has happened. The middle stanzas (v-viii) examine the nature of this glory and explain it by a theory of reminiscence from a pre-natal existence. Then the last three stanzas show that, though the vision has perished, life has still a meaning and a value. Wordsworth has very vividly described the psychology of the child. The child is an imitator, an actor who performs all parts, and who copies every action and gesture that he sees. The poem is mainly autobiographical and reminiscent of the poet’s past life.

The radiance and glory of Nature, which he declares as having seen in his childhood, was a part of his own personal ex¬perience, while he also felt the unreality of the outward objects to which he refers in the ninth stanza. We have his own statement in support of this. Wordsworth’s pictorial gift or image-making power may be noticed in this poem.He gives vivid pictures of the rainbow, the rose, the moon shining in a cloudless sky, the star-light falling on waters, the children collecting fresh flowers, the babe leaping on his mother’s arm, etc. Wordsworth was a keen worshipper of Nature. He is the grea¬test Nature poet in English Literature. ‘The ode clearly brings out the difference between his love for Nature as a child and his love for Nature as a man. As a child, he had a passion for Nature, and he experienced intoxicating joys on seeing it. But he developed a spiritual love for Nature when he became a man.

His love for Nature was now meditative, sober and reflective and even the most ordinary objects of Nature gave rise to deep and profound thoughts in him. Having witnessed human suffering, he looked at Nature thoughtfully. The ode is not written in the language Wordsworth regularly used in his poetry. Its tone is high and stately. Wordsworth thought his subject so important that he treated it in what was for him an unusual manner, and for it he fashioned his own high style. The poet has used such rhythmic and effective phrases that many of them are now commonly employed in the English language. Words used to express thoughts and emotions in this poem are very appropriate. The grandeur of language befits the grandeur of theme. There is thus a perfect harmony between thought and expression.

Although the ode contains a metaphysical doctrine, yet there is in it a deep and sincere personal emotion which gives it a lyrical character. The first four stanzas in which the poet expresses his sense of loss and the last two stanzas where he refers to the compensations which make him happy are intensely emotional and possess a singing quality. This has been expressed in the ode. The poet refers to human suffering which he has witnessed and the sympathy which he feels for his fellow human beings. This sympathy for mankind is common to almost all the romantic poets. The sober close of this great ode has been compared to the close of a splendid evening. In other words, the reflective mood of the poet deepens in the last stanza. No one can remain untouched by the restful and soothing effect of the music at the close.

Ode on Intimations of Immortality by William Wordsworth. (2016, Nov 13). Retrieved from https://studymoose.com/ode-on-intimations-of-immortality-by-william-wordsworth-essay 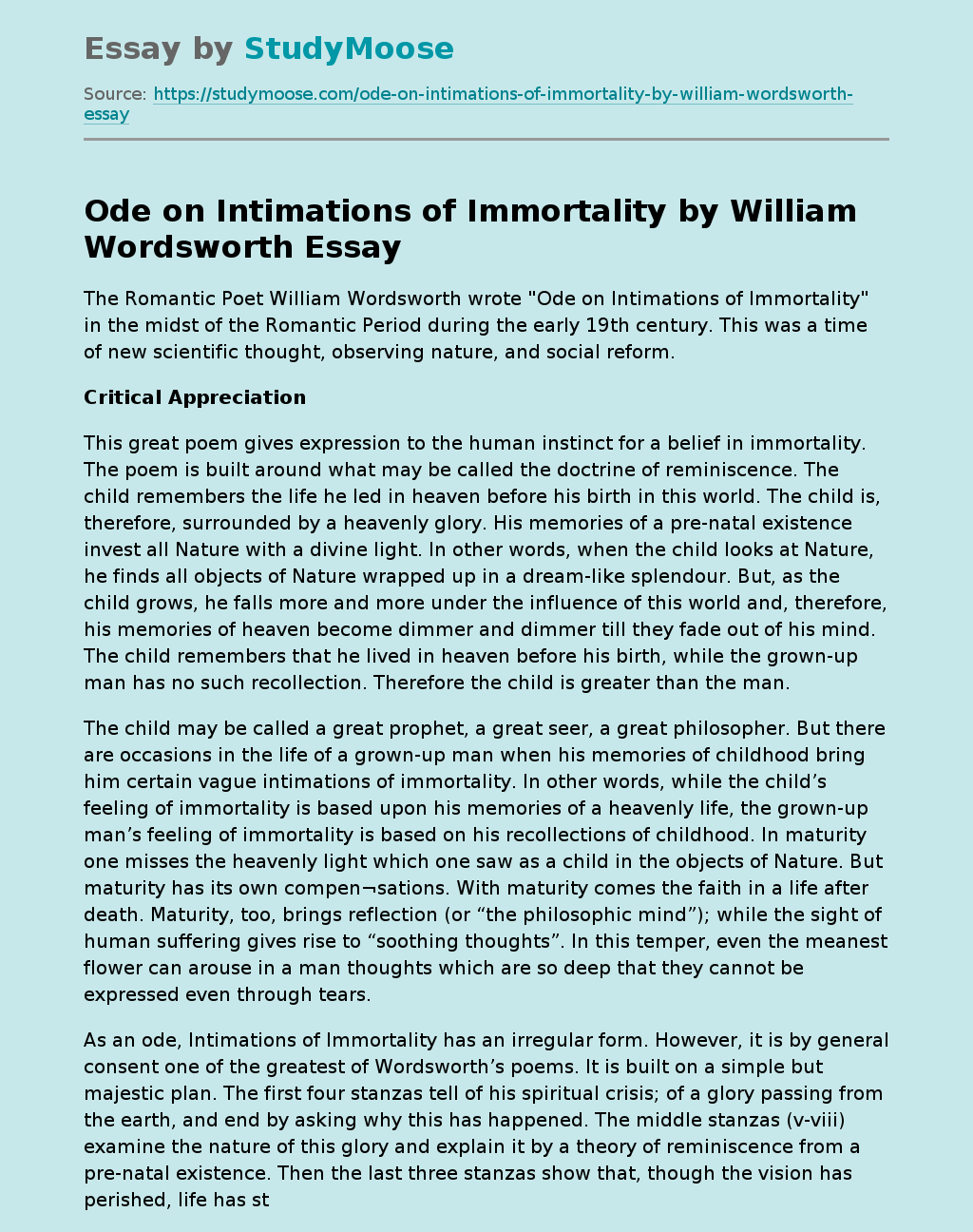