St. Thomas Aquinas on the Immortality of the Soul

For thousands of years now, the human body is believed to be consisting of two main entities: the body and the soul. Several beliefs and opinion have have been written, spoken and shown regarding the existence of a soul. Some say that a soul goes to God’s Divine Home days after a person dies. Other beliefs state that a human being’s soul wanders around the earth after death. Parting from popular notion, the question still lingers, what is a soul? Religion as well as philosophy defines it as an essence of self awareness unique to a particular living entity.

Don't use plagiarized sources. Get your custom essay on
“ St. Thomas Aquinas on the Immortality of the Soul ”
Get custom paper
NEW! smart matching with writer

Even the dictionary has several definitions for the term soul. One of which is that a soul is a spiritual part of a person regarded in its moral aspect. Based on these definitions, prominent philosophers, intellectuals and theologians give out their opinion on what a soul is.

St. Thomas Aquinas is one of these persons to bless us with his own view on what a soul is. St. Thomas regards the soul as a form that is apart from the physical composition of the human body (Copleston, 1955). St. Thomas has stated many of his beliefs about the soul.

A notable fact is his argument toward the immortality of the soul. St. Thomas believed a living being is composed of matter and form, this is the body and the soul, hence, making the person alive. However, St. Thomas claims that only one of the two can be the form, considering the fact that the body is a physical composition, making it the matter.

He argues on the basis of philosophers who claim that the soul is a body. According to the second book of the Summa Contra Gentiles annotated by Joseph Rickaby, St. Thomas insinuates that : 2 It is easy to solve the arguments whereby some have endeavoured to prove that the soul is a body. They point such facts as these, — that the son resembles the father even in the accidents of his soul, being generated from the father by severance of bodily substance; and that the soul suffers with the body; and is separated from the body, separation supposing previous bodily contact.

Against these instances we observe that bodily temperament is a sort of predisposing cause of affections of the soul: that the soul suffers with the body only accidentally, as being the form of the body: also that the soul is separated from the body, not as touching from touched, but as form from matter; although there is a certain contact possible between an incorporeal being and the body, as has been shown above.

(chapter V) This text is contrary to Plato’s theory of the union of the intellectual soul with the body. The theory states that the intellectual soul is not united with the body as form with matter, but only as the mover is with the moved, saying that the soul is in the body as a sailor in his boat: thus the union of soul and body would be virtual contact only, of which above.

But as such contact does not produce absolute oneness, this statement leads to the awkward consequence that man is not absolutely one, nor absolutely a being at all, but is a being only accidentally. (cited in Rickaby, 1905) St. Thomas strengthens his philosophy on the soul’s immortality through his claim that the soul does not perish with the body. In the second book of the Summa Contra Gentiles, he wrote that if the human soul is destroyed by the destruction of the body, it must be weakened by the weakening of the body.

But the fact is that if any faculty of the soul is weakened by the body being weakened, that is only incidentally, inasmuch as that faculty of the soul stands in need of a bodily organ, as the sight is weakened by the weakening of the organ of sight, but only incidentally, as may be shown by this consideration: if any weakness fell essentially upon the faculty, the faculty would not be restored by the restoration of the organ; but now we see that however much the faculty of sight seems weakened, it is restored, if only the organ is restored.

(Adler 987). 3 Furthermore, St. Thomas Aquinas argues that the soul, when separated from the body does not lose its consciousness and intellect, the soul just departs its physical manifestation and brings the intellect with it. St. Thomas builds up his argument by selecting a verse from the scriptures. He quoted verses from the books of Wisdom and Ecclesiastes. Hereby is banished the error of the impious in whose person it is said:

We were born out of nothingness, and hereafter we shall be as though we had never been (Wisd.Ii, 2); in whose person again Solomon says: One is the perishing of man and beast, and even is the lot of both: as man dies, so do beasts die: all breathe alike, and man hath no advantage over beasts (Eccles iii, 19): that he does not say this in his own person, but in the person of the ungodly, is clear from what he says at the end, as it were drawing a conclusion: Till the dust return to the earth, from whence it came; and the spirit go back to the God who gave it (Eccles xii, 7).

The quoted verses negates Plato’s theory and strengthens Aquinas’ belief about the immortality of the soul. The soul according to St. Thomas Aquinas  is immortal. It does not decompose like the body does in due tome. Aquinas claims that the soul is beyond physical as far as its state is concerned. Moreover the theories implied by St. Thomas Aquinas are a mixture of philosophy, theology and his own faith.

St. Thomas Aquinas on the Immortality of the Soul. (2017, Apr 21). Retrieved from https://studymoose.com/st-thomas-aquinas-on-the-immortality-of-the-soul-essay 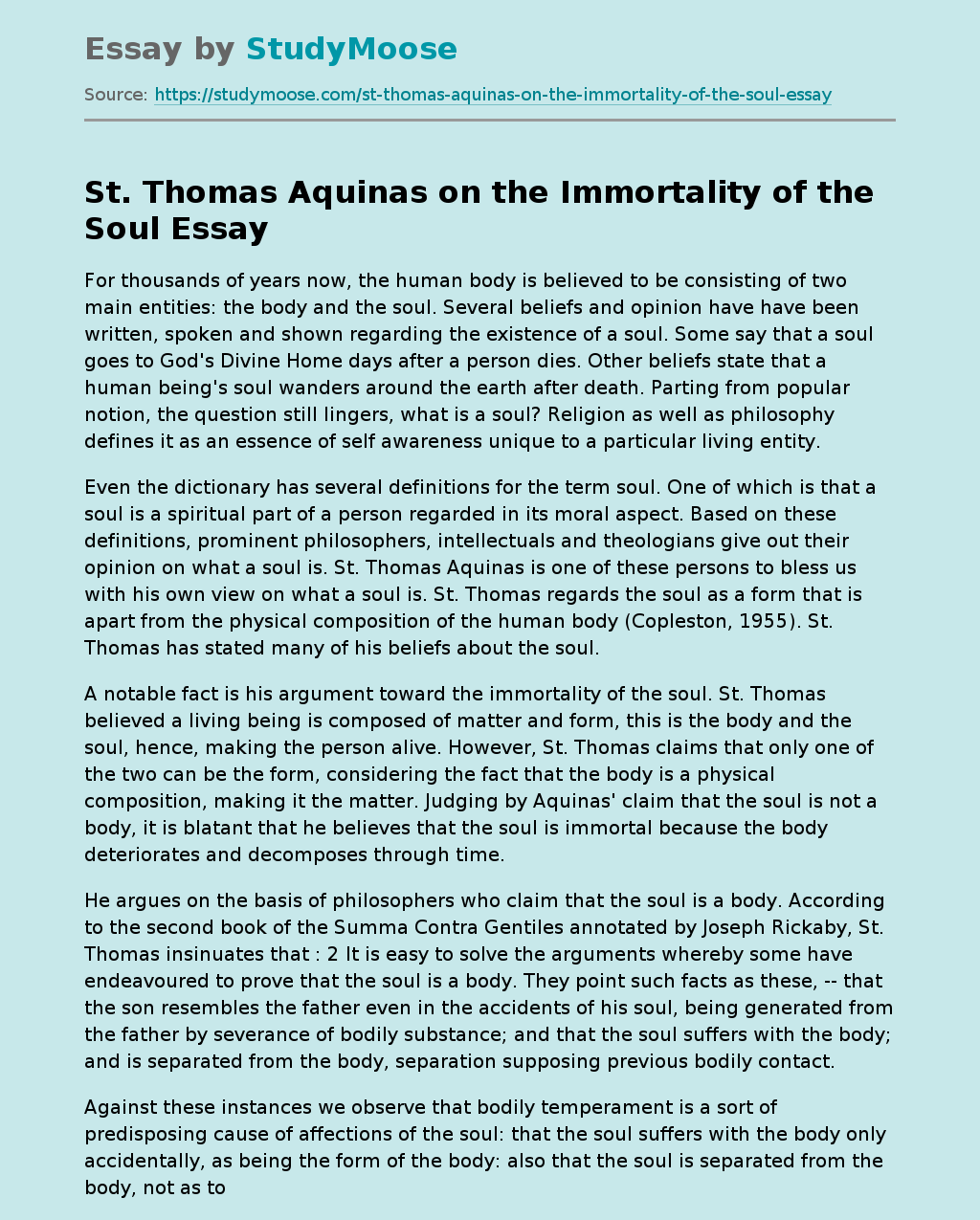