The distinction between what is good and evil has always been a question of ethics or moral philosophy.  In fact, the goodness or badness of human actions is the preoccupation of morality.  However, different ethical systems vary on their perspectives as to what makes an action good or evil.  One of the people who offer a unique view of morality is St. Thomas Aquinas.

in Magee 1).”     This is quite a vague premise for ethics to follow.  So what does Aquinas mean by this?  In this statement how does he mean by good and evil?  Aquinas upholds that instead of the consequences, it is the intention that makes the act good or evil.  However, the capacity to foresee the consequences also affect the goodness or badness of an an act.

For instance, a man acts out of good intentions but suddenly foresees the evil consequences of his act.

If he  pushes through with such act, it makes that act evil. Therefore, according to Aquinas, the goodness or badness of an act lies in the agent’s intentions, and his capacity to determine whether good or evil consequences will arise from such act.       Nonetheless, Aquinas’ ethical system cannot be further elaborated  without discussing his idea of Natural Law.In this paragraph be sure to have a clear statement of what makes an act good or evil and when consequences can make an act good or evil based on what he says in the 11th excerpt.

All of creation is governed by what is called the Eternal Law.  It is “the rational pattern or form of the universe that exists in God’s mind (Dyson 1);” the rules that operate on its existence.  Moreover, all of creation has in its very nature the very law that governs the universe.  “Things of creation has the law embedded in their nature…creation reflects the Eternal Law in their own natures (Magee 1).” Hence, man as God’s creation, has in his being a manifestation of the Eternal Law.  This is what is called the natural law: it is “human’s participation in Eternal Law, through reason and will (Magee 1).”

What is good for Aquinas is that which is inherent in nature.  What is good for man is what is in tune with his nature.  “Human goodness depends on performing acts that are in accord with our human nature (Floyd 1).” All of mankind is given the gift of reason.  “The activity that sets the human agent apart from all others is rational activity (McInerny and Callahan 1).” Reason is then the very instrument used to determine the goodness or badness of things.  According to Magee, “we must exercise our freedom by choosing what reason determines is naturally suited for us (1).” He adds, “A person does anything and everything he or she does only because the thing at least “appears” to be good (Magee 1).” Therefore, we do what we think is good.  If we use reason, which is in our nature, in doing something, that is good.

How does reason determine what is good or bad? Reason consists of two powers: cognitive and appetitive.  The former refers to the intellect, while the latter speaks of the will.  It is the intellect which knows and understands, the one that “apprehends the goodness a thing has (Floyd 1).” Consequently, the will is the “native desire for the understood good (Floyd 1).” The process of reason then begins with the intellect recognizing the good, and the will wanting that good.  The will responds to what the intellect thinks is good.  Thus, “acts of will are dependent on acts of intellect (Floyd 1).”

How can this ethical concept be applied in practical situations? For instance, a man named Joe gives some money to Jack, who is homeless and panhandling.  Joe knows Jack and is aware that Jack has a severe case of heroine addiction, which is the cause of his helessness.  In terms of intention, Joe’s action was good.  He was charitable and found it in heart to help.

However, he knew beforehand that Jack is a heroin addict, which presupposes his tendency to use that money for drugs.  Hence, Joe’s act is evil.  It is because despite his good intentions, he foresaw the evil consequence that will arise from his action.  The fact that Joe knows Jack’s heroin addiction means he is aware that the money might be used for something else.  Because evil consequences were foreseen, the act becomes evil.

Another situation finds Joe giving money to Bob, a panhandler that Joe does not know.  Bob said that he was hungry and that he would use the money for food.  Unbeknownst to Joe, Bob uses the money to buy his heroine fix for the day.  Again, what Joe did was a good act.  It is rational to give a man in need some help.  This time, however, Joe cannot possibly foresee the evil consequence because he does not know Bob.  He sees a stranger who needs help, and he gives him some money, thinking it is for food.  Joe’s act is good because he’s intention was good and he did not foresee the negative effect of his action.  To him, a hungry man needs money to buy food, so he gives the man money.  He is not aware that Bob is into heroin, so he does not have the ability to achieve such foresight.  Because the consequence is not foreseen, the act remains good.

I disagree with the first situation, and the problem lies on the philosophy itself.  As long as an action is done according to man’s nature, it is good.  If man uses his reason in doing an act, it is a good act.   However, even Aquinas acknowledges the fact that human reason can be faulty.  He is aware that there are “intellectual limitations [that] prevents us from apprehending what is good (Floyd 1).” Floyd adds, “Cognitive errors and excessive passion can distort our moral views and, in turn, incline us towards the wrong things (1).” We do what we think is good, regardless of whether it is indeed good or bad.

For Aquinas, evil is the privation of good.  Nevertheless, he also believes that everything has innate goodness in them, which makes the entire discourse confusing.   Joe giving Bob money is a good act; he decided to help the man in need.  Bob lied to him, but that does not change the goodness of his action.  In contrast, Joe should not have given Jack money, since he knows the history of his addiction.   Giving him money for illegal substances does not help Jack at all; Joe simply tolerates the habit.  Furthermore, both Jack and Bob think that heroine is good.  We all know that is not the case.  They are mistaken in their view of what is good, but since that is what their erroneous reason thinks is good, they act toward it.

In general, the moral philosophy is too lenient, too vague, too general an ethical system.  Human reason as basis of the goodness and badness of things is faulty, since humans are not perfect.  There should be a fine line between what is good or evil, one that is not solely dependent on what an individual thinks is good or bad. This is why Aquinas thinks Natural Law is so important. He has a highly robust check on what we might subjectively believe to be good or evil, namely, God’s laws.  Reason used alone is not sufficient for Aquinas. It is when reason accesses, participates in the Eternal Law of God that we can be sure.

The analyses of the cases needs some work. My suggestion: State his view of what makes an act good or evil and under what circumstances consequences may serve to make an act good or evil. Then apply this to the cases. In each of the cases, determine whether the intention is good AND whether the consequences of using the money on drugs are foreseen. How does being able to foresee or not foresee the use of the money on drugs affect our evaluation of the cases? Even if they wanted to help, the act still may be evil, because the consequences may be foreseeable.

[gerardo c1]I’m not sure I see how the above considerations are being used in the analyses that follow.

[gerardo c2]Can Aquinas also account for this? It does seem that Jack’s using the money for drugs is a foreseen consequnce. How would this affect the analysis you gave of the case above. 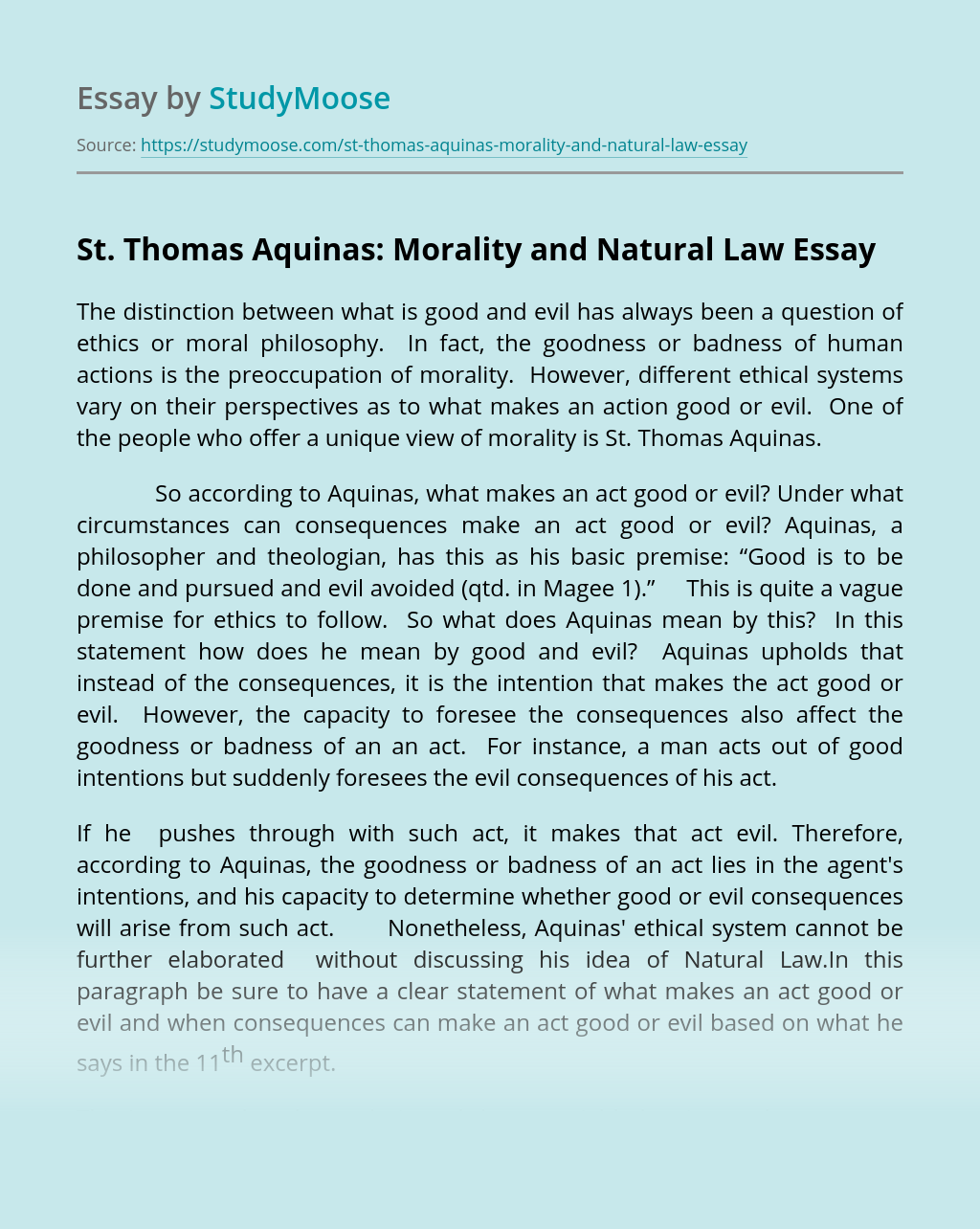