The case study is about Mr. Latimer and the actions he did in the name of ending the pain and torture that Tracy, his twelve-year daughter, was going through. Tracy suffered from Cerebral Palsy; it was due to this that Tracy was quadriplegic. She was not able to do anything on her own and therefore used to rely on other people for assistance. Feeding herself was difficult; hence, it was the family’s responsibility to ensure that their daughter did not sleep hungry.

Ever since she was born, Tracy had undergone two surgeries, which according to Mr. Latimer had caused more pain to her than before. When Mr. Latimer was told that His daughter was to undergo another surgery, he was not comfortable with this idea since it meant even more pain for Tracy. It was because of this that Mr. Latimer decided to end his daughter’s life by exposing her to carbon monoxide.

Later on Mr. Latimer confessed to killing his daughter and it was because of this that he was accused of second degree murder and issued a 10-year jail term, which was in accordance with the Criminal code.

In my opinion, Mr. Latimer was morally right when he decided to end his daughter’s life. Since he was the parent, he knew exactly the pain that Tracy was going through. Latimer knew that the surgeries that his daughter was being subjected to were doing her more harm than good. This is because she was only a twelve-year old and such pains were unbearable.

It is obvious that Latimer loved his daughter; this is because he allowed two surgeries to be performed on her. Mr. Latimer had the perception that the surgeries would improve Tracy’s life but this never happened, instead, it made her life unbearable. Due to this, Mr. Latimer was against another surgery since it meant additional pain and suffering. Hence, in my opinion, ending his daughter’s life was the moral thing to do as a parent.

The verdict made on Mr. Latimer was morally wrong. This is because the jury never stopped for a while to consider the pain that this girl used to undergo on a daily basis. According to Bauslaugh (2014), it would be wrong to equate Latimer to a murderer. This is because unlike other murderers who are malicious, Latimer ended his daughter’s life out of love and mot malice. By deciding to end his daughter’s life, which was always painful, Latimer was morally right. Ending a person’s life in order to end the pain that one is going through has always been referred to as euthanasia. Medical practitioners have practiced euthanasia for decades and it is still active to date. In order to embrace morality, the jury would not have paid much attention to the fact that Latimer committed murder but on the main reason that prompted him commit the act.

According to Perez and Moore (2012), whereas utilitarianism is the process where one does an act that he or she beliefs is morally right, Formalism is the act where one’s actions are either right or wrong. The main difference between utilitarianism and Formalism is that whereas Utilitarianism first considers the reasons behind certain actions, it is different with formalism. This is because unlike utilitarianism, Formalism never considers morality or the reasons why one committed a certain actions. This is because in formalism, one’s actions are either right or wrong.

In my opinion, instead of formalism, the Court would have embraced the utilitarianism theory before making the final rulings. According to Perez and Moore (2012), utilitarianism always puts into consideration the happiness of the majority. Happiness is usually a byproduct of one’s action and not a defensible principle. According to studies, before making any conclusions, it is usually vital that one acts in a manner that creates happiness to many people (Perez & Moore, 2012).

According to Perez and Moore (2012), people are often distinguished on their level of morality, when faced with a moral dilemma; a moral person usually calculates the amount of happiness that his or her actions will cause. For instance, had the jury been moral, it would have stopped to consider the consequences of the rulings before accusing Latimer of second degree murder and finally sentencing him to prison. Latimer’s sentence received a lot of uproar from the public; this is because many people were not happy with the manner in which the ruling was made (Bauslaugh, 2014). Since utilitarianism puts into consideration the happiness of the majority, it becomes evident that one does not consider the repercussions that he or she might face because of the actions made (Perez & Moore, 2012). 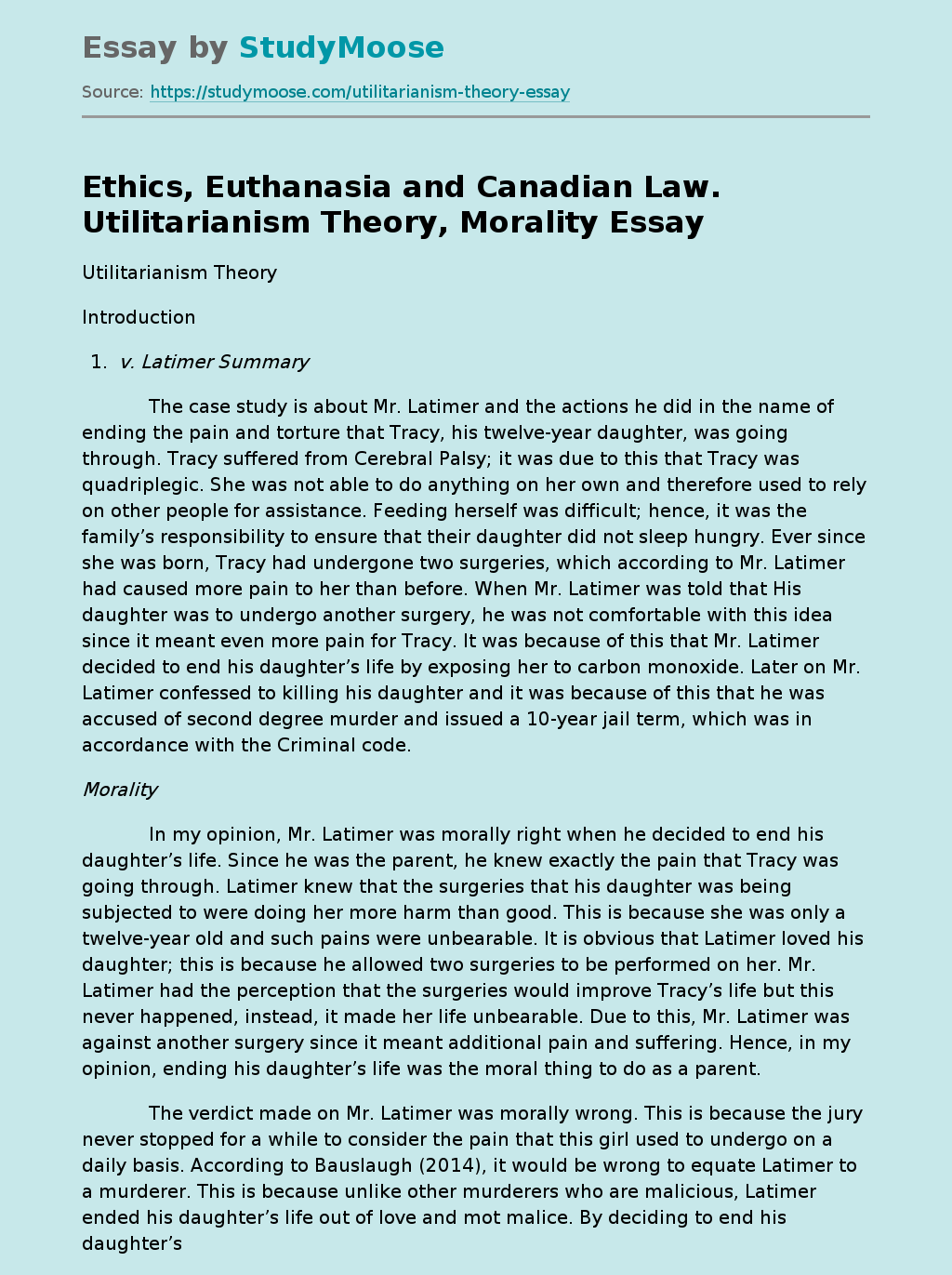