In the world today there have been many controversial topics including topics such as euthanasia, the death penalty and gay marriage. One that has always stood out in particular is the controversy over torture and interrogation techniques for terrorists in US custody . Ethically you can argue for or against these torture and interrogation techniques but what would John Stuart Mill’s viewpoint be on this highly debated topic? Before we go into John Stuart Mill’s Utilitarianism Ethics it is imperative that we talk about his background and when/where he lived to more accurately describe his mindset.

Don't use plagiarized sources. Get your custom essay on
“ John Stuart Mill’s Viewpoint on Interrogation and Torture ”
Get custom paper
NEW! smart matching with writer

John Stuart Mill was a British philosopher who was born in Pentonville, London, England in 1806 and died in France in 1973. John Stuart Mill was the eldest son of a Scottish philosopher James Mill and had a very rigorous upbringing shielded from peers from his own age studying the ins and outs of philosophy. His father’s goal as a follower of Jeremy Bentham was to create a genius intellect to carry on Utilitarianism after he and Bentham died.

The intensive study his father put him through caused severe mental health issues on John Stuart Mill causing him to have a mental breakdown at age 20 which he claimed to be caused by the great physical and mental demands that suppressed any feelings he should have developed in his early childhood.

John Stuart Mill as a Utilitarian philosopher, which is a form of teleological (goal based ethics) / consequentialism (moral worth of an action is determined by its outcome), believed that ethical/moral decisions or actions should be made on the basis of the greatest good for the greatest number.

That meaning maximizing pleasure, satisfaction and well being while minimizing negative affluences commonly referred to as ultimate importance. Utilitarianism can also be compared with deontological ethics, which do not take in the consequences of the account being a determination. John Stuart Mill’s rule Utilitarianism is much more relative then “text book” Utilitarianism in which he encouraged people to do acts that are pleasurable to them as long as they do so to the “higher pleasure”. Although his definition of higher pleasure can be questioned as an absolutist since he is absolute in what he defines as “higher pleasure.” Now begs the question; what would his opinion be on enhanced interrogation techniques or torture on terrorists in US custody be? After the 9/11 attacks and the United States war on Iraq in the media non-stop over the last decade we here much of terrorists in US custody in places such as Guantanamo Bay being interrogated and tortured for information.

It can be concluded from an Utilitarian standpoint that these individuals are less than one percent of the US & World population and if anything can be done to these individuals to benefit or protect the rest it would be justifiable by any means. Thus, it is obvious that John Stuart Mill would whole-heartedly agree with these actions and more than likely encourage it. I agree with Utilitarianism and John Stuart Mill on the viewpoint of interrogating or torturing actual terrorists to protect United States soil but unfortunately the term “terrorist” for the United States is loosely defined and anyone disagreeing with United States policies can be defined one way or the other as a terrorist. I disagree with Utilitarianism as a whole because there is an obvious flaw with an individual’s interest vs a greater sum of lesser interests meaning that the legal system would punish behavior that harmed others but that would not punish in a situation where one can personally gain and no one would be harmed.

Also one person could propose something would would maximize self-interest that conflict with means supported by another. Thus, self interest causes them to compromise with another to avoid interference; the means advised may accidently correspond with those by utilitarianism but the fundamental ethical imperative would not be utilitarian. Utilitarianism itself is somewhat a paradox when it comes to actual real life use but sounds wonderful in theory if the world was really black and what / end all be all but of course as we know it is not. John Stuart Mill would of course agree with enhanced interrogation techniques or torture but his utilitarianism justification would never be accepted by the United States masses. 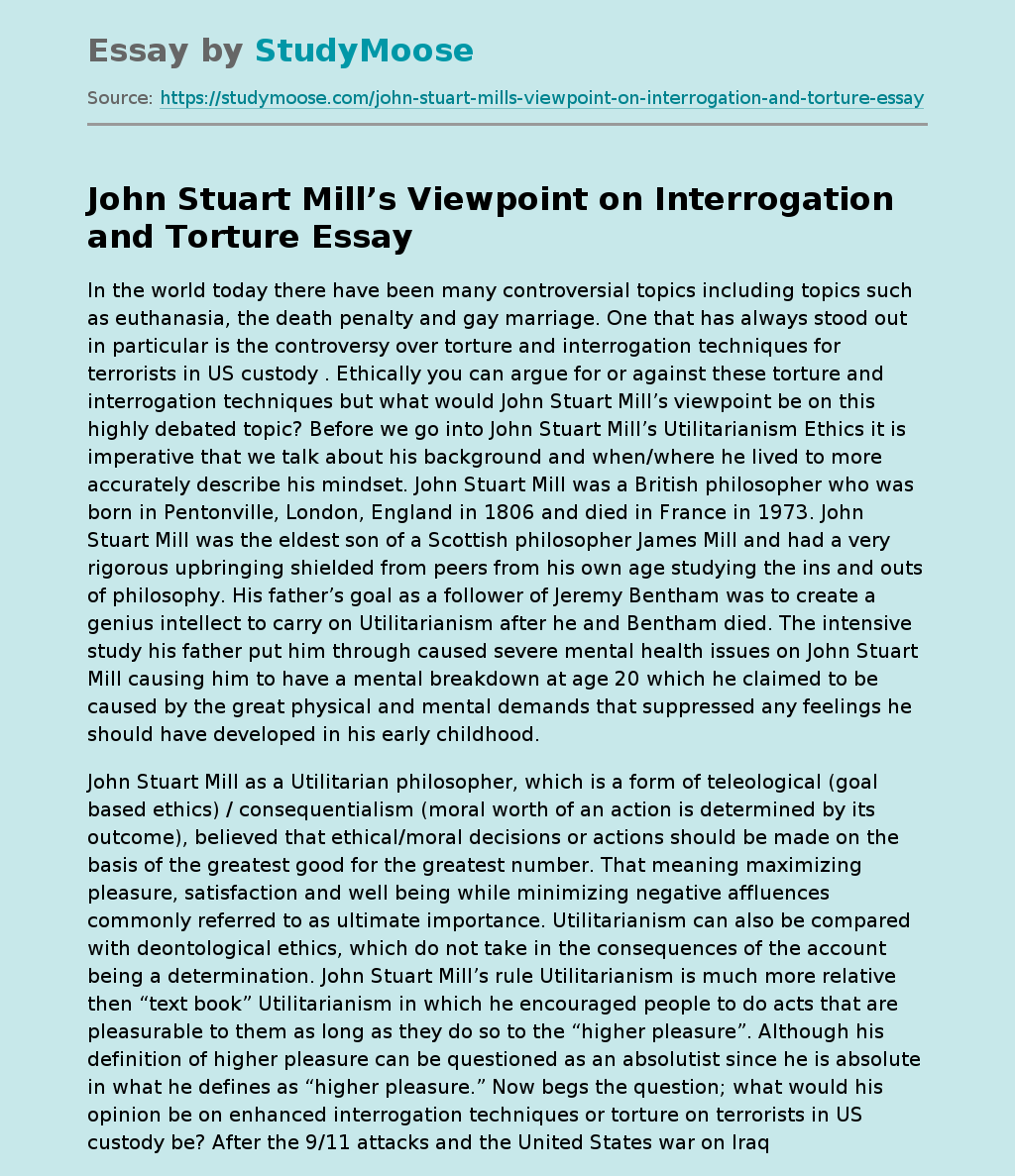