He responds to this by noting that if a person’s actions are “self regarding” (i. e. drinking excessive alcohol,) then they affect only oneself. However if this conduct disables them from performing their public duty or societal role than it can no longer be considered self-regarding action, and as a result, society ca legitimately intervene; “No person ought to be punished simply for being drunk; but a soldier or a policeman should be punished for being drunk on duty.

Whenever, in short, there is a definite damage, or a definite risk of damage, either to the individual or to the public, the case is taken out of the province of liberty and placed in that of morality or law,” (76).

Don't use plagiarized sources. Get your custom essay on
“ Mill’s Harm Principle ”
Get custom paper
NEW! smart matching with writer

Although Mill seems to firmly believe that it would be an unjustified use of power for the government to prohibit intoxication based on a presumption that a drunken person might cause harm to others, he does accept that if an inebriated person does harm another person once, then the government should rightfully prohibit that person from becoming inebriated again in the future.

“Drunkenness,” Mill explains, “in ordinary cases, is not a fit subject for legislative interference; but I should deem it perfectly legitimate that a person, who had once been convicted of any act of violence to others under the influence of drink, should be placed under a special legal restriction, personal to himself; that if he were afterwards found drunk, he should be liable to a penalty…. The making himself drunk, in a person whom drunkenness excites to do harm to others, is a crime against others” (90).

Once a private action violates the Harm Principle, Mill supports the use of collective control and coercion.

On Liberty even takes into consideration whether the government could legitimately regulate pubs where alcohol is predominantly being served. In regards to this, Mill concludes that, because public harms associated with drunkenness are more likely to occur in or near such establishments (at least in comparison to other social places), the government may instill regulations on them. Examples of justifiable intervention would be setting closing times and restricting operating licenses to “persons of known or vouched-for respectability” (94).

Any other restrictions, however, including setting a limit on how many pubs may exist in any given area, would be liberty encroaching. Such a limit “for the express purpose of rendering them more difficult of access, and diminishing the occasions of temptation, not only exposes all to an inconvenience … but is suited only to a state of society in which the laboring classes are avowedly treated as children or savages” (94). Finally, Mill discusses taxation on alcohol, and how it can be legitimately be applied.

He starts be acknowledging that inebriation is a “social act,” because, if nothing else, it involves a consumer and a producer. He also notes that the underlying goal of the laws that prohibit sales of alcohol is to discourage the use of alcohol; “The infringement complained of is not on the liberty of the seller,” notes Mill, “but on that of the buyer and consumer: since the states might just as well forbid him to drink wine as purposely make it impossible to obtain it,” (83). He is not willing to accept “trade laws,” as he feels they are nothing more than disguised prohibition laws.

Similarly, he seems equally skeptical of “sin taxes,” which inflate the price of a product for no obvious reason other than to deter citizens from its use. Such a tax, he asserts, “is a prohibition, to those whose means do not come up to the augmented price; and to those who do, it is a penalty laid on them for gratifying a particular taste,” (93). A person’s choice of pleasures, in Mill’s opinion, should be established by the judgment and reason of that individual. Mill does accept a special tax on products such as alcohol, but only to the extent that it means increased revenue for the government.

Furthermore, Mill explains that a “sin tax” may result in decreased revenues from taxation on alcohol if they are successful in dissuading a percentage of the population from consuming it. John Stuart Mill is a self-proclaimed utilitarian. In Chapter 1 of On Liberty he claims to accept, as the ultimate ethical standard maximized utility centered in the foundational interest of man as a forward evolving species. In Chapters 2 and 3 he seems to be an advocate of freedom for the individual in thought, expression and living, with an emphasis put on the importance of autonomy and individuality as elements of well-being.

Then how, as a purveyor of utilitarian beliefs, can Mill accept these restrictions which may directly interfere with the happiness of considerable portions of the citizenry? The answer is slightly complicated, and will become the topic of focus for the rest of this essay. As has been previously discussed, Mill rejects the assumption that the individual is inherently attached to all of society. Therefore he does not believe that harm to the individual can be considered harm to society. Collective coercion (i. e. laws governing alcohol sales, punishments for drunken action, etc.

) is permissible only to prevent harm to others. Society cannot justifiably interfere to prevent harm to self, or to ennoble, elevate or perfect peoples lives. This rejection of perfectionism and paternalism initially seems based on a claim that such action would be in violation of liberty, regardless of whether or not they are effective. This seems to be in direct conflict with utilitarianism, as regulating potential negative action may promote the most amount of happiness amongst others. In their very foundations the Harm Principle and utilitarian precepts seem to clash.

Instead it seems that Mill has adopted the usage of the idea of the abstract right. At the focal point of Mill’s thought is the idea that some restrictions (i. e. the prohibition of alcohol to some) are congenitally wrong in principle, in despite of any effects they may have on generalized well-being. This is resultant of an inequitable distribution of burden placed on individuals within society as a result of government intervention. A person who does not drink, but does not condemn drunkenness, does not feel any suppression of desires because of the laws, and therefore endures less of a burden.

A person who is anti-alcohol consumption will become happier because of prohibition. But a person who has never, or would never, act in opposition to the Harm Principle, but enjoys alcohol as a private pleasure is burdened heavily. Mill’s paramount theme, then, is that regardless of possible increases in utility, government or collective societal impositions on individual liberty which coincides with the Harm Principle, are intrinsically wrong. Classifying On Liberty as decidedly utilitarian in scope would therefore be inaccurate.

In his analysis, Mill overlooks an important facet of the prohibition discussion; arguments for the restriction of alcohol based on the goal of promoting utility and individuality. The idea of the abstract right, and some of the defenses Mill employs to defend minimal restrictions on alcohol sales can be used alternatively to defend the pro-prohibition cause. Mill concedes that inebriation in some cases does in fact lead to harm. It must then be considered who is being harmed. The family of a victim of a drunk driving accident experiences far more grief/burden than a family who has not been exposed to the horror of alcohol-related losses.

This is a symmetrical argument to unequal distribution of burden caused by oppression. Because some members of society experience major harm resultant from the consumption of alcohol, it can be argued that, in their interests, this type of harm should be prevented at all costs. Mill’s failure to address the well-being and utility that may be gained or lost from avoided harm and misplaced burden detract from the entirety of his essay. 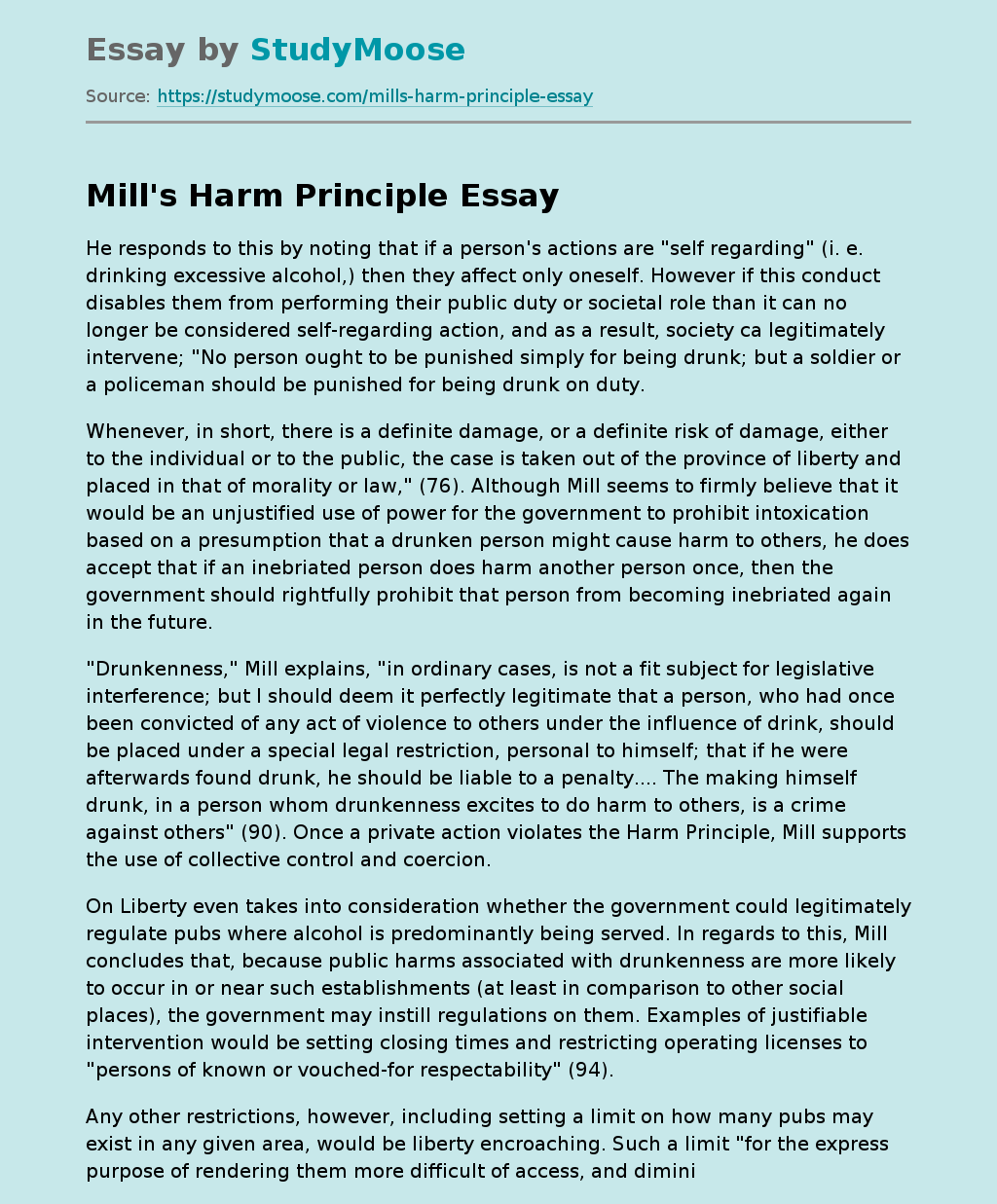