John Stuart Mill’s Utilitarian Philosophy came to be known as the greatest happiness principle. It begs the question; what is happiness? Mill thought that the purpose is life is for the experience of pleasure and freedom from pain and that every action must be measured against this paradigm. Yet just like any other perspectives, Mill’s utilitarianism encounters criticism, one of which focuses on the meaning and realization of happiness. Mill however, conscious of the critique implied in his foundation of morality that humans are higher beings than animals or any other species, therefore have higher faculties and appetites.

From this standpoint, the argument that men might choose actions that are irrelevant or offensive to other people in the light of satisfaction is rebuked. The source of pleasure and content of the swine could never be the same as that of a human. There is a given superiority of the mental pleasure over bodily ones among utilitarians, and this he maintains.

Any act of men which rightly makes him a lower class of being is assumed to be avoided by the latter, as he would not allow himself to shrink into a lower kind of person or being that he is.

He attributes this to a sense of pride, or the love of liberty and independence and dignity which he believes, every man possesses in one form or another. Apart from his notion of human domination over other living things, he nonetheless admits that men are capable of choosing and doing bodily pleasures that may be treated less valuable than another. This is true in instances when men have preferred alcoholism despite the knowledge of its negative repercussions in exchange for men’s bodily pleasures derived from the activity.

He contests ergo that such incapacity for the nobler feelings is due to the nature of the latter, like a tender plant that is easily killed by hostile influences especially among the young people when the environment is not favorable to keeping that higher capacity in existence. This idea is perhaps a noble addition to the claims of utilitarianism: “…the happiness which forms the utilitarian standard of what is right in conduct is not the agent’s own happiness but that of all concerned…”

This makes the values of utilitarianism compatible to other religious norms which states, “To do as you would be done by” and “To love your neighbor as yourself”. Hence, an important policy suggestion emerges in the fulfillment of utilitarian morality code; that laws and social structures must institute ways to make the interest of every individual one and the same as that of the whole; and that the association of one person to the happiness of the others must be realized through the utilization of the power which education and opinion embody.

In the end, a few lessons have been learnt from Mill; the notion of the universal happiness; the possibility of harmony of interests; and then necessity of policies for the success of his scheme. The same flow of arguments run in Mill’s speech in 1868 in favor of capital punishment. To him, the punishment by death is most desirable for a person who committed heinous crimes such as murder unless there is a probability that the action was undertaken due to factors outside of the character of the individual.

He also looks into the essence of conviction in the community relevant to his, “practical power depends far less on what it is than on what it seems”. He counters the amendment of capital punishment and the transition to lifetime imprisonment as he believes the former is more effective in the light of preventing the innocent from indulging in similar crimes. What seems to the public a dreadful death accrued in capital punishment is for Mill less important than the implementation of his penal justice which seeks to “deter by suffering from inflicting suffering”.

John Stuart Mill’s principle in the final analysis have contributed much to our understanding of man’s greatest happiness, a justification to existing laws and the value of education. 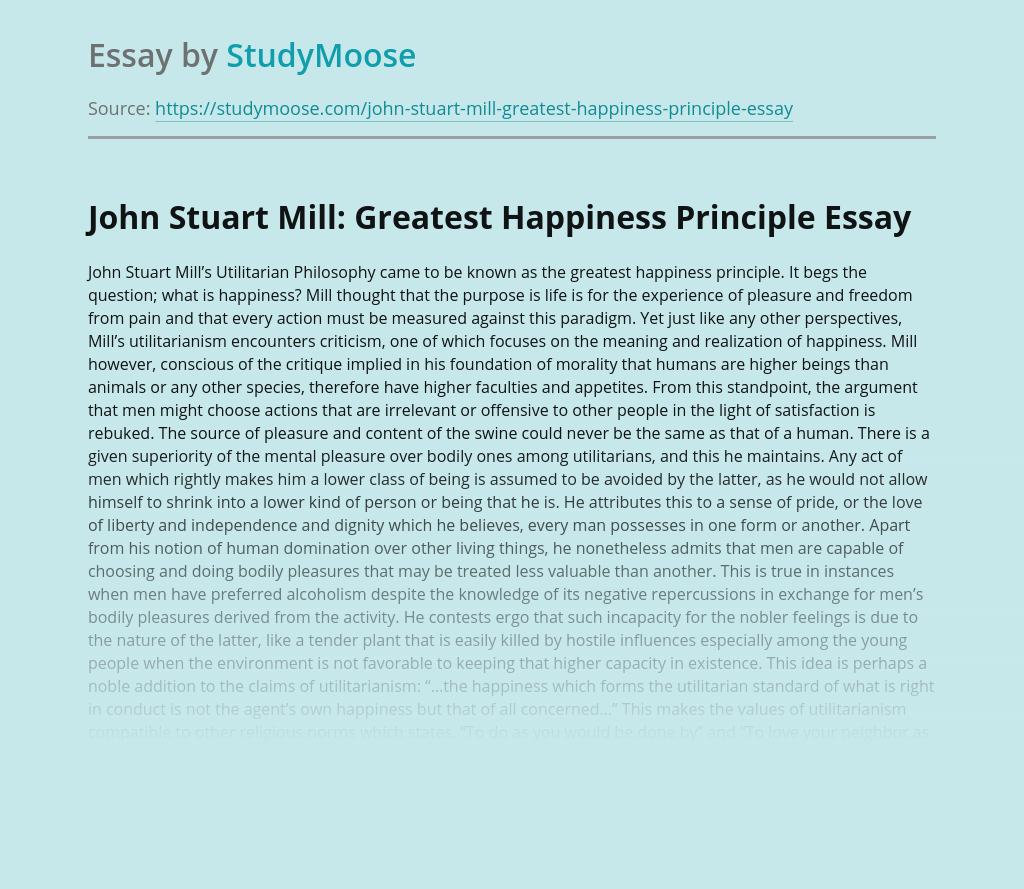 Throughout Unit 3, I have been exploring the themes of summer and how it causes girls to feel vulnerable and self conscious but also how it allows girls to feel carefree and relaxed. The following potential directions are for my two artworks for Unit 4, the first artwork being a collection of 2D works and...

World War II was a time of great social turmoil in the United States, not only because of its active role in the war, but also because of the radical changes taking place in society. As an effect of the Jim Crow laws, people were beginning to speak up against segregation and demand equal rights....

Question 1: How would you characterize Wal-Mart’s approach to global management? The trademark of Wal-Mart’s global management approach focuses on 3 main strategies: low price, best value, large selection of goods & high quality service. Being the world’s largest retailer, Wal-Mart will enter the international market by providing a wide variety of products at a...

“Something I don’t understand what it was. It wasn’t genuine.” “It’s strange, the lack of feeling, the absence of drama in truth. When things happen in reality, extraordinary things, there’s no music, there’s no dah-dah-daaahhs. There’s no close-ups. No dramatic electronic camera angles. Nothing occurs. Nothing stops, the remainder of the world goes on.” “Truth....

In the history of the American civil rights movement, two seminal figures emerge: that of the peaceful and nonviolent Martin Luther King, Jr., and the revolutionary and radical Malcolm X. From these two contrasting images, America did not know how exactly to classify the movement. On one hand, Malcolm X preached independence and a “by...