The Re-Denley Principle and Beneficiary Principle

A trust is created by a settlor or a grantor, transferring property to a trustee to hold in trust for stipulated purposes and may be created inter vivos or on death by will[1]. This implies that a trust is formed when a person transfers a property or rights to another person who holds it for a third party. There are many reasons why trusts are created. The most common reason is where the intended beneficiary of a right is not capable of holding it at a given point in time.

Don't use plagiarized sources. Get your custom essay on
“ The Re-Denley Principle and Beneficiary Principle ”
Get custom paper
NEW! smart matching with writer

An example of this is where the beneficiary is a minor.

Legally, a trust is not valid until there is a beneficiary.

In other words, because a trust imposes an obligation on the trustee, there is the need to identify a person for whom the trustee is to hold the property otherwise the arrangement cannot be seen as a trust.

This obligation is one that can only be enforced if there is an identifiable beneficiary for the trust.

In Re Astor[4], it was held that a trust for the preservation of an independent newspaper was void because there were no human beneficiaries identified in the trust. This therefore lays precedence for the fact that every trust must have an identifiable beneficiary for whom the trust is being established. Other than that, the trust cannot be recognised as legal.

However, the ruling of Re-Denley established a separate set of precedence that seems to contradict the beneficiary principle. In Re-Denley, the ruling was that a trust can be valid if there is some person or a group of persons who could be reasonably assumed to be capable of enforcing the rights to the trust in court[5].

In other words, a trust might be legally binding if a class of beneficiary could be reasonably inferred by examining the circumstances. This therefore means that on the basis of the ruling form Re-Denley, an arrangement without a clearly specified human beneficiary could be classified as a trust if certain conditions are met.

In Re-Denley, the main point of legal conflict was based on the fact at sports facility was to be held in trust for the employees of an organisation. It was argued in the case, that the employees were not a defined group of people and the trust was therefore void under law. The ruling of Justice Goff was as follows:

“No distinction in principle between a trust to permit a class defined by reference to employment to use and enjoy land in accordance with rules to be made at the discretion of trustees on one hand and on the other hand, a trust to distribute trustee’s income at the discretion of the trustee among a class defined by reference to for example the relationship to the settlor”[6]

This therefore means that a trust can be legal if there is a defined class of individuals who can benefit from the property if it can be inferred from the instructions of the grantor or settlor. In other words, this ruling showed that it is not always required for the settlor of a trust to clearly define and specify the human beneficiary of a trust to make it valid. It shows that there can be situations and conditions where the settlor’s broad definition of a group of people as beneficiaries could be sufficient to create a trust.

The default common law position is that a trust created for a purpose which has a defined human beneficiary as per Re-Astor [1952]. In Re-Denley however, a trust was held for a purpose and the beneficiaries were loosely identified to be the employees which did not have a fully certain definition of a human being.

The Re-Denley principle is an exception to the beneficiary principle and the courts uphold it because there are individuals with locus standi who can apply to have the purpose of the trust carried out[7].

The reason why the Re-Denley principle is seen as an exception to the beneficiary principle is that a potential group that has a locus standi under the trust law are technically not beneficiaries. This is because they are not specifically individuals in whose name the trust was created. However, the fact that they can come up and seek the enforcement of the trust makes the arrangement a legally accepted trust because they have the technical rights of beneficiaries and thus the trust is not void.

The existence of a group that have the locus standi to enforce a trust eliminates the abstract and personal nature of the arrangement as required by law for the formation of trusts laid down from Morice V Bishop of Durham [1805].

However, in the case of Re-Denley, although the beneficiaries were not expressly stated in the agreement, there was a logical inference that the group of employees, identified by the settlor as beneficiaries had the right to enforce the trust in court and thus, the arrangement was valid and was considered wholly as a trust.

The Re-Denley principle therefore creates a non-charitable purpose trust which does not benefit a particular human being or a charitable purpose. Rather, it creates a benefit for a purpose for a stated group of people who can be reasonably identified by way of their right to enforce the trust in court.

The principle is that a gift for non-charitable purposes is enforceable if an ascertainable group of people can benefit substantially from the purpose defined in the trust. In spite of the fact that Re-Denley seems to conflict with the beneficiary principle, it has some limitations that it needs to comply with to be considered as legally binding and acceptable under the laws of trusts. First of all, the settlor must define the group of people who can potentially enforce the trust. Secondly, the group must be clearly defined and not just a vague and abstract set of people.

Additionally, a non-charitable purpose trust is limited to the point of time and it must not infringe on the principles of perpetuity. In other words, an agreement must have a defined timeline to be considered as a Re-Denley trust or a non-charitable purpose trust. It must terminate under a specified date like all the other trusts that adhere to the beneficiary principle.

Thus in effect, the Re-Denley principle seeks to replace the beneficiary principle to an enforcer principle whereby English Law has accepted that the existence of a group people who can enforce the principle is sufficient for the creation of a trust.

In conclusion, the original position of English Law in relation to trust was one where there was a beneficiary for which the trustee was to hold the property. Such an individual was to be specified and the terms of the trust was also to be specified in clear terms. In landmark cases, the beneficiary was supposed to be an identifiable human being or group of human beings. However, the Re-Denley case created a precedence whereby it was sufficient for the creation of a non-charitable purpose trust once there was an identifiable enforcer. So the Re-Denley principle sought to change the beneficiary principle to an enforcer principle.

Reasons to Retain the Beneficiary Principles

From the landmark ruling of Morice V Bishop of Durham, the Judge observed that there must be someone in whose favour the court can decree performance[8] English law therefore makes it imperative for every trust to have an identifiable person or persons for whom the trust is set up or at least to enforce it. Without such a person, a trust is void.

A person can use his property directly in his lifetime for any legal purpose. Finding a trustee to do so for such an individual in his lifetime is a recipe for mischief. This is because many people can hide behind trusts to execute their personal activities as third parties and gain unfair and illegal advantage over others. Areas prone to this mischief include tax evasion and criminal activities.

Such mischief also puts the trustee in reputational dangers. This is because that the trustee could also be considered as an accessory if a crime is committed through a personal trust. Thus the beneficiary principle potentially prevents individuals from exploiting society by creating trusts for themselves. So the beneficiary principle makes it necessary for trusts to be created only for third party beneficiaries and not for either the trustee or the settlor. Such arrangements need to be classified under other legal arrangements to ensure that their substance is brought to bear.

However, aside its common law role of creating a strong case against people abusing trusts, the beneficiary principle has been challenged on so many equitable grounds which has seen the formation of non-charitable purpose trusts as stated in Re-Denley. This therefore presents the beneficiary principle as quite onerous and not so friendly in terms of promoting justice.

Although the enforcer principle seek to cancel the beneficiary principle and replace it with a less stringent requirement, I think that the beneficiary principle is gradually losing its legal worth. This is because most people who seek to commit mischief like tax avoidance/evasion can now form trusts without beneficiaries but with some kind of enforcers which allows them to get away with massive tax avoidance which is comparable with tax evasions through offshore accounts[9].

This therefore means that in practice the beneficiary principle is no more able to achieve the end it sought to achieve by preventing people from creating trusts that will benefit them. However, scraping off the beneficiary principle directly will mean legalising the idea of creating non-charitable purpose trusts for mischief. This is unacceptable and would cause a lot of people to abuse trusts for such purposes.

The Re-Denley Principle and Beneficiary Principle. (2016, Dec 26). Retrieved from http://studymoose.com/the-re-denley-principle-and-beneficiary-principle-essay 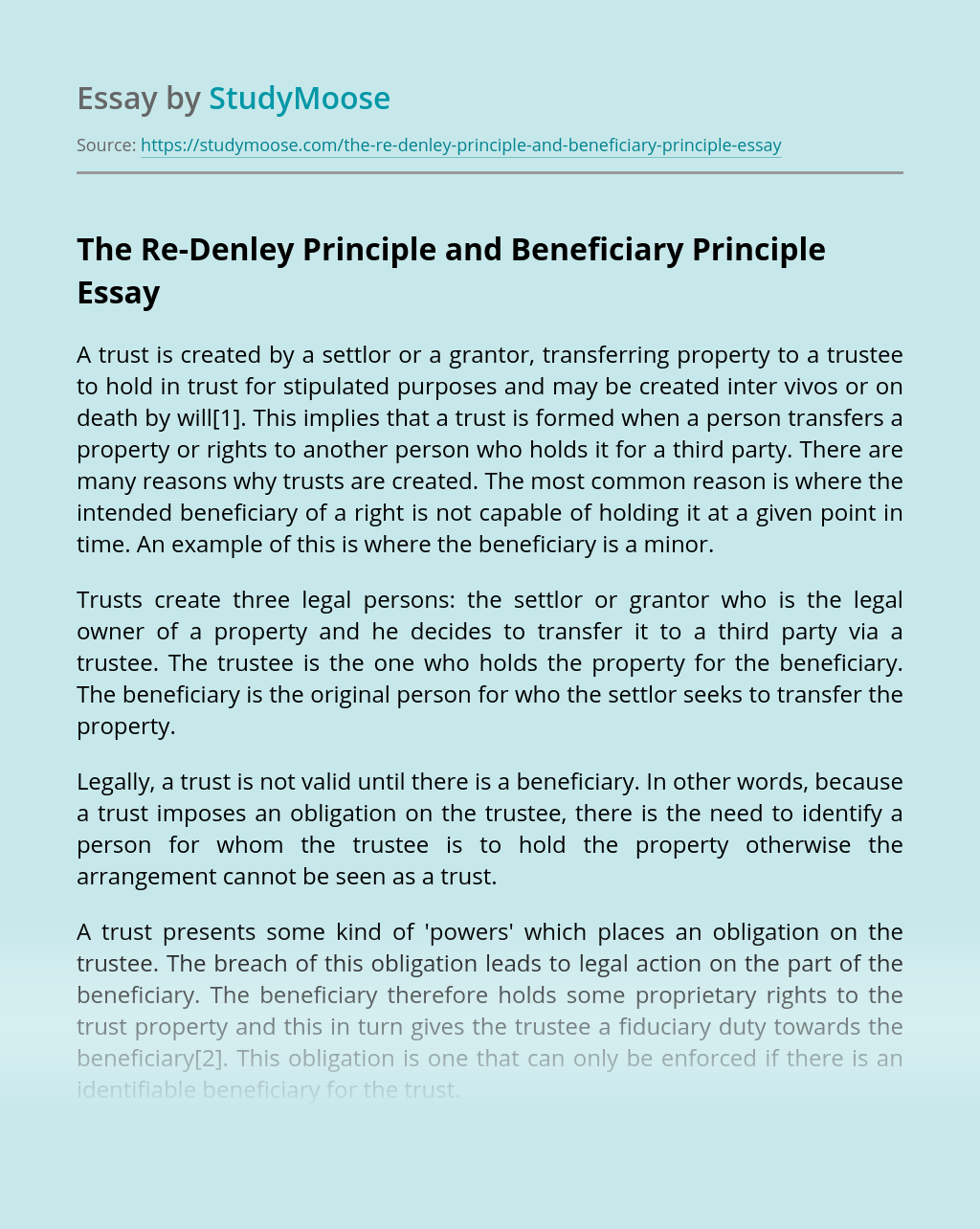