The Principle of Double Effect

A situation in which an action must be performed to achieve a good, but as a result of achieving that good, a bad is also achieved, would be cause to make use of the PDE.

Don't use plagiarized sources. Get your custom essay on
“ The Principle of Double Effect ”
Get custom paper
NEW! smart matching with writer

The PDE is basically a morality barometer—yes, this effect is bad, but how bad is it really when taking this good into consideration. The PDE strives to determine whether an action full of gray moral area is ultimately morally permissible, and it does so by judging the action through a number of set criteria.

These criteria are, in brief, as follows: (1) The act in itself is morally permissible; (2) The good effect from the act cannot be achieved without the bad effect occurring as well; (3) The bad effect is merely a side effect, and not the means through which the good effect is achieved; (4) The good and bad effects are both equally balanced in importance (Harris, 71).

In order for the action to be considered morally permissible, all four criteria must be fully met. Take, for example, the story of Mary and her ectopic pregnancy.

Mary and her husband are practicing Catholics, and as such they have very strong beliefs against abortion and do not want to do anything that would go against the Church.

However, regardless of the course of treatment chosen, Mary’s baby is lost, so this element should automatically be discounted as a determining factor. This in itself is a gray area. The four choices of treatment that Mary is given all have their own set of risks—some have higher risks to her, the mother; others have risks to the future of Mary’s and her husband’s efforts to have another child; all ultimately mean the termination of her pregnancy.

Mary’s options include waiting for the egg to pass naturally, which poses a high risk to her the more time passes; taking a drug to thin the egg and force it to pass on its own; one surgery with a risk of making conceiving difficult in the future as well as the common surgical risks to Mary, and another surgery with less risk of complications in the future but also with the common risks of surgery. Because the pregnancy is lost regardless, I would advise Mary on deciding on a course of treatment as quickly as possible, because it is morally right to save oneself.

She has already agreed to get treatment, given that the treatment doesn’t violate the Church’s teachings and that she can still bear children in the future. Because of the different levels of risks involved with each procedure, I would recommend the drug therapy. Both surgeries are risky due to the fact that they are surgeries, and the one is even riskier because it can lead to complications in Mary getting pregnant later.

The option to let it pass naturally is probably more in line with the Church’s teachings, but it puts Mary at too great a risk and the pregnancy can’t be saved anyway. I would be loathe to think that any Church would encourage waiting it out so as not to be actually physically performing an abortion, when it is a given that the embryo will die regardless. Unfortunately, taking the drug treatment does not fully satisfy the criteria of the PDE: first, the act itself of a woman taking a drug to save her life is morally permissible.

However, it is not necessary that she receive this treatment (or any other, for that matter) in order to survive. She can still survive without treatment; it’s just that the risks of her not surviving (or causing damage to her fallopian tube) is greater—note, NOT imminent. Second, there is no way for the good effect (saving Mary’s life) can be achieved without the bad effect (the embryo being killed)—especially when considering that the embryo is dead regardless.

This bad effect is unavoidable because if she waits to pass the embryo on her own, she could die too. Third, and this is where the treatment fails to satisfy the PDF criteria, the bad effect is the means of achieving the good effect. The “abortion,” for what it’s worth, is the only way to guarantee Mary’s life will be saved—and that goes for the drug treatment as well as both surgical options. The fourth criteria is, however, satisfied because the death of the embryo—again, especially considering it will die regardless—balances saving Mary’s life.

Based on the third criteria of the PDE, the only morally permissible way to “treat” this problem is to wait for the embryo to pass through the fallopian tube naturally, putting Mary at the greatest risk. All other options, despite how ridiculous it might be to even be referring to this as an “abortion,” especially considering the embryo will die regardless, require that the abortion, for what it is, must be performed in order to reduce the risk to Mary’s life. Therefore, no treatment is morally permissible and Mary has to take her chances.

The Principle of Double Effect. (2017, Mar 09). Retrieved from http://studymoose.com/the-principle-of-double-effect-essay 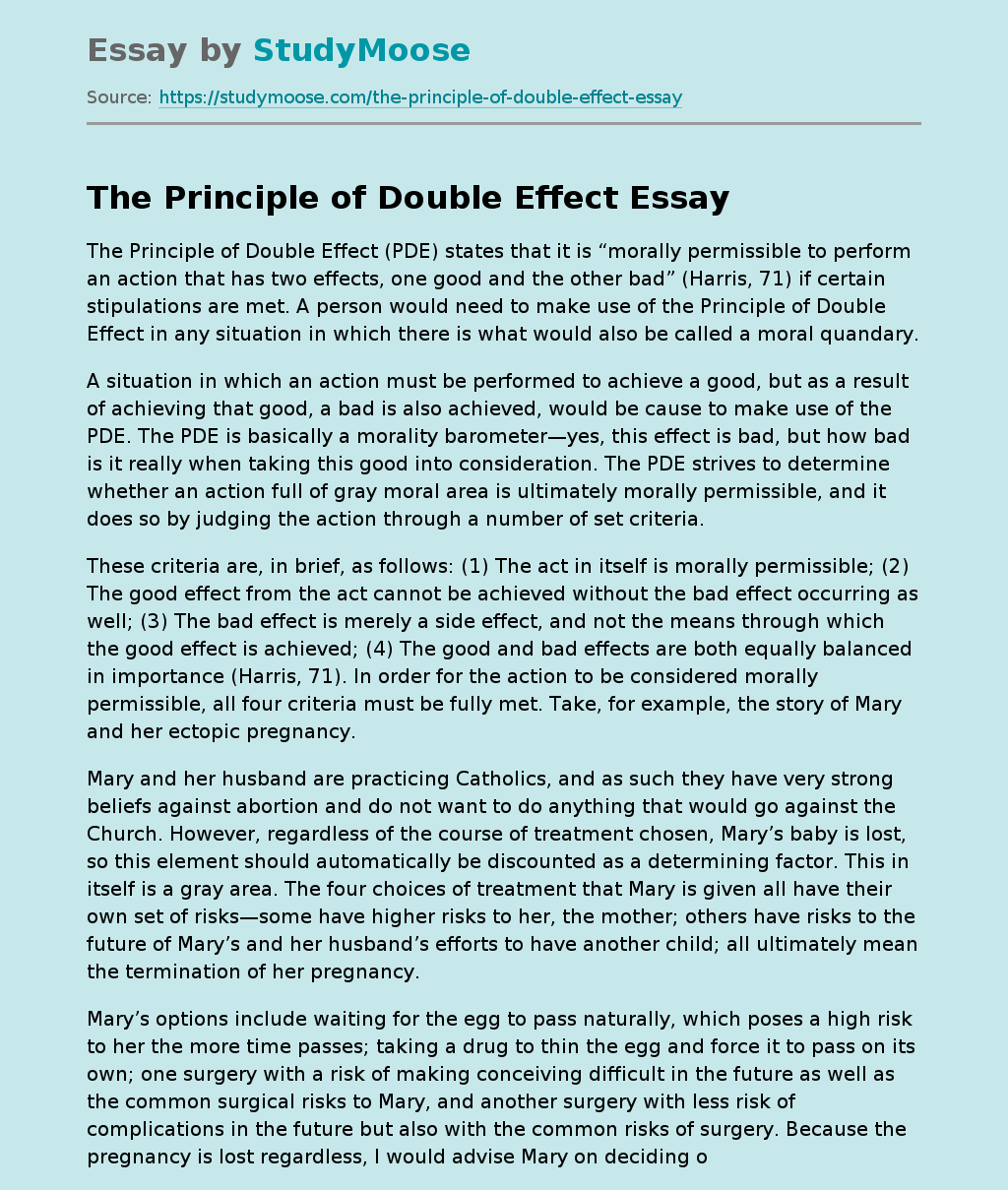