An Analysis of Dominant Themes in Double Indemnity

Billy Wilder’s Double Indemnity is a Hollywood classic of the femme fatale genre. The movie employs the ingredients of film noir, such as blind lighting and voice over narration, which have been emulated in the noir circles- but none of the subsequent movies come close to Wilder’s masterpiece. Another highlight of the movie is the dialogue that is charged with the overtly aggressive sexual undertones- a characteristic of Raymond Chandler, who is credited for the screenplay.

Although the movie is an adaptation of James M.

Don't use plagiarized sources. Get your custom essay on
“ An Analysis of Dominant Themes in Double Indemnity ”
Get custom paper
NEW! smart matching with writer

Cain’s sensational novel- Three of a Kind, it is actually based on a real life story of Ruth Snyder, a New York housewife, who plotted to kill her husband with the help of her 32 year old lover, Judd Gray. She wanted to inherit a $48000 insurance policy cover of her husband. Their plan was however discovered, due to poor planning and their obvious lack of experience in criminal enterprise. They were subsequently sentenced to death.

In the same vein, Walter Neff, a sales agent of the Pacific All Risk Insurance Co., accidentally meets Phyllis Dietrichson, his client’s wife and immediately succumbs to her seductive charms. As their relationship develops to a romantic one, Phyllis reveals her plan to kill her husband in order to claim the proceeds of an accident insurance policy that he is covered under. Walter comes up with a plan that will ensure she gets twice the proceeds based on a double indemnity clause.

Everything goes as planned. They successfully murder Mr.

Dietrichson and dump his body on a rail track. The police brush it off as an accidental death. While the two lovebirds are able to fool everyone, Barton Keyes, the claims manager and Walter’s close friend does not believe the death is accidental. His instincts show him that Phyllis, with the help of a man, is responsible for her husband’s death. Things get complicated when Phyllis tries to kill Walter. He manages to snatch the gun from her and eventually kills her. Bleeding from the single gunshot fired by Phyllis, he drives to the office, where he makes a full-blown confession to Keyes.

One of the recurring themes in Double Indemnity is objectification of women. This theme is highlighted by Phyllis Dietrichson (Barbara Stanwyck), an alluring beautiful blonde woman that is the object of male fantasies in the movie. She is aware of the power she wields over men and uses it to get whatever she wants. Her alluring beauty is what makes Mr. Dietrichson marry her, despite being the same age as his daughter, Lola. He is blinded by her charming nature and ignores the fact that his wife dies mysteriously under Phyllis’ watch.

The problem with objectification is that one is never looked at past his/her physical beauty. This is what happens to Phyllis. Her husband has no respect for her. He treats her like his property, rather than his companion, which leads her to loathe him. Mr. Dietrichson puts her daughter, Lola’s interests above everything else, including his wife’s. He makes it a priority to live all his wealth to Lola, including his insurance cover. In this arrangement, Phyllis is entitled to nothing from her husband.

Another victim of her charm is Walter Neff (Fred McMurray), an insurance salesman. “I wanted to see her again, close and without that silly staircase between us,” Walter confesses after he sees her for the first time. When she opens up about her woes with her husband, Walter devises a plan to execute Mr. Dietrichson, whom he sees as a competitor. Walter is a representation of the depths that man is willing go to win whatever he wants. Due to his blindness, he does not realize that Phyllis is using him to achieve her goal.

The first instance of betrayal occurs when Phyllis decides to murder Mr. Dietrichson’s wife to win her husband. She betrays her Hippocratic Oath as a nurse to safeguard the lives of her patients, without prejudice or favor. She also betrays her marital vows by engaging in extra marital affair with Walter and subsequently murdering her husband.

Mr. Dietrichson betrays his first wife by marrying a woman who is responsible for her death. Though he does not want to acknowledge it, his wife dies mysteriously under the watch of the beautiful nurse, Phyllis- a fact that even his young daughter is able to see. Furthermore, he does not cater to his second wife, which leads to her discontentment and her eventual plan to kill him. He openly neglects her needs and does not care about her wellbeing when he dies.

Walter is also a character that displays the theme of betrayal. By engaging in extra marital affairs with Phyllis and helping her kill her husband, Walter betrays both his professional ethics and his moral obligation as a human being not to infringe on the rights of others. Ironically, he is betrayed by the person he vehemently pursues throughout the movie.

Greed is what motivates Phyllis to kill her husband. She does want to accept the fact that Mr. Dietrichson does not owe her anything. She however wants everything at the expense of her stepdaughter. It is due to her greed and selfish nature that she turns on Walter and unsuccessfully tries to kill him. Her greed to keep all the money blinds her from the fact that it is Walter who plays a pivotal role in the execution of the plan and without him, she would still be an unhappy housewife, without any prospects of a materially secure life.

Phyllis’ character clearly reveals that all that glitters is not gold. All the men that are entangled in her web of lies, learn of her treachery when it is too late and ultimately lose their lives. What was initially her biggest asset, turns out to be her biggest liability, when the men in her life look past her beauty and discover who she really is.

An Analysis of Dominant Themes in Double Indemnity. (2018, May 07). Retrieved from https://studymoose.com/an-analysis-of-dominant-themes-in-double-indemnity-essay 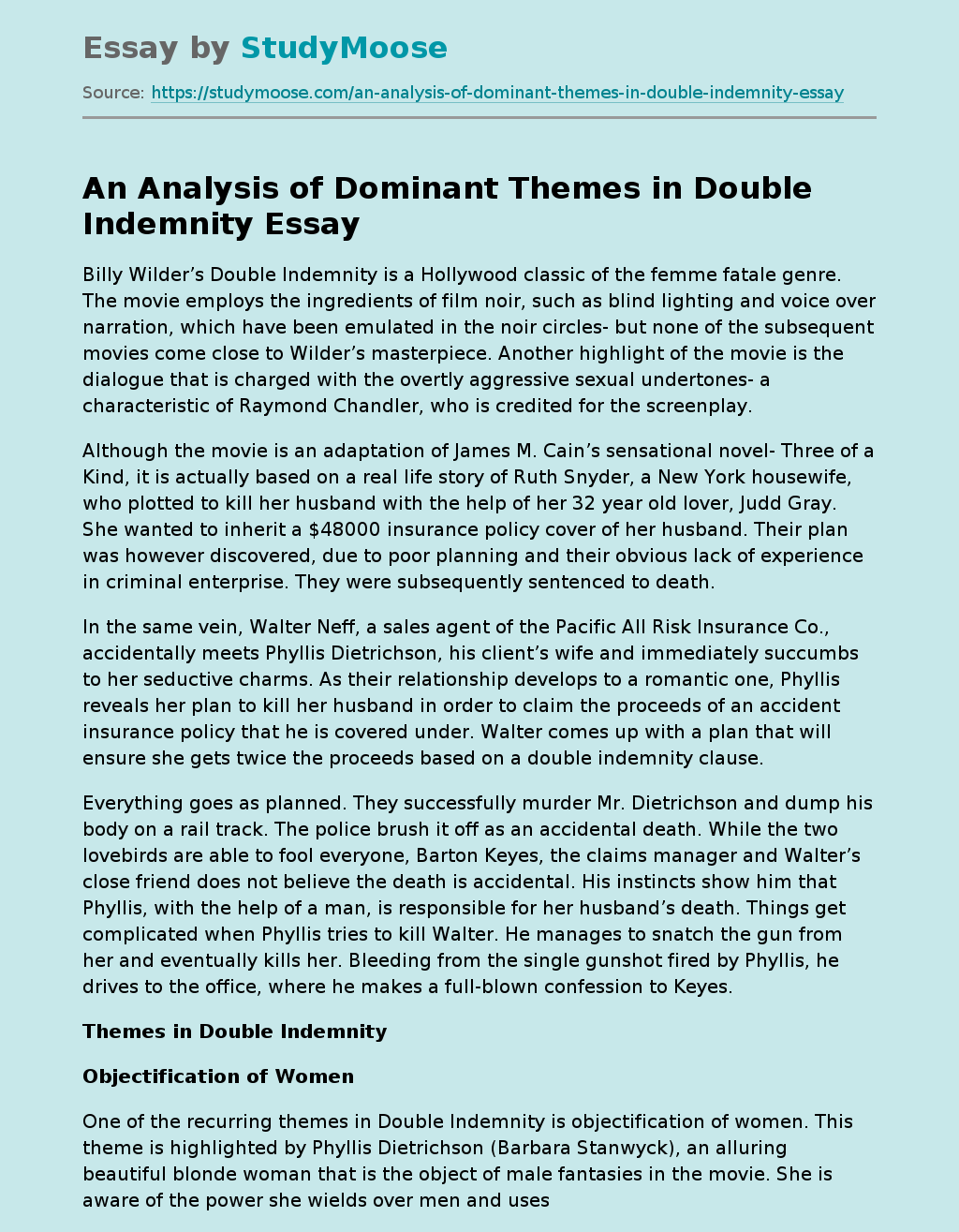