Technology as a double-edged weapon

We live in a generation that relies heavily on technology and on the Internet. People spend much time online on the Web, whether for work, school or University homework, for fun or just for social networking. So, for this main reason this issue of excessive use of technology and the Internet is a topic of great interest for all of us. That’s why we decided to do our research project related and based on the different types of websites that are of main interest for the people.

First of all, we will start talking a little bit about the technology and the Internet in general. When we look at any dictionary for the definition of technology they define it as: “the branch of knowledge that deals with the creation and use of technical means and their interrelation with life, society, and the environment, drawing upon industry such subjects as arts, engineering, applied science , and pure science … “, and definitely, that is it.

Over the years, we have seen the evolution of technology. Technology and Global Change describes how technology has shaped society and the environment over the last 200 years.

Technology has led us from the farm to the factory to the internet, and the impacts are now global. The technology is growing so fast. Now you do not need to send a letter by mail and wait days to be received, you just send an email and it will be received immediately. This is an example of how the technology has changed.

This is a very useful tool and certainly our generation relies heavily on her, especially when we talk about the Internet. This has become the everyday use of millions of people around the world of all ages, children, teenagers, adults, and including grandparents. Use of internet has grown a lot since it was introduced in the world. Used for a multiple things either for the workplace, entertainment or informative. The Internet has brought a transformation in many aspects of life. Nowadays one can access the internet easily, from your computer, iPod, iPad, cellphone, etc. It is one of the biggest contributors in making the world into a global village. Now, let’s talk specifically about the websites. It is a connected group of pages on the World Wide Web regarded as a single entity, usually maintained by one person organization and devoted to a single topic or several closely related topics.

A website is a set of related web pages that contains text, images, video, audio, etc. It is hosted on at least one web server, accessible via a network such as the Internet or a private local area network. How many different Internet pages exist? Of course, there are hundreds of millions and all for multiple uses. The Internet is a network of computers that offer access and information to people. To use the Internet, you run many different programs depending on the type of information you wish to view. Our specific research, will be evaluating the various and diverse websites that exist and which are the most used by people either in general or between adolescents that spend a lot of time on the internet. We will also be evaluating their uses and why people consider them as important in their use. Also we will be evaluating and comparing some surveys conducted by Internet and other related by ourselves to the issue of websites.

We will be focusing on three specific types of websites: educational use, social networks and websites of enjoyment and entertainment. In May 2012, McAfee conducted an online survey in the United States to determine which were the favorite websites for teenagers. Youth between the ages of 13 and 17 responded to the survey for a total population of 1,004 responses. The results of the top three were as follows: first place was Facebook, then Twitter and in third place, Google+. But these are not the only ones that was mentioned, in the survey also appears Tumblr, 4chan, Pinterest, and Myspace. When we see these findings, these results seemed very peculiar and interesting and that is why we base our investigation on this topic. As we analyzed these results, we though the idea of ​​doing a simple survey to see if the results of the online survey conducted in the United States in May 2012 by McAfee coincided with our friend’s opinion. Thus, we launched an online survey. What we did? Our first step was randomly select 30 people between the ages of 17-21. We conducted the survey with three simple questions.

The first question that we make was based on how many daily hours the adolescents spend on the Internet. This is because we know that nowadays the adolescents spend a lot of time in the internet and we want to found make a survey that support our opinion. In our survey only two people responded that they were on the Internet just between 1 to 2 hours, by other hand, 12 others said that they spent between 3-4 hours and 16 respondents said that they spent more than four hours on the Internet. This first question not only tells us that most of the people spend more than four hours online, but it makes us think that probably many of these young people just have an addiction in spending so much time on the internet daily. We have to be very careful with this and one important thing that we must keep in mind always is that we must establish control and balance in our time. Excessive use in a computer can become dangerous.

It can affect multiple things: even our sight until we get time to rest or to share with family and friends. Inclusive, according to new research, teens that spend an unreasonable amount of time on the Internet could be at increased risk of depression because they are alone in a computer without a social life. This can also be reflected in the body of the young. Both in the United States and Puerto Rico, there is a big problem of obesity in young people. Many of the conditions blamed for obesity in American teenagers also affect Puerto Rico: families that work more and eat fewer meals at home, in some neighborhoods a fear of crime that keeps children indoors, but mainly, due to the excessive time spent by youth in front of the computer. For this reason, is very important to remain that we all need to exercise and eat healthy to maintain a good body and good health and spend less time in the Internet. We can’t spend all the time in the internet.

The second question in our survey was: what is your main reason for using the Internet? And the results were: 17 people said for social and interaction, 10 said for entertainment and only 3 people said for education. This worried us a lot because these results reflect the loss of time on the Internet youth instead of spending time with their studies. That’s why we emphasize again the creation of a good balance in our time. The third and final question was: Which is your favorite website? And the results were: Facebook was the favorite for 21 people, Twitter was the favorite to 8 and only one person said Google. Facebook has over one billion active users, more than half of them using Facebook on a mobile device. This social network is considered like an addiction for a lot of people. Internet addictions, especially to social media, have been well documented. And the truth is that we’re feeling like we might have a touch of Facebook addiction.

Is this addiction real, though? In China, Taiwan and South Korea “Internet Addiction Disorder” is already accepted as a psychological diagnosis. Facebook and Internet addiction can have damaging effects, such as a decrease in our attention span. In fact, since 2000, our collective attention span has decreased by 40%. Researchers in Norway have published a new psychological scale to measure Facebook addiction, the first of its kind worldwide. They hope that researchers will find the new psychometric tool useful in investigating problem behavior linked to Facebook use. With this research information, we can conclude that Facebook, like many other social networks, are not only an addiction in Puerto Rico and the United States, but is a huge problem worldwide. It’s a double-edged sword for sure.

That is why we must be careful. This does not mean that all social networks are bad or should not exist. Only we want to create awareness among people and be realistic. Today we all have access to technology, the Internet and multiple websites, but we only want to emphasize that we must be careful not to fall into addiction. All this can be a great resource and a great help to our education, academic preparation, in the work, and to socialize, so let’s make our own balance in the use of them. Besides the Internet, there are many books that can be of great help. All resources are always there. It is in us to use them as an advantage and not allow them to become our double-edged weapon.

Technology as a double-edged weapon. (2017, Jan 27). Retrieved from http://studymoose.com/technology-as-a-double-edged-weapon-essay 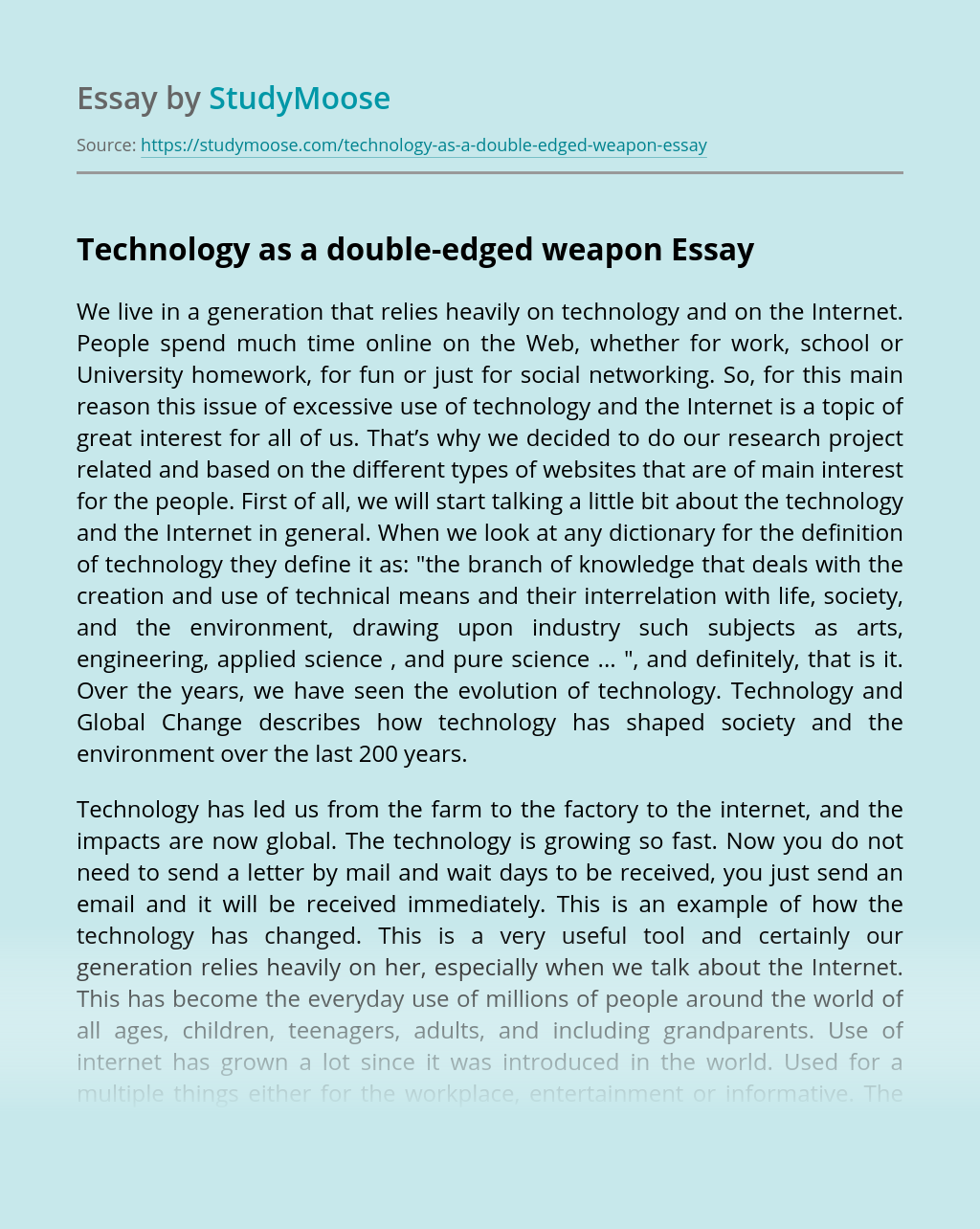 Don’t waste time
Get a verified writer to help you with Technology as a double-edged weapon
Hire verified writer
$35.80 for a 2-page paper
Stay Safe, Stay Original