Language is defined as ‘a system of communication by speaking, writing, or making signs in a way that can be understood… a particular type of expression’. The reliance on this complex is immense: one is incapable of envisaging a world in the absence of it. Throughout the years, history has demonstrated manipulation is one of the most powerful weapons the world possesses. From deceiving propaganda to censorship – both past and present – people are constantly misled to believe and abide by certain terms without comprehending the repercussions.

Don't use plagiarized sources. Get your custom essay on
“ Dystopian Literature: Is Language a Powerful Weapon ”
Get custom paper
NEW! smart matching with writer

The backbone of dictatorship success has repeatedly been the exploitation of words. Society has often been ignorant and unwittingly chosen to neglect the power of language. To explore the power of language as a weapon, dystopian literature can be looked into. Dystopian regimes rely and feature language as a key aspect to gain absolute power by manipulating its people. The potential of language in modern society can be understood by drawing upon warnings in fiction.

Dystopian literature novelists frequently incorporate the struggle of living under a totalitarian regime within their works. Atwood’s ‘The Handmaid’s Tale’ and Orwell’s ‘1984’ are distinguished novels in which the population is greatly oppressed under the control of autocrats. It should be noted there is heavy reliance on the handle of memory, history and knowledge – all through the use of language. The clear purpose of controlling language is to control the perception of reality the capacity of language does not go unnoticed in dystopian novels. Access to language and literature is considerably restricted and forbidden.

Whether its physical destruction of books (as seen in Fahrenheit 451), limiting one’s use and access of words or formulating an entire new dialect. These agents fundamentally facilitate the absolute domination of a population a rebellious concept is unable to be composed and expressed if there is no means to do so. By looking into dystopias it is evident that the capability of language demands to be considered.

In the novel ‘1984’, George Orwell conveys a totalitarian world with an abundance of restrictions – the ‘success’ of Oceania and the power it holds is built upon various aspects. The protagonist, Winston is relayed to be a records editor at the Ministry of Truth – whose work contradicts the name. History is rewritten depending on the party’s needs: articles revised, past Big Brother speeches altered, documents due for destruction dropped down ‘memory holes’. A party slogan states, ‘Who controls the past controls the future who controls the present controls the past’. All this supposedly, for the benefit of the people. The non existence of freedom of expression by constraint of freedom of thought was not the only catalyst Orwell used. Individuals were not entitled to linguistic freedom which is seen through the introduction of newspeak (the official language of Oceania). INGSOC has successfully confined its people by ensuring the party’s truth is the only truth.

Advertised as an implementation to equate society rather than segregate it newspeak is the deliberately ambiguous and contradictory language used to manipulate the public. It is designed to ensure the ideological premises of Ingsoc the only expressible doctrine. While most languages tend to gain words and amplify expression, ‘newspeak is the only language in the world whose vocabulary gets smaller every year’. Any word that depicts an opposing concept is immediately obliterated. For example ‘If you have a word like ‘good’, what need is there for a word like ‘bad’? ‘Ungood’ will do just as well… if you want a stronger version of ‘good’, ‘plusgood’ or ‘doubleplusgood’’. Furthermore newspeak promotes a narrowing of thought and awareness if a language is less expressive, the mind is easily controlled. Through demonstrating that a person or people of power who creates a new form of expression and mandates how it is used can control the minds of its citizens, Orwell warns the reader. By developing an entire new ‘beneficial’ dialect, the party is greatly capable of ensuring rebellion is non existent.

Orwell once stated ‘If thought corrupts language, language can also corrupt thought’. Syme, a fellow ministry of truth worker emphasises ‘the whole aim of the whole aim of Newspeak is to narrow the range of thought’. By restraining language, Big Brother gains the ability to manipulate the way people think if no words exists to formulate an idea, there is no means of expressing it. Thoughtcrime is a significant factor of the novel. The concept of a thought contrary to the party’s beliefs to be classified as a crime is one leading to an immense magnitude of fear. Allegedly, newspeak ‘shall make thoughtcrime literally impossible, because there will be no words in which to express it. Every concept needed, will be expressed by exactly one word, with its meaning rigidly defined and all its subsidiary meanings rubbed out and forgotten’. The limitation of expression, restricts thought, annihilating free will. For a totalitarian regime to possess power entirely, it is essential that all aspects of society (including language) are dominated and dictated by the party.

Throughout ‘The Handmaid’s Tale’ Margaret Atwood warns readers how the power of language can exploit the mind and disregard reality. The power of using language as a weapon has a profound impact on the handmaids. There is a constant feeling of consciousness, wariness and fear among everyone. The novel is distinctly interior. The lack of dialogue stresses the suppression of women’s voices and the threat communication holds against Gilead’s order. When Offred goes on her daily trip with a peer, their exchange is only in reflexive, confined phrases: ‘Praise be’, ‘Under His eye’, ‘May the Lord open’, ‘Blessed be the fruit’. Constantly searching for ‘open space’ Offred often discusses the metaphoric walls in place, ‘so we can talk. If you can call it talking, these clipped whispers, projected through the funnels of our white wings. It’s more like a telegram, a verbal semaphore. Amputated speech.’ Despite these restrictions it is conveyed to the reader the women have found methods to fulfill their desires of contact ‘learned to whisper almost without sound’. The inclusion of such statements reiterates the dependence on language. One could interpret that the minimal dialogue present as manifestation of the extent a regime can influence an individual.

Moreover, Atwood demonstrates to the reader how linguistic power can contribute to sexism in society. As stated by Michael Greene ‘language itself functions to determine expectations about who speaks, who listens, who teaches, who gets taught, whose communities are of value’. Offred states ‘Fraternize means to behave like a brother. Luke told me that. He said there was no corresponding word that meant to behave like a sister, Sororitique it would have to be’. There is an implication that since Luke, her husband said that, it is definite the man holds the power to decide to remove or create a definition. In an instance when she discusses the grammatical variation between lie and lay, ‘Even men used to say, I’d like to get laid. Though sometimes they said, I’d like to lay her. I had only their words for it’, Offred discusses the divisions between the powers of men’s and women’s language. The quote reveals the limited insight she has on the opposite gender’s verbal view of their sexual and political relationships the statement also relays the manner in which men talked about women. Atwood’s subtle use of ‘words’ instead of ‘word’ debates the cliche ‘their word’ it becomes an observation on male empowerment in controlling language. Throughout the novel Atwood’s tone can be considered feminist her description of language differentiaon depending on gender is an important aspect that emphasises the power and influence of the regime.

Access to language is explicitly restricted under totalitarian regimes. In 1984, oldspeak ‘with all its vagueness and useless shades of meaning’ is abolished and newspeak introduced – citizens of Oceania no longer have the channels to compose anything that has the capability to go against Big Brother. The women of Gilead in ‘The Handmaid’s Tale’ are denied literacy which is replaced with biblical stories read by the Commander. Offred is immediately drawn to words she finds inscribed in a room. She is presented with a magazine ‘supposed to have been burned’, the Commander states ‘what’s dangerous in the hands of the multitudes’ As knowledge can empower, reading and writing are strictly forbidden to the general population no longer a form of communicating opposing beliefs – a previous risk. Ray Bradbury’s ‘Fahrenheit 451’ centres around the physical burning of books ‘A book is a loaded gun in the house next door’. This is the common ground belief and alarm of those in control. Orwell’s Syme states ‘It’s a beautiful thing, the destruction of words’. In these novels the constraint of language is seen as a beneficial necessity. Political leaders manipulate their people to believe and accept that these changes and decrees are for their good. The limited access leads to language becoming a blunt, inoperative, confined machine in the hands of the people. In the possession of an intelligent leader it is a menacing, convenient, loaded weapon capable of vast manipulation.

Considering the significance of using linguistic power as a manipulative weapon is explored in numerous dystopian novels. In both ‘The Handmaid’s Tale’ and ‘1984’, it is an obvious form of state control by manipulating language to restrict freedom of thought – dystopian regimes stay in power. Both protagonists live in fear, are apprehensive and analytical. Orwell highlights the importance of language in relation to human thought as it structures and limits the ideas that individuals are capable of formulating and expressing. The discussion of the elimination of thoughtcrime links to Orwell’s thoughts on reality if an agency has any possibility to alter the structure of language, it is able to make disobedience and/or rebellious thoughts and actions impossible. Atwood explores language through communication and through ‘The Handmaid’s Tale’ reveals the relation between power and language and how the hierarchy is able to misuse it to control and discriminate against its citizens. Both in fact and fiction restriction of public discourse is an essential aspect to a totalitarian regime. To gain absolute control, a regime requires equity of support no alternative to the state should be present. Regardless of interpretation it has been made evident that one can not afford to be ignorant of the capability of language. Arguably, in the hands of a skilled person, the perception of reality can be manipulated. 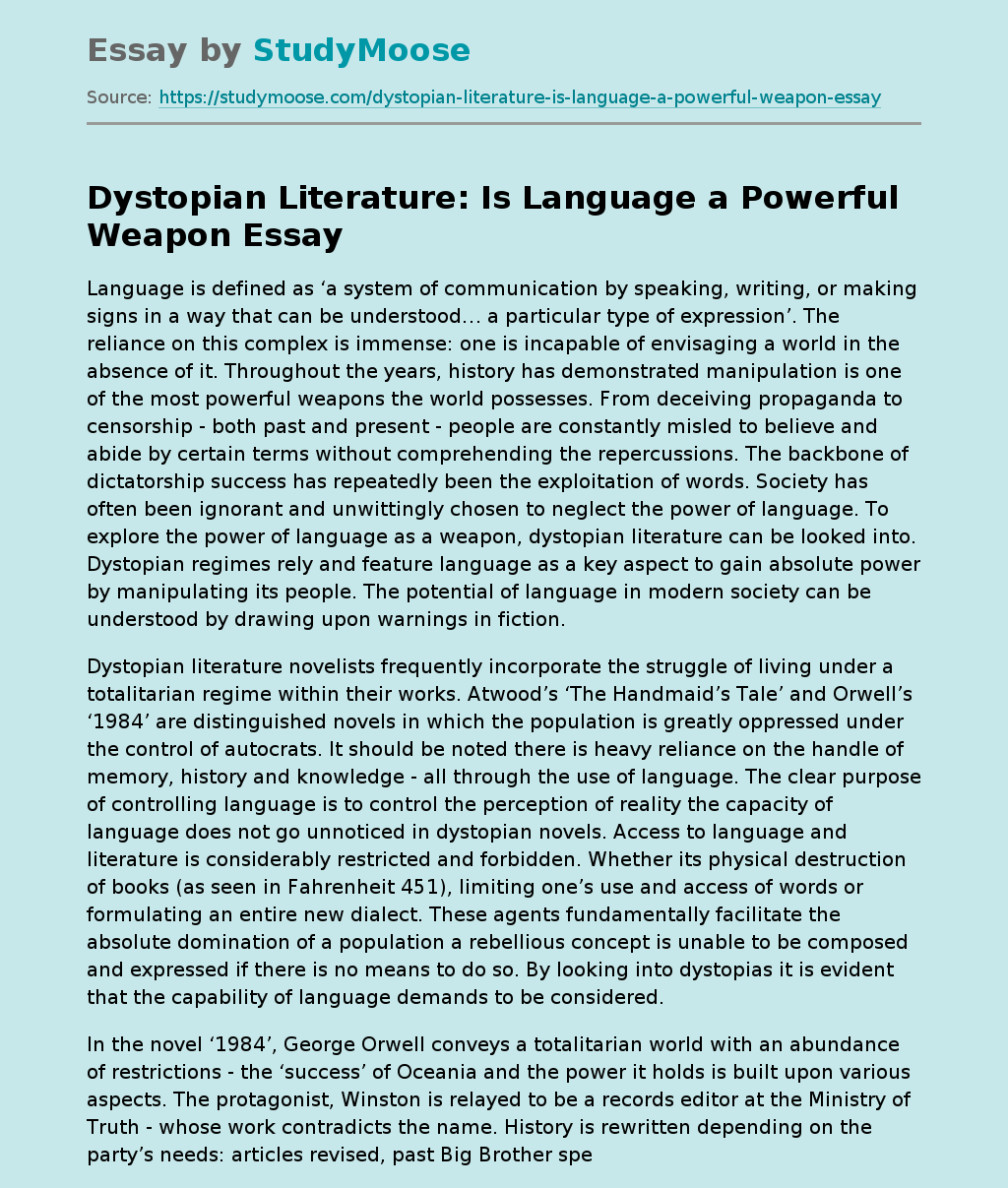