Comparing The Powerful Images of the Tyger and the War photographer

William Blake and Carol Ann Duffy both utilize powerful imagery to describe the “War Photographer” and “The Tyger”, making similar statements about them. In addition, both poems use vivid imagery associated with the theme of religion and war.

The use of imagery by both poets emphasizes the parallelism between the “The Tyger” and the “War Photographer” as it suggests that both these characters prey on death. For example, William Blake describes the Tyger to have a “fearful symmetry” and “fire” in its eyes.

Don't use plagiarized sources. Get your custom essay on
“ Comparing The Powerful Images of the Tyger and the War photographer ”
Get custom paper
NEW! smart matching with writer

The words “fearful” and “fire”, create a semantic field of ferocity and danger associated with the Tyger. Furthermore, this highlights the savage and formidable side of the Tyger, making the predatory nature of such an animal prominent. The use of the word “symmetry “ not only indicates the Tiger’s symmetrical appearance but also, on a deeper level may imply the ordered and mechanical manner in which it kills its prey.

This is because the fact that its appearance remains symmetrical suggests how emotionless and insensitive it is when using the death of other animals to fuel its own ruthless mind and body.

Although the “War Photographer” isn’t portrayed to this extent of barbarity, the fact that he uses death and suffering as a source of income is certainly similar to the Tyger’s situation. This is exemplified when Carol Ann Duffy says that the War Photographer “stares impassively at where he earns a living.” The use of the adverb “impassively” conjures up images showing how the War Photographer is so unemotional and machinelike in the way he takes pictures of the death and suffering of War just to “earn a living.

” Therefore, in this way, the mental images formed in reader’s mind from each poem illustrate that the War Photographer is synonymous with the Tyger as they both cold-heartedly use the medium of death to improve their own lives.

However, on other hand, the dichotomy of both the Tyger and the War Photographer is also made clear with the use of imagery. For example, William Blake also depicts the Tyger to be “burning bright.” This emphasizes the magnificence of the Tyger in a much more “bright” and positive manner, juxtaposing its deadly and dangerous side. The use of bilabial plosives in the ‘b’ sounds in “burning” and “bright” creates an explosive and energetic sound, creating images of an animated and vibrant animal, contrasting to the alternative dull and spiritless perception of the Tyger. Moreover, the depiction that the Tyger is a thing of beauty rather than terror is accentuated when the Tyger, which is “burning bright”, comes from “the forests of the night.”

This paints a picture of the Tyger being something good coming out of evil as the words “forest” and “night” have connotations of something dark and sinister, contrasting to the magnificence of the Tyger’s brightness. William Blake also goes on to ask the question “Did he who made the Lamb make thee?” This is referring to God as the Lamb is depicted as the ‘Lamb of God’. This question reinforces the idea that there must be something good coming out of this seemingly deadly creature if God is its creator. The reason for this is that God is often pictured an omnipotent, benevolent figure and the fact that he created the “Lamb”, a symbol of complete innocence and purity, reinforces this.

Therefore if he created the Tyger, there must be a positive outcome to its invention. Perhaps Blake is conveying the image to the reader that the valuable purpose of the Tyger is to create a natural order of balance in the world. Although on the surface its predatory nature seems only to have negative impacts, it is required to ensure the survival of not only its own species but also to prevent the overpopulation of prey species like the Lamb. This imagery implies that the Tyger needs to prey on animals such as the lamb in order to keep balance in the world, and to allow the circle of life to happen, a concept that is reinforced by the cyclic structure of the poem. Similarly, in War Photographer Carol Ann Duffy mentions how the War photographer “sought approval without words to do what someone must.”

This adds a sense of morality to his job and the purpose of it, just like the creation of Tyger benefits the world in a much larger sense; he doesn’t do it just to earn money. This produces a contrasting image on the War Photographer as it suggests he is doing something right and “what someone must” as making people aware of the death and suffering in the world, is a step closer to resolving this problem of war. Furthermore, powerful imagery used by both C. A. Duffy and William Blake, emphasizes the duality of the Tyger and War Photographer. On the surface, both the Tyger and the War photographer seem to be emotionless and insensitive in the way they prey on death but the larger, meaningful purpose of each character is also portrayed.

Powerful imagery is also presented in both poems via the theme of religion. For example, in War Photographer, strong religious imagery is created with use of the Bible quote “All flesh is grass.” This implies that all life is as temporary as grass and just like grass life will shine for its season but then wither, fade and die. Alternatively the “flesh” could be a metaphor for death, suggesting that death in war is as common and in huge numbers as blades of grass. Nevertheless, both these interpretations highlight the ephemeral nature of life in war. Perhaps Carol Ann Duffy uses the fact that quote stems from the Bible to almost blame Christianity or religion for allowing or creating War, which makes life so fragile and transient.

Furthermore, maybe, C. A. Duffy conveys these religious images to the reader, to highlight the doubt she has in the supposed altruism of God for creating war. William Blake uses religious imagery similarly in the Tyger. “What immortal hand or eye, Dare frame thy fearful symmetry?” This questions the nerve of the “immortal” God to create such a “fearful”, dangerous creature. Perhaps Blake uses the terror of Tyger to represent the suffering and death in the world and in this way, he creates striking images to question whether God is truly beneficent. This image of an uncompassionate God is reinforced when God is questioned to have “dread hand” and “dread feet” for creating this creature.

The use of the adjective of “dread” to describe God produces powerful images that oppose the assumed kindness of God, implying that this all-powerful figure may also harbour malicious intent. Perhaps Blake is alluding to the fearful Jehovah like image from the Old Testament, questioning whether in fact he is a benevolent figure for creating the death and suffering that the Tyger embodies. Therefore, the religious imagery in both the War Photographer and the Tyger question whether God’s good will for creating suffering in the world emphasized through the creation of the Tyger and War.

An apparent difference in the portrayal of images between the 2 poems is that the War Photographer is closely related to humanity, whereas The Tyger focuses on images beyond human. In War photographer, C.A. Duffy emphasizes the effect of War on humans such as the “War Photographer” and the ”readers” of his pictures. For example the War photographer’s hand is described to “tremble” when he is forming the pictures of “agonies.” The words “agonies” and “tremble” paint a vivid image of the hardships of his job and the amount of fear he has when witnessing the horrors of war. Therefore, the plight of the War Photographer evokes the base instincts of empathy from the reader. Carol Ann Duffy also goes on to mention, “The reader’s eyeballs prick with tears” when seeing the “agonies” in the pictures that the War Photographer takes.

The use of the verb “prick” to depict how the readers weep when seeing theses pictures, illustrates how superficial and apathetic this response is, the photos just “prick” the surface of their “eyeballs”, it is not heart-felt or deep. Perhaps this displays that these readers forge even this feeble gesture of respect, as they have to go the extent of pricking their eyeballs to make themselves cry, as it does not come naturally. This is to “prick” is quite an abrasive or forceful verb may imply that they are forcing themselves to artificially show that they care, when truly “they do not care.” This gives the impression that the readers suffer from compassion fatigue, they are desensitized by the sheer number of horrific photos of War that are presented to them and subconsciously, they realise this lack of compassion but they do not want to display it. In this way C.A Duffy, brings this insensitivity that masked by artificial acts of kindness of the viewers (of pictures of War), to the forefront of the reader’s mind.

Furthermore this imagery is quite because it questions whether the reader (of this poem) deep inside, have this same indifference to the pictures of War, many readers would relate to the way they are often dismissive of these images (like the readers in the poem), making them almost feel guilty. However the visualization in the Tyger creates very different effects on the reader. The lexical patterning of the words “immortal”, “distant”, ”wings” and “heaven” creates a strong impression that the only 2 figures in this poem (The Tyger and its creator) are superhuman and celestial, creating a very mystical tone to the poem.

This is reinforced with auditory imagery through the incessant trochaic metre of the poem and the repetition of the word Tyger, very much chant or hymn like, re-iterating the supernatural theme to the poem as hymns are sung to emphasise the magnificence of God. Therefore, this leaves the reader is awe and amazement of the power of these 2 figures that belong to a world much beyond the one of a human. Thus, the imagery in the Tyger and the War photographer also has very different effects on the reader, one leaving you with emotions of empathy and guilt and the other with a sense of wonder.

In conclusion, Carol Ann Duffy and William Blake both present powerful images of the figures of the War Photographer and the Tyger that make them very alike.

Comparing The Powerful Images of the Tyger and the War photographer. (2017, Nov 05). Retrieved from https://studymoose.com/comparing-the-powerful-images-of-the-tyger-and-the-war-photographer-essay 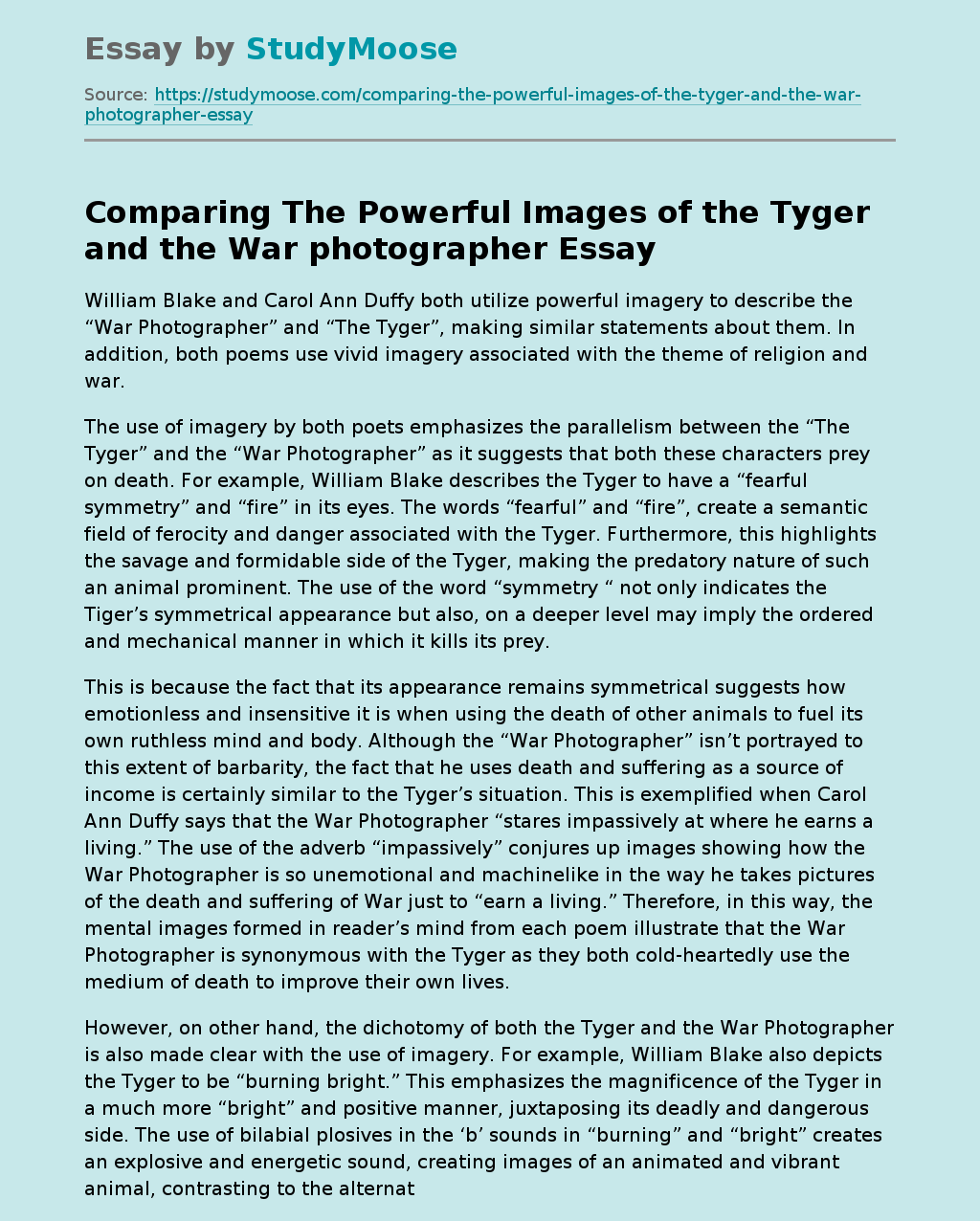