This essay will analyse, compare and contrast two poems by William Blake, called ‘The Lamb’ and ‘the Tyger’. I will be looking at how Blake uses imagery, structure and form to create effects. I will then explore how representative the techniques used are of Blake’s other work.

Blake grew up in a working class background, he had no early education but he taught himself by reading books he had.

Don't use plagiarized sources. Get your custom essay on
“ William Blake Compare and Contrast ‘The Lamb and the Tyger’ ”
Get custom paper
NEW! smart matching with writer

Especially the Bible and Paradise Lost. Blake started writing through the Industrial revolution; it was a great time of upheaval and paranoia. Blake was not only a poet; he was also a artist. Throughout his life he earned money by having a job as an engraver.

Although he wrote many poems they didn’t receive much feedback until shortly before his death. In Blake’s later poetry he attempted to create his own kind of Mythology.

He rewrote the story of creation out of Genesis from the Bible; he also rewrote the entire history of humanity. During Blake’s life he was known for being a big on the crazy side, he had irratic ideas and always pointed out what was wrong with the world as in his own view. As a child Blake saw visions, of angels and demonic creations which weren’t meant to meet the human eye.

‘The Lamb’ appears to be about creation; it is very child like. Just like a children’s nursery rhyme, the structure of the poem is very simple.

The speaker is presenting the question.

‘Little Lamb, who made thee?’

This is implicating who made the lamb. I believe that a child is asking God or his mother who made that lamb. This can link to Blake rewriting the story of Creation from Genesis. The Child is asking what creation is, and who made you. Blake questions his own poems; he inflicts his own views on the subject. For instance here Blake has decided to use a Lamb as an example for the Bible, creation etc. He uses a speaker (the child) to ask who created the lamb. I believe he is questioning creation in his own poem. ‘The Lamb’ expresses creation to the reader, its structured so that the reader picks up the main question Blake is trying to put across.

Similarly, ‘The Tyger’ is the opposite. The structure of the poem is very aggressive. It uses very complex language, very unchild like compared to ‘The Lamb’. It is telling you the questions instead of asking questions and it doesn’t require you to answer; it is a form of a rhetorical question. The first and last verses of the poem are the same apart from the last line at the end were it ends with:

This is an unfinished/unanswered question of who made the Tyger. Blake decides to finish the poem like this to question the reader. In ‘The Lamb’ Blake answers his own question, but in this poem Blake leaves it unanswered. I think he does this because in ‘The Lamb’ he is questioning God and creation, therefore he should be answered because of the power God has. Where as ‘The Tyger’ is evil and Blake has left the question unanswered because it might not have an answer.

Blake’s poetry is full of striking images. The ‘Tyger’ creates a lot of imagery involved to make the reader think about what Blake has written about in his poem. He tries to show the reader the world through his eyes and his views on good and evil by using imagery.

For example in ‘The Tyger’ he uses striking imagery.

In the forests of the night’

He tries to create a vision of evil lurking in a dark forest at night. ‘The Tyger’ glowing with its orange coat and black stripes. Blake uses a tiger because tigers are predators and have no feel for good only evil. And back in Blake’s years they were probably thought of as evil creatures. By using colours Blake makes the tiger’s colours and the forest contrast. He create a simplistic effect by saying the tiger is burning bright, a tiger doesn’t really burn so therefore he’s using a simile. He also uses a tiger because of what it looks like; it’s aggressive which makes his poem more full proof.

In ‘The Lamb’ Blake’s creates sweet and peaceful imagery to make the reader think good of the Lamb. We visualise a baby lamb, in a field bleating to its mother and the mother is answering the question but we could also visualise a child – by child being the lamb asking God or its mother who made it.

‘Does thou know who made thee?’

The Child (Lamb) is asking who made me and then its mother or god is answering the question. Blake uses a Lamb because a Lamb is white; Blake is trying to get the reader to think of heavenly white colours to contrast with what he’s trying to put across to the reader. This is good imagery and helps the reader get a better imaginative view on the poem.

Both poems take the form of conversations with the animal to which many questions are addressed (in ‘The Lamb’ Blake gives the answers.

I think Blake decided to write the poem in the form of a story rather than a poem, but it still has a very interesting rhyme scheme which I will cover later. Both poems are structured in a different way to one another. For example in ‘The Lamb’ it’s structured as a nursery rhyme, where as in ‘The Tyger’ it doesn’t have a rhyme scheme but has more stanzas than ‘The Lamb’.

In ‘The Lamb’ there is a nursery rhyme scheme used its very child like because the boy/speaker questioning creation (The Lamb) is speaking in a very child like voice. It’s structured to get you thinking about who is talking, is Jesus or the lamb? Or is the child speaking to the lamb. It has two stanzas in the first stanza (first half of the poem) the child is talking to the lamb, questioning the lamb. In the second stanza it is telling someone about the lamb. It is a neat simple rhyme scheme. This is how ‘The Lamb’ is structured.

‘The Tyger’ is not suitable for a nursery rhyme. It has more stanzas; 6 to be exact. Rather than asking the question and answering it like in ‘The Lamb’ – the poem repeats the same question to the reader. But is still left unanswered because ‘The Tyger’ is so evil it doesn’t deserve an answer. Blake chooses to do this to question the reader and try and create an imaginative effect on the reader – so the poem questions the reader rather than the reader questioning the poem. For example:

In the forests of the night

What immortal hand or eye,

Could frame thy fearful symmetry’

This stanza is written at the start of the poem, and then it is written again at the end. But the last sentence changes.

In the forests of the night

What immortal hand or eye,

The language used in ‘The lamb’ is very simple and child-like. It uses happy, peaceful language. It is very basic like a nursery rhyme – all nursery rhymes have a child-like world view, they are happy. Usually light hearted, and have a happy ending. Some words can have more depth and complexity within. The poem is an advanced and more complex version of ‘Bah Bah Black Sheep’. A child wouldn’t be able to understand it. The words are either monosyllabic or disyllabic. It also puts forward a traditional Christian version of the universe, in which we know answers tell the different questions and all is peaceful balanced and complete. Alliteration is used to emphasis the point the poem is trying to get across.

In the second stanza the poem repeats the same answer twice:

‘Infant Joy’ is a poem about a newly born healthy baby, whom is a good, healthy baby on a very happy occasion. This links with ‘The Lamb’ being good, a religious view. It is also a very simple poem, which is similar to ‘The Lamb’ – it is like a nursery rhyme. There is a use of repetition:

This reflects the innocence of the poem.

The poem tries to create a happy imagery effect. It tries to show the happiness of the child’s birth.

Once again this reflects the innocence of the poem.

It’s a positive view of the world, and the tone is very happy. Similar to ‘The Lamb’ since they both have good views on life, creation, and both create happy and peaceful imagery.

In contrast ‘Infant Sorrow’ is a poem about a baby who has been born into a terrible, mistakable world. This is the opposite of sorrow – its Blake’s view on being born into a bad world. It is a cynical view on child birth.

To signify how the parents are feeling about the birth.

The poem shows an experienced view of the world because Blake shows the two faults of the world. Sorrow uses powerful and very descriptive words to create the effect that Blake is trying to get across.

In conclusion, the poems explore different views on innocence and experience. Blake tries to show two views on good and evil by writing poems. In the 17th Century his poems were very appealing. They showed 2 views on life which was very interesting back then. The 1764 collection was called “Songs of Innocence and of Experience Shewing the Two Contrary States of the Human Soul’. These poems are appealing but I think the most appealing ones are Innocence and Experience they are very important and can show one another a different view on life. I think Blake has done very well to express his own views on life through a poem.

William Blake Compare and Contrast 'The Lamb and the Tyger'. (2017, Oct 19). Retrieved from https://studymoose.com/william-blake-compare-and-contrast-the-lamb-and-the-tyger-essay 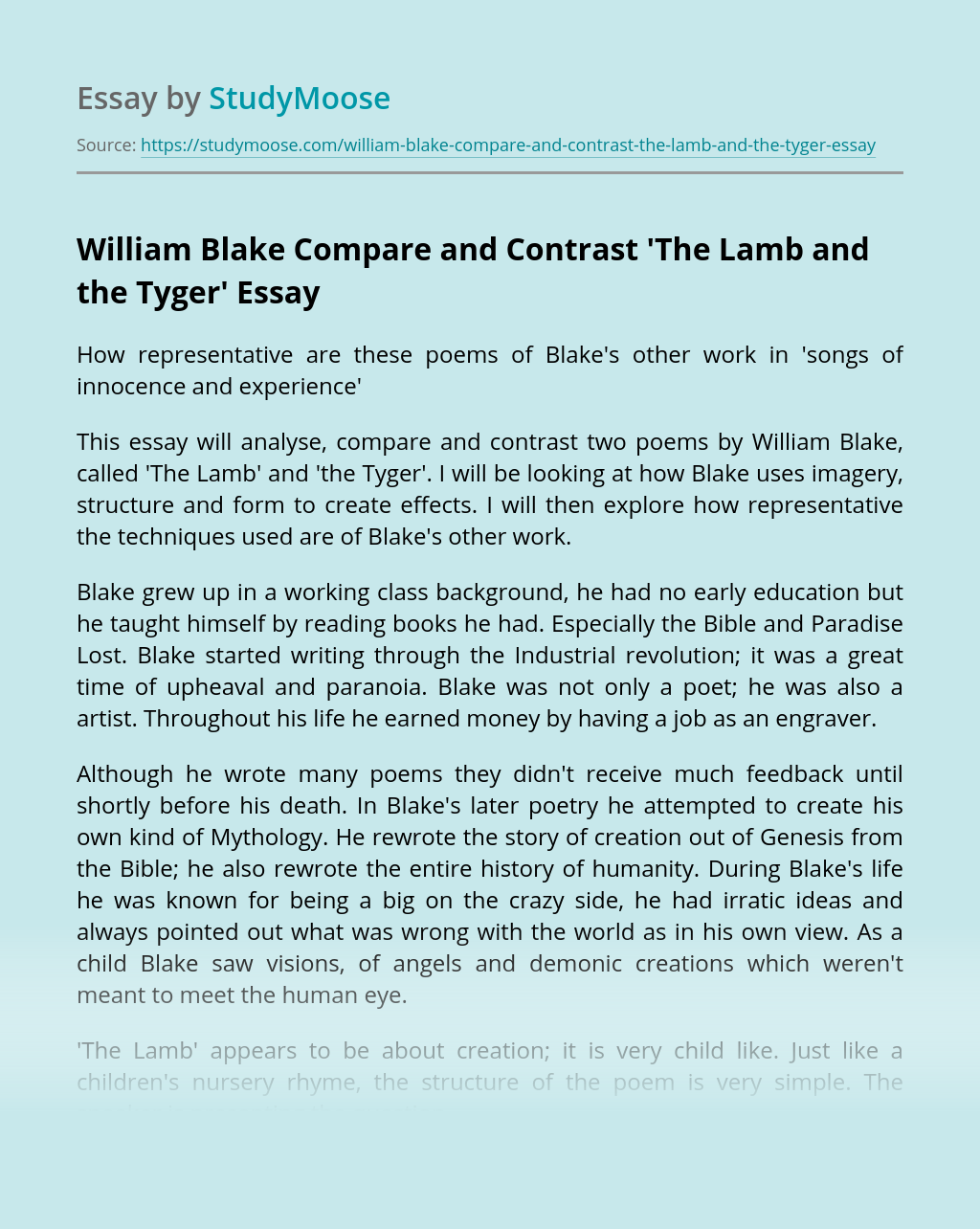