If conducted in a friendly manner ragging can be a good way of interaction between seniors and juniors, but there have been many instances of painful ragging and I students shudder at the thought of going to the college on the first day The feeling of finally completing school and standing on the threshold of a new life i. e. the college life, is simply indescribable. It gives an individual a pleasant feeling that finally, he/she is free from the closed circuit environment of a school and is ready to lead a jolly, yet responsible life, in the college campus.

Don't use plagiarized sources.
Get Your Custom Essay on University and Ragging Just from $13,9/Page

As the college reopens, the fresh batches of students enthusiastically step into their campus, with much excitement about their days ahead, including the interaction with their seniors. Very often, there is also a huge fear of ragging lurking as well, at the back of most minds, which acts as a major dampener for all the excitement. This fear is not unfounded, as it’s a fact that college ragging has, at times, taken very ugly forms.

What is normally supposed to be amicable welcoming of fresher into college life, by their seniors, sometime turns into gory act of physical and mental harassment.

But, just like the two sides of a coin, the practice of ragging also has its own positives as well. Let us examine why one should support ragging or oppose it and how to deal with the situation. Why Ragging? Many people think that by ragging, teenagers are provided a brief outline of what to expect during the first weeks of college. Ragging is ideally meant to break the ice between the new entrants and the seniors. It gives a chance to the freshly passed out school students to act maturely and interact with their seniors.

In fact, ragging is a fun-filled way to make the new students get acquainted with the rigors of college life. Some lighthearted comedy, mimicry and jokes during ragging can make it a lot of fun. Hence, if conducted in a healthy manner, the practice provides a great kick-start to the college life. Why Not Ragging? Over the years, the practice of ragging has turned ugly. Instead of just being a fun way of interaction, it has turned into a type of molestation (both physical and emotional) of the fresher.

Every year, we hear a number of cases of severe physical ragging as well as sexual abuse during ragging. This has a great adverse psychological impact on the personality of the students and the scars of such incidents take a very long time to heal. Suicide cases have reached the peak, just because of misbehavior of the seniors, during ragging. This is the reason why educational institutions, especially those which provide hostel facilities, are strictly against ragging. How To Handle College Ragging? Go to the college with an open mind.

If the ragging is in the form of a healthy banter and jovial leg pulling, enjoy it. But, if it turns out to be nasty and you are forced to do certain things against your will, don’t take it lying down. Report the matter to the appropriate authorities. These days, every college has an anti-ragging squad within its campus. Such squads consist of volunteers who are responsible for keeping a check on unhealthy ragging among students. Get hold of the helpline installed by the college authorities, to counsel students on how to deal with ragging and whom to approach in such circumstances. 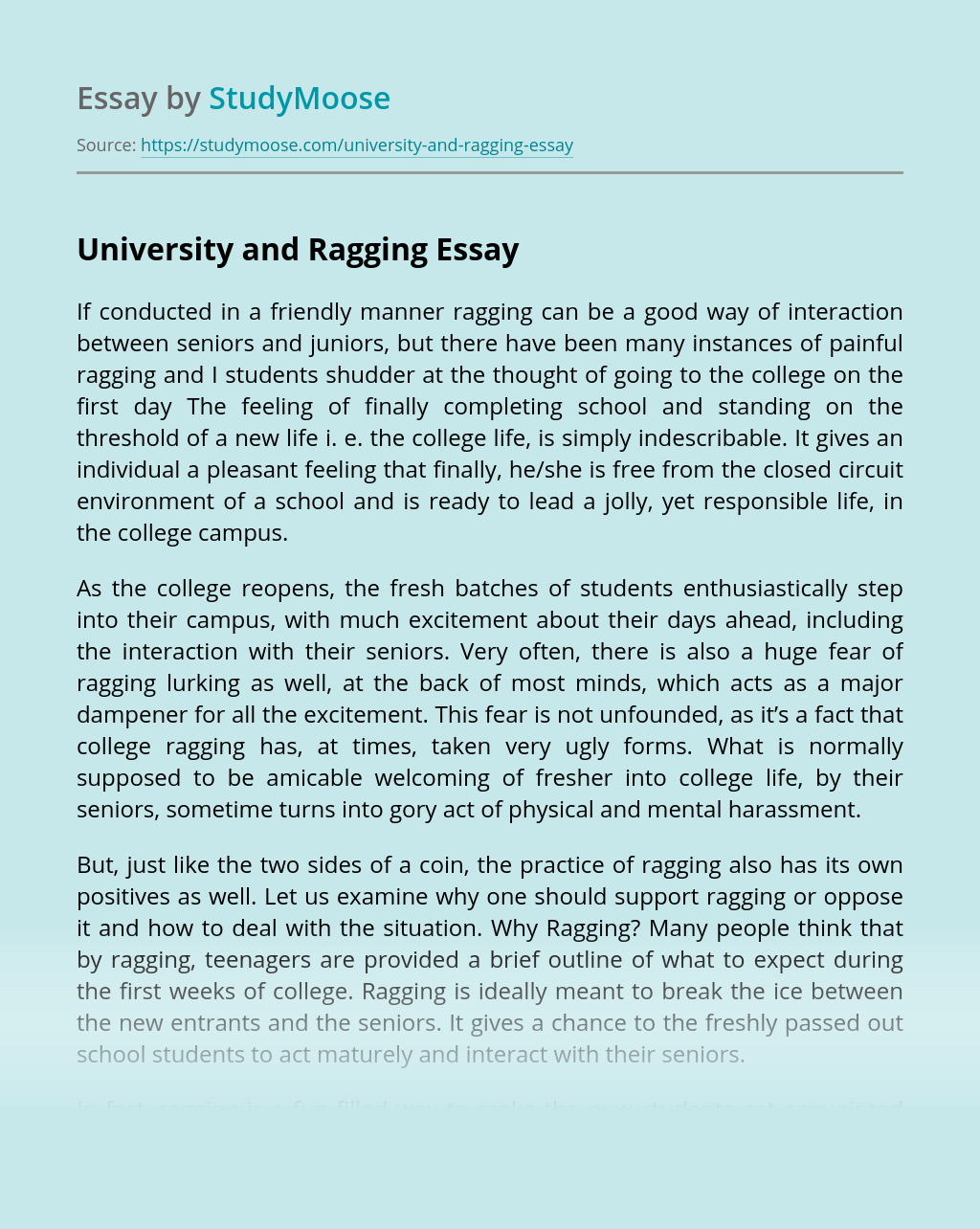 The Person-Centred Approach developed from the work of the psychologist Dr. Carl Rogers. In 1940s to 1960s, Carl Rogers approach to therapy was considered revolutionary. His specialist knowledge didn’t come from a theory but rather from his clinical therapy. Consequently, theory came out of practice. Person-Centred Therapy was originally seen as non-directive. The reasoning for... VIEW ESSAY

View sample
Every Eel Hopes to Be a Whale

The above lines “Every eel hopes to be a whale” expresses that a every person in this world have some desires, some are in his hands some are not. The one which are not in his hands are his wishes. These wishes are reachable with strong efforts and some kind of ambition to achieve them.... VIEW ESSAY

It is always important to evaluate our abilities as a professional working in school. Improving ones self and assessing our progress is needed to always push ourselves forward. It is very easy to become complacent in a working environment so we must keep up to date with Continued Professional Development (CPD) so we can do... VIEW ESSAY

This movie was confusing from the beginning, Edward Teddy Daniels a previous World War II veteran whom suffers from Post-Traumatic Stress Syndrome and constantly has flashbacks. Shutter Island follows U.S. Marshall Daniels and his partners Chuck Aule while the investigate the disappearance mental patient from Ashecliffe Hospital for the Criminal Insane. Teddy requested the assignment... VIEW ESSAY

Because human-beings are such complex, psychologists had been trying to discover, understand and explain human behavior throughout the years by using different perspectives. Each of these processes address these matters somewhat at a different level although sometimes can be put onto the same context and by using making careful scientific observations. Some of the major... VIEW ESSAY