Ragging is a Crime

“Ragging is a verbal, physical or psychological abuse on newcomers to educational institutions. It is similar to the American phenomenon known as hazing. It often takes a malignant form wherein the newcomers may be subjected to psychological or physical torture. Sri Lanka is said to be its worst affected country in the world”

The delusion of Ragging is spread almost among every organization that is to be found today. Govt universities are the most affected parties, which will be focused further in this article.

Don't use plagiarized sources. Get your custom essay on
“ Ragging is a Crime ”
Get custom paper
NEW! smart matching with writer

There are many types of ragging, dress code ragging, playing the fool etc.

Ragging results in many outcomes some think it provides,
A sense of accomplishment, Helps you learn about yourself, Challenges you to develop coping skills, Makes you feel like part of the group, Develops close friendships with other new members, Prepare you for emotional challenges in life, Promotes self-discipline ,Allows you do to crazy things in a self accepted manner etc.

Unfortunately ragging is exploited into verbal torture and physical torture which are commonly known in Govt Universities.

Presently the initial stage is prevailed by making the new comers wear a certain dress code for a period of time some resulting to look humane/pleasant but some feel awkward and uncomfortable as it often brings them unnecessary attention then making hem memorize the name and hometown of their peers. which is actually common situation to increase the friendship among batch mates . (locally referred as batch fit)

Prior things are said to be tolerable upto a certain extent but this delusion unfortunately doesn’t end there , “playing the fool” which involves kissing a tree, proposing someone from the opposite sex and maybe upto public nudity often results in self embarrassment, then again verbal torture -indulging in loose talks ,singing of a vulgar or abusive song in the presence of a large number of peers, aliases are used primarily as a means of preventing the university authorities identifying the students who are involved in ragging.

The severest form of raging that could take place is physical torture, Freshman are forced to consume alcohol and various other substances. Some seniors are mainly interested in details such as the anatomical description of one’s body parts, his or her sexual interests etc. In many cases, the freshmen have been asked to strip before the seniors.

However, sexual abuse of female students remains rare. Outstation students who stay in hostels are most vulnerable to ragging. They may be asked to do odd acts such as having showers several times per day, and having showers around midnight with cold water. Some extreme cases like inserting candles inside lady-parts (as in the case of Rupa Rathnaseeli), putting testicles in a drawer and having it closed, pushing straightened out coat-hangers into ears, striking the man-parts over a long period of time (termed bonchi kadeema) are also reported. This period of time is termed Bheeshana Samaya in university jargon.

“Ragging is often used as a method to promote group loyalty and camaraderie through shared suffering.”
These ragging victims are currently only lead to Loss of friendships outside of the organization, Resentment towards current members, Exhaustion, Emotional duress from humiliation/intimidation, Decreased academic performance, Stress-related illness, Accidental injuries, Inflicted injuries, Physical pain, Depression or other mental health problems, Re-traumatization of past abuse, Severe intoxication (resulting in medical emergencies), Seizures, Maiming and finally Death. A tentative explanation from evolutionary psychology is that ragging can activate the psychological trait known as Stockholm syndrome.

These delusions has lead to many major catastrophes, below states some In 1974, ragging of some trainee mathematics teachers at the then Vidyalankara University (now University of Kelaniya) prompted Prime Minister Sirimavo Bandaranaike’s Government to appoint V. W. Kularatne Commission to probe the incident. As a result, twelve undergraduates were expelled and four officials were penalised for their failure to take appropriate action. This is the first major step taken against university ragging by a Sri Lankan government. In 1975, University of Peradeniya reported the first ragging related death when a 22-year-old female student of the Faculty of Agriculture, Rupa Rathnaseeli became paralyzed as a result of jumping from the second floor of the hostel “Ramanathan Hall” to escape the physical ragging carried out by her seniors.

It was reported that she was about to have a candle inserted in her vagina just before she had jumped out of the hostel building. She committed suicide in 1997 In 1993, Chaminda Punchihewa, a student of University of Ruhuna, died as a result of ragging. Prasanga Niroshana, a student from Hakmana, died as a result of ragging he underwent at Schools of Agriculture, Angunakolapallassa. In 1997, 21-year-old S. Varapragash, an Engineering student of University of Peradeniya, died from a kidney failure following severe ragging by senior students. A a first year female student of University of Ruhuna committed suicide in 1997 as a result of ragging In 1997, Kelum Thushara Wijetunge, a first-year student at the Hardy Technical institute in Ampara, died from a kidney failure after he was forced to do tough exercises and drink excessive quantities of liquor.

In 2002, Samantha Vithanage, a third year Management student at the University of Sri Jayewardenepura, who pioneered an anti-ragging campaign was killed at a meeting, while in a discussion on ragging. In 2006, Prof. Chandima Wijebandara, the Vice Chancellor of University of Sri Jayewardenepura resigned from his post as a result of students failing to comply with his orders to eliminate ragging from the university. In 2011, a female student attached to the Faculty of Humanities and Social Sciences, University of Ruhuna, was semi-paralysed in one limb as a result of ragging she underwent at the faculty canteen

Seeing closely at a person who might join in this “ragging” is that they suffer from “illusion of control”. They tend to share a personal distress of Jealousy or envy and a lack of personal and social skills to deal with such feelings, usually created by an unstable home environment. People with this vague state of mind is further explained in the Perfect Storm Theory Of Hazardous Hazing.

University students are also considered as citizens and are subjugated to the Common Law that prevails in the country. Accordingly, the constitutional constrains specified above are equally applicable to university students. Any form of civil or criminal offence executed by them are liable to be punished and in an instance of violation of such rights committed by university students, they shall be produced before the relevant Court and subject to suitable punishment that followed by the trial.

Internal clashes have erupted several times due to the friction between ragging and anti-ragging movements, best example being Samantha Vithanage, a third year Management student at the University of Sri Jayewardenepura, who pioneered an anti-ragging campaign was killed at a meeting while in a discussion about ragging. The Higher Education Minister S. B. Dissanayake has stressed that firm action will be taken against those who are found guilty of such activities in future and would be expelled from the university. In December 2011, he claimed that the levels of ragging has gone down drastically in the recent times and “only Peradeniya and Ruhuna are still affected by this ‘malaise’

Finally every person should realize that the this illusion of power lies only within the particular organization and in a couple of years they are driven into society and they will be accounted for their wrongs. Freshman should respect their seniors as well as the seniors should be in a state to accept it, as it has been said “Give respect to get respect”. After all we are all humans pursuing our personal/common interests while dealing with major/minor issues So let’s try making each other’s lives easier.

Ragging is a Crime. (2016, Apr 03). Retrieved from http://studymoose.com/ragging-is-a-crime-essay 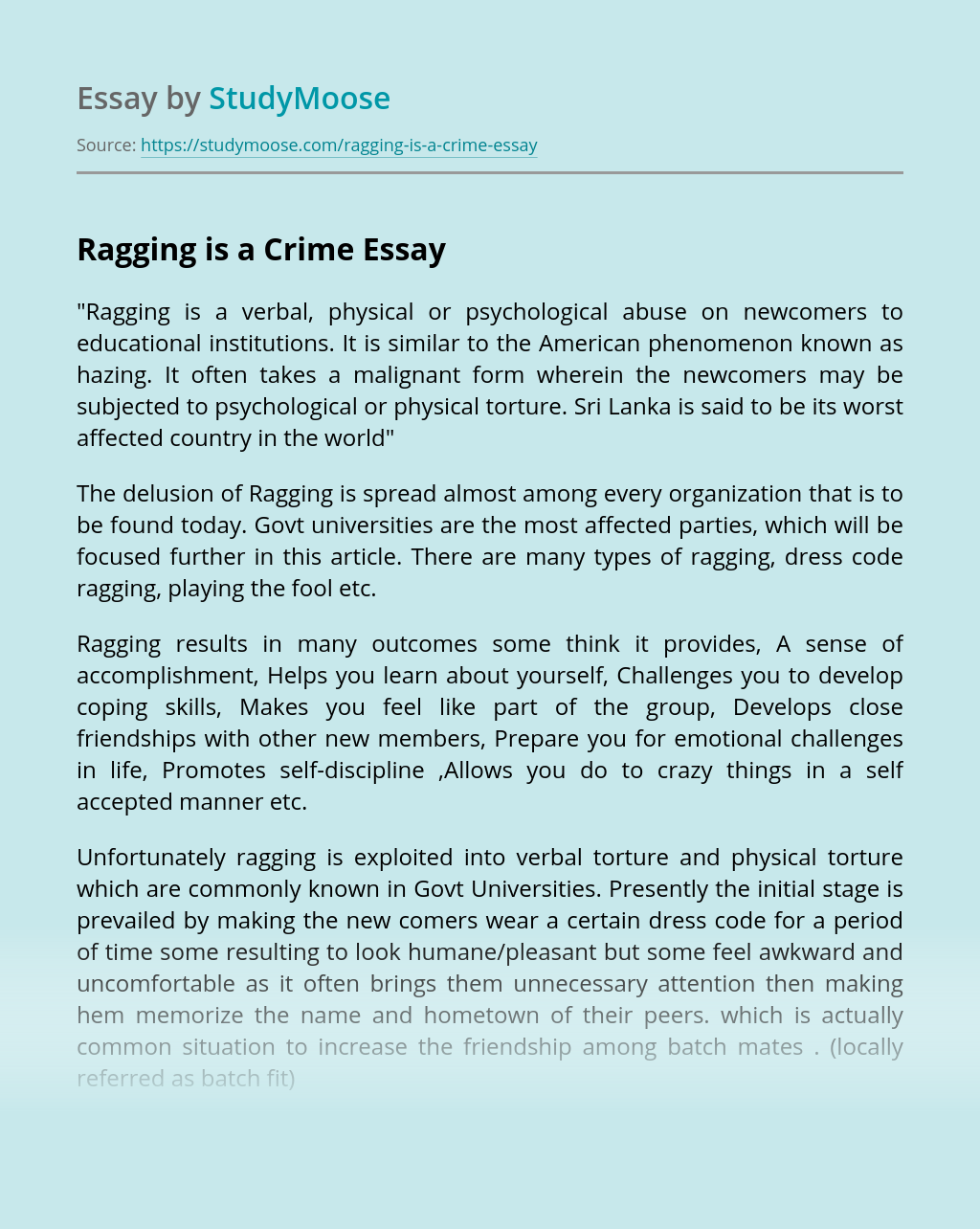